Time to take another look at a new starship for Star Wars Armada, this time for the Rebels.

Under the command of Jun Sato, the Phoenix Home was the nerve center of the fledgling Rebel fleet, and it makes its way to Star Wars™: Armada in the Phoenix Home Expansion Pack. What this small-base ship lacks in size and firepower, it makes up with its ability to command your fleet. Along with one pre-painted miniature starship, you will find two ship cards, ten upgrade cards, and all the dials, bases, pegs, and tokens you need to control the battle, more effectively coordinating your capital ships and fighter squadrons alike. 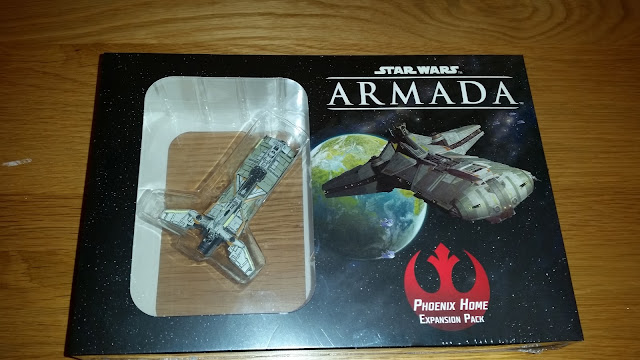 Lets pop her open and take a look at what we get to play with! 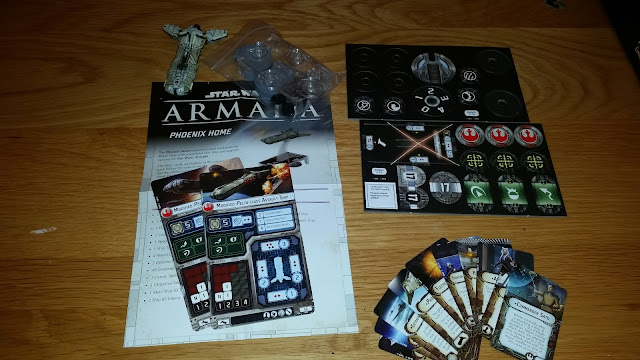 As with all FFG items for armada, you get all the tokens, ship stands, and plastic bits and pieces you need to field your ship, so you get plenty of token popping fun when you open her up, and cards to go through to decide on your build or help expand other ships too.  Take note wizkids with your recent Star Trek Attack wing releases... ALL the tokens.... 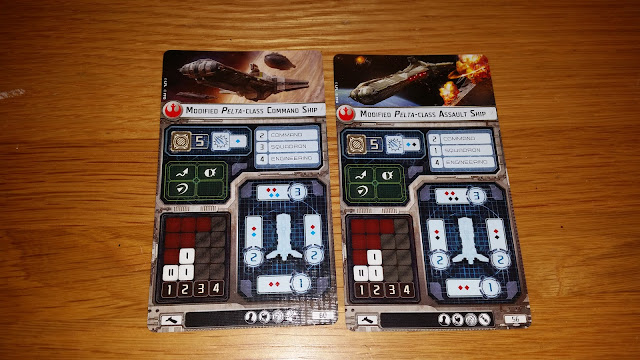 Starting as always with the two options you can take, either the Pelta command, or Pelta assault ship.  The assault ship is cheaper, and has more firepower up close, and anti squadron, but less squadron command, and this is not a ship you really want running by herself, as she's not exactly the fastest, and even at speed 2 her top end isn't very nimble, though if you keep it slow you can turn fairly well.
She has good firepower in her nose, with light batteries elsewhere, and most shields on her nose, so you want to keep it pointed towards the biggest threat.  She's not a combat vessel, though she can pop shots off at range happily, she's a support ship, there to help your squadrons, and other ships in the battle, whilst still contributing a good hull value, and to the front anyway some solid guns.  With her max speed only being 2 at least you do not have to worry about her out running her fighters. 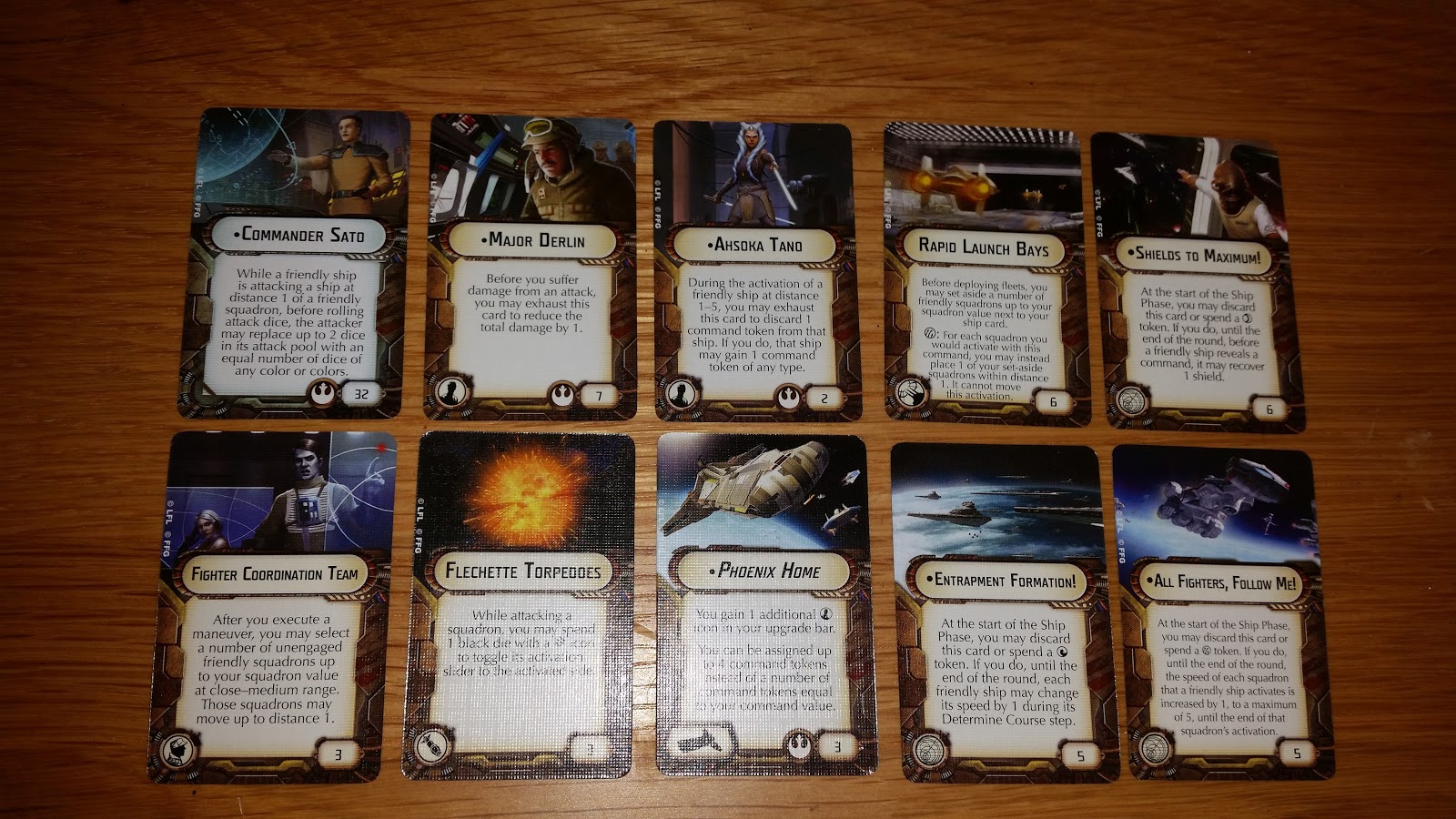 You do get a lot of upgrade cards in the pack though so lets take a closer look.....

Commander Sato is our new admiral option in the pack.  He lets you change your attack dice colours (very handy to swap out for powerful black ones when you can) when a ship that has a friendly squadron in range 1 attacks.

Fighter coordination team lets you select any number up to your squadron value of unengaged squadrons at close to medium range and move them up to distance 1, another good way to keep your ships moving and fighting.  Major Derlin can be exhausted to reduce the damage you take by 1, which is great as you can do this each turn as he refreshes, so he will certainly make his points back at the end of the game in keeping you alive.  Flechette Torpedoes are a solid addition to the assault variant and can tie down squadrons by spending a dice to have them activated, good if you want a dedicated AA platform.

Ahsoka Tano can help you by getting rid of a friendly ships command token to give them any type of token in range 1-5, very useful if you find you don't have the right one when it comes time to use it.

Rapid launch bays really adds another tactical level.  At deployment you can set aside squadrons up to the squadron value of the ship and then when you perfrom a squadron command you can choose to put them out at range 1 of your ship, though they can not activate this turn, its still a nasty surprise for your opponent, and great for the slower moving ships like B wings.

Then we also get a new type of card, the fleet orders.... Shields to maximum though costly at 6 lets each ship you activiate regain a shiled token, so if you have a fleet of 4 or 5 ships, this can again easily gets its point cost back, even though its a discard only.

All Fighters follow me is another one, you can either discard it, or spend a squadron token, and if you do each squadron the speed of each squadron a friendly ship activates is increased by 1, again great for those bwings!

Entrapment formation is another one, and again you can discard it, or spend a manouver token, and if you do, each friendly ship can change its speed by 1 in the manouver phase.

Lastly we have the ship title, Phoenix Home.  You gain an additional officer space, and can be assigned 4 command tokens instead of the usual 2, so great for stocking up on those commands you need to help move those fighters. 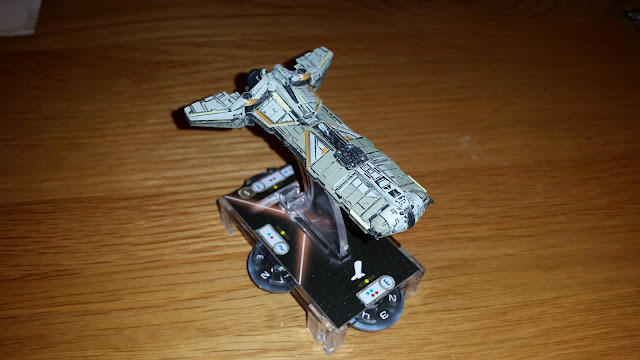 The ship herself, is like all the FFG Star Wars models, beautifully detailed, and well painted. 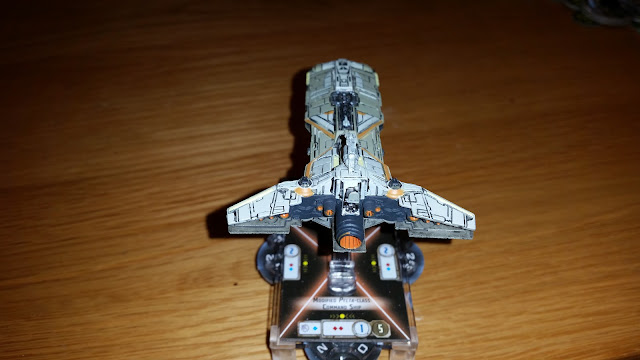 It has nice engine glow, and looks suitably worn out as I imagine Rebel vessels would, I mean they are too busy being space terrorists to spend time painting their ships all neatly right? 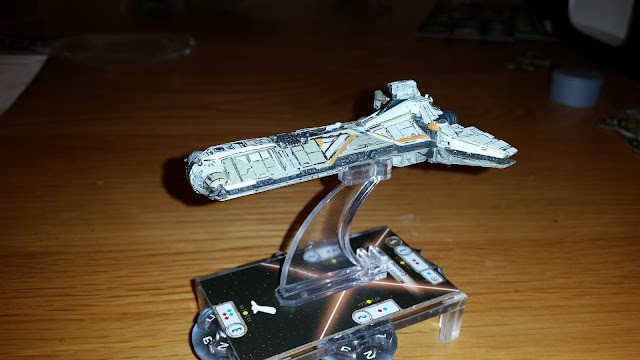 This is a great pack, so many things come in this to really shake up your game, and provide the squadrons with a big boost.  This ship can make squadrons very scary, deploying them when you do not expect it, having them move along with it easily, and fast too! shes a great ship to provide a new way to play, and with a nice fat escort of squadrons, will hit pretty hard too!

With an RRP of £28.99 you get a smaller ship that can still pull her weight, and really add to the way the way rebels play, and help you try new strategies with a solid support ship. so head on over to your local game store and grab yourself a pack.

Come and join us in all sorts of gaming chat in our Facebook group here, and come follow us on Twitter @rollyoursix and Instagram join the chat, and tell us about your games!
Labels: Armada Fantasy Flight Games Star Wars