Im a big fan of the game Star Wars Armada by Fantasy Flight Games, its an excellent tactical space battle game, so you need check it out if you have not. 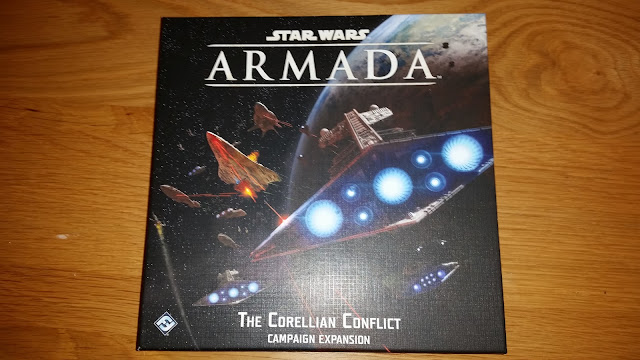 Fantasy Flight Games is proud to announce the upcoming release of The Corellian Conflict, an epic Star Wars™: Armada campaign expansion for two to six players!
The Galactic Civil War was not won in a single battle. The epic conflict at the heart of Star Wars saw countless skirmishes, waged in hundreds of systems and over thousands of planets. Even the ancient Core Worlds were touched by the spark of rebellion.
Soon, with The Corellian Conflict, you and your friends will be able to wage strategic battles for key hyperlane routes, seize vital shipyards, establish new bases, and decide the fate of the Corellian Sector. Working as teams, you will take sides with the Galactic Empire or Rebel Alliance, then meet your foes in battle for control of vital worlds. New campaign rules guarantee that your battles have long-term consequences, and the experience you gain from your victories may prove invaluable toward the success of your overall campaign.
Finally, The Corellian Conflict introduces new objectives and squadron cards for use both in your campaign and in standard play. The expansion's twelve objectives introduce new challenges and paths to victory. And its sixteen new squadron cards add greater variety to the squadrons from your Core Set, Rebel Fighter Squadrons Expansion Pack, and Imperial Fighter Squadrons Pack, allowing you to field them as some of the most legendary pilots and squadrons from the Galactic Civil War! 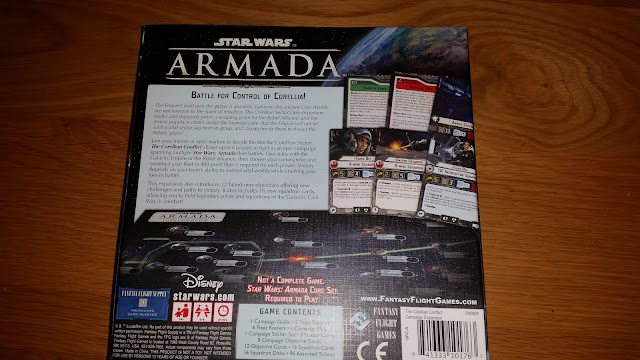 The dramatic events of The Corellian Conflict and your struggles for the Corellian Sector play out over multiple campaign turns during which you and your teammates meet your foes in games of Armada, or battles. These are fought at any of the twenty-five different strategic locations depicted on the expansion's map, and the results of these battles carry forward, reshaping the sector and your position within the campaign.

You may suffer damage to your ships, leaving them weaker for ensuing battles. You may gain resources with which you can repair your ships or add to their upgrades. You may even be able to add new ships to your fleet. At the same time, your unique squadrons and the crews of well-captained ships may gain veteran status, making them more effective in future combats. Or the damage they suffer may leave them scarred. It is even possible for them to meet their demise, and all those unique ships, squadrons, or crew who do fall in battle are removed from the remainder of the campaign.
Of course, you need to pay attention to the impact your battle will have on your fleet, but it is the success or failure of your bid for the Corellian Sector, itself, that will ultimately matter most. To this end, no matter whether you play as Rebel or Imperial, you need to mind the strategic importance of all the sector's twenty-five battlegrounds, and you need to determine the best time to make your play for any of them. These different planets, stations, and asteroid belts are worth varying numbers of campaign points when you assault one and destroy your opponent's base or outpost. Moreover, many of these locations offer advantages in the terms of strategic effects that you gain while you control them.

So whats in the box? and does this add anything a non campaign gamer may be interested in? 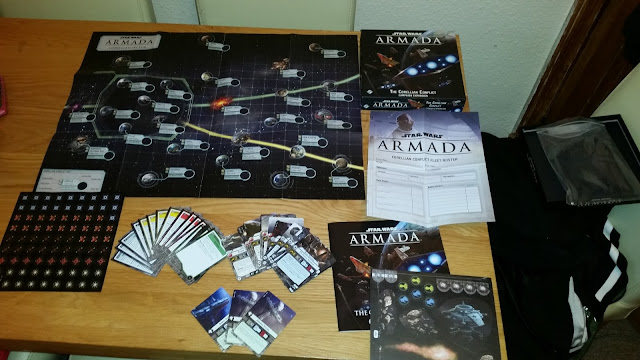 Well there is quite a lot for such a small box lurking in here.... we have a fold out paper mat, nice thick poster paper, with all the objectives and their bonuses on it for the campaign.  A sheet of stickers... im not sure on these, and that's just a personal preference, I am not a fan of using up resources so they can not be used again, but im going to just stick them to card and sut them out, so they can be placed on the map instead of stuck, but it may not bother you.

You get some roster sheets to writer out your fleets, and a manual guiding you through how the campaign system works, and you do need it as there are plenty of new things brought to the game, but it never feels too overwhelming which is nice.  All the locations are unique and offer something new and exciting to fight over, so this is really going to be quite intense.

You also get, and most excitingly to me new objectives for the core game! this has been much needed, and with a huge amount will really start to shake up your fleets, or let you customise them even more, this is really an excellent idea and much appreciated.  Along with new squadron variants of classic ships, like Rogue Squadron, and Biggs Versiosn for the Xwing, and a whole swather for other ships, including their matching bases its really going to mix up the fighter game by providing yet again even more options to choose from. 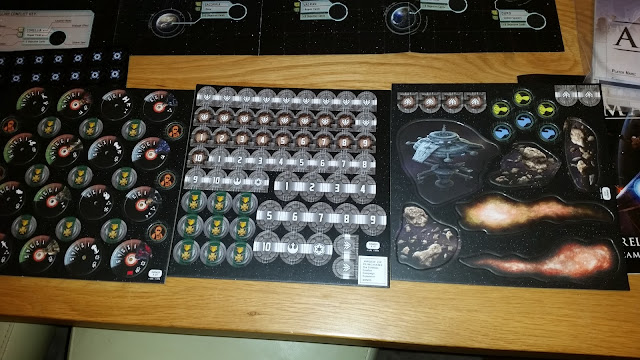 Of course no Fantasy Flight Game is complete with out a huge amount of punch out tokens, and this one certainly does not disappoint, it provides new bases for the new named squadrons, damage and vetern trackers for your ships, (yes they can become vets and increase abilities appropriately) and alos some new terrain to go down on the board for your battles as well.


With an RRP of £27.99 its excellent value for money for its campaign mode, additional squadrons and objectives to really spice up the core game, its a must have even if you dont want to play the campaign, which of course you should! so head on over to your local game store and grab it.
Come and join us in all sorts of gaming chat in our Facebook group here, and come follow us on Twitter @rollyoursix and Instagram join the chat, and tell us about your games!