Star Wars Armada is a great game, but tis not all about large ships of the line clashing, there are still small snub fighters and other ships darting in-between the ships during battle, and these are handled with squadrons.  When you get the armada core box you get the iconic Xwing and TIE, but we all know there plenty more fighters than that, and this adds a load more! 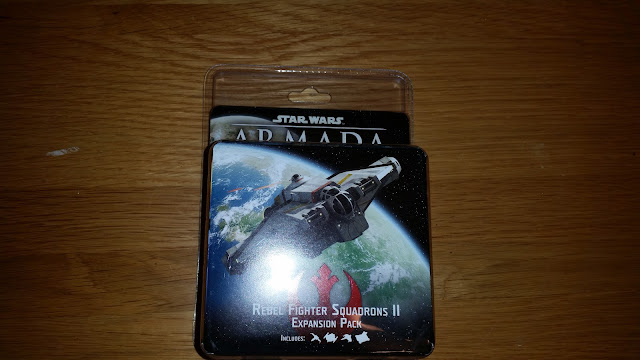 Rebel pilots are masters of improvisation, and you can bring their talents to your games of Star Wars™: Armada with the Rebel Fighter Squadrons II Expansion Pack. The venerable Z-95 Headhunter, agile Lancer-class Pursuit Craft, and sturdy VCX-100 Freighter lend new strength and tactics to your fleet, helping you win even the most desperate of battles. Together with the advanced E-wing fighter, these crafts add firepower and versatility to your Rebel forces, and their pilots carry the hopes of freedom for a beleaguered galaxy!

Lets pop it open and see what we get inside..... 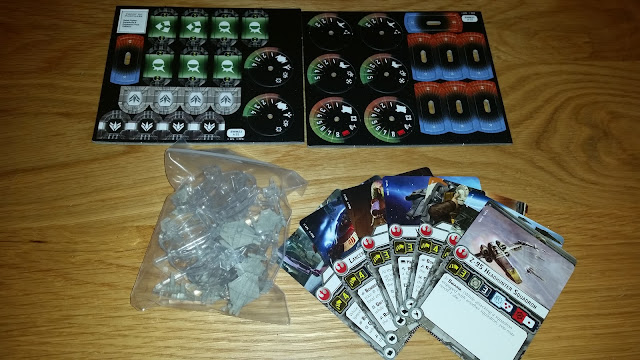 You are greeted by plenty of tokens, all the ones you need to create the generic version and the named squadrons for the game, plus stands, cards, ships etc.  All the stuff you will need. 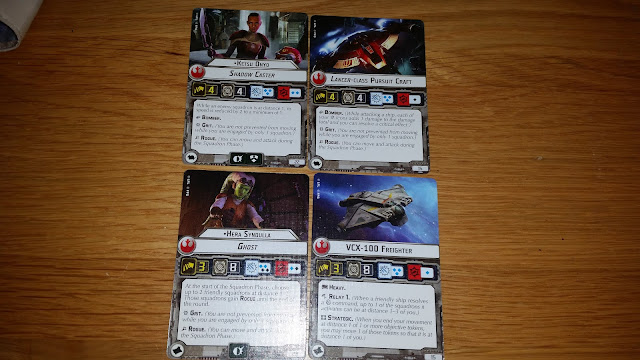 For each ship you get a normal generic squadron, and a named one led by an "ace"  Starting with the Shadow Caster you get Ketsu Onyo.  the ship is fast at speed 4, but low hull of 4 means you may need to be careful.  With an anti squadron of 3 blue, and anti ship of 2 blue she still packs plenty of firepower, and is a bomber so criticals count against ships.  With Grit (she cant be held up as engaged by only 1 squadron) and rogue (you can move and fire in an activation) she can cause plenty of havoc, and has some defence tokens to lessen he damage too.

The generic lancer class pursuit craft has most of the same rules, and a lesser firepower on the anti ship section, plus of course lesser points.  all in all solid choices for the cost.

Hera Syndulla brings the Ghost, at speed 3 she's not super fast, but has 8 hull to soak up some damage, and a solid mix of 2 black 2 blue anti ship, and one red one black anti ship.  gifted with grit and rogue, she will be hard to tie down as well.  She can also make 2 squadrons at distance 1-2 of her rogue as well, so great for having escort fighters for her.

The generic VCX100 is similar, less firepower though, and some new rules too....  Relay 1 is helpful when a ship activates a squadron token, as it lets the fighters being activated be in range 1-3 of you, so you can really throw out some surprises and extend your command range.

Strategic allows you to move an objective to range 1 of you when you end your move in range 1 of an objective, so you can switch its position, or almost pass it behind you, pretty handy for some sneakiness. 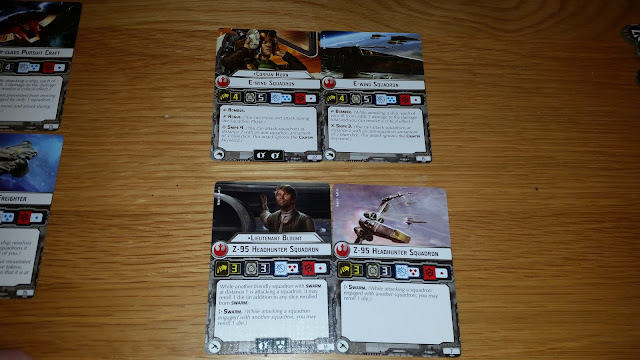 We get Corran Horn in an E wing squadron.  It has a move of 4, 5 hull, 4 blue anti squadron, and 1 red anti ship with bomber as well, and some defence tokens.  Corran also gets rogue, and snipe 4, meaning you can attack squadrons at distance 2, and ignore the counter keyword, very handy for well.. sniping out enemy units.  The Generic Ewing is less points and loses some special rules, but still keeps snipe, and bomber, has its anti squadron armament reduced to 3 blue dice, and its anti ship remains at 1 red.  for 15 points its a pretty good choice!

Lieutenant Blount is in a Z95 Headhunter squadron.  These are old ships, but none the less till battle useful.  Its a move of 3, hull of 3, so be careful they will go down quick, 3 red anti squadron, and 1 red anti ship.  It gets the rule swarm,  which is if you are attacking a squadron that is already engaged with another squadron you can re-roll a die, and Blount them gets an extra re-roll of another dice as well.

The generic version is so cheap, at only 7 points you can field a horde of these ships, it has the same armament, and the swarm rule, but of course loses Blounts 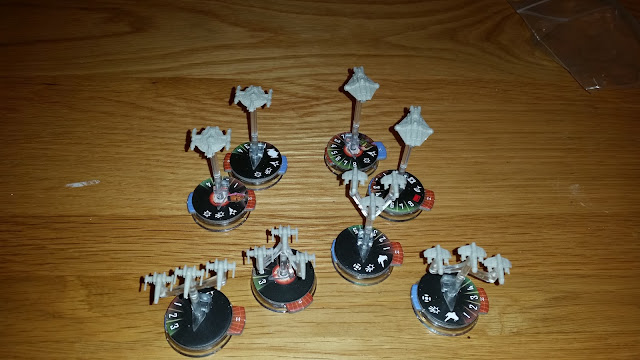 You get enough ships and stands to create 2 squadrons of each type and of course you can flip over the bases from generic to normal if you wish. 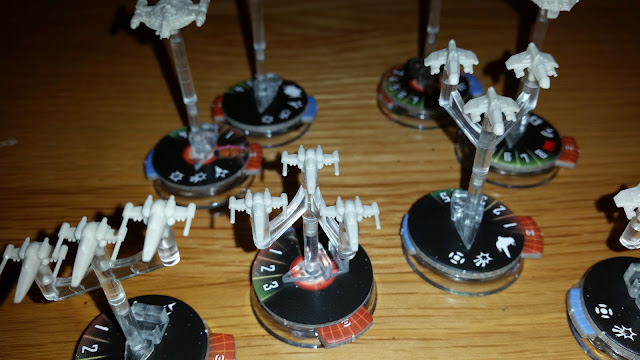 Though not painted sadly, the models are good for their size, I mean these are tiny 1cm or less often, so I'm impressed FFG managed to keep the shapes so well, so its easy to see which ship is which. 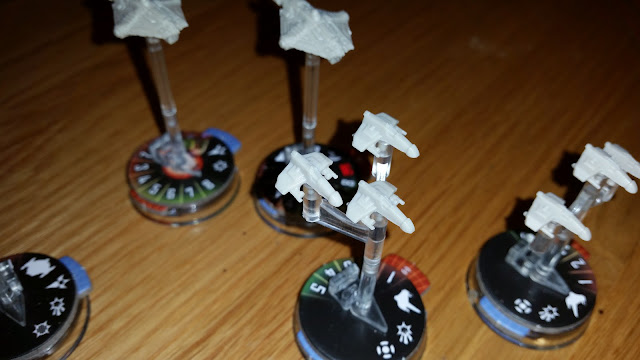 You could always paint the ships if you wish, though not something I think I will attempt, I may just try a wash on them though to see how it comes out.  Some of the larger ships have a surprising amount of detail for such tiny models. 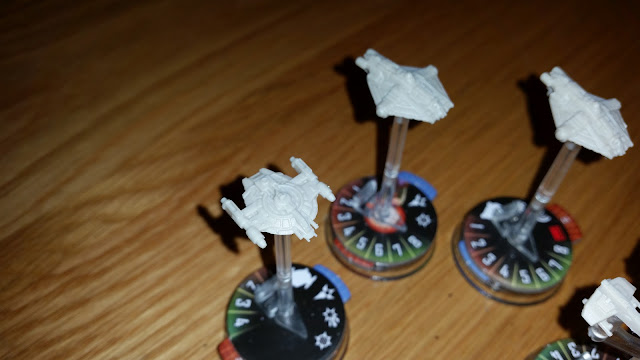 All in all its a great pack, it provides some new options for the rebels, with cheap fighters that wont last long like the Z95, and some elites with the E wing.  The larger ships having relay actions and other abilities that help your fighter controls can really help you theme a list.  I'm really looking forward to seeing the differences these new ships bring to the table.

The pack comes with an RRP of £18.99 you get a lot of smaller fighter squadrons, each with their own roll to help you try new tactics and builds in game, so head on over to your local game store and grab yourself a pack.