A Game of Thrones the Card Game, in my opinion the best competitive card game out there at the moment, and with the release of a new chapter pack, things always get a shake up....

“The Red God has his due, sweet girl, and only death may pay for life. This girl took three that were his. This girl must give three in their places. Speak the names, and a man will do the rest.” 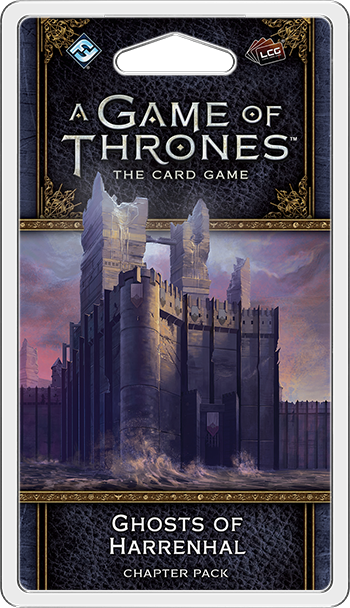 Fantasy Flight Games is proud to announce Ghosts of Harrenhal, the fifth Chapter Pack in the War of Five Kings cycle for A Game of Thrones: The Card Game!

The War of the Five Kings has utterly reshaped the face of the Seven Kingdoms. Though Joffrey still sits enthroned in King’s Landing, Stannis Baratheon is quickly approaching by land and by sea. Renly Baratheon has been assassinated, leaving the might of Highgarden temporarily leaderless. And in the Riverlands, the cursed and twisted stronghold of Harrenhal has passed back and forth between House Stark and House Lannister. Many have died within its walls. More will die before the war ends.

The Chapter packs will carry a nice balance of new cards, split among all the factions, and new plot cards.  The amount of varity each pack brings allows you to look at your deck again, and sometimes you will find a combo you hadnt noticed before, or one that actually works now, its a great way to change it, and depending on the plot inside your whole deck may be upgraded!

So lets see what cards are inside..... 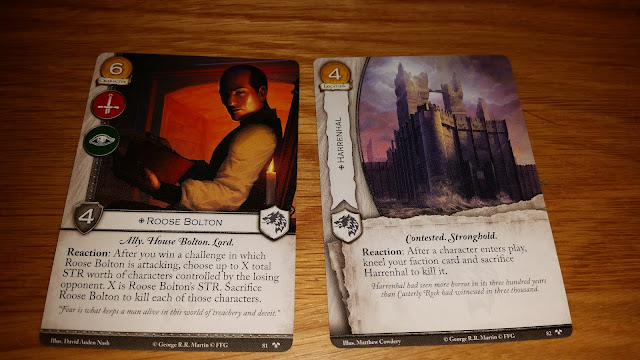 Starting with house stark we get Roose Bolton (booo hiss!!)  He is a 6 cost 4 strength character with military and intrigue icons.  his reaction works after you win a challenge he was participating in, and lets you choose X strength worth of characters controlled by the loosing side where X is Boltons strength and sacrifice him to kill them.  If you can pump up his strength he can take out some really big hitters, or wipe a board almost, so he does have his uses, and as all Stark fans know, he's a traitor so deserves it!

Harrenhal is a 4 cost Stark location that as a reaction lets you kneel your faction card, and sacrifice Harrenhal to kill it.  This is super powerful, you can just get rid of Tywins, or cards coming with a scary effect on them, and even its presence on the battlefield will make your opponent think twice about things 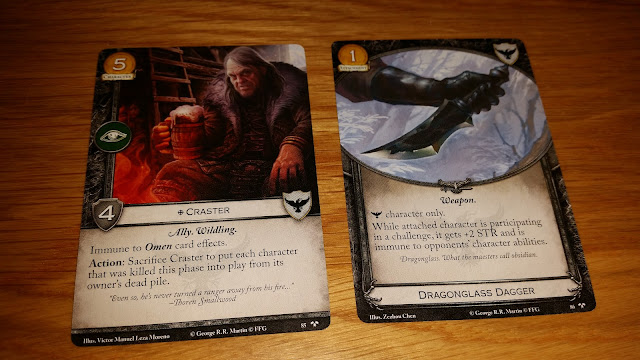 the Nights Watch get Craster, a 5 cost 4 strength card with intrigue, which is something they are sorely lacking in.  You can sacrifice him to put each character that was killed this phase into play from its owners dead pile, so if you take a beating you can get them all back again, very handy indeed.

Dragonglass Dagger is a 1 cost weapon attachment for Nights Watch characters only, and whilst participating in a challenge attached character gets +2 strength and is immune to opponents character abilities.  this can help you bypass things and cause the maximum damage, and for only 1 gold its well worth it. 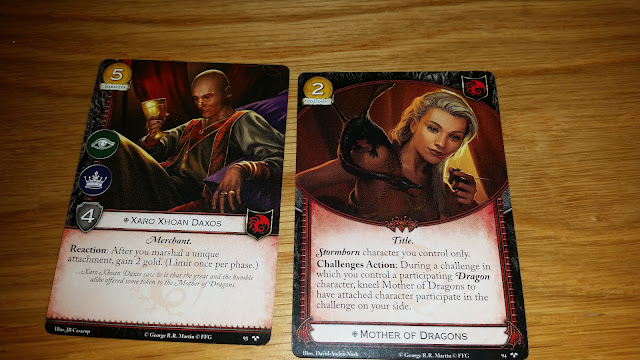 The Targaryens get Xaro Xhoan Daxos 9 a nice easy to pronounce one then!) who is a 5 cost 4 strength merchant character with intrigue and power icons.  He also lets you gain 2 gold after you marshal a unique attachment, which works very well with the other card they get in this pack.....

Mother of Dragons... a 2 cost title, and unique attachment for a stormborn character only.  during the challenge phase it gives you an action letting you kneel mother of dragons to have the attached character participate in the challenge on your side.  So if you put this on Dany, and use her earlier in the turn you can then use her again by kneeling the attachment to get maximum effect. 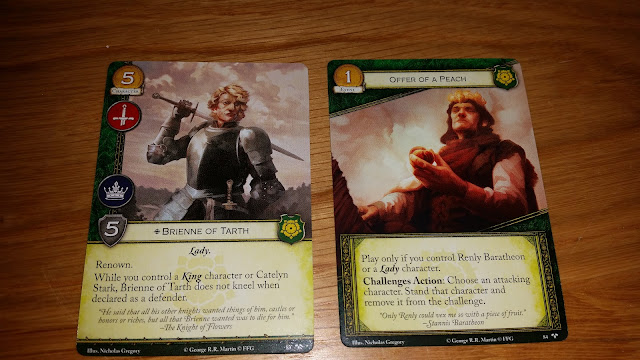 House Tyrel gets Brienne of Tarth, a 5 cost, 5 strength character with military and power icons.  She also has Renown so great for getting you more power too.  When you control either a king traited character, or Catelyn Stark in a banner deck she does not kneel when declared as a defender.

Offer of a peach is a 1 cost even that can be played only if you control Renly or a lady character, and in the challenges action it lets you choose an attacking character stand them and remove them from the fight, which can be handy for later on in the turn. Ritual of R`Hllor is an X cost event that after you win dominance can be used.  you can choose X standing rhollor characters, and they each gain a power, so its great way to go for the power, and power wins games! 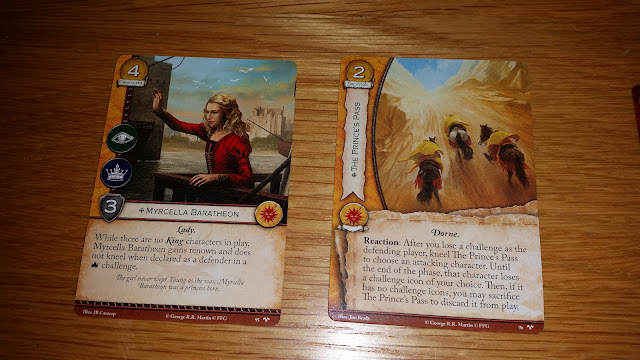 House Martell get my favourite art of the pack with Myrcella Baratheon, who is a 4 cost character with 3 strength intrigue and power icons.  Whilst there are no Kings in play she gains renown, and doesn't kneel defending power challenges, so she can be pretty useful!

The Princes pass is a 2 cost location that has a reaction if you lose a challenge.  You may then kneel it to choose an attacking character, and until the end of the phase they lose the challenge icon of your choice.  If it has no icons, you can sacrifice this card to discard it rom play. 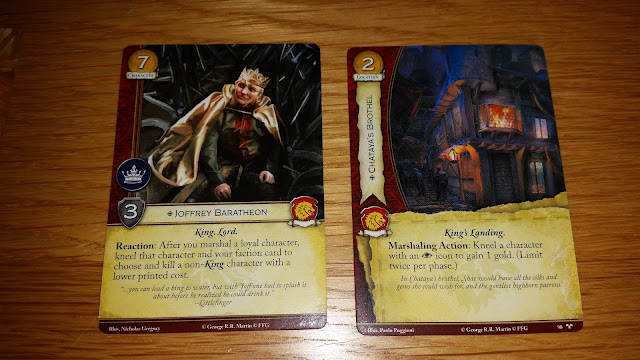 Onto my favourite house, the Lannisters!  We get Joffrey in his king phase.  He is very expensive at cost 7, with only 3 strength and a power icon, but he has a reaction that after you marshal a loyal character you can kneel them, and the faction card to choose and kill a non king character with lower cost, so he can become brutal killing a card each turn.

Chatayas Brothel is a 2 cost location that as marshalling action lets you kneel a character with the intrigue icon to gain a gold.  A Nasty surprise if you need that bit more coin then your opponent, and a good way to use low cheap intrigue cards if you need to as Lannisters have plenty of them! 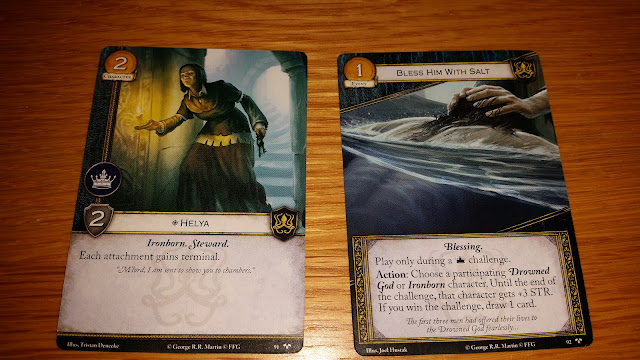 The Greyjoys get Helya, a 2 cost 2 strength character with power icon. She also makes all attachments terminal, meaning they get discarded instead of going back to your hand when the character is removed, this can certainly make  an opponent think twice about thwta they are playing, and when.

Bless him with salt is a 1 cost event that can be played only during a power challenge.  You get to choose a participating drowned god or ironborn character and until the end of the phase they get +3 strength, and if you win the challenge you get to draw a card too.  This is an excellent card, and will certainly help when you need it to. 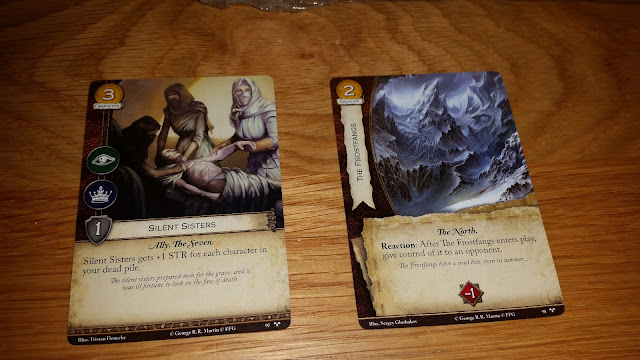 for the neutrals we get.... Silent Sisters... 3 cost, 1 strength with intrigue and power. so not much strength... but that changes... they get an extra strength for each character in your dead pile, so can become incredibly powerful later in the game, or well if you die a lot!

the Frostfangs are a 2 cost location, that gives you a minus 1 to your reserve, and when it enters play you give control of it to an opponent, so its giving them a minus 1 instead! 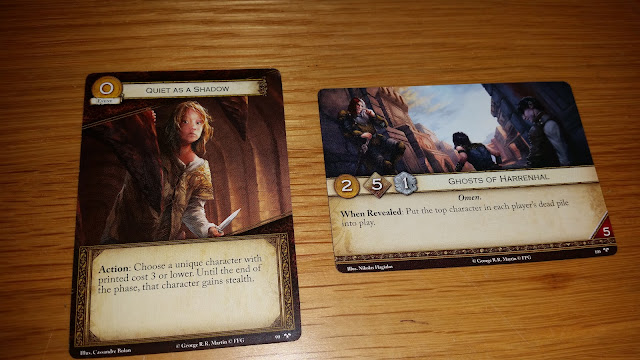 Quiet as a shadow is a 0 cost event that as an action gives a unique character of cost 3 or less stealth until the end of phase, very handy for a surprise challenge the opponent may not be able to do anything about.

Lastly we have a new plot card... ghosts of Harrenhal, which is 2 income, 5 initiative, and 1 claim, but when revealed puts the top character of each players dead pile into play, so great if you just lot a heavy hitter, but make sure your enemy doesn't get something too good back either!


This is another great pack, I always enjoy looking at the new options it gives to the houses, and with neutrals getting more every pack too, you can really start to theme and tailor your decks to your own personal play style.  Its good seeing new variants of old characters too as they progress through the story its only right their abilities should change.  There are certainly some things in here that are going to change my decks and I'm really looking forward to getting them out on the table to see, such as sneaking up the silent sisters to horrific power levels!


To learn more about A Game of Thrones the card game second edition take a look here
and check out our articles on Factions and plots to give you an idea of how they play, and take a look at some of the upcoming chapter packs that add more to your game.