Zvezda have once again come out with another great model, perfect for your Flames of War games, and its so cheaply priced as well.... but can it be any good? i mean compared to some makers £10-15 Tiger IIs, how does a £3 tiger II stand? Very VERY well in fact..... 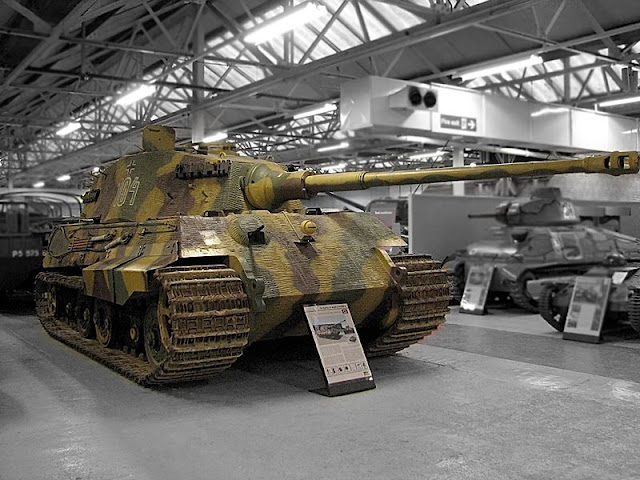 The Tiger II was the successor to the Tiger I, combining the latter's thick armour with the armour sloping used on the Panther medium tank. The tank weighed almost 70 tonnes, and was protected by 100 to 185 mm (3.9 to 7.3 in) of armour to the front. It was armed with the long barrelled 8.8 cm KwK 43 L/71 anti-tank cannon. The chassis was also the basis for the Jagdtiger turretless tank destroyer. 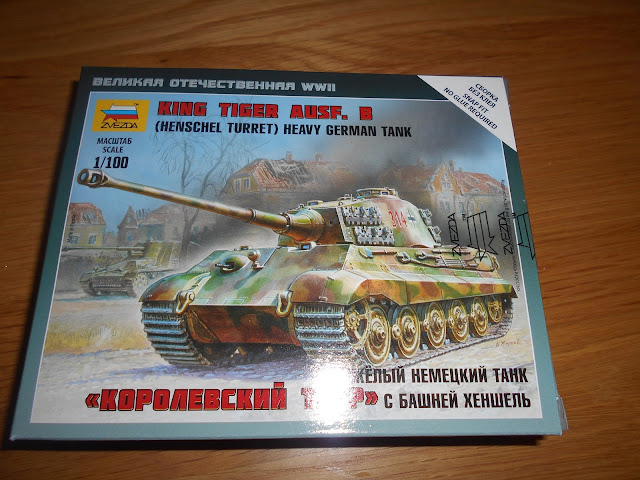 The Tiger II was issued to heavy tank battalions of the Army and the Waffen-SS. It was first used in combat with 503rd Heavy Panzer Battalion during the Allied Invasion of Normandy on 11 July 1944; on the Eastern Front, the first unit to be outfitted with Tiger IIs was the 501st Heavy Panzer Battalion, which by 1 September 1944 listed 25 Tiger IIs operational 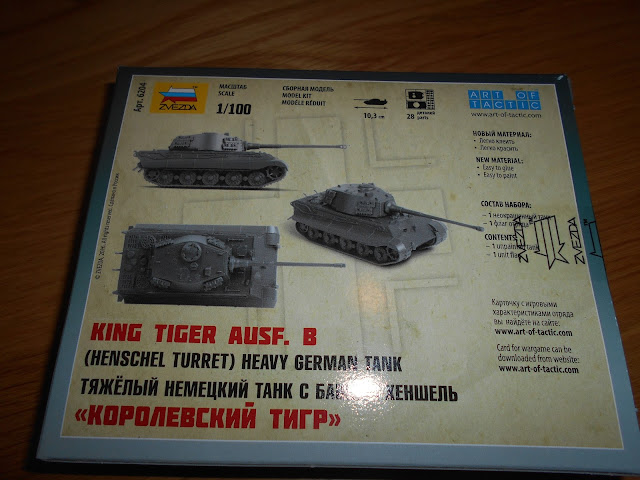 The heavy armour and powerful long-range gun gave the Tiger II an advantage against all opposing Western Allied and Soviet tanks attempting to engage it from head on. This was especially true on the Western Front where, until the arrival of the few M26 Pershings in 1945, neither the British nor US forces brought heavy tanks into service. A Wa Prüf 1 report estimated that the Tiger II's frontal aspect was impervious to the 122 mm D-25T, the heaviest although not the best penetrating tank gun on the Allied side. On the other hand, an R.A.C 3.d. document of February 1945 estimated that the British QF 17-pounder (76.2 mm) gun, using armour-piercing discarding sabot shot was theoretically capable of penetrating the front of the Tiger II's turret and nose (lower front hull) at 1,100 and 1,200 yd (1,000 and 1,100 m) respectively although, given the lack of a stated angle, this is presumably at the ideal 90 degrees angle.  As a result of its thick frontal armour, flanking manoeuvres were most often used against the Tiger II to attempt a shot at the thinner side and rear armour, giving a tactical advantage to the Tiger II in most engagements.  Moreover, the main armament of the Tiger II was capable of knocking out any Allied tank frontally at ranges exceeding 2.5 kilometres (1.6 mi), well beyond the effective range of Allied tank guns. 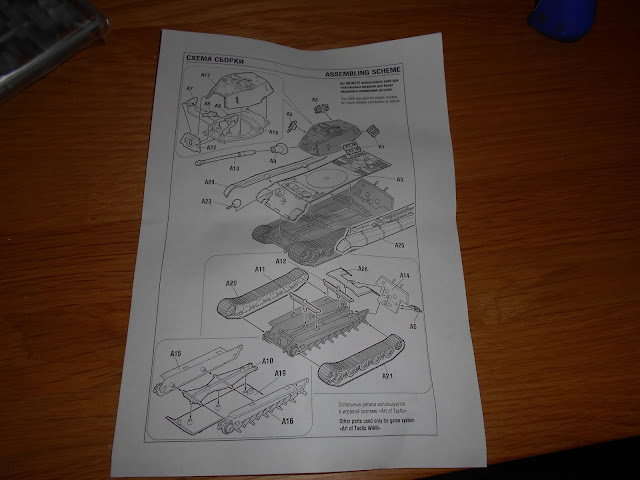 This kit comes with an instruction sheet, that is certainly more detailed then most of the Zvezda ones, but do not be scared, it all goes together easily and nicely, nicer then a lot of Early zvezda Kits for sure. 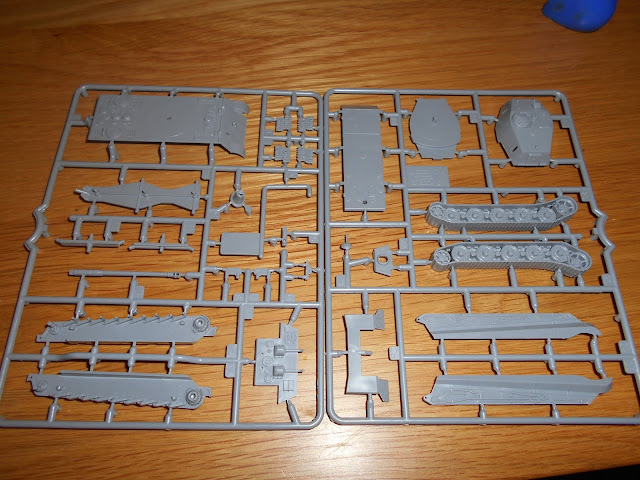 The parts come on two sprues, and are detailed, and good quality plastic, not real cleanup was needed, just the odd bit of filing down clipper marks.  The build time was only about 15 mins or so, building the turret seperatley and letting bits dry and building the hull.. and flicking between them. 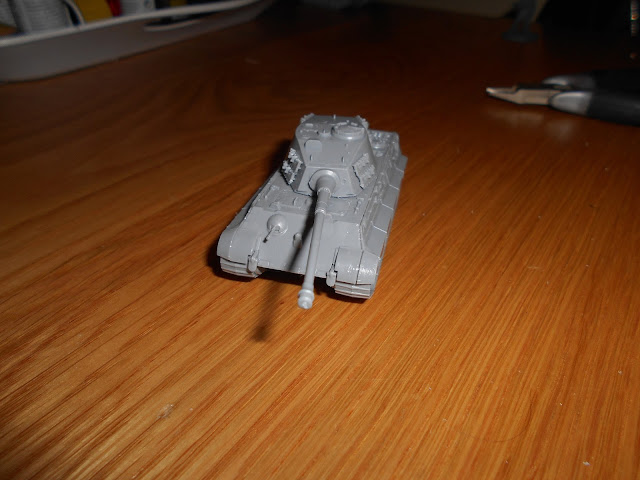 When she was all built i was VERY happy with the results, really looks the part, and full of details. 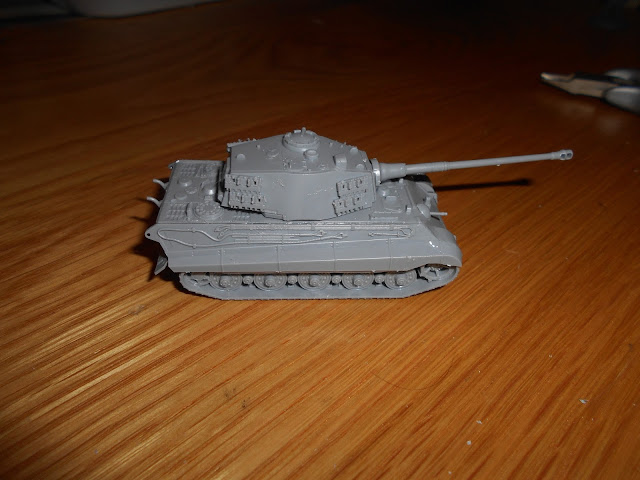 For a kit of this price the detail level is very impressive, with tow hooks, ropes, extra track armour for the turret, and other details. 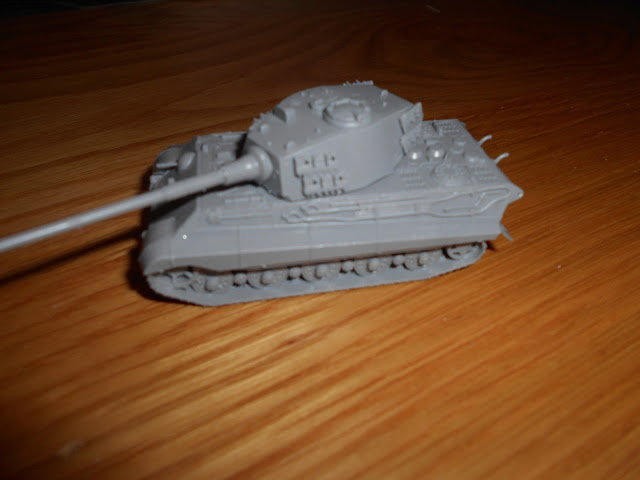 Once she is painted up she is going to look great! and be a great addition to the panzer arm.  Another bonus compared to resin and metal models is the weight, she is so light, and when you have a lot of models to transport it makes a difference. 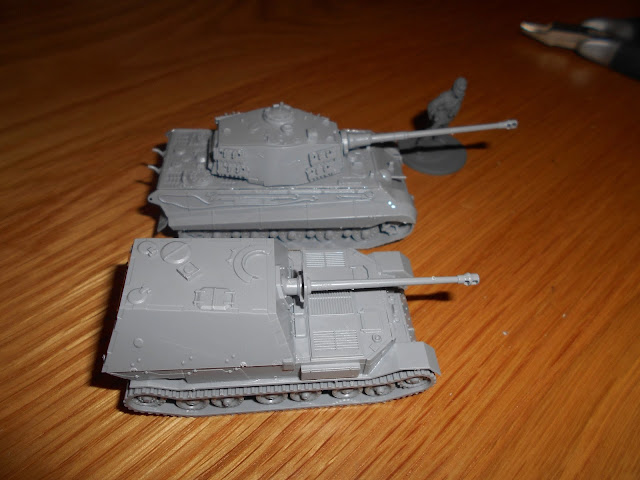 Next to the Elephant, and a 28m figure for scale, yes shes a beast.... in game terms, in history and in model form, i cant recommend this kit highly enough!!

I picked mine up at arcane scenery and models my favourite online model store, great prices, great service and always happy to help and advise!