I do enjoy a good card game, with my favourites for multiplayer being A Game of Thrones LCG and my favourite solo card game being Lord of the Rings the LCG, though are a whole gambit of excellent card games to play out there.  When I come across a new one, it needs to have good mechanics, and a draw, either a solid theme, or artwork.....

Now Ascension, is an already established game, but this is a stand alone box that you can learn and play from, and combine with other sets too.  It has its own background and world... but will that or the art be good enough to draw you in?

Ascension: Realms Unraveled is a deck-building game in which players acquire cards from a central pool, then place those cards in their discard pile to be shuffled into their deck for later use; creatures also show up in that shared card pool, and players can combat them to earn victory points (VPs) and possibly other benefits, such as the ability to remove less useful cards from their deck or to banish cards from the pool that others might find useful. The game ends once all the available VPs have been claimed or the shared deck of cards runs out. 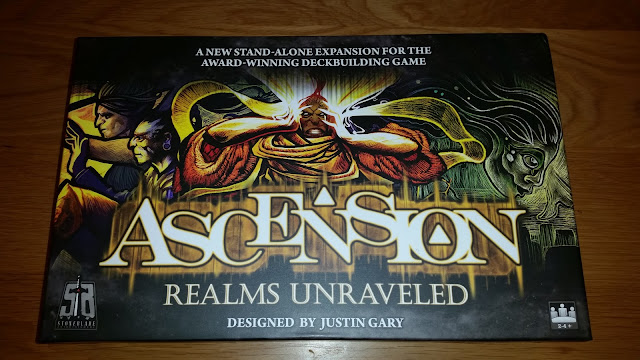 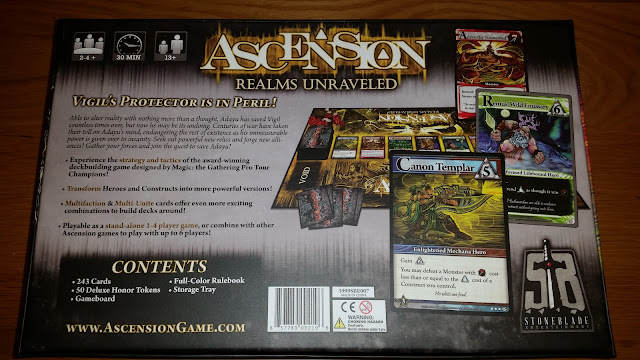 You get a good amount of stuff in the box, a hard playing board, plenty of cards too.  It states 2-4 players, but this can be played solo very easily and includes solo rules.. so already a good sign for me!  30 min play time, seems about right from games I have played, they can go quicker or about that, rarely longer though.  Ages 13 and up again seems ok, Olivia isn't so interested in the card games, it means she has to read a lot, though she does enjoy watching them and helping where she can.

Lets pop it open and take a look inside! 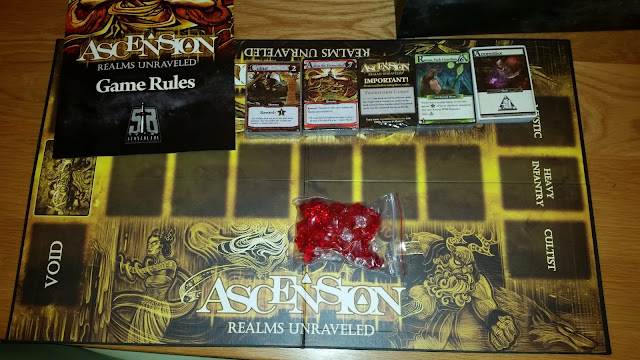 Inside the box you get a load of cards for the game, some rather cool plastic honour tokens that come in red and white for 5, and 1 denominations respectively, and rather nice fold out solid board, and a full colour rulebook, that gives you all the information you need to play, very clearly laid out. 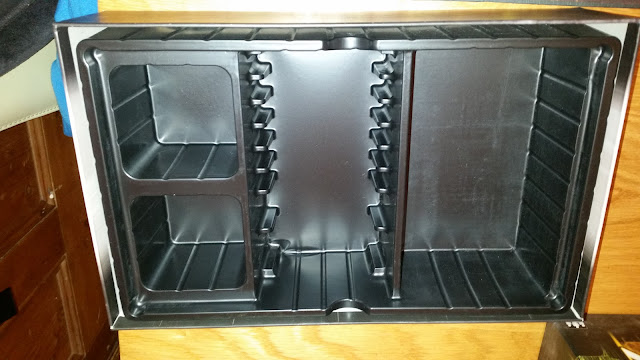 Avery nice touch is the storage insert in the box, its set so you can fit all your cards in, and have plenty of space for other expansions too.... Fantasy Flight Games could learn a thing or two from this for sure! Its a great idea for all games to keep your tokens separated. 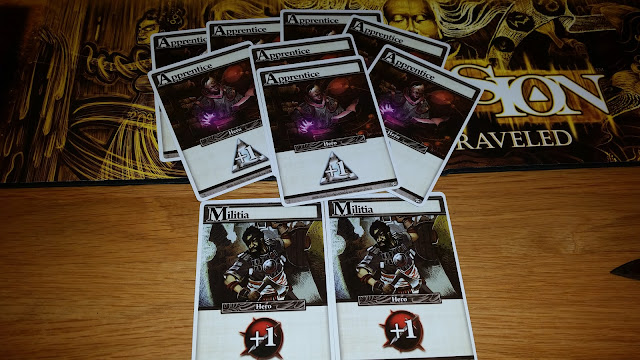 Unlike the games I mentioned earlier, this is more of a deck builder game, where you start with a limited pool of cards, and purchase ones to add to your deck as you go on.  You begin with generic Aprentice cards, and Militia cards, Militia give you an attack value, that can be used to defeat creatures to add to gain honour and any effects from them, whilst the Apprentice gives you purchasing power that lets you buy more expensive cards that ad more power to your own deck. 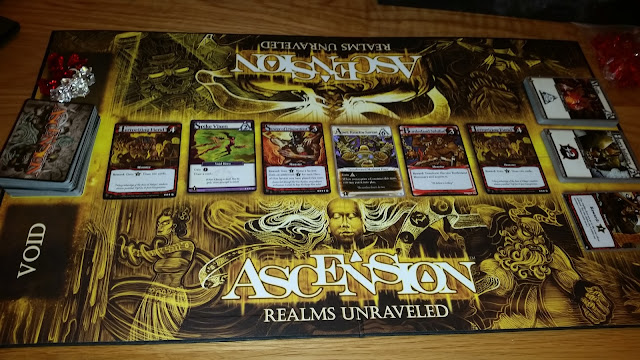 Once set up you have a set of generic cards on one side you can buy, or attack for honour gains in the case of the cultist, and then the main deck row... these get added to as cards are defeated and purchased.  Each turn you draw up to 5 cards, and play them, there is no limit to how many you play, presuming you can afford things, or fight that is. 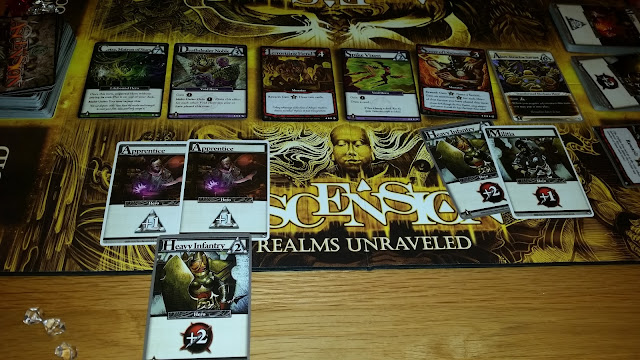 Here I have used the 2 apprentices in my hand to buy a heavy infantry card to add to my deck to give me some more combat power, and used a heavy infantry and a militia to defeat an enemy so I can gain some honour, and the cards ability.  The idea of the game is to be the firs player to reach 30 honour. 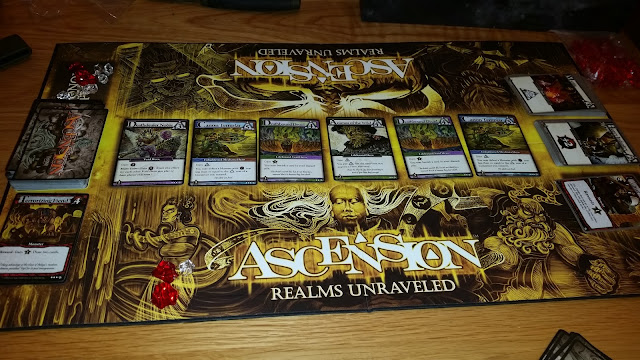 The game provides a surprising amount of tactical options, as cards are available for all players to buy, so you need to judge how desperately you may want a certain card, as some work really well in combination with others, or do you want to slay beasts to get your honour going nice and quickly. 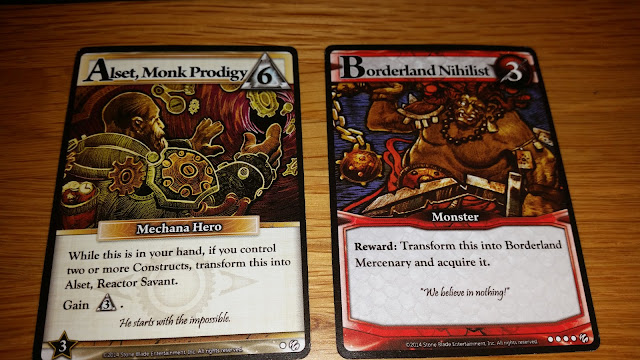 Some cards can evolve, by flipping over and changing into another form like these above, when you fulfill the requirements they 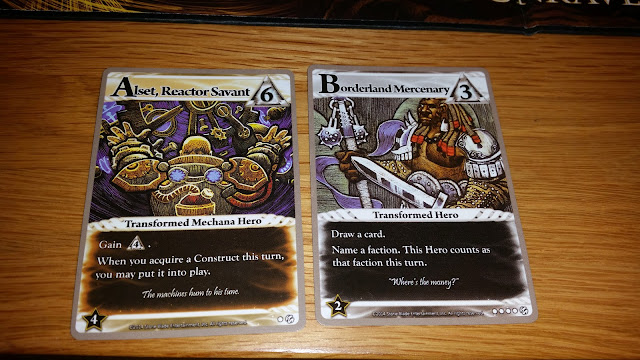 They flip over to very powerful versions to give you even more variety in game. with more varied abilities.  All of the abilities are fairly self explanatory, and any you may struggle with are all clearly described in the rulebook. 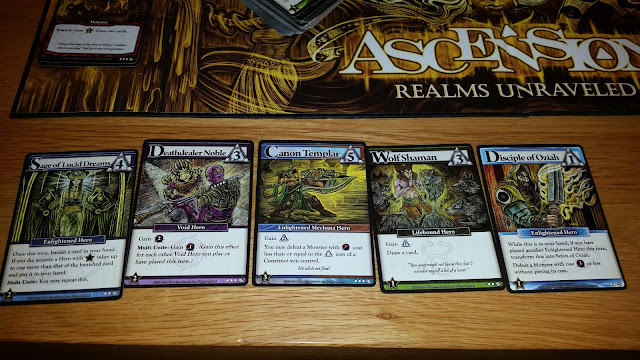 The art style is very distinct, and may not be to everyone's taste, but is consistent in this set, and the more time I spend with it the more I like it, it reminds of the 90s, not in a bad way, just the sort of games we would see then.  Its a simple in approach game, but there is a huge amount of depth with the deck building combinations, and constructs you can have out on the table, so there is a lot of replay value, and a lot of choices to make, so no game should be the same of it.  Its one of the easier games as well to introduce to a new gamer.

The fact the game also has a great solo mode, where you are playing against the cultist is a huge benefit.  Each turn the cultist gets the end two cards on the row, and they all slide up before refilled, and its the first to get to 50 honour, you or the cultists that win.

Its a good game, its fun to play, doesn't take too long, is a pleasure to get out and pack away due to the great box control, and has plenty of expandability in the future should you wish to.  The art is lovely old school style and something you do not really see in most games with its line drawing style.

You can pick up your own copy from your local game store and give it a try! with an RRP of  £33.99 it shall provide you a good amount of entertainment.

If you liked this, you may like Marvel Legendary Villians for some more solo and coop deck building action, so take a look.