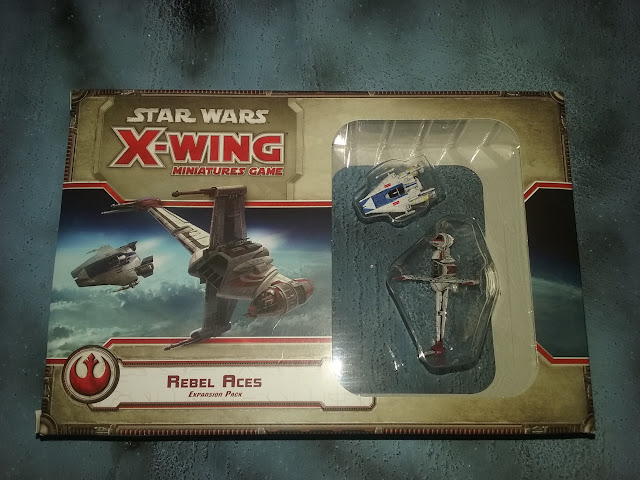 So what comes in the pack? and is it worth getting if you already have the ships? lets take a look and see.... 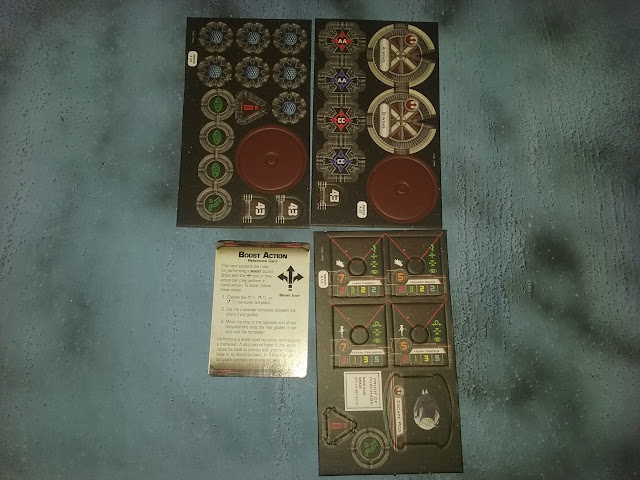 You get plenty of high quality tokens, enough for both ships, and some that relate to the scenario that comes in the pack.  Yes this pack comes with a scenario, and this makes me happy, as I wish they did what Star Trek Attack Wing does and include a mission with each ship. 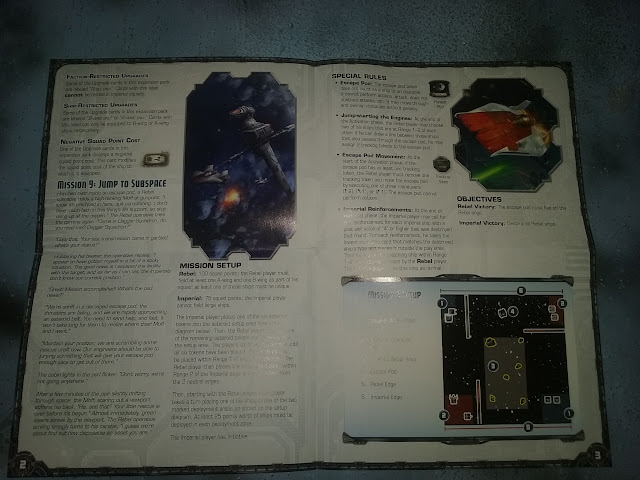 The mission sheet clearly lays out the setup, and forces used and how to use the included token in your games, this is nice as it is a change form the usual set up 6 asteroids and go for it. 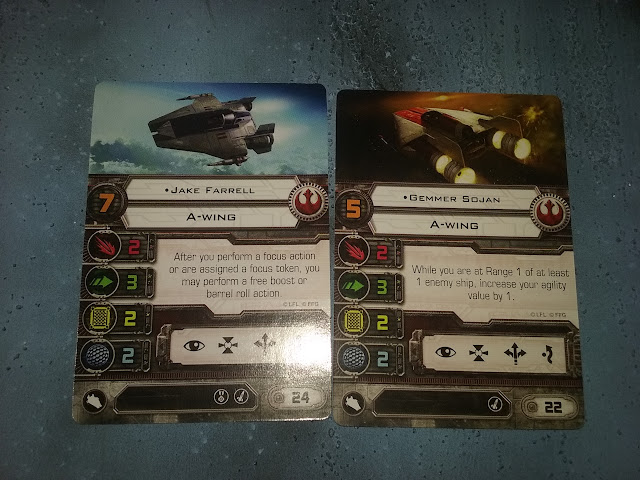 We get tow new Awing pilots.  Jake Farrell is skill 7and his action lets you do a free boost or barrel roll after you take a focus action, or are assigned a focus token.  Gemmer Sojan at skill 5 increases your agility by 1 when you are at range 1 of at least one enemy ship. 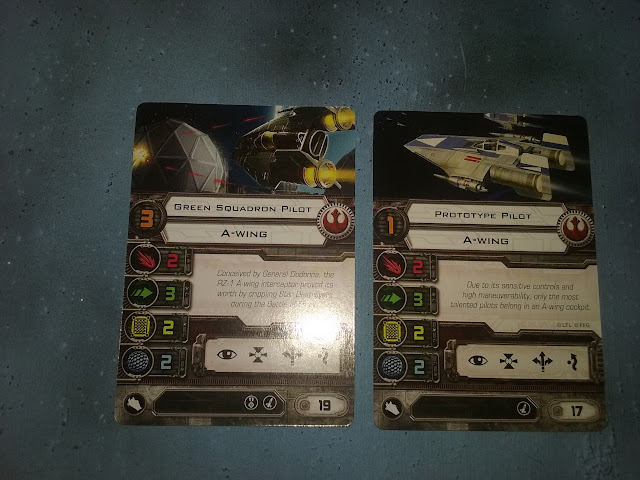 You also get another Prototype pilot, and green squadron pilot so you can run the generic ships. 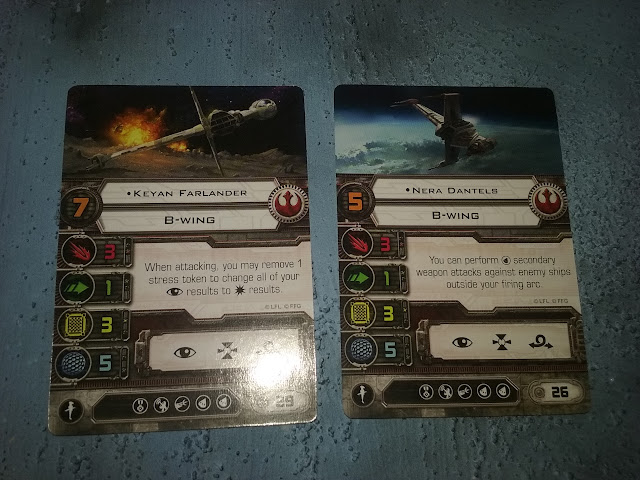 For the Bwing we get Keyan Farlander, he is skill 7 and lets you remove a stress token from yourself to turn your focus results into hits.  This means he can K-turn and pull those red manoeuvres and still get the equivalent of a focus action making him effective at hitting hard.  Nera Dantels is skill 5 and she lets you use torpedoes in a 360 firing arc potentially providing a nasty surprise for those that are on her tale, or think they are safely out of arc. 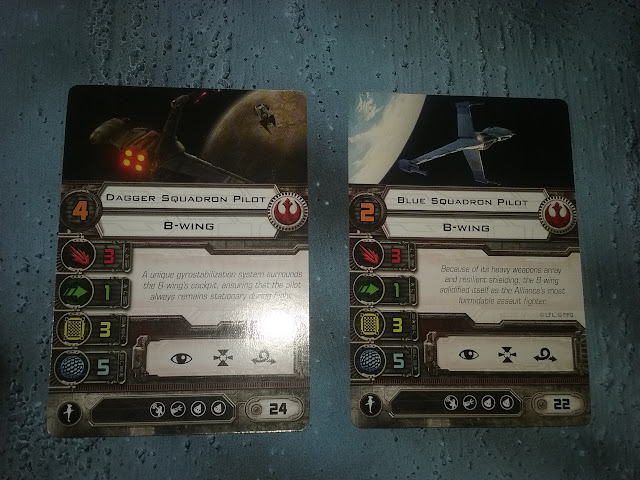 Blue and Dagger squadron pilots round it out to provide the generic options for you. 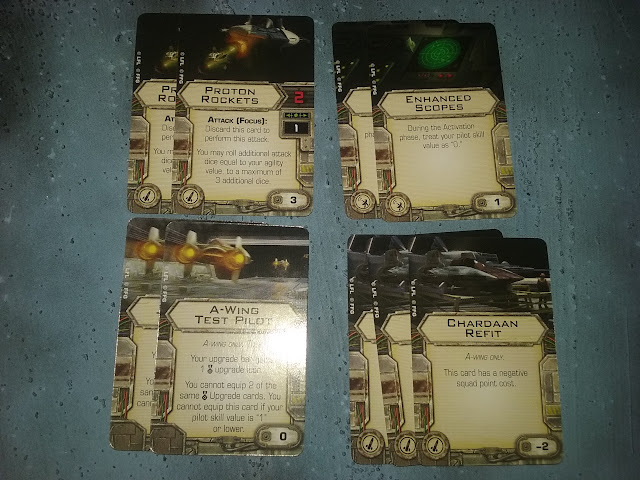 You get two copies of the above upgrade cards, which is nice as it allows you to use them with the ships in this pack, and the original versions as well.  Proton Rockets are a cheap missile upgrade at 3 points for a two attack weapon that works at range 1 only.  2 attack you may think is worthless when your main weapons will be firing more at range 1.  Well that's where it gets interesting.  You roll an extra attack dice up to 3 based on your agility, so on an Awing this becomes a 5 attack weapon making them very nasty up close.  Enhanced scopes are a system upgrade that treat your pilot skill as 0 dueing the activation phase, meaning you move first, and shoot first.  Awing test pilot is a free upgrade title that only can go on Awings.  It adds an elite talent to your upgrade bar, which is handy to get some skills on your pilots, or even give them two elite talents, though you can not give them the same one twice.  Chardaan refit is a negative points upgrade, so it saves you 2 points when you attach it to your Awing, though it does take up your missile slot.  Its useful if you are running Awings with out missile upgrades. It also means you can get the prototype pilot with no upgrades for a mere 15 points, which is a bargain. 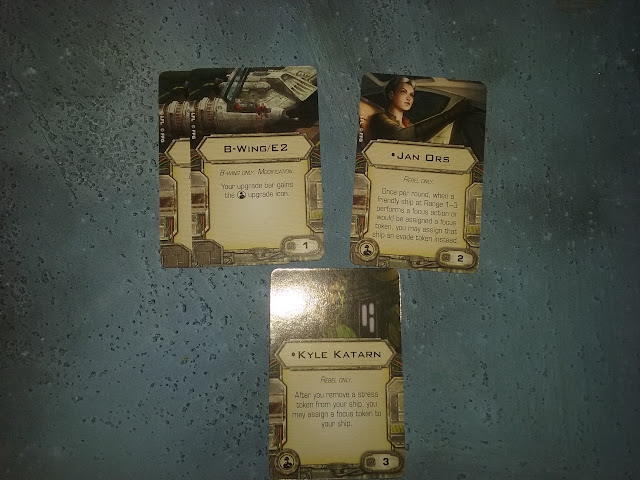 You also get 2 copies of the upgrade card B-wing/E2, which for 1 point adds a crew slot to your Bwing.  You also get Jan Ors as crew, for 2 points when a friendly ship at range 1-3 takes a focus action you can swap it for an evade, which is handy as the Bwing does not naturally have one.  Kyle Katarn, apart from having an awesome beard lets you assign a focus to your ship after you remove a stress. 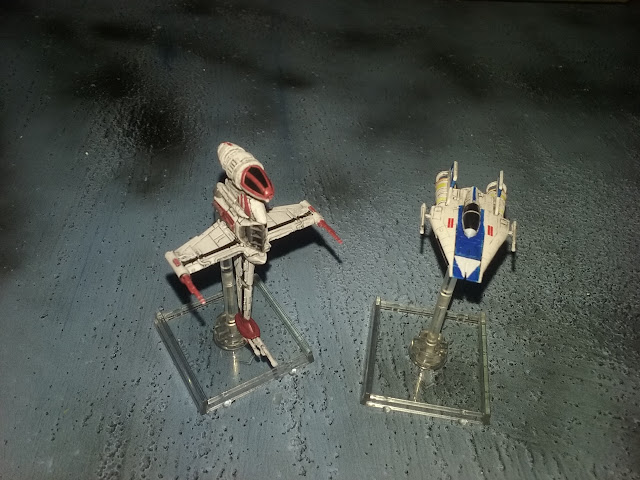 The new paint jobs are nice, its good to have some variety. 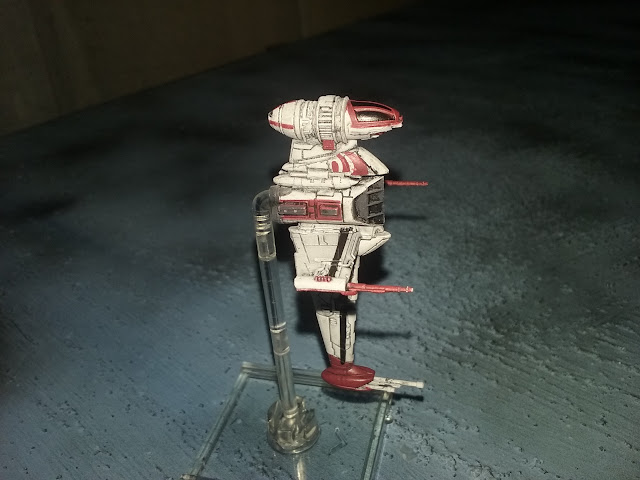 The Bwing looks great as always, less grimy then the normal one with a new scheme. 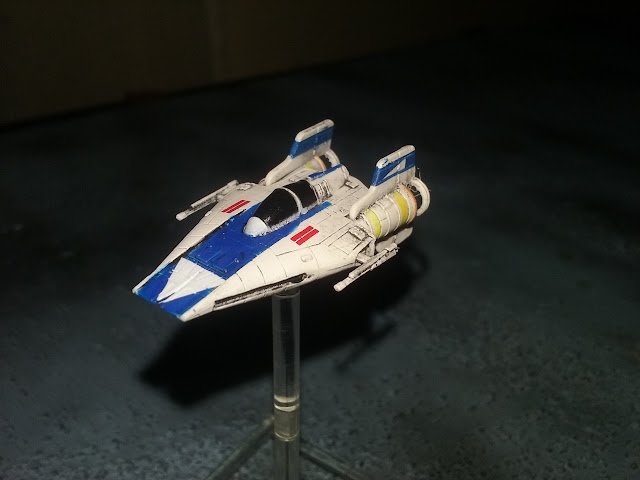 The blue Awing looks awesome, and will make a nice addition to the fleet.


Its a great pack to get, and adds a lot more to the normal A and B wing versions, so well worth picking up, new upgrades, new pilots, new paint jobs.... yes, its a good pack, with lots of new tactical options to try out.