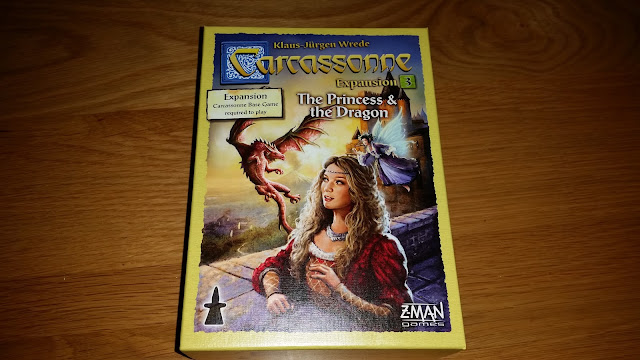 In this third major expansion for the prize-winning Carcassonne, we move into the realm of fantasy.
The land around Carcassonne is being visited by a dragon, making life very difficult for the followers. Brave heroes venture forth to face the danger, but without the aid of the fairies, their chances are not good.
In the city, the princess seeks help from the knights, and farmers build secret passages to move about undetected by the dragon.
Contents: 30 new tiles with dragon nests, volcanoes, magic gates, and princesses; 1 large wooden dragon; 1 wooden fairy, but sadly from Olivia's point of view no Princess meeple. 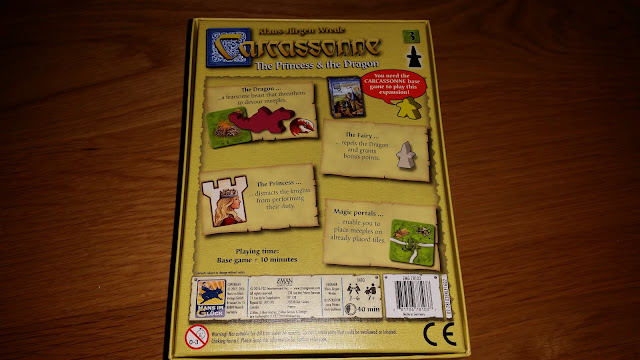 The boxes art is lovely, really like it, and it gives a very clear description of what you get int he box, and the basics of what it does. 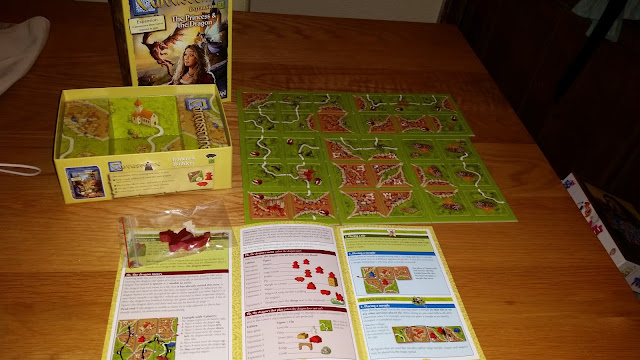 Inside you get a nice rules sheet explaining the new mechanics, 30 new tiles, and your new wooden meeples. 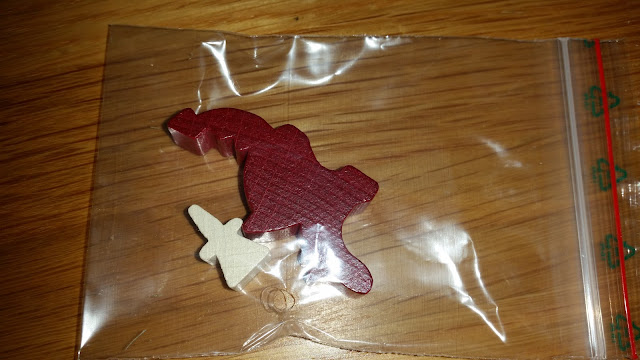 We get lovely wooden meeples for our Dragon, and Fairy, more on how the Dragon works later.

How does our Fairy meeple work? well whenever a player takes a turn placing a tile, but does not place a Follower, he may instead place the Fairy on a tile alongside any one his Followers. The Fairy has 3 effects:
1 – The Dragon may not visit a tile where the Fairy stands, thus she protects and wards off the meeple munching Dragon.
2 – If a player starts his turn, and the Fairy currently resides on a tile with one of his Followers, that player immediately scores 1 point.
3 – When a city, road, cloister, or farm which contains the Fairy is completed, the player whose Follower stands on the tile (with the Fairy) scores a 3 point bonus.

So its really useful to gain some quick points or protection, but remember all players have access to moving the Fairy. 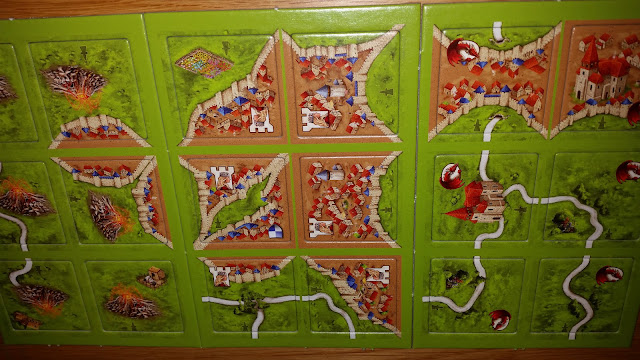 There are several new tile types, such as the  Volcano. It is placed according to the rules of Carcassonne. However, a player may not place one of his meeples on this tile. Instead, the Dragon appears and flies from his lair to land on this newly placed tile.

You may pull a tile with the Dragon pictured, which is then placed according to the Carcassonne rules. A player may also play any one meeple to this tile. The game is then paused, while the Dragon moves. Beginning with the player who placed the Dragon tile, the Dragon is moved to any adjacent tile (never diagonally). This continues (clockwise) around the table with each player moving the Dragon to a new tile until he has changed positions six times. Whenever the Dragon tromps his way across fields, through cities, over roads and cloisters landing on a tile that contains a Follower, that Follower is devoured (and removed from the board). After his six steps, the Dragon waits where he stands until either a new Volcano tile is drawn (which whisks him away to a new location) or 2) another Dragon tile is drawn (which allows him to take six more steps).  This adds a real element of unpredictability to the game.

When a player draws a princess tile, it is placed according to the normal rules. If the tile is placed so that it connects to a city containing one or more meeple (Knights), the player placing the tile removes one of those Knights, as clearly an attractive princess, is far too much for the knight looking after the City to resist. 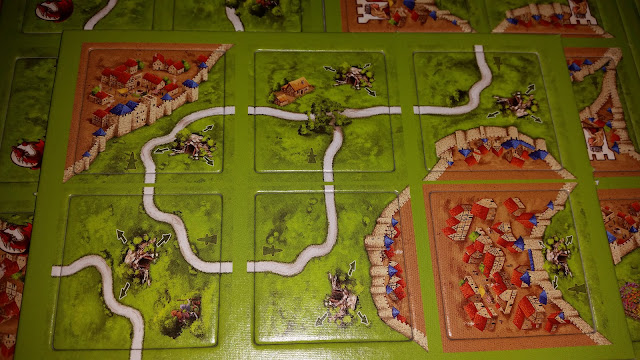 When a player draws and places a Magic Portal tile like above, he may place one of his Followers on this tile...or any other spot on the board (keeping in mind all rules for placement). In this way, if the Dragon has removed an opponents’ Follower from an unfinished city, for example, the player placing the Magic Portal tile may automatically transport one of his Followers across the board to take possession of that vacant unfinished city and steal those hefty points!

So... what do I think of this? well it converts your normal medieval game of Carcassone into somewhat of a fantasy adventure, providing more variables, and more randomness, and in my opinion... more fun too! I really like it, and of course with it being an expansion its optional, so if you do not want the craziness it provides you can just play the game without it, but if you fancy diving into those classi c princess and dragon stories, this si the expansion for you!!  The new eleemsnt change things up nicely and bring some more player interaction to the game by trying to have the dragon eat your opponents meeples.

I really like this one, the dragon is cool.... and the Fairy.. but I wish there was a wooden princess... Its fun when I make the Dragon eat dads little people.

You can pick up a copy with an RRP of £17.99 from your local game store and join in the fun.