The Westcountry, in particular Plymouth has a strong and old naval tradition, so its no real surprise I have a love of naval games, the age of sail in particular.  There was a darker side to those times too, with wreckers, and smugglers and treasure hunters, and this game focuses on the wreckers in a small portable fast paced multiplayer card game. 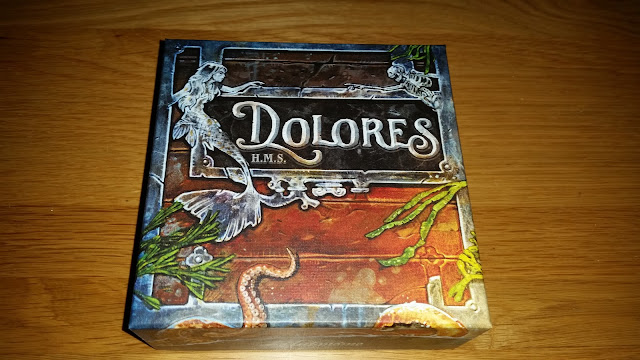 Merchant vessels traveling by sea have successfully been used to carry exotic goods between nations for hundreds of years. Seafare is not only is the fastest and most efficient way for the transport of goods, but it also exposes the citizenry of trade-rich nations to novel and fascinating new products. Merchants willing to brave the risks and send their ships out to discover, trade, and deliver cargo to other nations can reap these sizeable financial rewards. Unfortunately for these merchants, they have more to worry about than the tempestuous seas or navigational mishaps. Several enterprising individuals have banded together to waylay these merchant ships and seize the cargo for themselves.
These shipwreckers light signal fires along the rocky coast to lure in unsuspecting merchant ships. These ships soon find themselves wrecked upon hidden rocks and hazards. Once a ship crashes there, its cargo will often wash ashore—right into the waiting arms of the shipwreckers. Of course, even the must industrious independent operations have occupational hazards, and shipwreckers are no different. Should two rival shipwrecking crews reach a crate at the same time, they must find a way to agree (or not) as to how the loot should be divided. 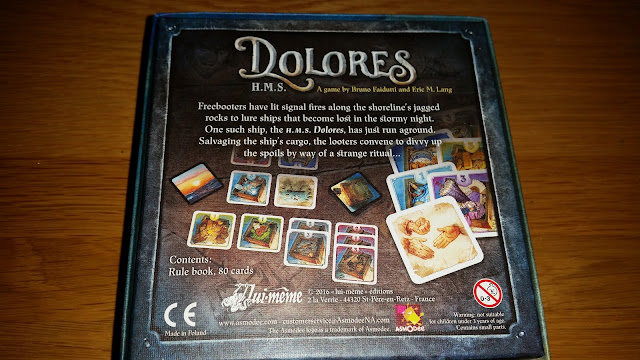 Tonight, one such merchant ship traveling from Cardiz, the HMS Dolores, has been buffeted about in a vicious storm. Following the lure fires of the shipwreckers, the Dolores has crashed and broken on the rocks of Breton. Crate after crate are now washing ashore, just waiting to be seized.
In HMS Dolores, a fast-paced card game designed by Eric Lang and Bruno Faidutti, two to four players take the roles of these rival shipwreckers, competing to recover as much loot as possible from the shore-bound wreckage of the Dolores.
The cargo up for grabs is represented by cards of seven different suits, each signifying a different type of loot. Each player or shipwrecker’s crew begins the game with four cards face-up in front of him or her, organized by suit. Then, negotiations commence as the shipwreckers decide whether to Fight, get First Pick, or make Peace with rival crews. Once the sun rises, the shipwrecker with the highest score wins the game!

The game plays 2-4 players, and they say 20 mins, but we have had games done in 10 so it does play quick, and is also really suitable for any age group to enjoy.

Lets crack it open and peek at the treasures inside...... 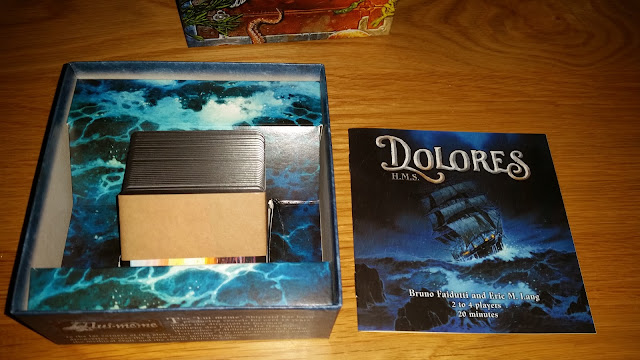 You don't get a huge amount inside, but then you do not need to for the type of game it is, you do get a set of lovely nice quality cards, and a rulebook with glorious artwork on it. 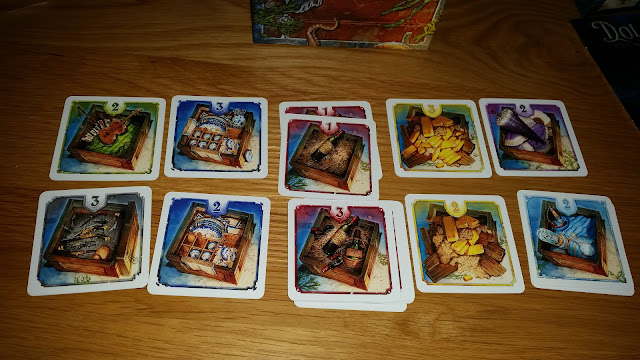 At its core, its a set collection game, where you try to build stacks of the same good, as at the end of the game you are scored for you largest, and smallest stack, so you need to think carefully about what cards you want.  The cards represent all sorts of goodies that could be "salvaged" from a ship wreck, ranging from bullion, to wines, to perfumes and other things too, oddly musical instruments!. Why anyone would want to salvage bagpipes is a shock to me.  Each of the cards has a points value in the top nice and clear to read. 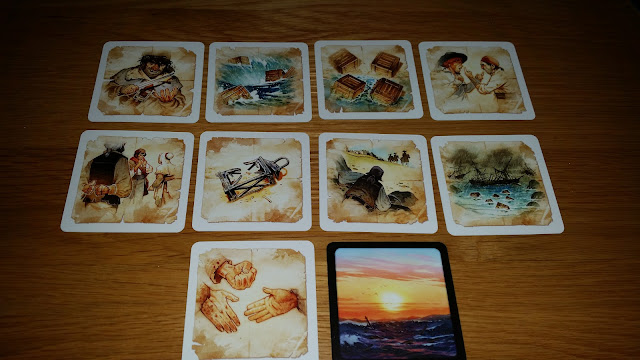 There are also a set of event cards that are all explained in the rulebook that have different effects such as cancelling a players choice, or bringing out fresh goods, these can be mixed in or not if you choose, but they do add a new layer of fun for you to explore. 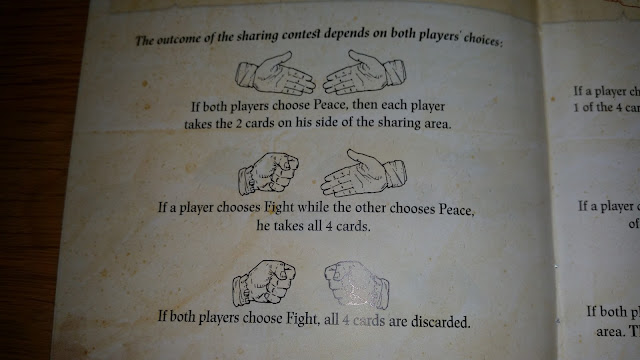 You set the game up by dealing out 4 cards to each player, which form their initial "stash" and then dealing two facing you and two facing another player (this is for the two player game) Then on a count of three you initiate of 3 hand signals.... either holding your hand out as if to shake hands which means peace, a closed fist, which means fight, or a thumbs up which mean first pick.  Each of these has a different effect depending on your opponents choice, as you can see in the pictures. 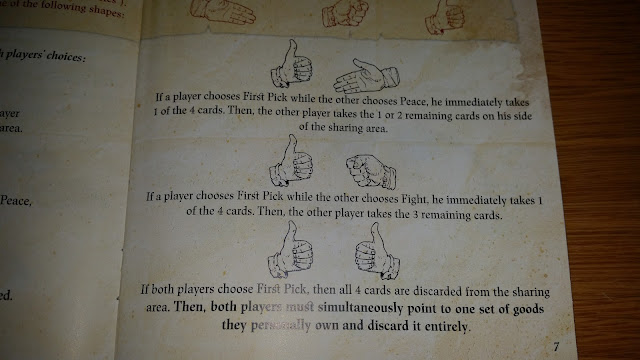 Its handy to have these pages open in the book for your first few games, but after a few you will be well away, and it does not really slow the speed of the game down at all. 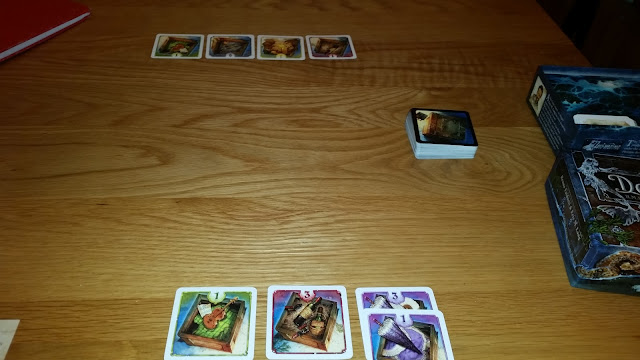 Here we have our game set up with our hordes.... 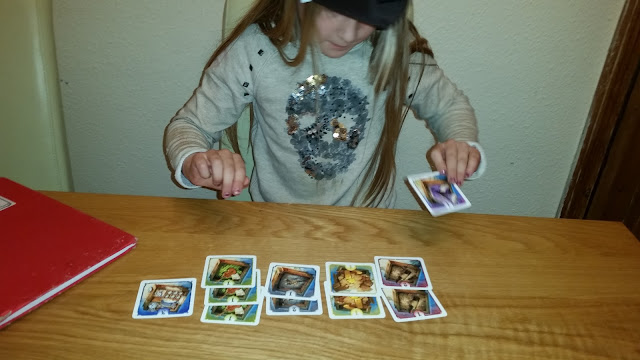 Any excuse for Olivia to wear her pirate hat as she continues to increase her horde. 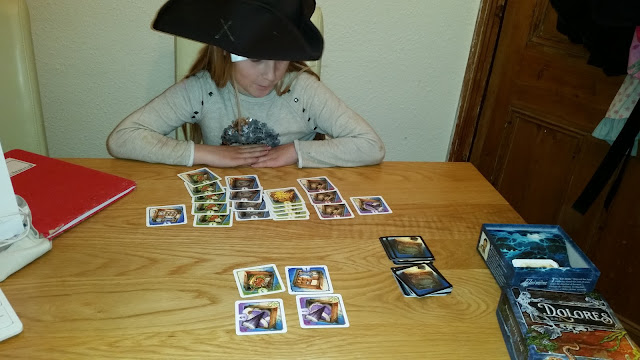 With the four cards in front of you, it becomes important as to what you choose, as its not only the largest stash that is scored, but also the smallest, so having one card with a 3 value is good, unless you can get lots of cards at either 1, or 2, or 3, all being you smallest then they are ALL counted for your total, so tis about balancing what you want, what you need, and trying to avoid what will not help you when you score.  The game ends when the Dawn card is revealed and the wreckers slink off to safety from the customs men.  This card is inserted near the bottom of the deck randomly.

The game plays fast, and is surprisingly fun for such a simple concept, as there are choices to be made every turn, bluffing your opponent, or even coming up with deals before hand (which of course like all good scoundrels you do not have to stick to).  Its small, portable, and a very good party game, or pub game too due to not needing much space and the play time.  Its great for gamers, and non gamers too by being very simple in concept but deep in tactics, as you will find by your second or third game you start looking thinking, yes I want that card, but not this one, so I should do pick first, but.. what if my opponent does that too>? or does war?..... plenty to think on.  The fact the game looks lovely too does not hurt it!  Pirate and/or west country accents are strongly recommended though not compulsory.

This game is easy to learn, and easy to play, I like collecting the sets of things, and playing tricks too by promising Dad some cards, then choosing fight to take them all for me!!  I think its a good game to play and fun for all people.


With an RRP of £13.99 its good value for the amount of fun and mayhem, so you can set course to your local game store and pick up a copy for yourself.

Or head online to Amazon or your favourite game retailer.

If you also like to delve into the age of sail, take a look at Merchants and Maruaders Broadsides for some close combat action on the high seas, or perhaps Skull for another fast playing multiplayer cut throat card game.