I have said it before, I love the Lord of the Rings, and the works of Tolkien, so any time I can play a game based on to and dive into that world its something I want to try.  Fantasy Flight Games Journey to Mordor provides a pocket sized (well a big pocket anyway) trip into the lands of middle earth.  Up until now it has only been The Lord of the Rings the card game LCG also by Fantasy Flight Games. 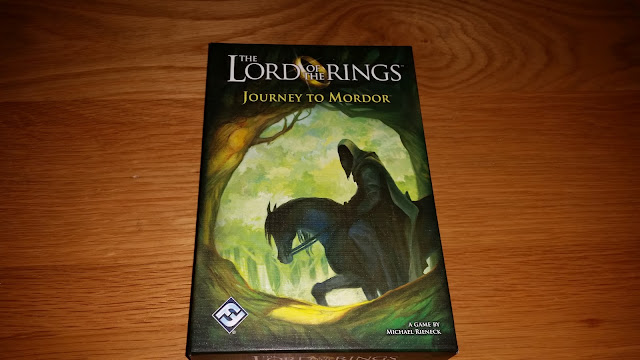 The art on the cover is like most things from Fantasy Flight Games, absolutely beautiful, and with the small box size can sit nicely on the shelf with your copy of the book.

Sauron threatens to push Middle-earth into eternal darkness in his desire for the One Ring. All hope lies on Frodo Baggins and his friends from the Shire. Your task: Bring the One Ring to Mordor, then destroy it in Mount Doom.
With each roll of the dice, players make decisions and try to move their hobbits as quickly as possible to get to Mount Doom. They're supported by Gandalf and others, but also potentially blocked by orcs and persecuted by Ringwraiths. Players must be bold enough to choose the right dice symbols and shake off the Nazgul. 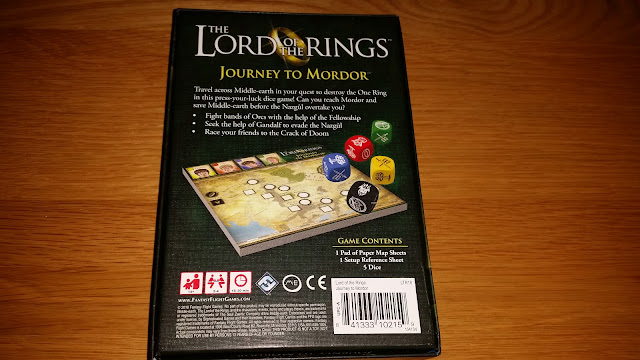 Its for 2-4 players, age 14 and up, and think that may be a bit high, I first read LOTR a lot younger so its something you will need to judge for yourself.  It recommends about 15-30 mins to play, which seems right from games we have played so far.
So lets take a look inside, and see what we get and how it plays........ 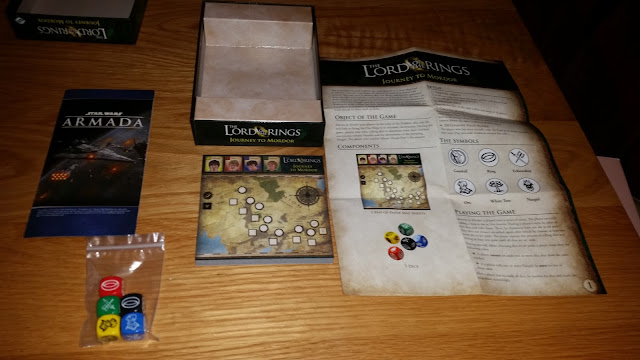 So inside the box you the normal FFG catalogue, a bag of lovely looking dice, a surprisingly large rule shett for such a small game and a pad of maps.... this is my only downside... maps you must mark with a pencil... I'm not a fan of doing things like that, but then gentle use and an eraser can save them, or laminate a few and use markers. 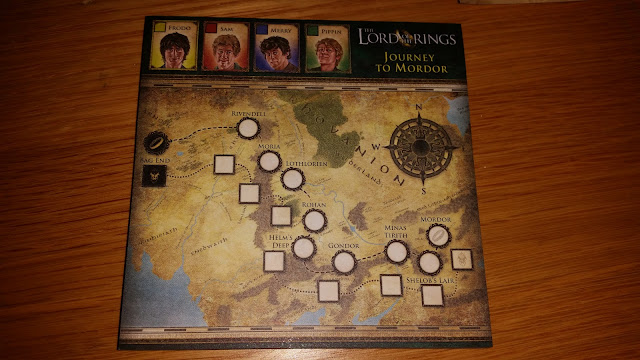 So to start playing you pull a map sheet for each player (it can actually be played solo) then each player picks a hobbit and marks the corresponding character as their player character.

Each turn a player takes all 5 dice and rolls them, then chooses at least one to set aside.  Any dice not chosen are rolled again, then once more at least one is set aside.  This continues until all dice are set aside.

There are some rules you must follow though whilst rolling, you cannot set aside two or more dice of the same symbol each time, and if you roll a Nazgul symbol it must be set aside.

After all the rolling is done you then mark your sheet accordingly. 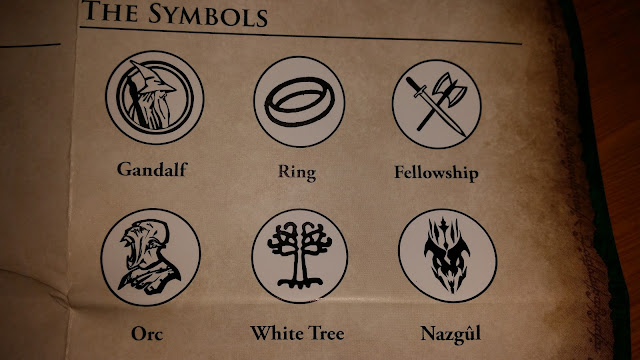 The dice are stunning and have different symbols on them that represent different things.

For each Gandalf symbol set aside you draw a line on one space on your Nazgul track  that divides it into two, slowing the Nazgul.

The Ring symbol lets you mark the next space ont he hobbit track, but you must resolve any orcs first.

Orcs are there to hinder you, and one uncancelled orc cancels ALL your ring progress rolls.

The Fellowship roll cancels an orc roll, so for each orc you will need a fellowship to remove them.

Then there is the Nazgul.  The colour of the dice with the symbol on shows which player is affected, the black die affects the active player.  For each Nazgul set aside the player that has a matching colour must mark a progress on the Nazgul track.

Lastly the White tree.  This is only found ont he black dice, and if you set aside the white tree you can not set any more dice aside for the rest of the turn.  Its good though as it lets you resolve all the dice you have already, so if you have good ones already it may be worth cashing in..... 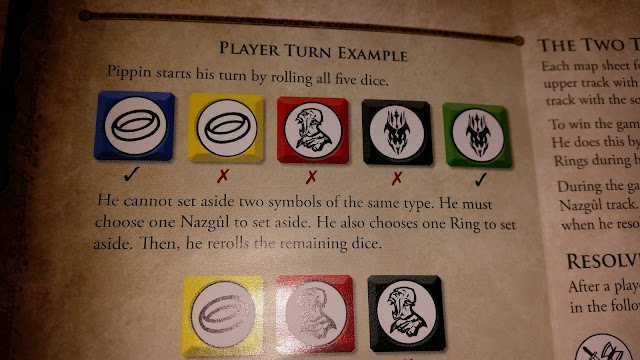 The rule sheet gives you a nic example of play. 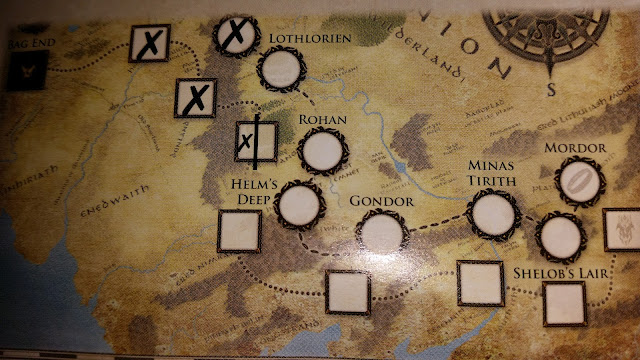 You can see then as the tracks get marked, getting Gandalf to help out becomes really really handy.

It seems really simple in theory, but there is a lot of thought to deciding which dice you will keep, and which you re roll... also you can really mess up the other players with Nazgul too, which can be amusing.

There are some advanced rules as well where certain locations have extra rules some good, others not so much, for example.....

in Minas Tirith you meet the Witch king which means for that turn all Nazgul rolls effect you rather than the other plauyers, or Lothlorien  where each fellowship roll can cancel two orcs.

playing it with the normal rules is fun, but to get the most out the game I recommend using the advanced rules where locations matter, and they are all themed to the book as well.

At first glance you may just think.. meh its a roll dice game, but its much more than that, you need to think hard about what you keep and what you roll, thinking about later on in your turn, what if you get too many orcs? you cant move, so best stack up a fellowship or two, but what about nazguls... you can use them to hinder your opponents, but of course that's a die that is not having any effect on advancing your own quest.

The rules manual is pretty long for such a small game, so may seem a touch daunting, especially to new players, but trust me, its not... one read through and you will be away messing with you buddies trying to reach mordor first.  Or playing it yourself solo and seeing if you can beat the Nazgul to Mordor.

For the price, this is  surprisingly good little game, and even better if you are a Tolkien fan.

I really need to read the Lord of the Rings and let Olivia watch it with me for her to get the most out of this game.

You can pick up a copy with an RRP of £12.99 from your local game store and join in the fun, its the perfect gift for the LOTR fan in your life, or you if you a Tolkien fan.