Time for another Xwing ship build, this time focusing on the Empires TIE Special forces ship, a rather hefty hitting TIE fighter variant with both front and rear firing arcs.  As Always only using the cards that come in the pack, and looking at roles on the battlefield for her. 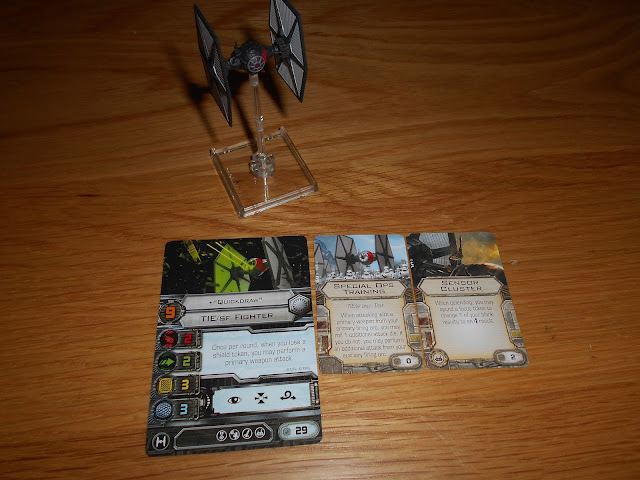 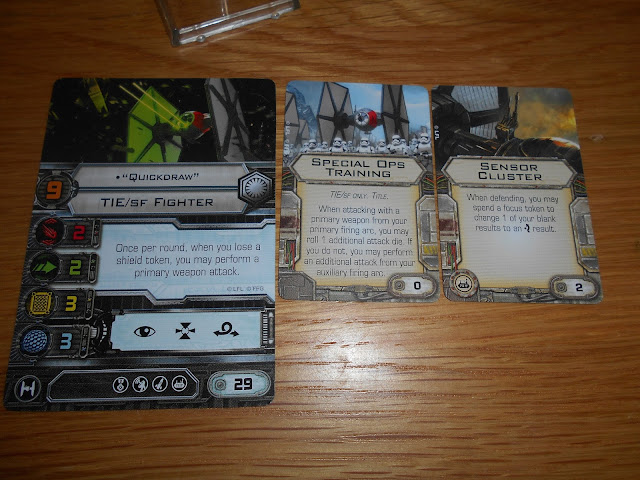 'firstly i went with the skill 9 Quickdraw.  With skill 9 you will usually be moving last and shooting first, allowing you to pick the best action to adjust to the situation.  And of course the ability if someone hits and damages you and you lose a shield token, you can then attack, though it does not have to be at the same target.  for upgrades Special Ops traingin provides you a bot more firepower in the front arc, or lets you fire from the rear as well, so that ties in nicely (TIES.. see what i did there) with Quickdraws ability, letting you fire forward and back, get hit lose and shield, and fire forward and back again.  Sensor Cluster is there to keep you alive hopefully a bit longer by letting you spend a a focus to convert a blank into an evade.

The ship is pretty solid for a TIE fighter, and can either hit hard from the front, or fir twice once form the front, once from the rear.  Shes great to mix in with regular TIEs to draw fire from them, and provide a nice covering arc whilst moving forward and using its manouverability to line up the best double shots, or concentrate fire at close range, and of course making your opponent think twice about shooting it, as it can attack back, so if they attack and damage you fire back, if not its still win win as you are not being attacked!

An excellent and rare choice for the Empire with a solid ship and high PS.

Take a look at the full pack and have a go at building your own one!