Flick 'em up! from Z-Man Games unboxing and review

Board games are not always about deep strategy and worker placement, and card combos, sometimes, a good theme and something simple and fun can make a game a great one to play.
I have never really played dexterity games before, but i do like westerns, so seeing Flick 'em up! I was certainly intrigued. 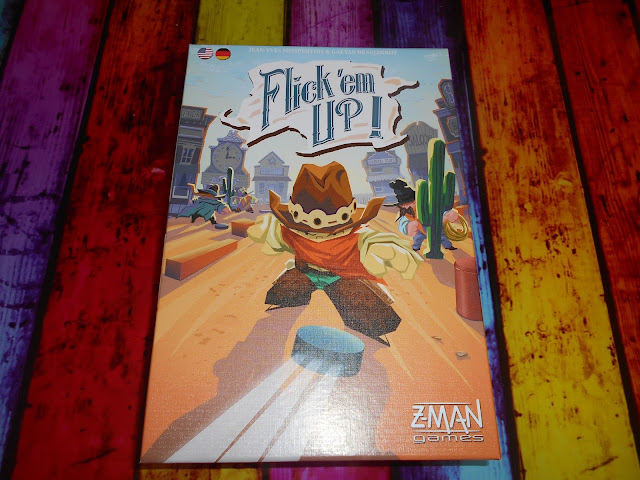 The cities in the West are not the safest place to be. In the disc-flicking game Flick 'em Up!, you can become an outlaw and rob banks, free prisoners, attack innocent bystanders... or you could become the Sheriff and try to protect the people of your city from these bandits!
Relive the great adventures of the West, face your enemies in street duels, use different guns and tactics to get what you want. You can follow the scenarios or create your own—the choice is yours, cowboy!

The box is nice with some stylized western themed artwork on the front and back, and pictures of the game in action as well. 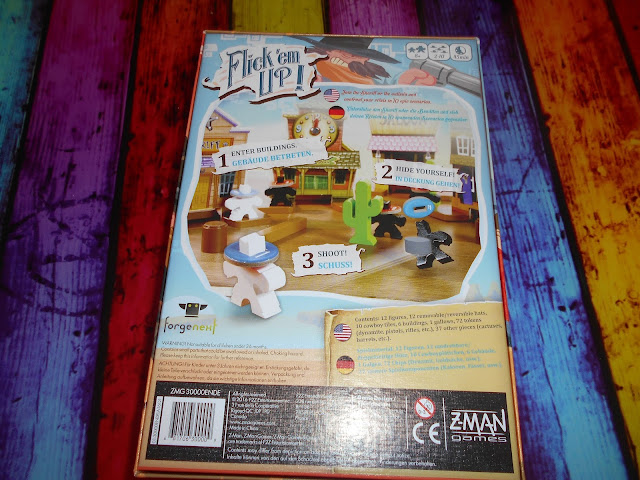 The games recommends ages 8 up, which is really subjective as  i think in concept its a simple enough game for younger players, and Olivia aged 7 had it mastered and was surprisingly effective!  2-10 players..... yes... its possible to play 10 players, as you have one player controlling each character, but then it would take so long i think it wouldn't really be viable.  We played it 2 player and it was a blast, but i would not want to play any more then 4 players due to the time it would take.

Lets crack it open and take a look at the goodies within! 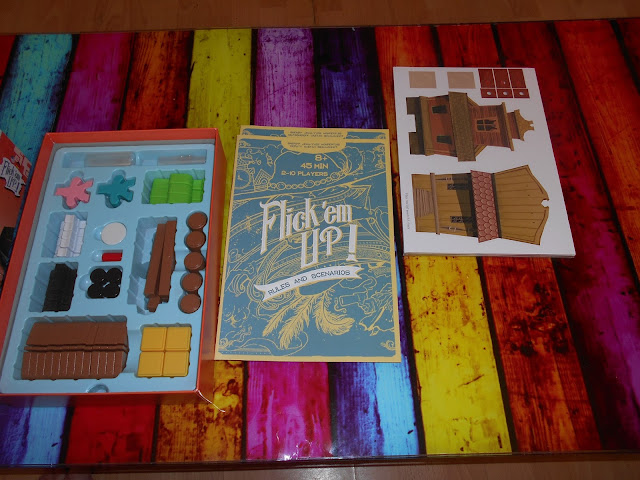 once you pop the lid you get two very copies of the rulebook, one in English, one in German.  Then a few slabs of pop out tokens which we shall a closer look at in a bit. 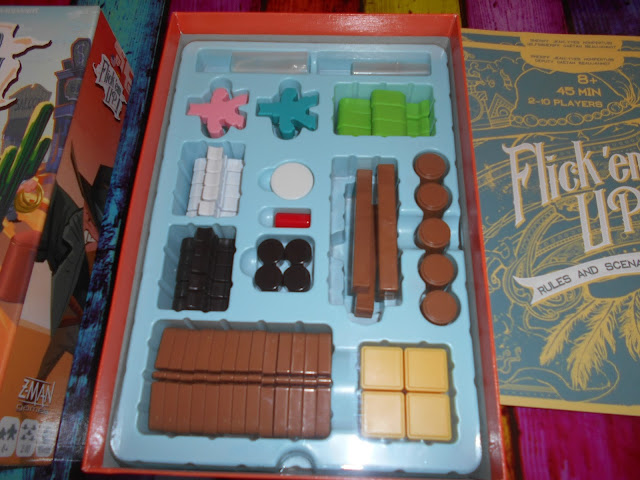 Now the plastic components, you can see hay bales, barrels, fences, cactus, and of course the people, along with 4 "bullet" discs, a movement disc, and a dynamite token.. yes dynamite!
Lets have a closer look at some of them.  They are nice quality plastic and you can clearly see what they represent.  Its nice as well that the box has slots for all of them to go back into.  The Blue and Pink figures represent bystanders, or hostages, or people you may need to escort in a mission. 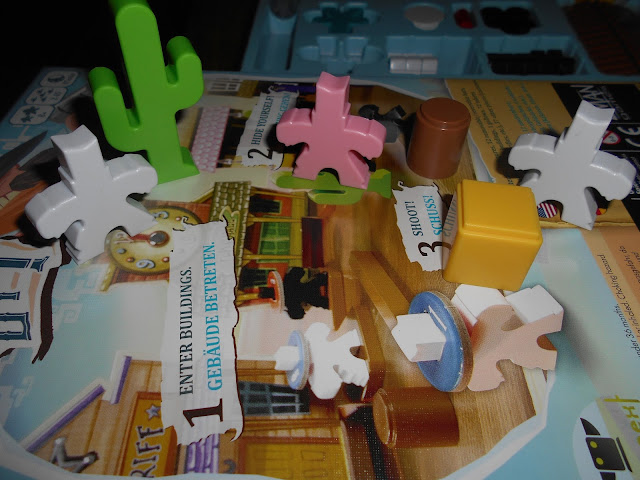 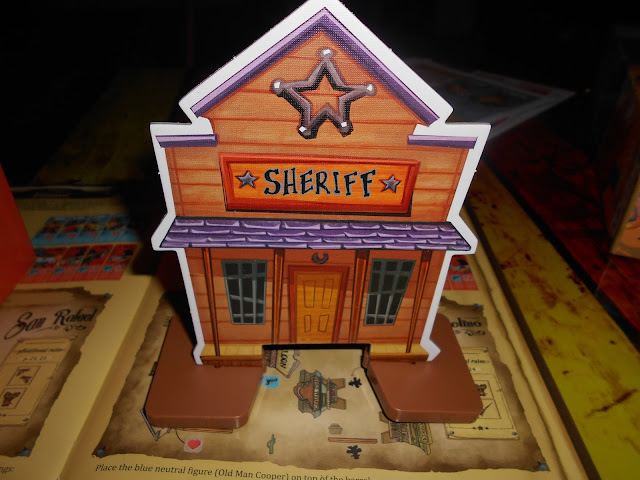 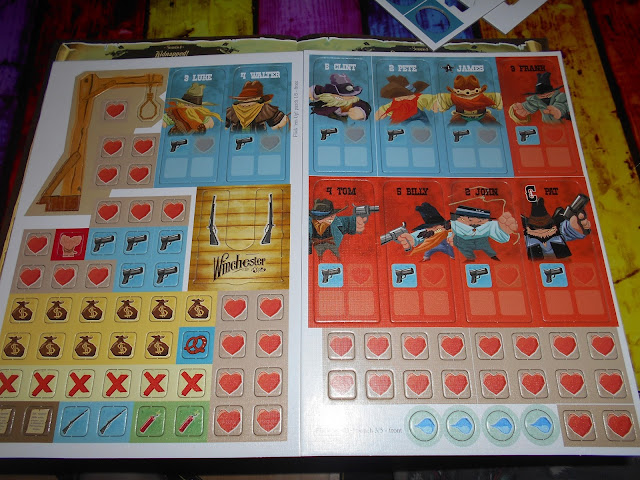 The tokens and punch out buildings are all nice quality cardboard and have all sorts of bits on them, from the Winchester which gives you a nice aiming advantage when flicking, to an extra pistol, assorted loot, and of course the cowboy characters and life tokens, and the hats.... The hats are double sided and numbered, so they will go with the numbers on the charater board.  when you have performed your action you flip over the hat to its other side Red/blue and then you know they have activated.  Each Cowboy gets 3 live tokens, and each time he is hit and knocked down he loses one.  when they are all gone he is dead and out of the game. The rulebook is lovely and full colour and has 10 scenarios that all follow a story.  Its really well done, as each scenario adds something new into, perhaps the Winchester rifle, twin pistols, carrying items, dynamite and so on, so you never feel overwhelmed by rules, and by the time you get there you have learned all the basics.  Each scenario has a different town layout, and theme to complete.  Of course though nothing stops you changing it, or making up your own up completely. 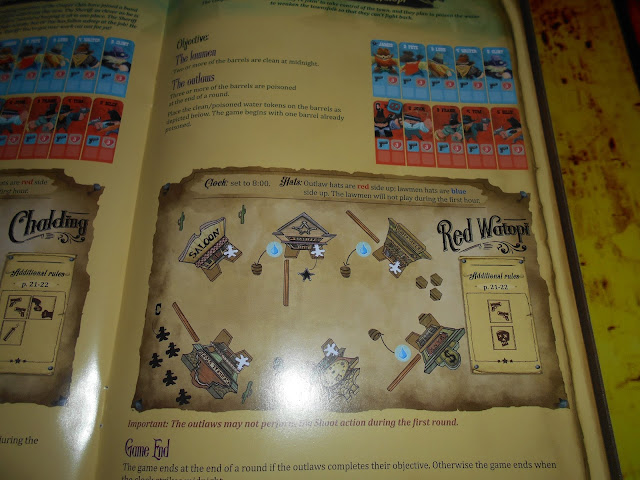 The main clocktower building has a clock on it that you adjust each turn so you know which turn it is, and helps you keep track of the colour you should see on all off your cowboys hat for that turn.

For your turn you get two actions, and you can do any combination, you can move.... where you lift your cowboy and place the white disc down, then flick it.  So long as it does not hit anything else (in which case it is reset) you then place your cowboy where the disc ends up.  You can shoot..... you place a bullet token next to the side of your cowboy and flick it trying to knockdown an opponent.  Or you can pick an item up if the scenario requires it.  Then your opponent activates a cowboy, then you and so on. You can enter buildings by flicking the movement disc through the slot in the bottom, and you can also shoot out of buildings, but you are limited again by the slot at the bottom of buildings.  You can enter a building your opponent is in and go into a duel mode, where you face each other and take turns shooting and moving a discs worth forward each time until someone gets knocked down.  Very thematic. 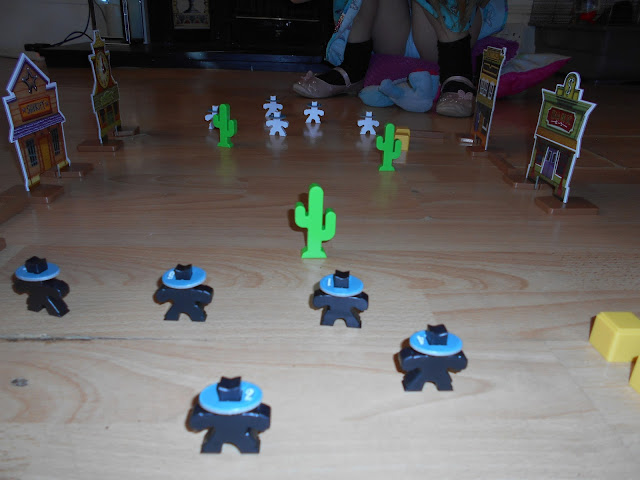 Olivia has her "lawmen" set up, whilst my outlaws roll into town to cause some havoc.  It really looks fantastic set up, the components are lovely.  And with some imagination you are there! i think for looks wise its striking and right up there with Colt Express 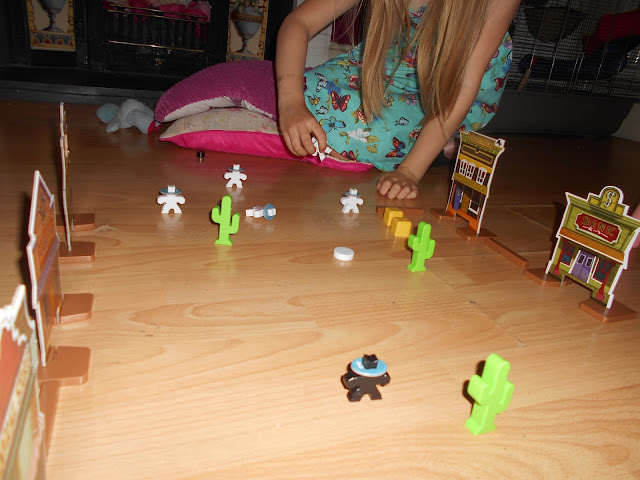 shots are flying, and lawmen are falling 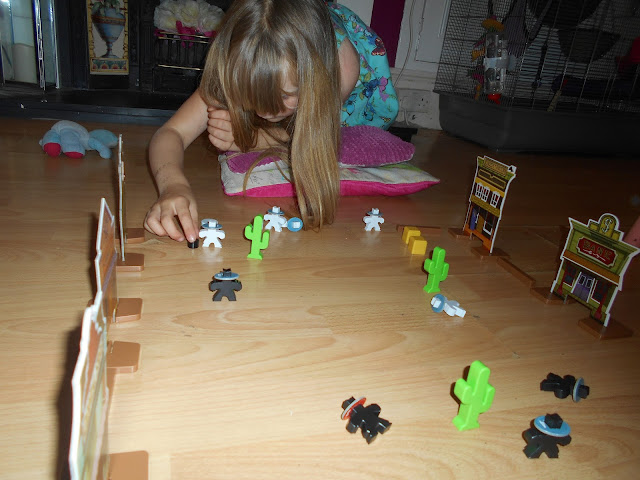 Once Olivia got her eye in though...... the Outlaws where dropping fast.

The components are lovely and nice quality, certainly for a game of this price.  The variety of missions are fun, there is always something different you can try, plus of course making some for yourself.  The rules are super simple, so a quick explanation and you are away, in fact you can teach AS you play so long as someone can flick they can play the game.  It is a dexterity game, but there are still tactics, where to move your guys, in what order to move them, should i go for loot, or shoot and so on.  All in all, some of the most game time i have had in a LONG time, its simple, but fun, charming to look at i, and you will get plenty of fun out of it played with friends and family.

I REALLY liked it, it was fun to shoot the outlaws down and sometimes crazy things happened like cactus getting spun around by bullets.  Its easy to play, i just have to be careful not to lose the bullets under the sofa when i flicked it too hard!  I like being the sheriff and stopping the baddies.I just need to practice my shooting and i can win more!


With an RRP of £32.99 this is great value for the high quality components, and amount of fun you will have with this game.  Go find your local game store and pick up a copy, or ask them to order you one in if they do not have one!
Labels: Z-man games