The USS Valiant (NCC-74210) was a 24th century Federation Defiant-class starship operated by Starfleet. The Valiant was launched from the Antares Ship Yards in 2372. It was assigned as a training ship for the elite cadet corps Red Squad under the command of Captain Ramirez.

In late-2373, the Valiant began a three month training cruise mission to circumnavigate the entire Federation before returning home. The plan was for the cadets to run the ship while the officers aboard observed and critiqued their performance.

The ship was transiting the Kepla sector when the Dominion War began, and subsequently trapped behind enemy lines after a Dominion fleet conquered that sector on the first day. In attempting to return to Federation territory, the Valiant encountered a Cardassian battle cruiser near El-Gatark. In the first fifteen minutes, all seven of the regular officers were killed or critically wounded, including the captain. The Valiant lost main power and was adrift; fortunately the Cardassian cruiser was no better off. The cadets got weapons and impulse engines back on-line within three hours, and were able to destroy that cruiser. The next day, just before Ramirez died, he appointed Cadet Tim Watters to the command.

Early in the war, Starfleet ordered the Valiant to track and collect technical data on a previously unidentified Jem'Hadar battleship that was believed to be operating in the area. However, because the Valiant was operating under complete radio silence and limited to a speed of warp 3.2, Starfleet was unaware that the ship's officers were dead, and Watters decided to undertake the mission.
Around Stardate 51825, the Valiant rescued Jake Sisko and Ensign Nog from the runabout Shenandoah, which was fleeing from a Jem'Hadar attack on Starbase 257. Nog assisted the Valiant's crew in repairing their warp drive, and the ship finally managed to catch up to the Dominion battleship and obtain detailed intelligence concerning the enemy's capabilities.

Captain Watters' overconfidence, however, proved to be the Valiant's undoing. Rather than returning the valuable information to Starfleet, Watters decided to attempt to destroy the battleship by exploiting a perceived flaw in her construction. Vastly outgunned, the Valiant was quickly devastated after an unsuccessful attempt to destroy the enemy's antimatter storage system primary support braces. With Captain Watters and most of the bridge crew killed, Nog gave the order to abandon ship. Two of the four escape pods launched were destroyed by the Jem'Hadar ship, while a third was destroyed when it was unable to clear the exploding Valiant. The remaining pod was able to flee the battle area and was eventually recovered by the Valiant's sister ship, the USS Defiant.
Out of a crew of 35 (plus Nog and Jake), only three survived the battle.

I do love the Defiant class ships, so another one in the range is always welcomed.  So lets take a look. 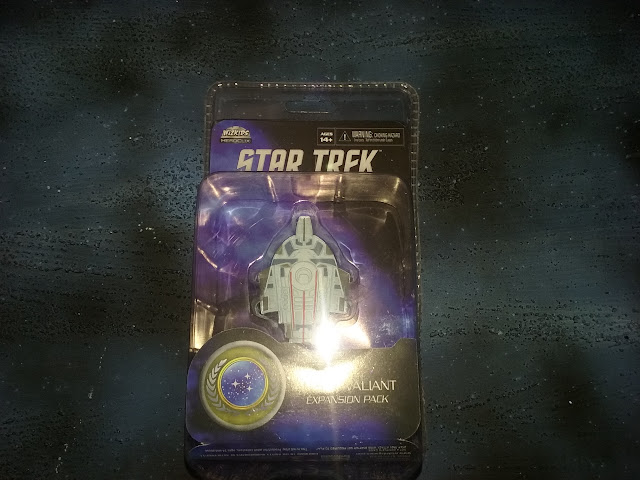 It comes nicely packed as always clearly displaying the Federation faction logo.  It also includes of course all the card tokens, pegs and a base that you will need to use your new ship. 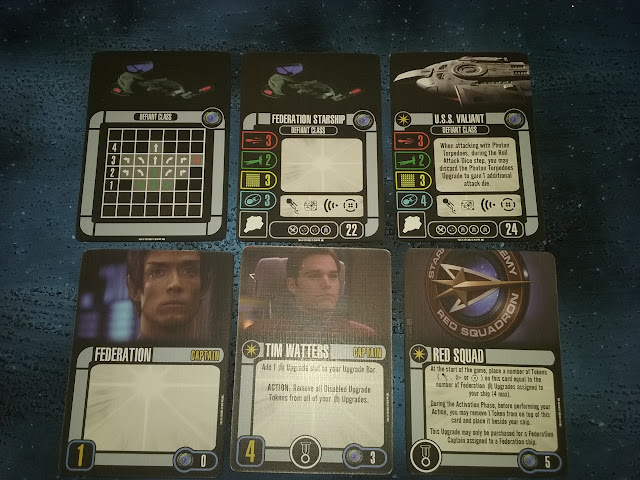 The Defiant class is one of the few Federation ships with a come about, and a good movement selection, so she works well guarding the flanks of your more lumbering ships, or diving into the action.  You get a generic un named ship, and a generic captain as well.  The named ship Valiant has average stats across the board, nicely balanced.  Her named ability works when you are attacking with torpedoes, and lets you discard the weapon to gain an extra attack dice.  Could be useful in the right circumstance.

Tim Watters is our named captain, with skill 4 for 3 points, he provides a nice lower skill option for Federation ships.  He adds a crew slot to your upgrade bar, and his action is, you can remove all disabled tokens from all your crew.

The elite talent in the pack is a great one. Red Squad lets you place a number of evade, scan or battle station tokens on the card equal to the number of crew deployed to your ship.  Then during the activation phase you can remove a token from the card and place it by your ship, and do your normal action as normal.  It s great as it lets you combine things, by target locking, and using the battle stations token from the card to get maximum damage potential. 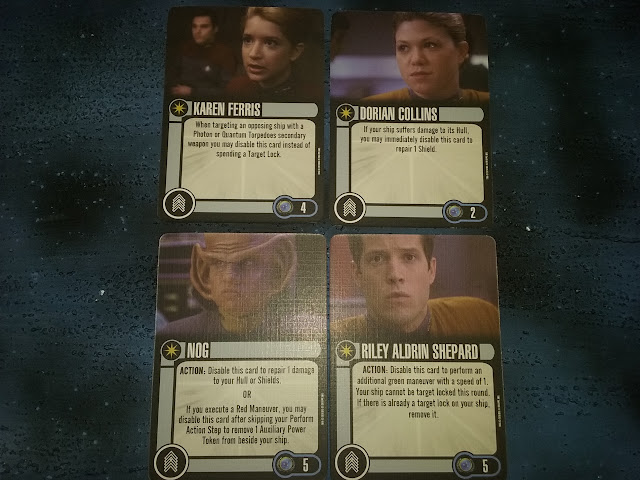 Karen Ferris is a crew upgrade, that can be disabled whilst targeting a ship with torpedoes to avoid spending our target lock.
Dorian Collins can react when your ship takes damage to its hull.  By disabling her you can repair a shield.
Nog provides you with options, you can either as an action, disable him to repair 1 damage to your hull or shields, or if you execute a red manoeuvre you may disable him after skipping the perform action step to remove an auxiliary token.
Riley Aldrin Shepard is an action and disable to perform an extra green manoeuvre of speed 1, you can not be target locked this turn, and if you already have a target lock you may remove it. 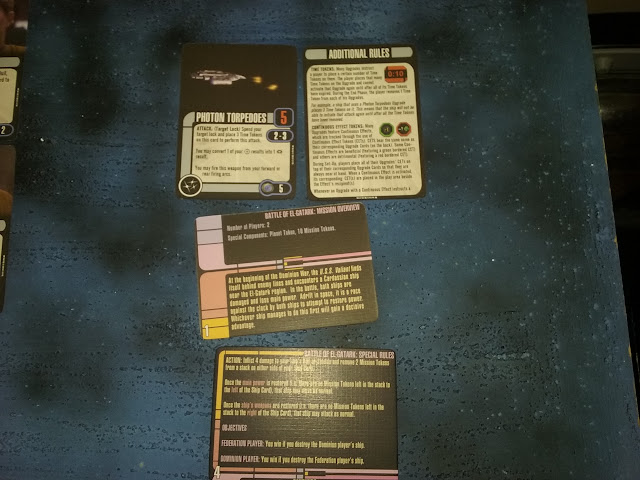 Lastly you get a set of Photon Torpedoes, which are the standard time token type.  The mission in the pack is the Battle of El-Gatark, a two player mission with a nice twist to it.  Each ship is damaged in both the weapons and engine functions, and there are mission tokens to denote both, you can s an action repair one, and when they re all cleared you may move as normal (rather then at speed 1) or fire if you fix the weapons, so there is a lot of thinking, do I want engines fixed first so I can run from my attacker, but not be able to attack back? or do I want weapons up first so I can shoot, but may not be able to manoeuvre myself to safety. 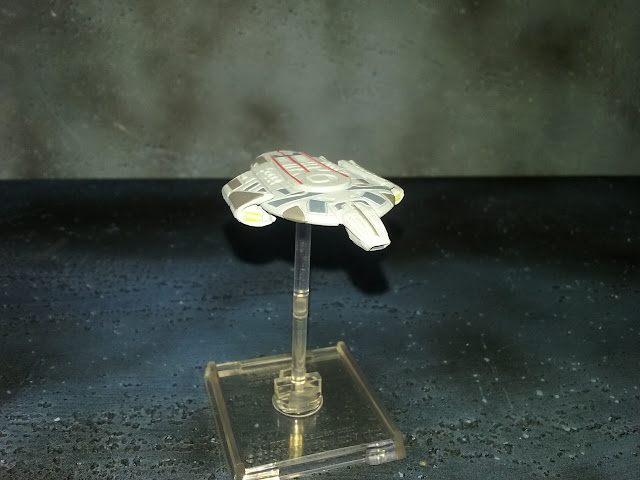 The model is the standard Defiant class, nicely detailed, but could do with a wash at least. 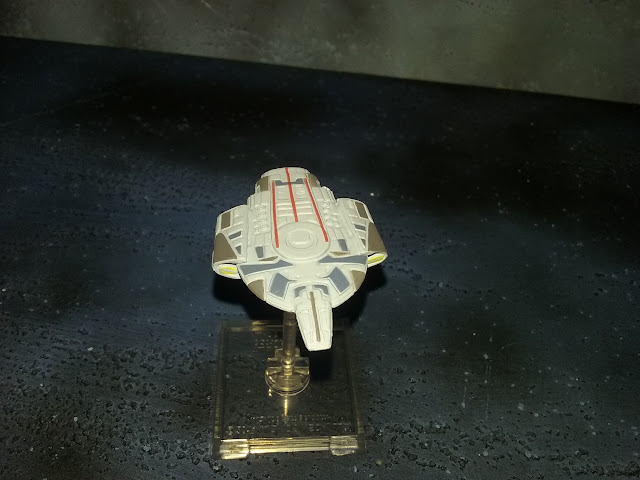 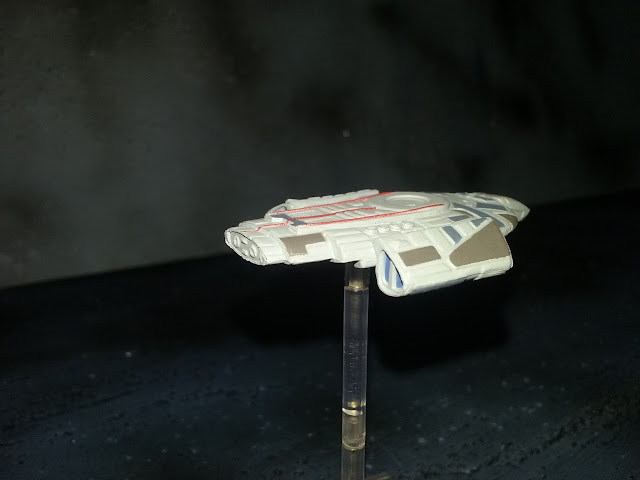 You can pick one up by finding your local game store here with an RRP of £11.99 it adds another Defiant class to the fleet which is always a  good thing, and some great new crew options for your fleet.

Come and join us in all sorts of gaming chat in our Facebook group here, and come follow us on Twitter @rollyoursix join the chat, and tell us about your games!
Labels: Attack Wing Star Trek unboxing