Time for another battle report for you from Battle Cry, with me taking the role as the Confederates, and Olivia commanding the Union forces.  In the last battle Olivia led a glorious Union Victory, will the North's luck continue? or will the South turn the tables?

The Battle of Belmont was fought on November 7, 1861 in Mississippi County, Missouri. It was the first combat test in the American Civil War for Brig. Gen. Ulysses S. Grant, the future Union Army general in chief and eventual U.S. president; Grant's troops in this battle were the "nucleus" of the Union Army of the Tennessee. 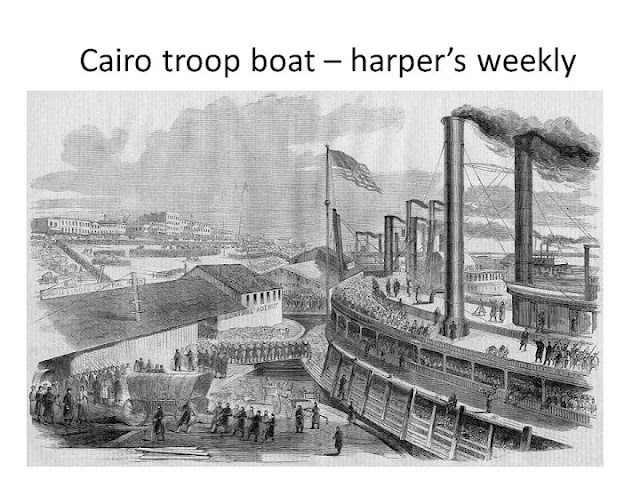 On November 6, Grant moved by riverboat from Cairo, Illinois, to attack the Confederate's small outpost near Belmont, Missouri across the Mississippi River from the Confederate stronghold at Columbus, Kentucky. He landed his men on the Missouri side and marched to Belmont. Grant's troops overran the surprised Confederate camp and destroyed it. However, the scattered Confederate forces quickly reorganized and were reinforced from Columbus. They then counterattacked, supported by heavy artillery fire from across the river. Grant retreated to his riverboats and took his men to Paducah, Kentucky. The battle was relatively unimportant, but with little happening elsewhere at the time, it received considerable attention in the press. 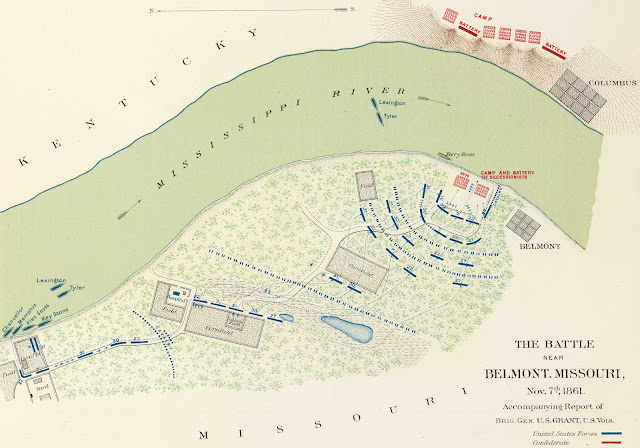 Grant's attack drove in the Confederate skirmish line and for the remainder of the morning, both armies, consisting of green recruits, advanced and fell back repeatedly. By 2 p.m., the fighting became one-sided as Pillow's line began to collapse, withdrawing toward Camp Johnston. The orderly retreat began to panic when four Federal field pieces opened up on the retreating soldiers. A volley from the 31st Illinois killed dozens of Confederates, and the Union soldiers attacked from three sides and surged into the camp. The Confederates abandoned their colours and their artillery, and ran towards the river, attempting to escape. Grant was constantly at the front, leading his men. His horse was shot from under him, but he mounted an aide's horse and continued to lead.

Grant's inexperienced soldiers became, in his own words, "demoralized from their victory." Brig. Gen. McClernand walked to the centre of the camp, which now flew the Stars and Stripes, and asked for three cheers. A bizarre, carnival-like atmosphere prevailed upon the troops, carried away by the joy of their victory, having captured several hundred prisoners and the camp. To regain control of his men, who were plundering and partying, Grant ordered the camp set on fire. In the confusion and blinding smoke, wounded Confederate soldiers in some of the tents were accidentally burned to death, causing returning Confederates to believe the prisoners had been deliberately murdered.

The Federals began to march back to their transports, taking with them two captured guns and 106 prisoners. They were suddenly attacked by Confederate reinforcements brought over on the transports Prince and Charm who threatened to cut off Grant's retreat. These were the men of the 15th Tennessee Infantry, the 11th Louisiana Infantry, and mixed infantry under Pillow and Col. Benjamin F. Cheatham. As the Union men turned to face the Confederate reinforcements, the cannon "Lady Polk" fired into their ranks from Columbus and numerous other Confederate guns opened fire. The Union gunboats exchanged in a battle with the Confederate batteries. Grant said, "Well, we must cut our way out as we cut our way in."

When Grant reached the landing, he learned that one Union regiment was unaccounted for. Grant galloped back to look for it, but found only Confederate soldiers moving in his direction. He spun his horse and raced for the river, but saw that the riverboat captains had already ordered the mooring lines cast off. Grant wrote in his memoirs, "The captain of the boat that had just pushed out recognized me and ordered the engineer not to start the engine: he then had a plank run out for me. My horse seemed to take in the situation. He put his fore feet over the bank without hesitation or urging, and, with his hind feet well under him, slid down the bank and trotted on board."  While the riverboats were returning the missing Illinois regiment was seen marching upriver and the men were taken aboard

The Confederates viewed Belmont as a Southern victory, since Grant had staged a demonstration and been driven off. Union losses were 607 (120 dead, 383 wounded, and 104 captured or missing). Confederate casualties were slightly higher at 641 (105 killed, 419 wounded, 106 captured, and 11 missing). A noteworthy result of the battle was the combat and large unit command experience Grant gained. It also gave President Abraham Lincoln, who was desperate for his armies to attack the Confederates somewhere, a positive impression of Grant 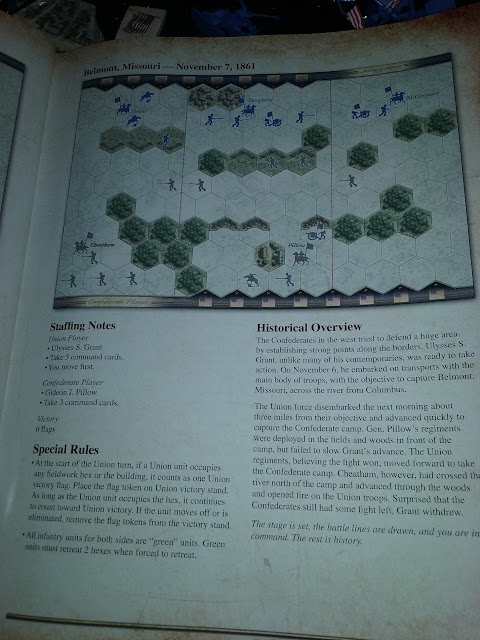 Olivia and the Union will get 5 command cards, whilst my Confederate forces will only get a hand size of 3, so this will provide Olivia more options then me in battle.  Victory is first to 6 flags, and all Infantry are considered Green for the battle. 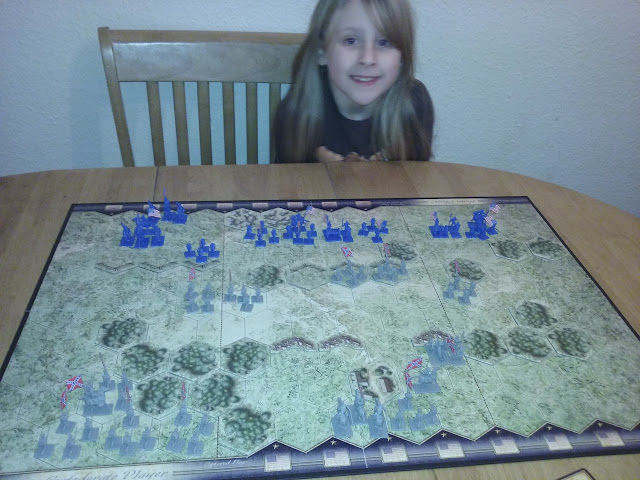 The Table was set and ready for battle! would the Union get another Victory? 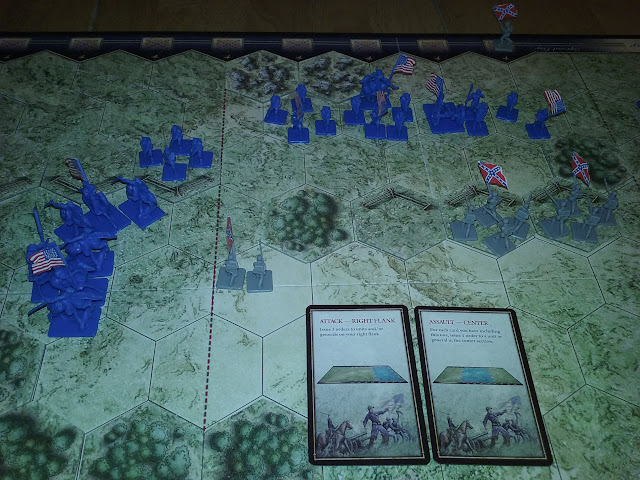 The Game began with the Union attacking on the right flank, swinging all the cavalry in and wiping out a Confederate infantry unit, and then Union musket fire took another 2 stands from an infantry unit.  I responded with an assault in the centre trying to take out some of the attacking Union infantry, though my fire was clearly not accurate enough and only 2 stands fell. 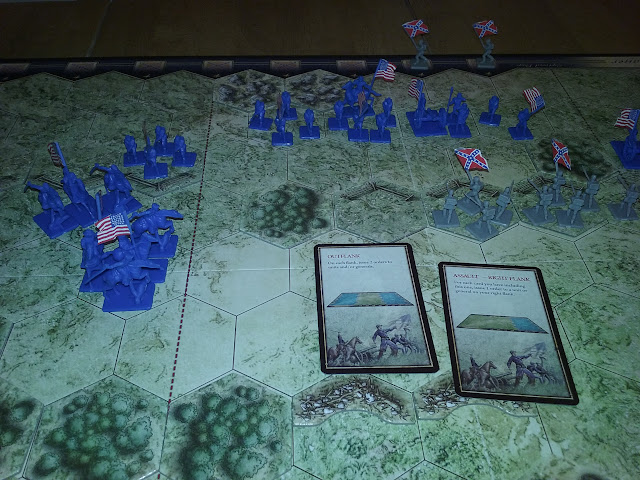 Olivia played outflank, and swept her cavalry in to finish off the battered rebel infantry unit, and then caused casualties to units on my right. things where not looking good already, she had 2 victory flags, and was in a good position to keep pushing on.  I assaulted the right flank to bring troops into position, again my fire was ineffective. 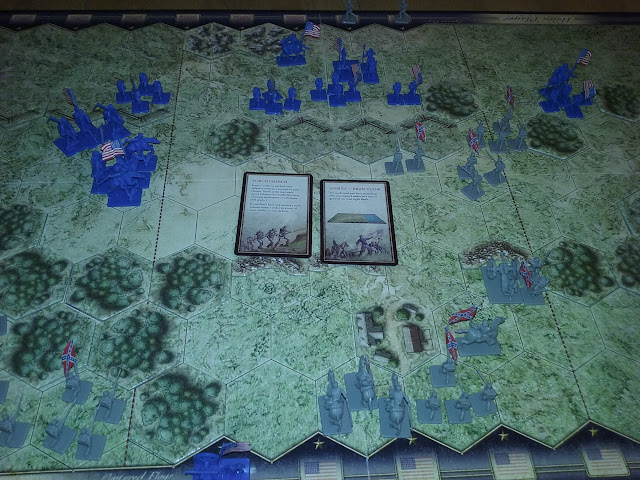 Olivia played forced march in the centre and caused heavy casualties and pushed back my units from their defensive positions in the centre.  I assaulted on the right and managed to take out an artillery battery for my first flag of the game. 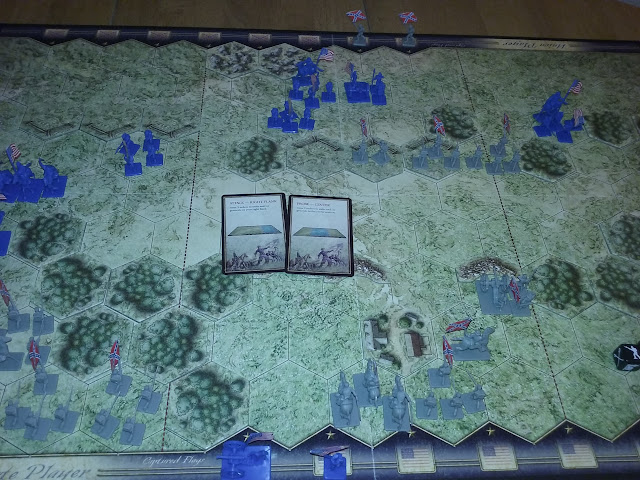 Olivia switched her focus to her right flank, sending her cavalry streaming down to engage the rebel troops and advancing her infantry.  I probed in the centre, retook the defensive positions and wiped out a union infantry unit making it 2 flags all. 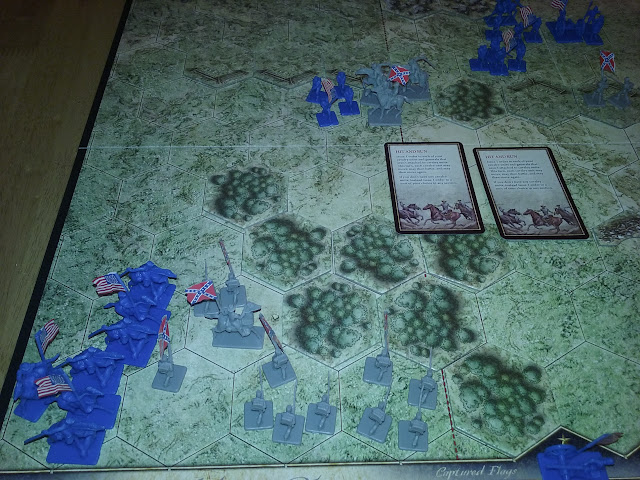 The union cavalry played a hit and run, so they could move, battle, and move again, so they moved and caused heavy losses on my right flank then set themselves up for another attack.  I also played Hit and Run so my cavalry could try and help in the centre, but it would seem they left their sabres at home as they did no damage. 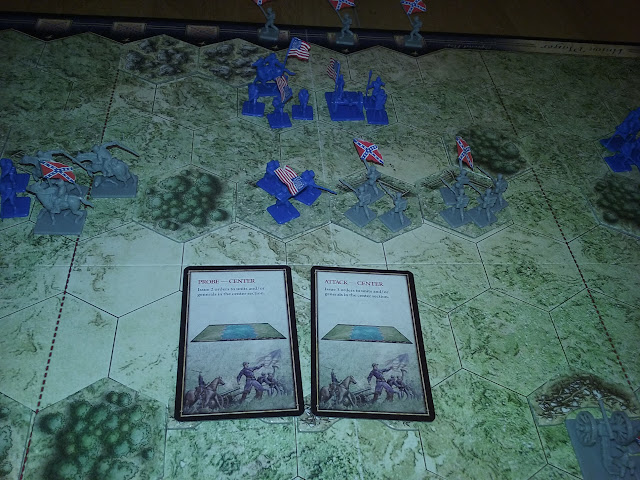 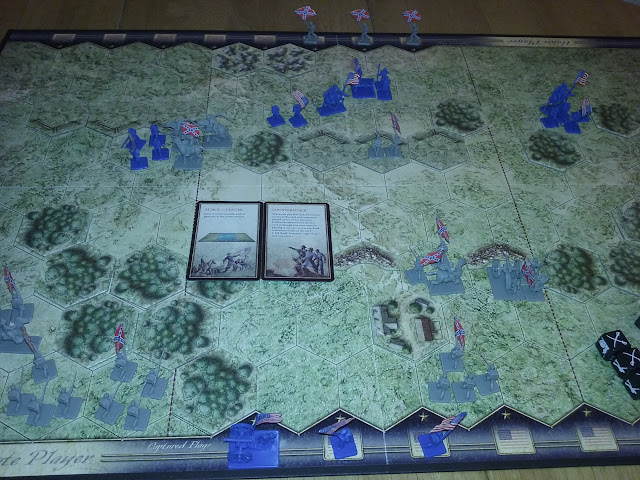 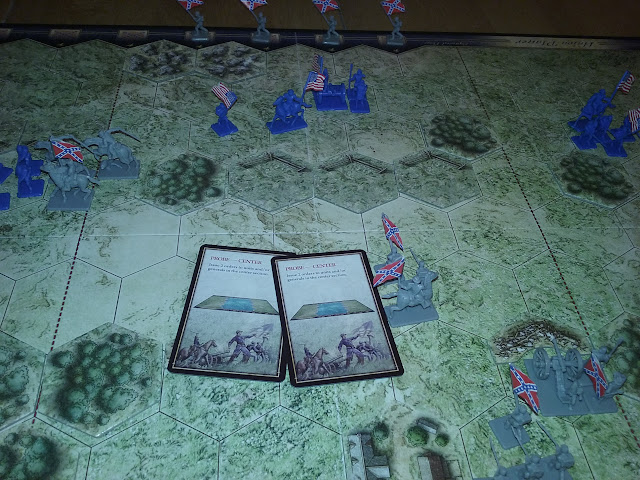 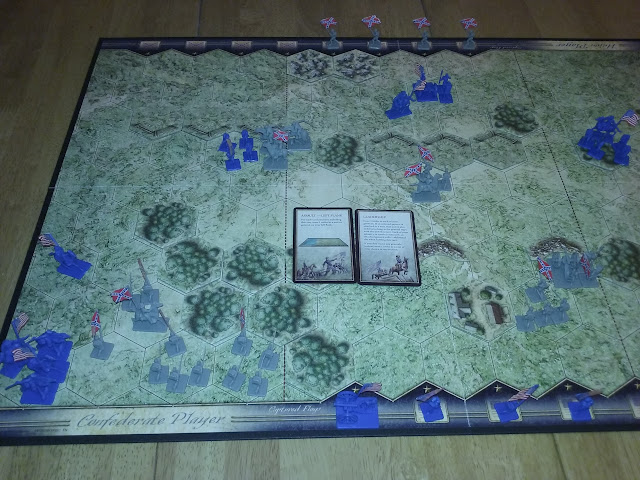 Olivia played an assault on her left flank to try and bring more units into the game.  I played Leadership so I could activate units attached to generals, the fire took out another union infantry unit, and forced a union cavalry unit to retreat. score stood at 4-4, a good fight so far. 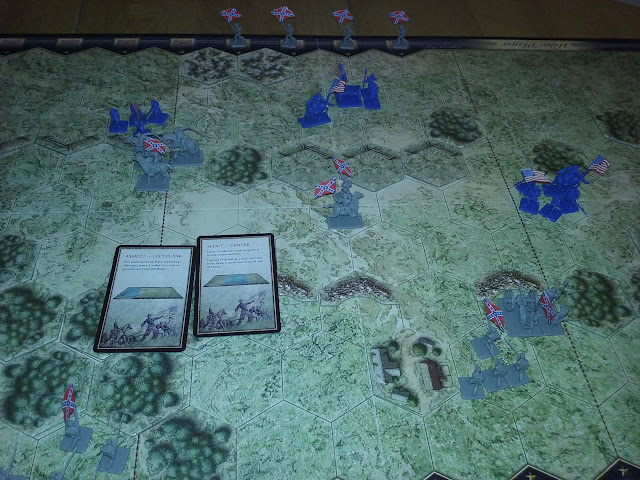 The union forces again assaulted their left flank to bring up units into play, but all out of range of firing.  I played a scout in the centre to move my cavalry over to try and attack the infantry but the dice gods deserted me (they must have heard me whistling the Battle cry of freedom) 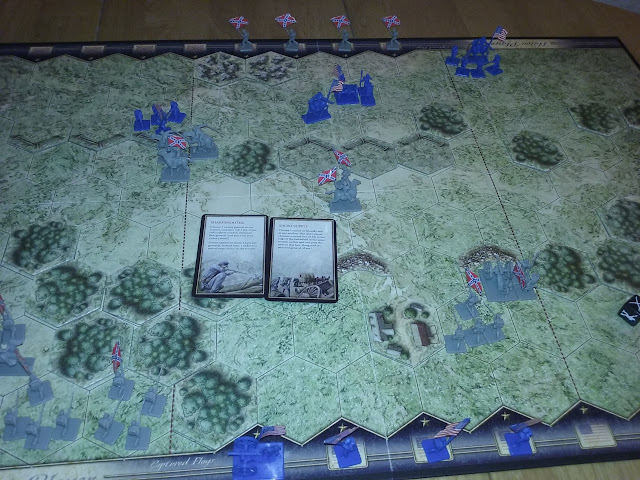 Olivia tried a cheeky sharpshooter to take out a general, but missed.  I used short supply to push back her infantry unit as well to give me some more breathing space. 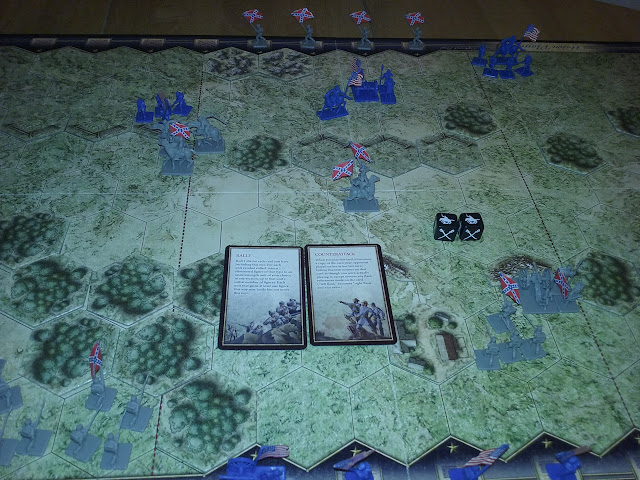 Olivia played a Rally card to try and get back some strength to her units, I played counterattack to try the same though neither us rolled hugely well we did get the odd one back.  This was becoming quite the slugging match. 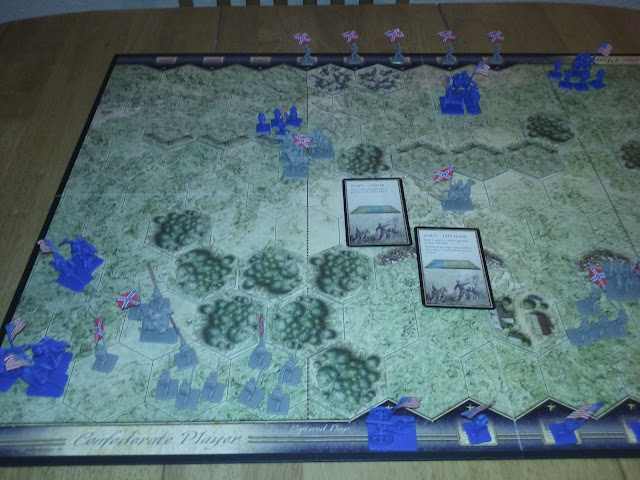 Olivia attacked in the centre, finishing off another rebel unit to give her the lead 5-4.  I scouted on the left flank, but missed every dice roll! 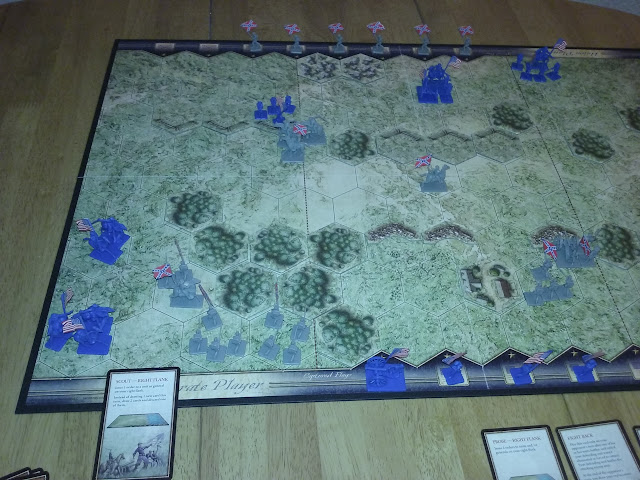 Olivia played a scout on her right flank, and finished off a battered unit giving her the final flag for victory.

That was a hard fought battle, a true slug fest, I felt the difference by having a smaller hand of cards, which of course limited where I could respond.  A well played game that could swung either way but in the end a well earned Union victory, well done Olivia