The Cardassian ATR-4107 was a type of advanced Cardassian weapon of mass destruction. 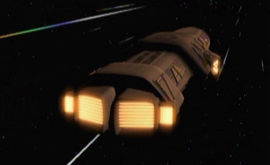 Although officially referred to as a missile, the ATR-4107 could also be considered a completely autonomous warship in its own right. It was a warp-capable vessel carrying 1,000 kilograms of matter and 1,000 kilograms of antimatter – enough to destroy a small moon. The missile also carried a large cache of conventional weaponry, including disruptors, quantum torpedoes, a thoron shock emitter and a plasma wave. On board was a sophisticated computer system that could predict and counter hostile actions, as well as life support and an operational space for a maintenance crew. The defenses are an array of offensive weapons and a powerful shield system.

Its been a while since we had a new ship for the Dominion, so lets see how this one measures up.


As always it comes in a nice clam package, with all the relative card tokens you need and a base of course. 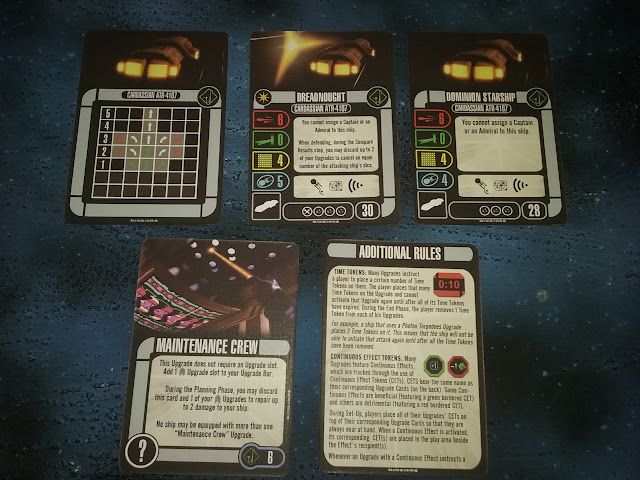 The Dreadnought is fast, up top speed 5, but like most Cardassian ships she's not so great in the turns.  You do not get any captains in this pack, as the ATR-4107 may not have a captain, so she will be firing last all the time, after the generic captain skill 1 ships.  There is a generic ATR-4107 ship as well as the named Dreadnought as well.  She has excellent firepower with attack 6, 0 agility good hull and good shield of 4 each.  Her named ability allows you to discard up to two upgrades to remove that many dice from your opponents attack.

Maintenance crew is a ? upgrade,  which does not require a slot, and adds a crew slot to the bar of your ship, which is the only way you can get crew on the ship, which opens you up to some more choices. 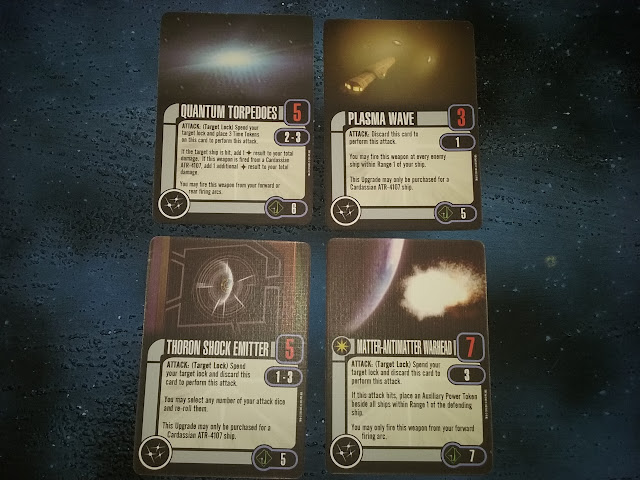 Now onto weapons, that is what this ship is all about, and where she shines.  Quantum Torpedoes hit hard with 5 dice, which is less then your primary weapon, but it does have some tricks.  If your target is hit, add a damage, and if its fired from an ATR-4107 add another damage, making this weapon do at least two damage so long as it hits, and it will recharge with time tokens.

Plasma wave is a 3 strength weapon that can only be used at range 1, it is a discard but is fired against every ship at range 1, so if you fly deep into the enemy formation you can use it, or even if you have enemies on your tail as it will be hard to shake them.

Thoron shock emitter is a 5 attack weapon that must be discarded, but it lets you re-roll any of your attack dice.

Matter-Antimatter warhead is a 7 attack weapon hat can be used at range 3 only.  If it hits, you get to put auxiliary power tokens on all ships at range 1 of the target. 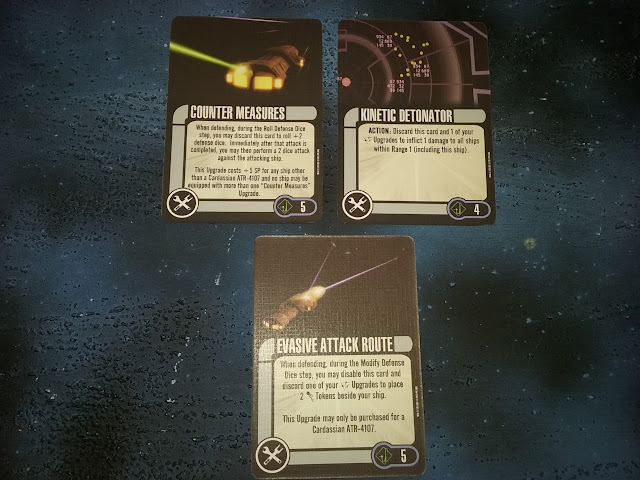 Tech wise we have Counter measures.  You can discard this when defending to gain +2 defence dice, considering the ship has 0 this is a big boost, you then also get to make a 2 dice attack against the ship that attacked you, so a very nice counterattack ability, I like this one, it provides both defence and a nice though small punch back that may sneak a bit of a extra damage on.

Kinetic detonator is an action and discard this card and a weapon upgrade to inflict 1 damage to all ships at range 1, including this one.

Evasive attack route can be used whilst defending.  You can disable this card and discard a weapon to add 2 evade tokens to your ship. 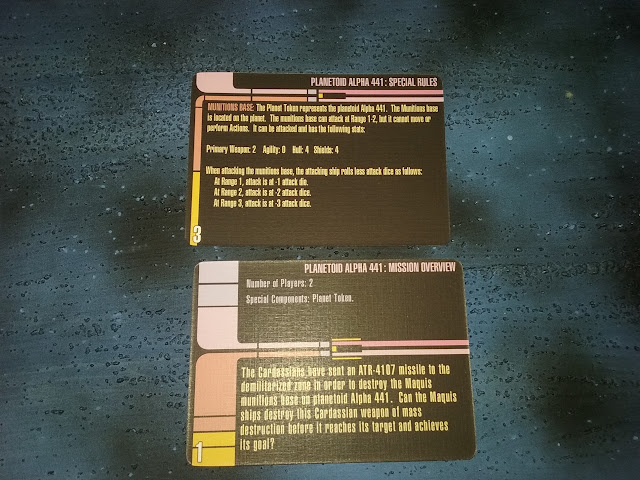 The mission is a 2 player one, Planetoid Alpha 441 where one side is trying to destroy the planet, and another defend it. 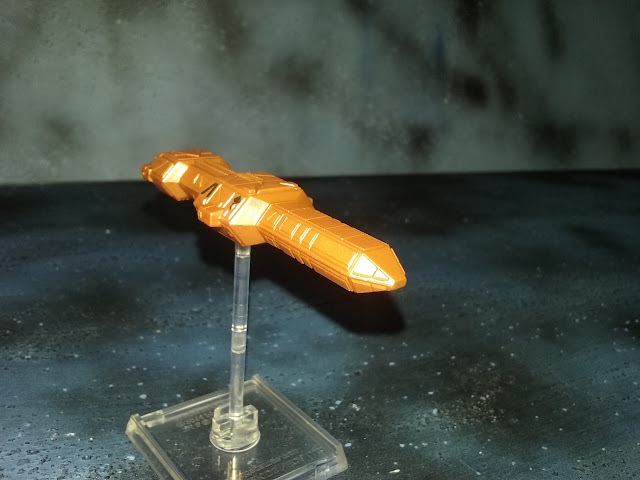 Now onto the model itself, its a metallic bronze kind of colour. 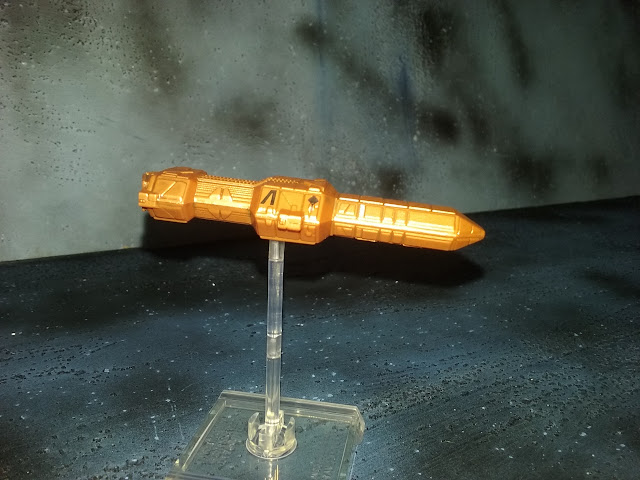 and it has some nice markings on it such as the Cardassian logo. 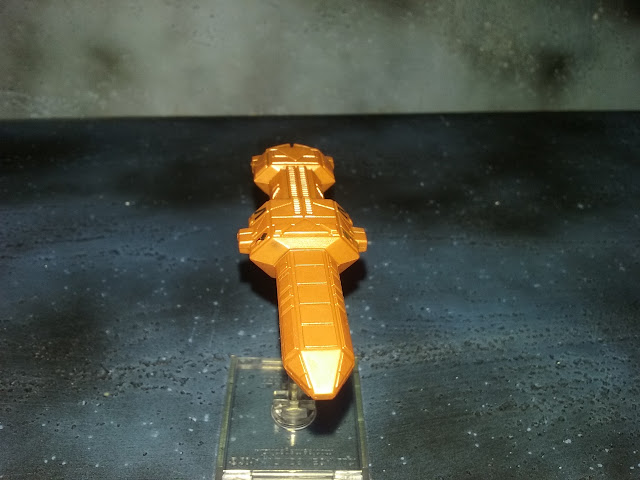 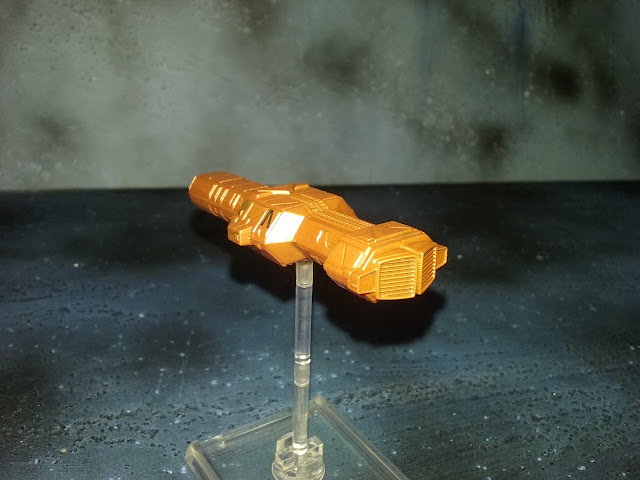 I would have liked to have seen the engines painted just to break up the colour, but overall its a detailed model.

You can pick one up by finding your local game store here with an RRP of £11.99.  It will add some long range heavy firepower support to your fleet, and new cards to play with in your fleet as well as another good mission to try.