Time to take a look at the latest chapter pack from A Game of Thrones the LCG. As you may know from other articles im a huge fan of the series both book and TV and of the game, so its really exciting to see what new characters will be added to the mix. 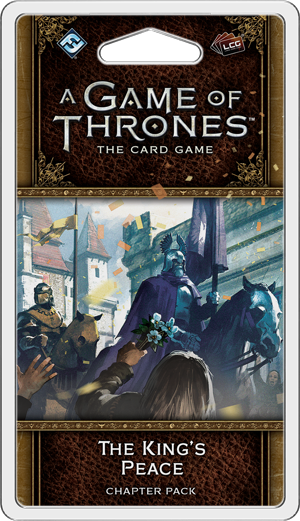 “I must have the gold cloaks. The City Watch is two thousand strong, sworn to defend the castle, the city, and the king's peace.”
–George R.R. Martin, A Game of Thrones

The King’s Peace is the third Chapter Pack in the Westeros cycle for A Game of Thrones: The Card Game, and it continues the cycle’s journey through the first book of A Song of Ice and Fire with memorable characters like Ser Rodrik Cassel, Ser Alliser Thorne, and Ser Gregor Clegane. Two new plots—one neutral and one loyal to House Baratheon—offer new deckbuilding opportunities. Finally, this Chapter Pack includes a brand-new agenda that’s sure to inspire entirely new types of decks. 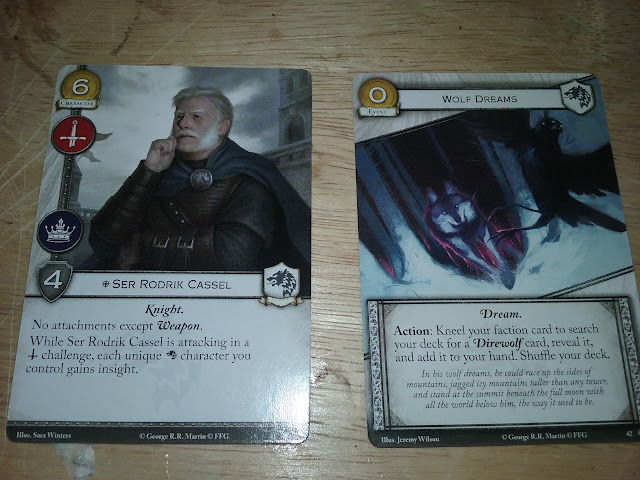 For house Stark we get Ser Rodrik Cassel.  He costs 6 gold, is strength 4 and has military and power icons for his challenges.  He can have no attachments except weapons, and whilst attacking in a military challenge each unique Stark character gets insight, which allows you to draw a card if you win by 5 more.  Very handy if you have several characters involved with the ability.

Wolf Dreams is a 0 cost event for hosue Stark.  As an action you can kneel your action card to search your deck for a card with the Direwolf trait and add it to your hand.  Very good to get more characters out on the table. 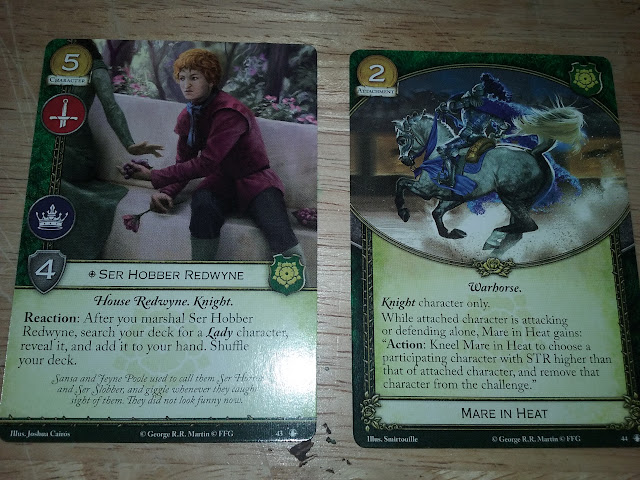 House Tyrell gets 2 cards in the pack.  Ser Hobber Redwyne is cost 5 strength 4, and has the military and power icons.  He has the reaction that after you marshal him you may search your deck for a character with the Lady trait and place it into your hand.  He's a great card for getting you more on the table, especially If you have not seen some of the more scary Lady cards in the Tyrell deck.

Mare in Heat is a 2 cost attachment, that can only be given to a Knight.  Whilst attached and attacking or defending alone he gets the action: Kneel Mare in Heat to choose a participating character with STR higher then the attached character and remove them from the challenge.  This is excellent as it allows you pull out the highest scary characters defending, or if only one powerful character attacking you can block and remove him so you wont lose the challenge. 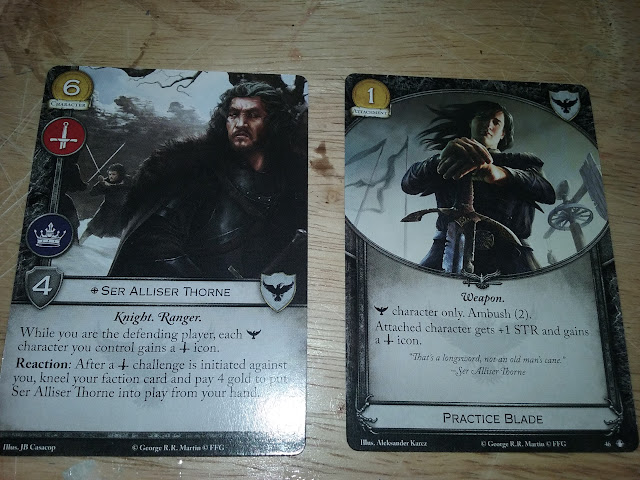 The Nights Watch gets 2 cards in this pack.  Ser Alliser Thorne is a strength 4 cost 6 ranger character with the military and power icons. He has a solid ability that whilst defending all Nights Watch characters you control gain the military icon.  He also has a reaction that after a military challenge is initiated against you, kneel your faction card and pay 4 gold to put Ser Alliser Thorne into play from your hand.  Its basically an ambush that only works against military challenges whilst defending, but its still a handy ability.

Practice blade is a 1 cost attachment.  It can only go on Nights Watch characters, and has an ambush of 2, so can be played when you need it instead of just the marshal phase.  It gives the attached character + 1 strength and a military challenge icon if they do not have one.  This is a great card to have multiples of in your deck, and this pack comes with 3 copies of each card you see. 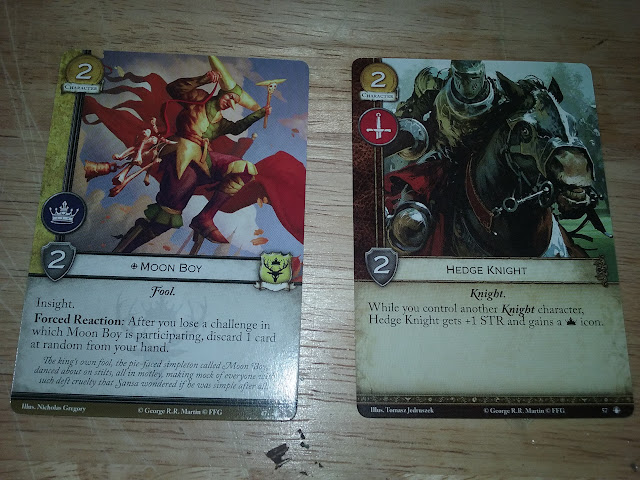 House Baratheon only gets one card in this pack.  Moon Boy.  He is cost 2 and strength 2 with only a power challenge.  He also has insight so lets you draw a card when you win a challenge.  He has the forced reaction thought that if you lose a challenge he is participating in you must discard a card at random from your hand.  He is best used to go in and support others in a challenge, as there is a high risk he could lose and cost you a card.

Hedge Knight is a neutral knight character, cost 2, strength 2 with only the military icon.  But if you control another knight character he gets +1 Strength and the power icon, so he is easily buffed in the right deck. 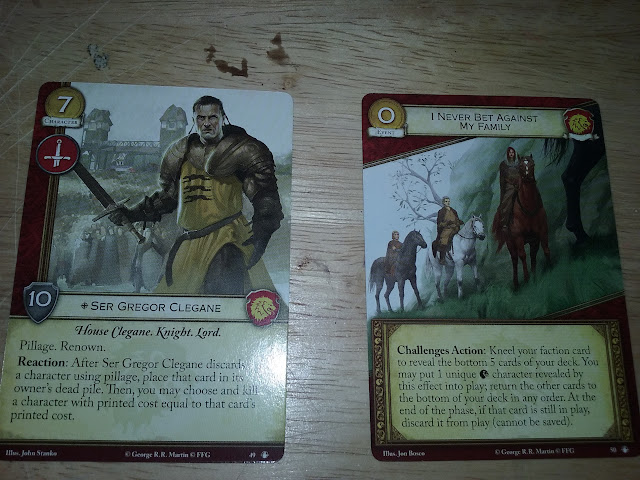 Onto my favourite house. House Lannister gets two cards, and one of them is a BEAST!.  Ser Gregor Clegane, the mountain, brother to the hound.  He costs 7 which is one of the most expensive cards in the game, and he only has the military icon, but he is strength 10. 10... The highest we have seen.  He will take a lot to stop in a challenge, and with his other ability's he is worth every coin.  He has pillage, so if he wins a challenge you remove a card from the enemies deck into their discard pile.  He also has Renown, so if he wins he gains a power token on him that can combine with the others to get to 15 to win the game.  He also has a reaction.... After he discards a character using pillage, you put it in the dead pile instead of the discard pile, meaning they can not use that character again, and then you may also choose and kill a character with printed cost equal to that card! so you not only win the challenge, gain renown, strip a card from their deck, and apply the military claim, but you can also put characters into the dead pile and then kill more of them!  I can onto wait to test him out he will certainly be fearsome.

I never bet against my family is a 0 cost event that provides a challenges action.  You  can kneel your faction card to look at the bottom 5 cards of your deck.  You can put 1 unique lannister character you find into play for no cost.  The downside though is it is removed at the end of the phase, but if you need a character for a big hit, its worth a look. 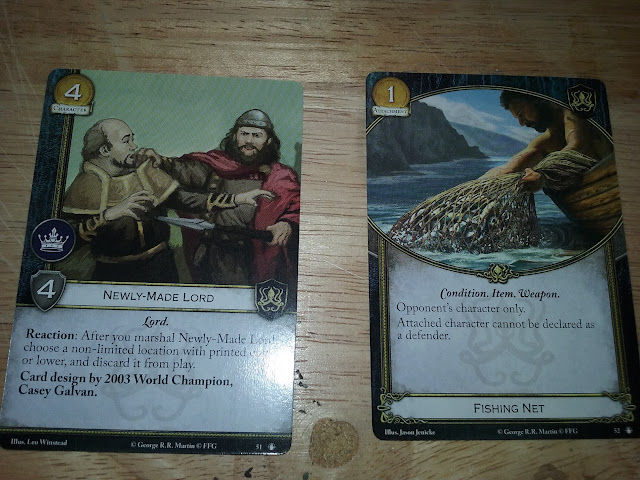 House Greyjoy gets Newly-made Lord.  He is 4 cost 4 strength with the power icon, and has the reaction, after you marshal him, choose a non limited location with printed cost of 3 or less and discard it.  Very useful for getting rid of your opponents kings roads, or such like.

Fishing net is a 1 cost attachment that you can only put on an opponents character.  When you have done this the attached character can not be declared as a blocker.  Great to shut down cards letting you go through to win challenges. 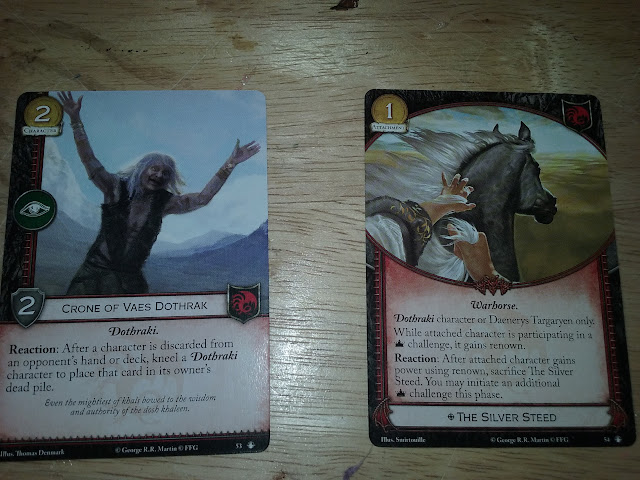 House Targaryen gets 2 cards... Crone of Vaes Dothrak is a cost 2 strength 2 card with only the intrigue icon.  Her reaction is after a character is discarded from an opponents hand kneel a Dothraki character to place that card in the dead pile instead.  Very useful when working with intrigue challenges to discard things.  The Silver Steed is a 1 cost attachment that can only go on a Dothraki or Daenerys.  Whilst attached character is involved in a power challenge it gains renown.  Very useful in itself to gain more power.  You also have the reaction, after the attached character gains power from renown you may sacrifice the silver steed to gain an additional power challenge that turn. 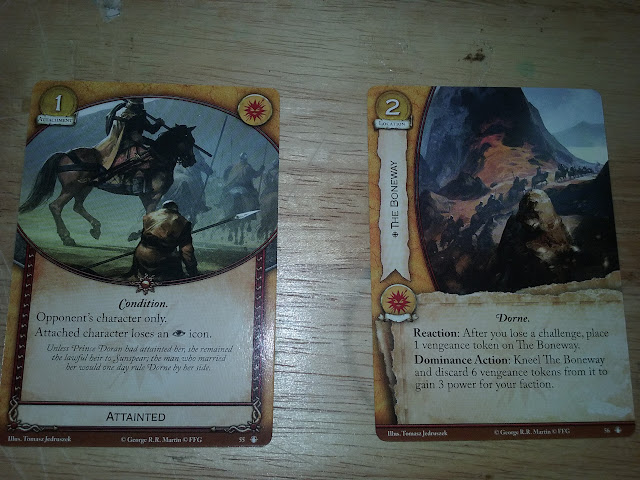 House Martell gets 2 cards in this pack.  Attainted is a 1 cost attachment that can only be used on an opponents character.  They lose the intrigue icon.  This can be huge on houses and cards that rely on Intrigue.

The Boneway is a 2 cost location with a reaction that reads..... After you lose a challenge place a vengeance token on the boneway (this can be any token).  Then it has a dominance action so this can only be used in the dominance phase.. discard 6 vengeance tokens to gain 3 power for your faction.

Another way house Martell can still be losing challenges, but win the game. 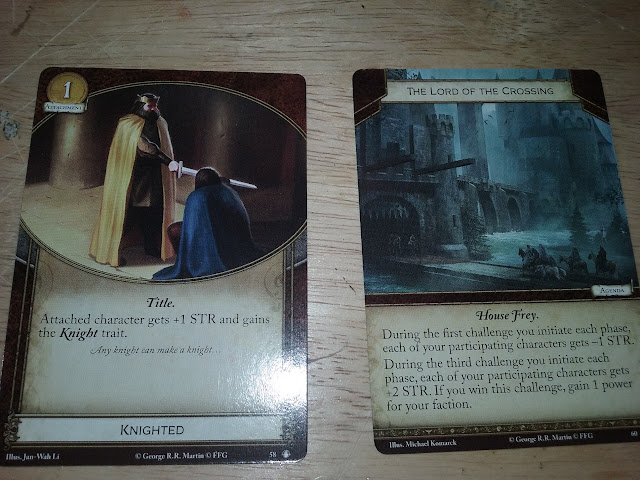 Knighted is a 1 cost neutral attachment that gives the attached character + 1 strength and the knight trait.

The lord of the crossing is the first new Agenda card we have seen.  These are added at the deck building, only one agenda can be used though.  This one reduces your strength by 1 for the first challenge of the turn, and increases it by 2 for the third challenge, but if you win it you gain a power for your faction. To to make the most of this you need to be making 3 challenges a turn. so need to build your deck with that in mind. 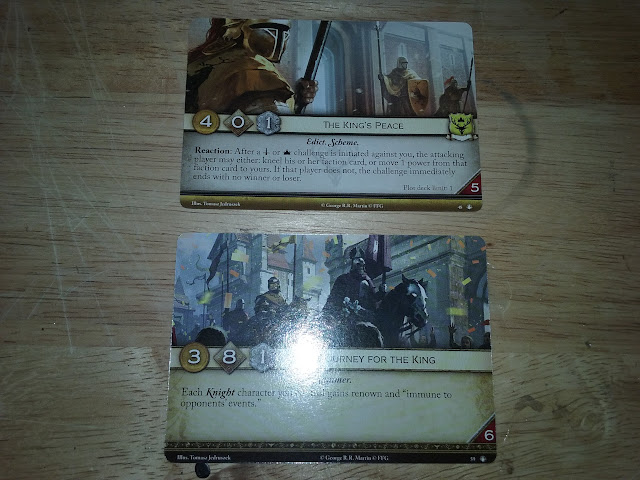 Lastly we have 2 new plots.

The Kings peace is house Baratheon only, and has a 4 income, 0 initiative, and 1 claim value.  The reserve (cards you can have in your hands when you finish) is 5.  It has the rule that after a military or power challenge is initiated against you, the attack player must either kneel his faction card, or pass one power to you.  If they do not, the challenge immediately ends with no winner or loser.

A Tourney for the king has 3 income, 8 initiative and 1 claim with a reserve of 6.  It has the ability that all Knights are immune to opponents events.  Played at the right time this can be very powerful if you have lots of Knights in your forces.


This is a great pack again, with plenty of new cards.  The fact you get 3 copies of each card is great, as it lets you add plenty of cards in, or just a splash depending on how you want to build your deck.


You can pick up your own pack to expand your choices with an RRP of £11.99 from your local game store