Its been a while since Mars Attacks hit the table top here, so we decided its time to revive our campaign, and carry on from where we where.  Mission 4. Tread Carefully.

We followed the set up guide in the rulebook, with Olivia of course in command of the Human forces, and me leading the Martian denizens. 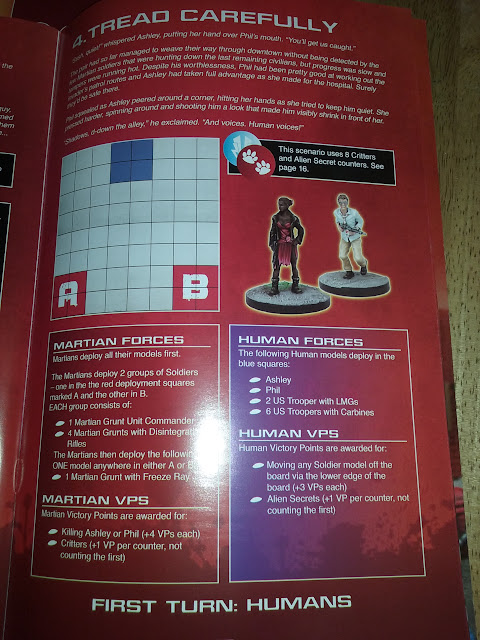 Olivia set up her forces in the centre, and mine on the flanks holding a position. They would have to get past me to win. 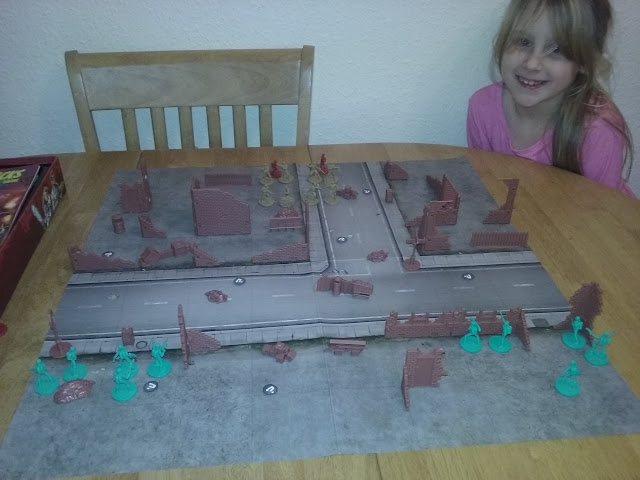 Sergeant Olivia was at base in briefing whilst her team where on a sweep of the ruins to check for survivors.  She got a call in on the radio..... "survivors located, a man and a woman, we are bringing them home".  She nodded to herself before replying, survivors where getting rarer "Roger that Bravo team bring them on home".  A few moments later whilst studying her next mission the radio squealed and hissed into life again "CONTACT! we are under fire preparing to evacu....." then the signal cut off.  Sergeant Olivia ground her teeth, and tried to contact them, but with no answer, all she could do was wait it out, and hope they made it back. 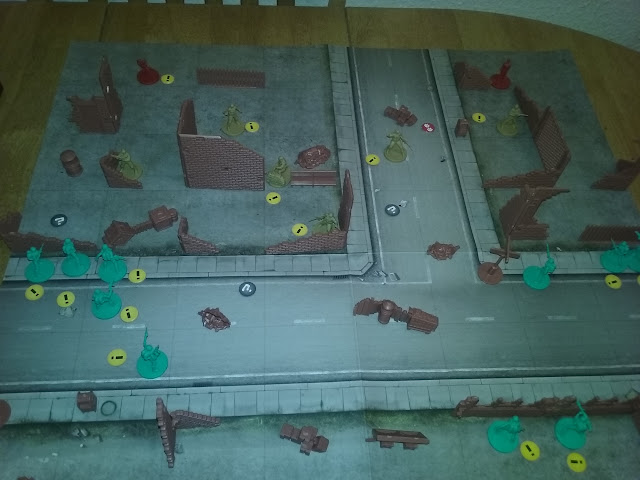 Phil and Ashley where the survivors, for the mission.  The Martians moved up to close the distance, whilst the Marines and heroes split up.  The shooting in this turn was usually out range, but one Marine did fall. 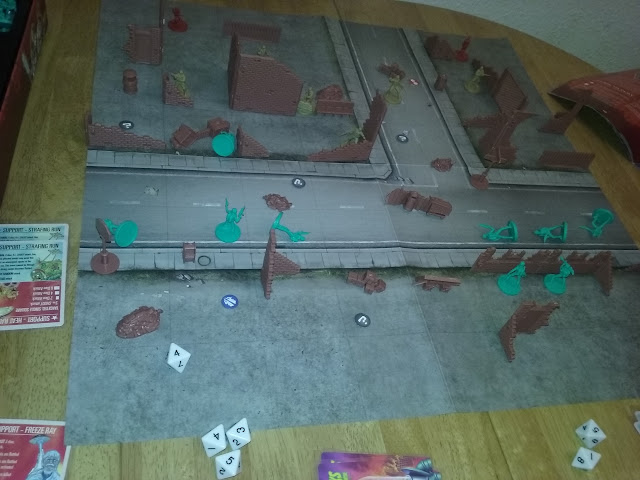 At the beginning of turn two Olivia called down a directional air strike, which forced most of the Martians on the road to dive to cover and become rattled, meaning they have to use an action to stand up.  Luckily only 1 was killed in the strike. 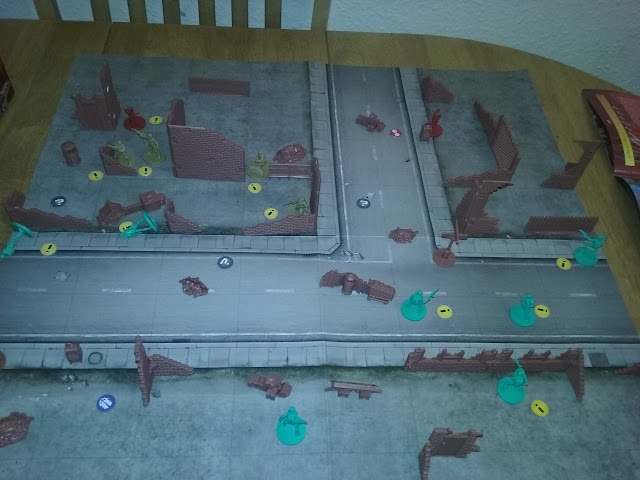 The rest of the turn was blood thirsty, leaving another marine dead, and 2 more Martians Ashley had taken a couple of nasty hits, so had to use her heroic points to avoid being killed.  Most of the marines switched to the right flank to push through there. 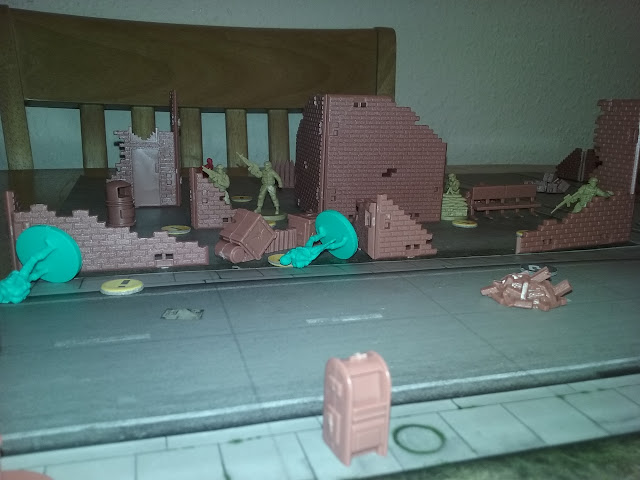 The Marines survey the carnage of rattled Martians. 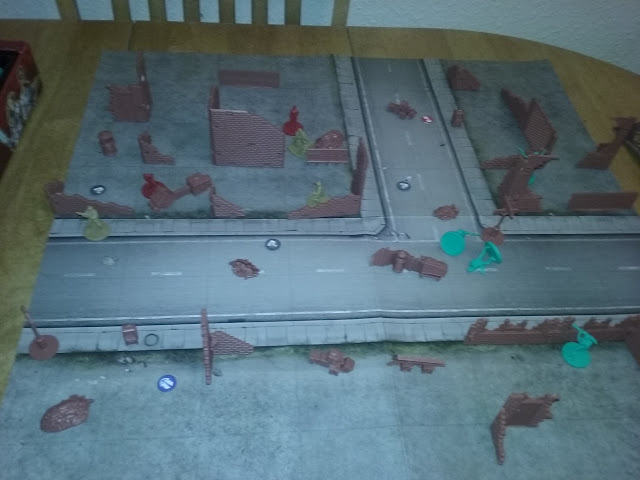 This turn the Marines swept forward into close combat and took out 2 Martians clearing the flank, whilst Phil moved forward in cover.  If he died that would be 4 victory points to the Martians. Ashley also decided being down to her last heroic point that the left flank was too hot, so she moved over to get to safety.  Another marine was disintegrated by the Freeze ray, he had done most of the killing today so should be richly rewarded after the battle. 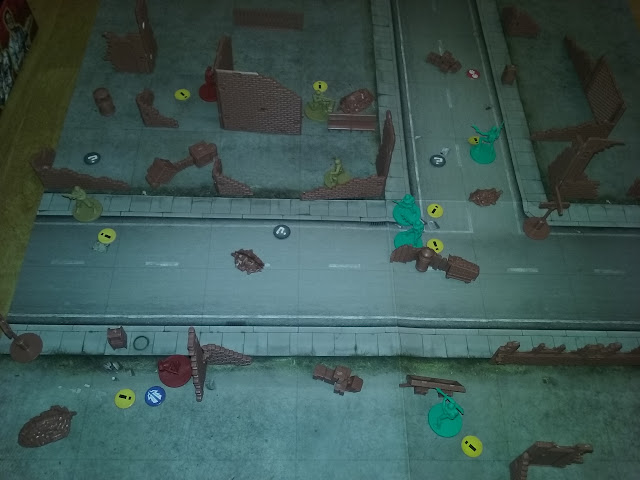 Some ineffectual firing from both sides in this turn, as the marines tried to work their way down, and Phil used a heroic point to dash out of line of site. 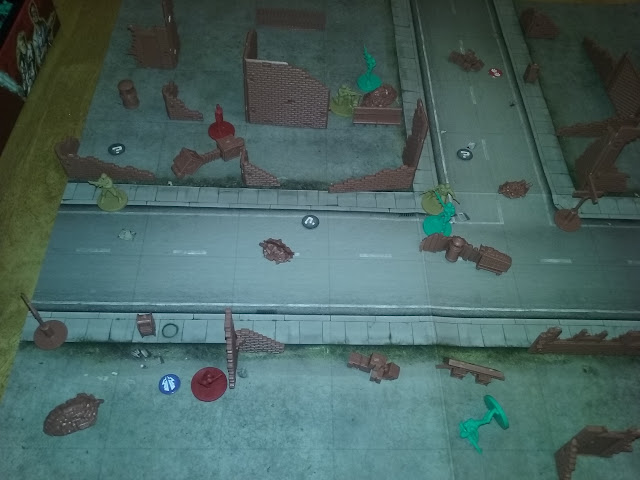 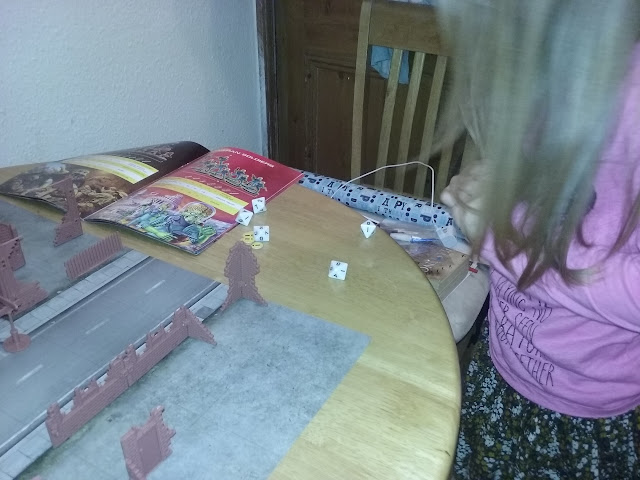 Olivia was please with her rolling ability. 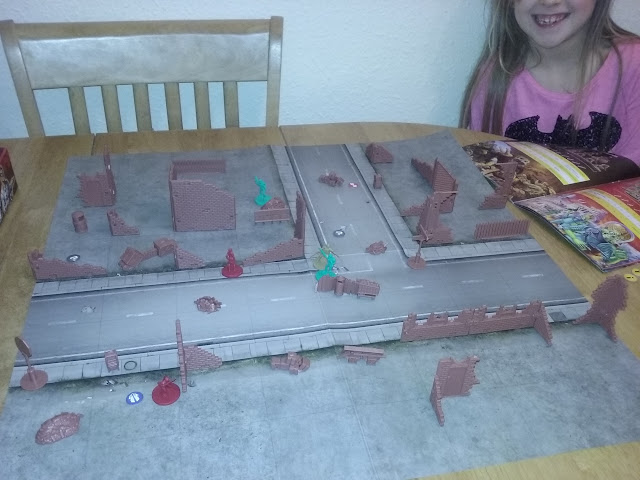 Another brutal turn, with the free ray Martian being killed by Phil, and two marines being killed in close combat, one by the Martian squad leader. 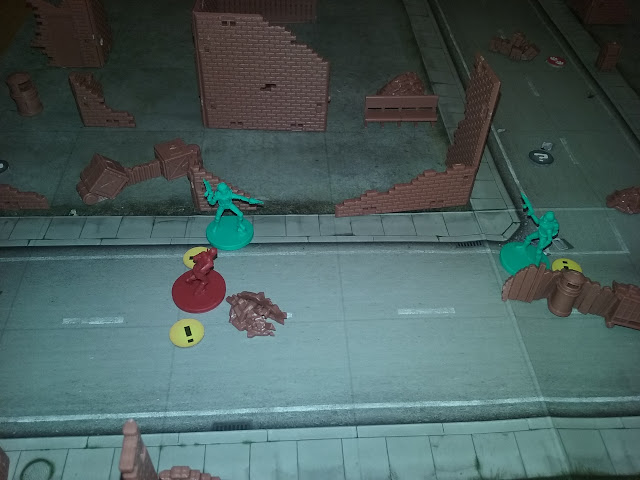 The Martian squad leader took the last heroic point from Ashley and killed her giving them 4 VPs, only Phil to get and game over. 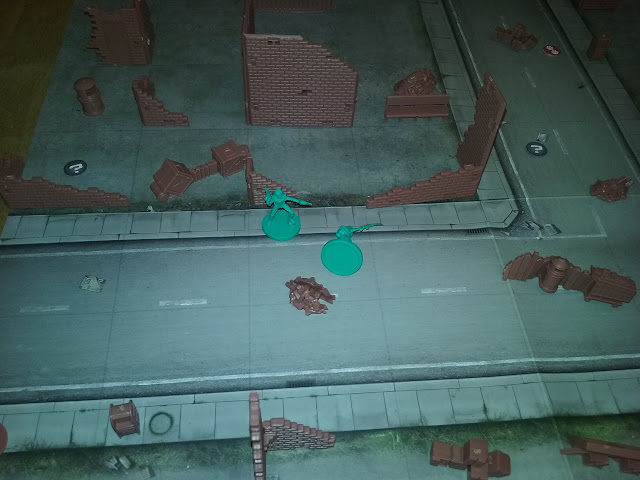 Phil was battered, and missed the Martian commander who took his last heroic point and killed him as well.  Some one was in for a promotion!

It had been 20 minutes since Sergeant Olivia had heard the radio call, and with no response she was worried.... "How long till the Drone is on their co-ordinates?" she asked the operator.... "coming up now.. visual on line" the operator calmly responded...... Olivia looked at the screen, there was movement, and glints from domed glass helmets....... nothing else moved.  she banged her fist onto the monitor. They will pay for this.........

A great game was had, I had truly forgotten how much fun Mars Attacks is to play.  Go take a look at our other Mars Attacks articles


Come and join us in all sorts of gaming chat in our Facebook group here, and come follow us on Twitter @rollyoursix join the chat, and tell us about your games!
Labels: Mars Attacks