The Robinson was a Jem'Hadar attack ship captured by Captain Benjamin Sisko and the crew of Deep Space 9 in the Gamma Quadrant in 2373.

n that year, the attack ship was carrying a Founder, a Vorta and forty-two Jem'Hadar when it crashed on Torga IV. The inertial dampers failed, killing the Vorta and the Jem'Hadar soldiers and severely injuring the Changeling. The ship crashed into the side of a mountain, embedding itself into the rock. 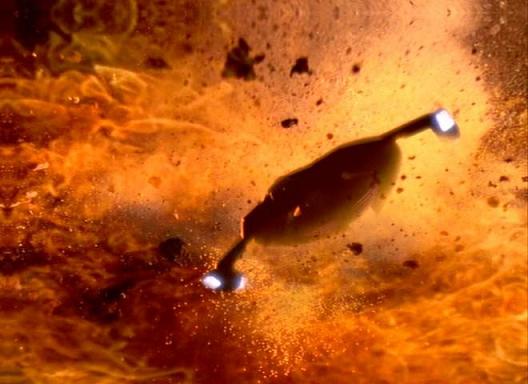 Captain Sisko and his crew, who were on the planet at the time, saw the ship entering the atmosphere and transported to the crash site. The crew entered the upside-down ship and discovered the dead occupants.
Sisko was determined to salvage the ship, calling it "the greatest intelligence find in the last ten years". Seeing the Danube-class runabout was not powerful enough to remove the ship from the surface, Sisko contacted Major Kira Nerys and ordered her to bring the USS Defiant to Torga IV.
While examining the ship on Torga IV, Commanders Dax and Worf noted that although structurally similar to its sister ships, this particular attack ship had several unfamiliar systems not found on other attack ships. 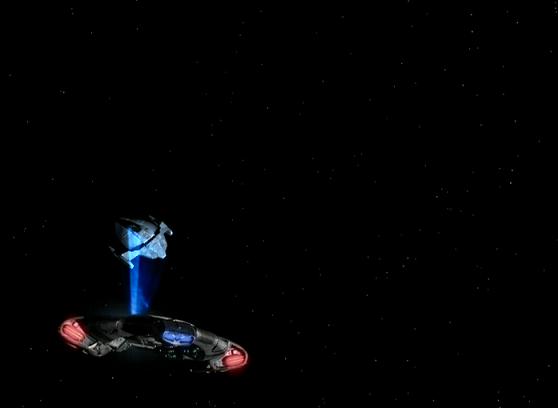 Three months into the Dominion War in 2374, the attack ship was brought to Starbase 375, where Sisko and his crew trained for two weeks on it before using it to destroy a ketracel-white facility in Cardassian space.
Several hours after the warship left the starbase, it was attacked by the USS Centaur near the border. The ship crossed the border, but the Centaur continued its attack until it detected three other Dominion ships.
Several hours later, the warship arrived at the facility, where the crew transported eighty-four canisters to the facility, one filled with ultritium and a detonator. However, soon after the facility transported canisters to the warship, it raised its security net.

The ultritium detonated early, allowing the ship to escape. However, it was caught in the explosion and severely damaged. Most serious of all, the warship's warp core matrix had been destroyed, leaving the ship without warp drive and seventeen years from the nearest Federation starbase.

Chief O'Brien began repairs, but they were interrupted by the appearance of two Jem'Hadar ships. Sisko saw a dark-matter nebula nearby and ordered Commander Dax to set a course. Just then, the ship was rocked by weapons fire and Dax's console exploded, throwing her to the deck. The ship then hit a gravitational spike, damaging it even more. It was then caught in the gravity of a planet in the nebula, and entered its atmosphere.
The ship crashed into a sea, but the crew were able to escape to a nearby area of land using a raft. The attack ship sank soon after. 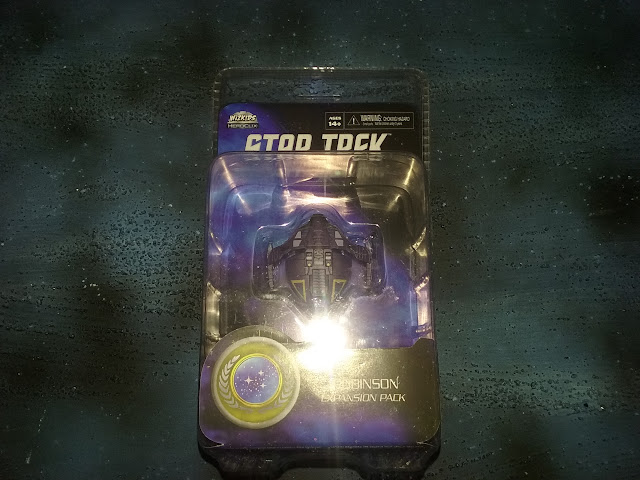 Here she is in the box, its strange seeing a Jem Hadar ship with a federation logo, but the large faction symbol is there to  make sure you are aware. 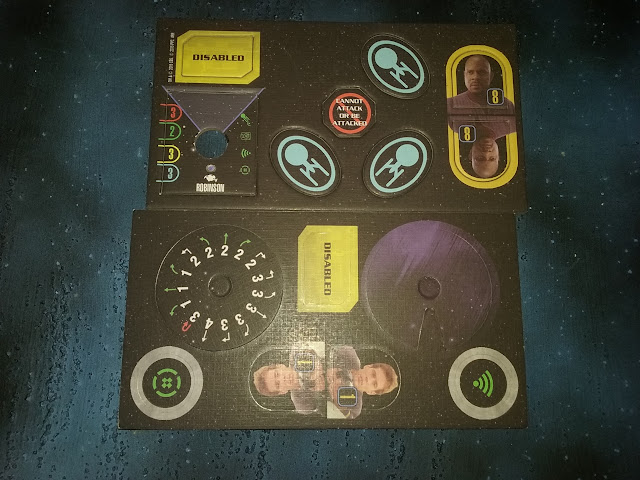 As always you get all the tokens needed to use the ship in game.  A nice touch is the generic side of the Robinsons base is a regular Dominion Jem Hadar Attack ship base. 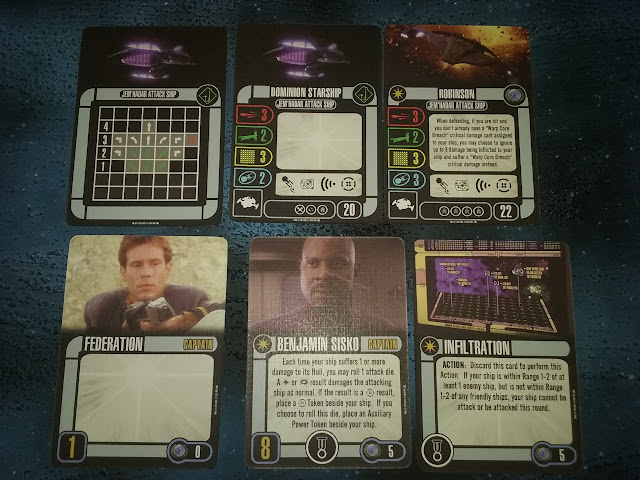 The ship is very nimble with a good selection of movement.  A nice touch is the generic ship card is a dominion one, so you can run this as the Federation Robinson, or a generic Dominion Jem Hadar attack ship.  The Robinsons stats are average, so she can hold her own for her points.  The named ability allows you to pull out Warp Core breach from the damage deck to avoid up to 3 damage, which is really useful as the ship only has 3 hull, so when you are sat on your last hull point and get hit hard you can use this to keep going at least for a bit longer.

For captain we have Benjamin Sisko.  With a captain skill of 8, he is no slouch and can hold his own.  His ability lets you roll a counter attack each time your hull takes damage.  When the hull is hit, you roll an attack dice, on a hit or a critical the attacker suffers the damage, if you roll a battle station you get to put it next to your ship.  If you do decide to use this ability to counterattack you must take an auxiliary power token.  We also get a generic federation captain.

The elite talent is Infiltration, as an action you can discard this card and you are in range 1-2 of an enemy ship, but not 1-2 of a friendly ship, your ship can not be attacked this round, but you can not attack.  This can allow you to survive longer, and also position yourself better for an attack the next turn. 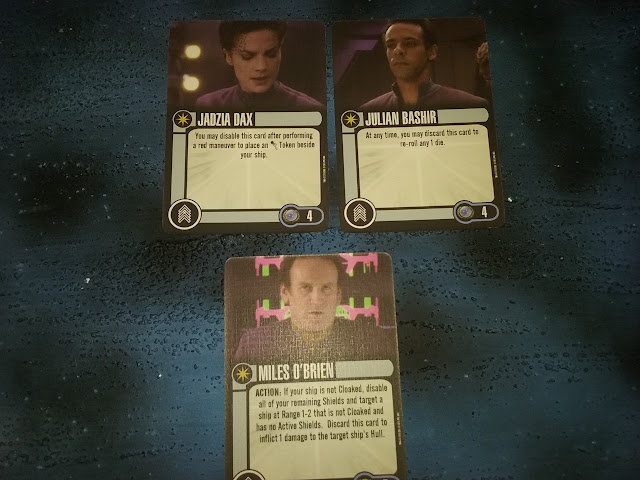 Jadzia Dax can be disabled after performing a red manoeuvre to put an evade token by your ship, useful if you know your going to end up getting attacked.
Miles O'Briens ability is an action that if not cloaked and with no active shields (with 3 shields this can happen easily) you can discard this card to perform 1 damage to a target that is not cloaked and also has no active shields.  This is a great card when you need to be sure you get that damage through to destroy your target.
Julian Bashir lets you discard him at any time to re-roll any 1 die.... 4 points for that seems pretty steep at first glance.  Until that is you think about the ships ability of taking a warp core breach.  You have to roll each turn on the breach, so Julian is there as insurance to give you another chance if you fail the roll and explode. 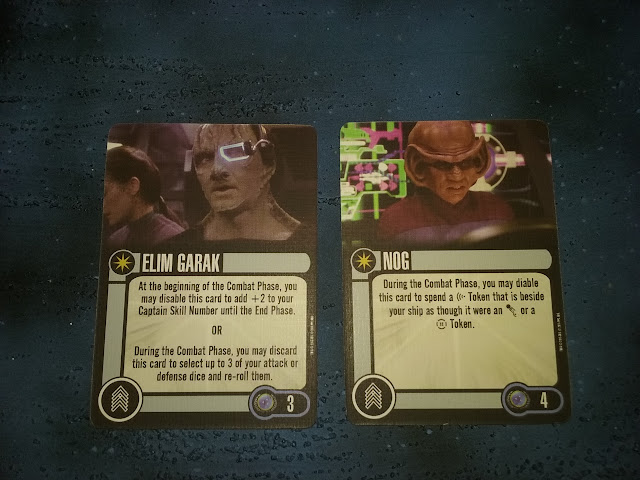 Nog provides some versatility to the ship by allowing you to disable him to spend a scan token as if it was an evade or a battle stations.  Very useful on attack and defence if needed.

Elim Garak has a couple of options, you can disable him to add 2 to your captain skill at the start of the combat phase.  This lets you bump your skill to 10, in mot cases allowing you to shoot first.  The other option you have with Garak is you can discard him to select up to 3 of your attack or defence dice and re-roll them so he gives you plenty of options to work with for more attack, faster attack, or defence 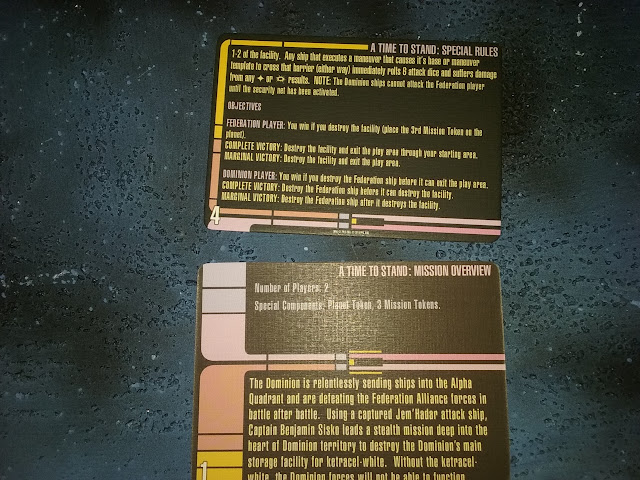 The mission in the pack is a Time to Stand, a 2 player mission trying to destroy a Dominion Facility.
As I have said before, the missions really make this game. 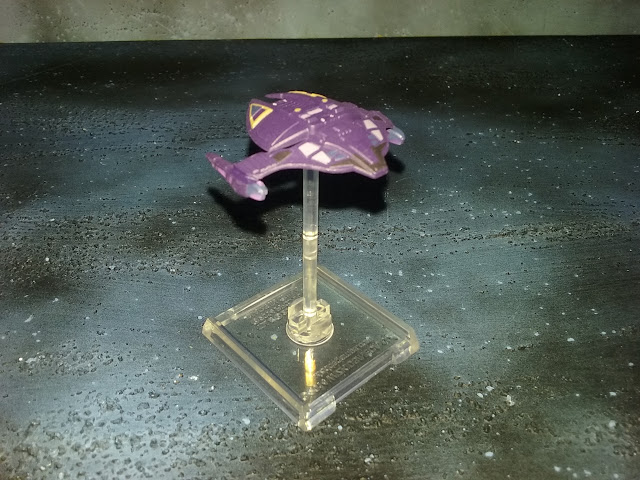 The model is the same as the Dominion one, so its a nicely detailed ship, though a wash of ink would make it really stand out and show the details. 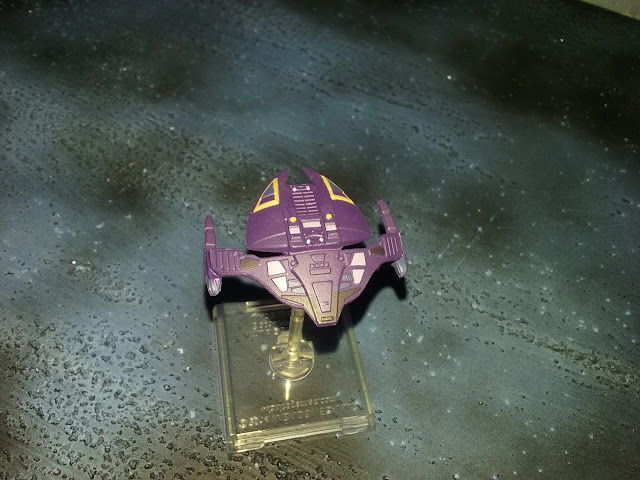 You can pick one up by finding your local game store here with an RRP of £11.99 it will add a good fun mission, some great federation cards, including a Sisko that is a great captain option, and of course it can be used as a regular Generic Dominion ship.


Come and join us in all sorts of gaming chat in our Facebook group here, and come follow us on Twitter @rollyoursix join the chat, and tell us about your games!