Heroclix has been around a while now, in various forms and ranges, though the Superhero lines tend to be the most popular and long lived.
Strange as it may sound I have played Heroclix before, though I have heard plenty of things about it in the past, so I thought its about time to take a deeper look at the models, and follow our journey in to game. 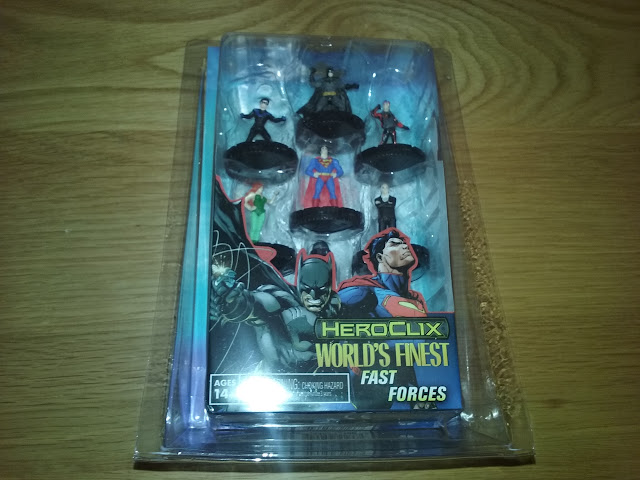 In the first stop on our Heroclix journey we will be taking a look at "Worlds Finest" fast forces.
The Pack contains six figures, and a special model (in this case a weapon pod from Batman) and all the cards you need for your characters.  Heroclix boosters are bought blind, as in boxed so you are never sure what you are getting, but with this Fast force, you can see the characters clearly, and can see the theme. 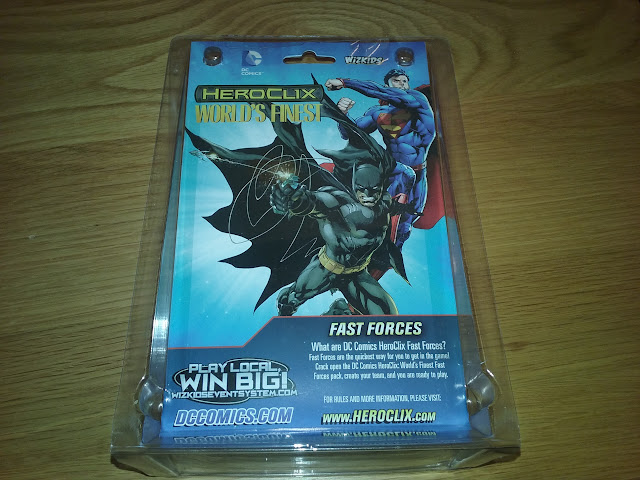 The back has some very nice artwork, and a little overview, stating that Fast Forces are the quickest way for you to get in the game. Is that the case? lets see.......

Its a mixed statement really.  The Fast Forces do not contain a play map (which you need to play on), dice (not a problem really for most gamers) the rules and powers and abilities card (which can be downloaded here) and the tokens for objects, and effects.

If you are just getting into it with some friends, or yourself then this may not be the best way to start, but if its played in your local store, and you want to jump into the organised play scene (you can find your local store here) then is a very good start, as you can download the rules and stats for free, and this provides plenty of options for a themed team to jump in and play. 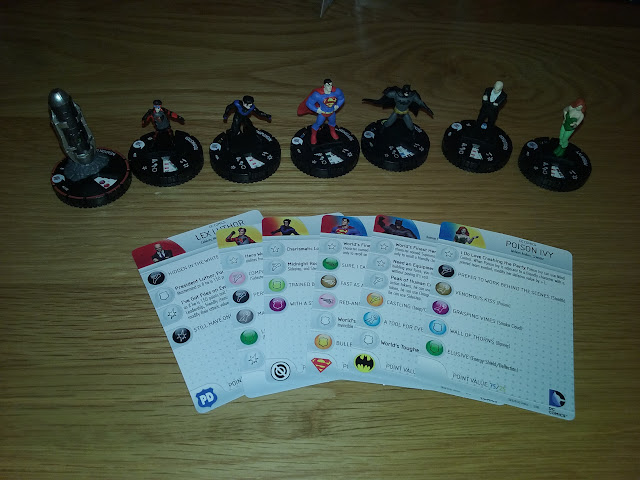 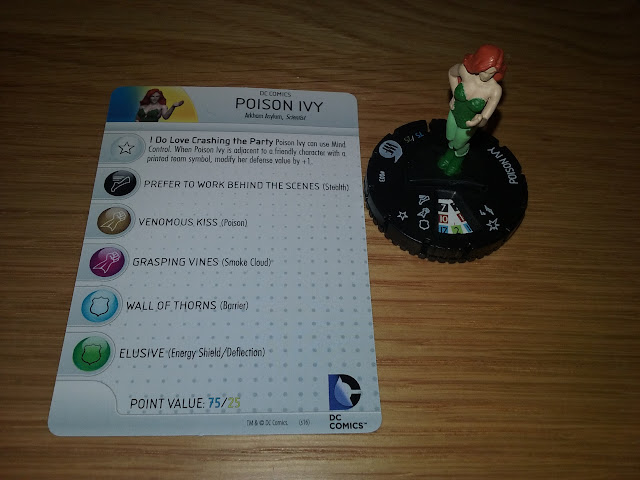 With each model you get its abilities card.  The colours on here link in with the colours on the dial as they change when you take clicks of damage.  Poison Ivy is Olivia's favourite from the pack.  though she does not do massive amounts of outright damage, her other abilities make her dangerous, such as Poison. 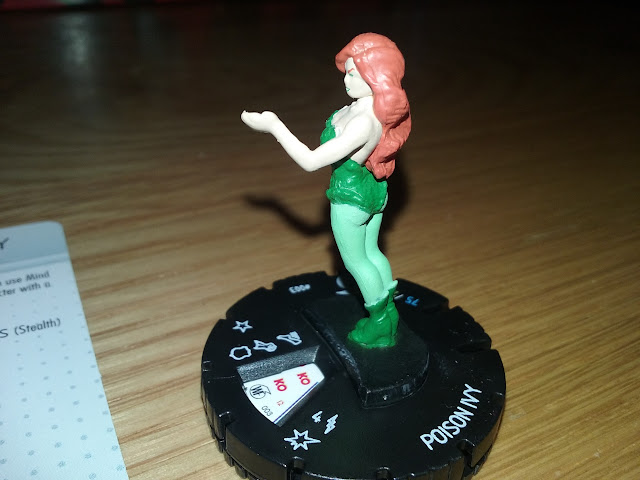 I really like the model I have to say, I had to rescue it from Olivia who wanted to stash it away with her collection of toys.  The paint work is neat, and the figure is well sculpted. 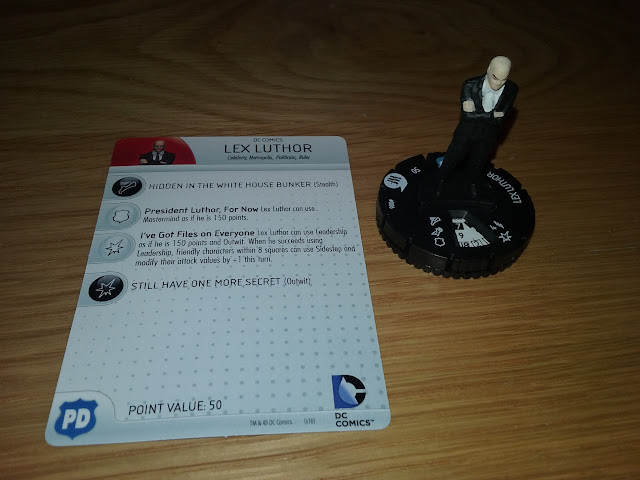 Next up we have Lex Luthor, Superman's classic rival.  At 50 points he is a cheap choice (standard team games seem to be around the 300 point mark) 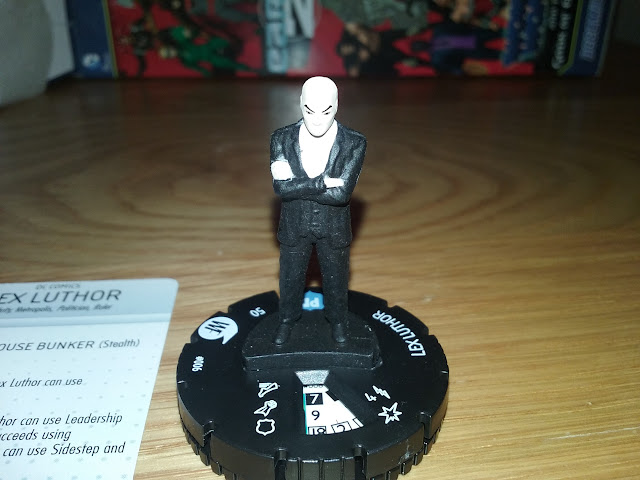 The model has the classic bald look and smart suit style you would expect from Lex.  Its nice to have two well known villains in the pack in Ivy and Lex. 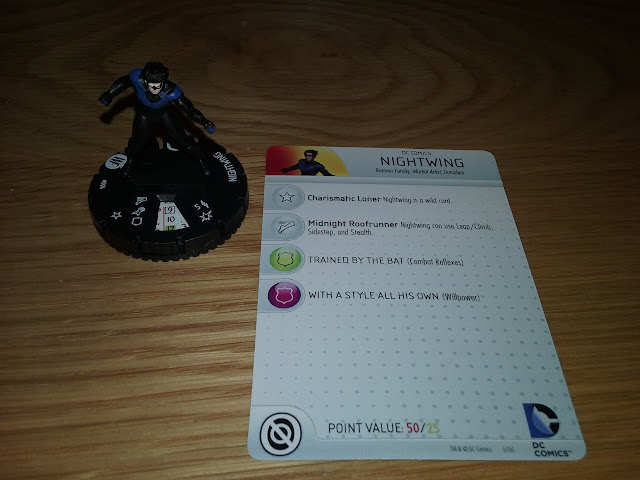 Next up we have Nightwing, playable at two different point levels 50 or 25.  You adjust the dial to the relevant starting place, of course the stats of the 25 point one aren't as good, but its a very cheap character to get on the table, and can pack a punch in close combat. 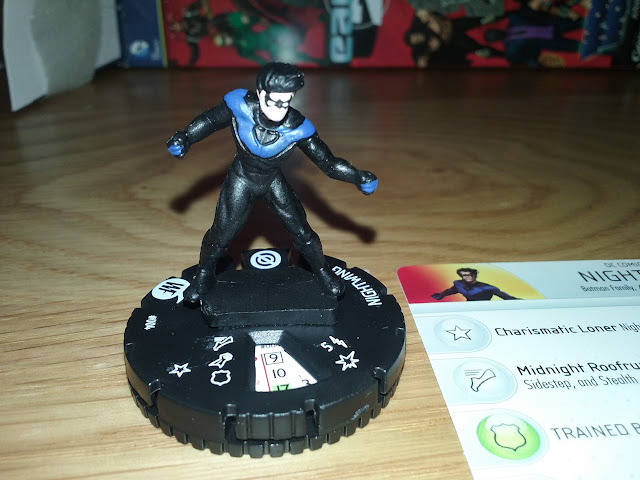 Again the model is nicely detailed, with a good paintjob.  I do not know too much about Nightwing as a character, but between this and other Superhero games such as Dice Masters I am certainly catching up. 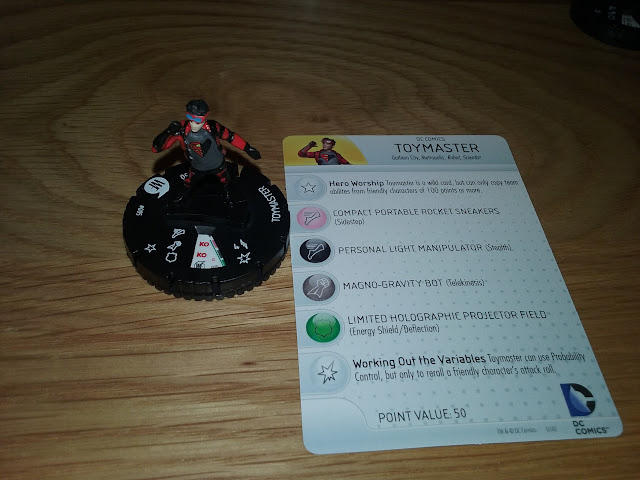 Next up we have Toymaster.  Not a character I have come across before, but a quick Google gave me an idea, and from the background I read he seems to be well represented, and is another cheap option at 50 points. 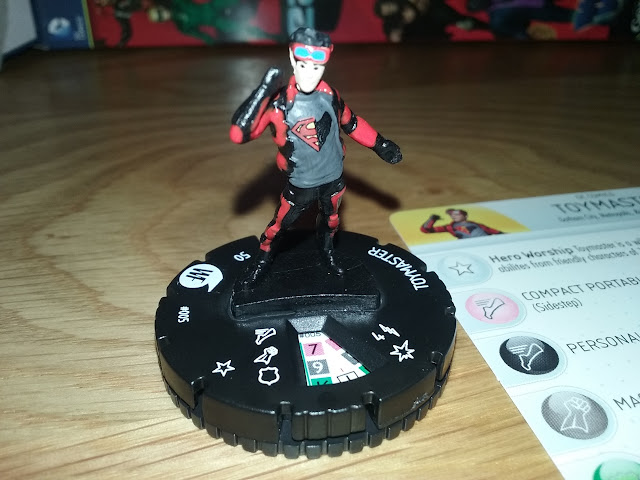 Again it is a nice model.  I particularly like the half Batman half Superman shirt, that's a nice touch, and the paintwork is well done. 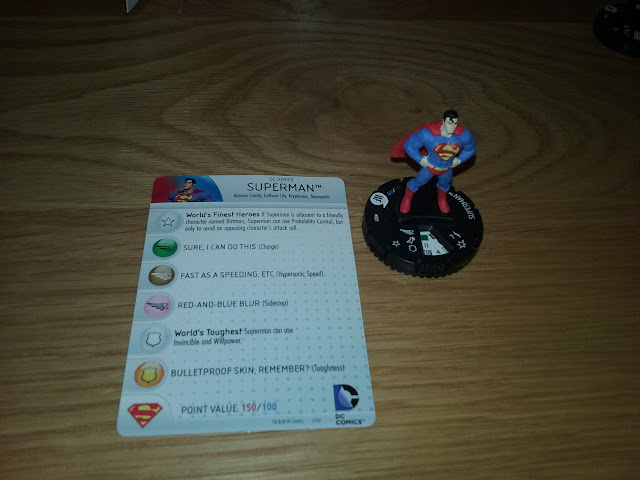 Now onto my favourite Superhero, Superman.  The sculpt is the classic pose, and of course he is in his iconic suit.  Weighing in at either 100 or 150 points, he is a beast.  He hits hard, has great defence, moves fast with flying, and of course has plenty of other abilities, and a long range attack as well. 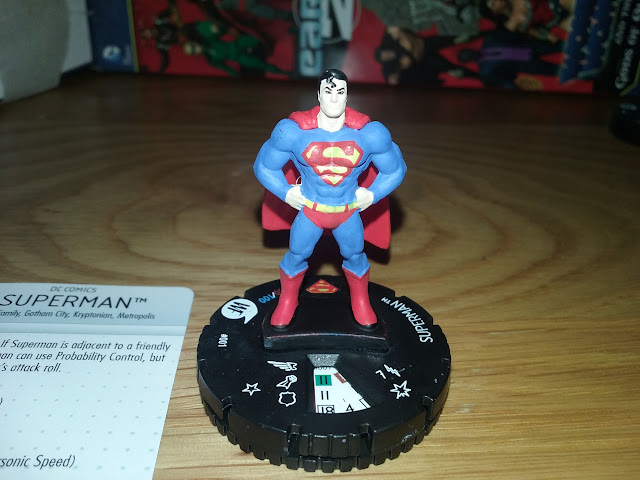 The model is great, I love the pose, the paintwork is good with the classic S on the chest being painted on instead of a transfer. 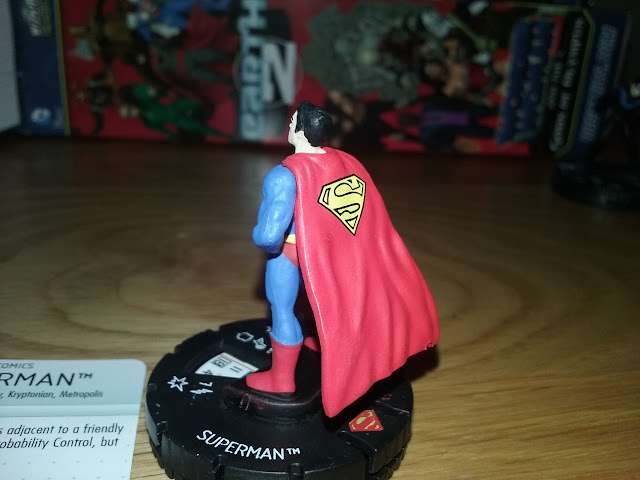 The ripples of movement are nice from the cloak, and It also has the S badge on.  Definitely my favourite model from the Fast Forces pack. 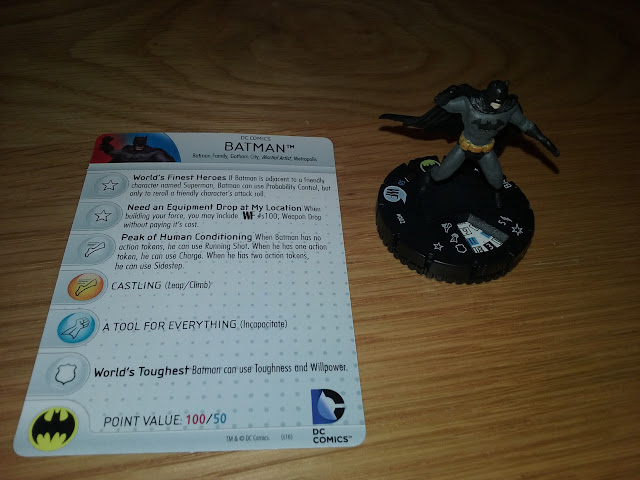 Batman again comes in two point options, 100 or 50, has a ranged attack and a large selection of abilities.  combined with good damage and good defence he will be a threat for sure on the table top. 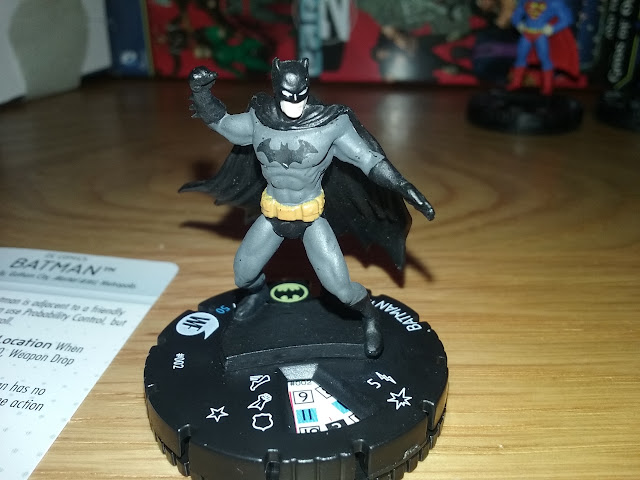 He comes in a dynamic pose,  and again is a nice model. 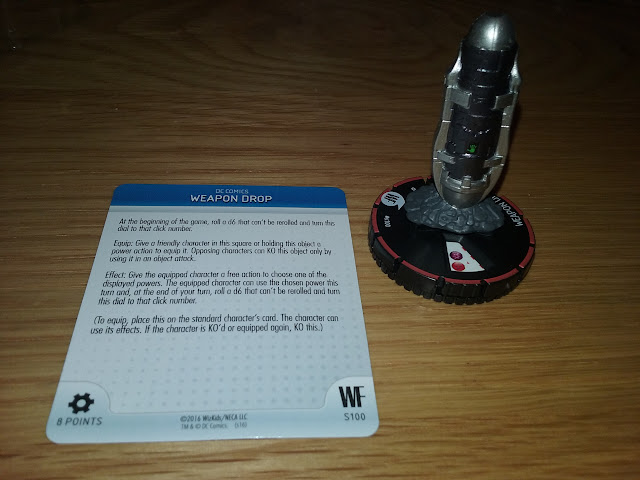 Lastly we have the weapon drop, I recognise this from playing the Batman Arkham series of games, and I like the fact it even has the little painted on hand scanner.  This adds new abilities to your team by a random roll of the dice to see which click it will display for that turn.

I really like the pack, the fact you get Superman, and Batman as well as two iconic villians makes this a great starting pack, and with a good points spread value makes it really easy to build themed teams to get playing.


Find your local store here, and grab a pack. With an RRP of £14.99 it is a good addition to your forces if you already a collector, or a good way to start jumping into organised play.

Stay with us to see more of our journey into Heroclix, including boosters and seeing it in action on the table top.