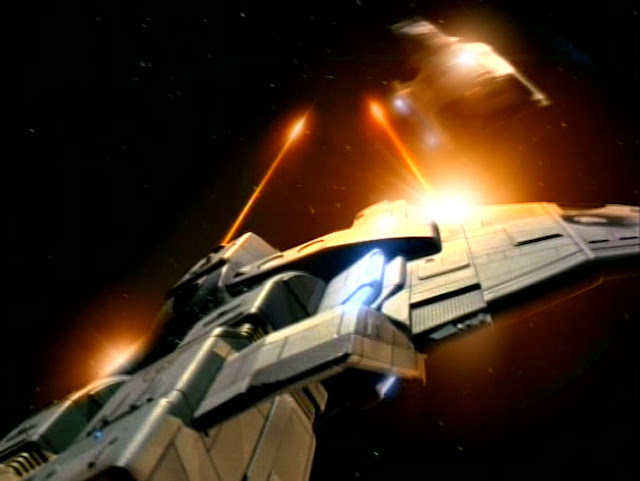 So lets take a look at the set, this is a different kind of pack to the normal capital ships 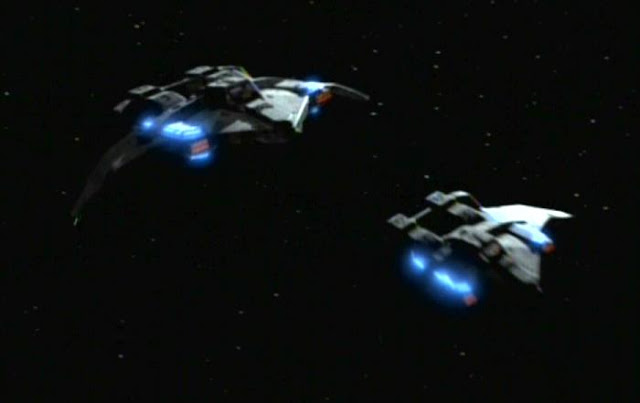 ﻿
Lets take a look at the goodies 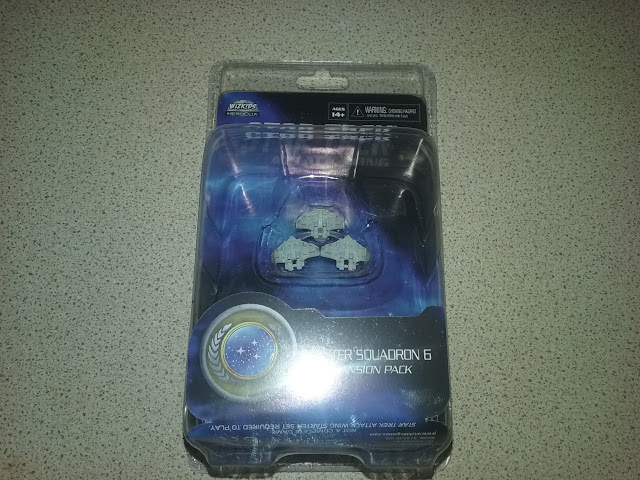 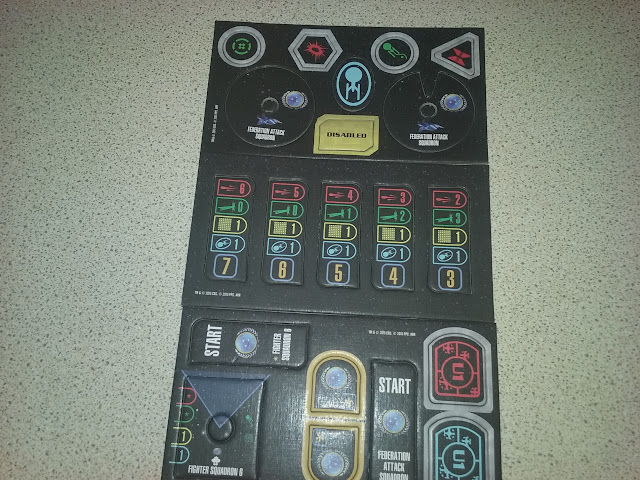 Plenty of card in this pack, including some we have not seen before which are for the fighters 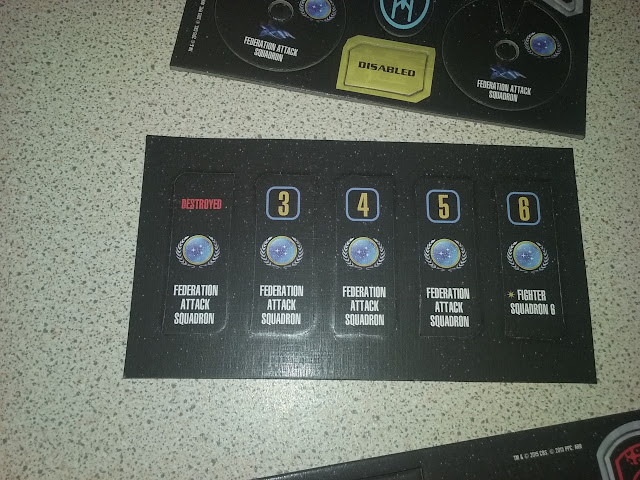 They work in a different way to the other ships we have seen before. 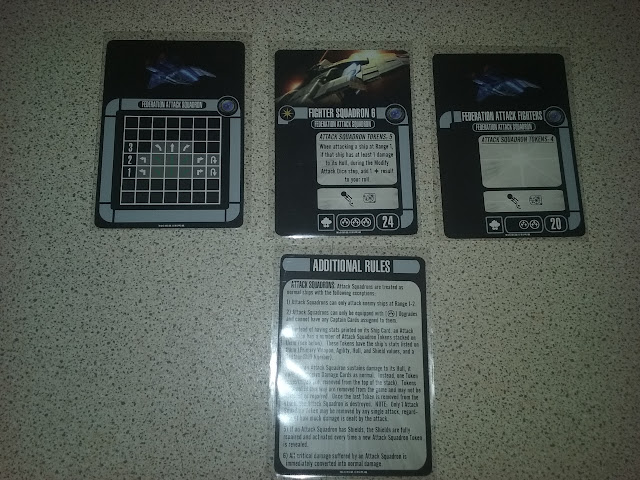 The fighters are not fast, but they sure can move! 1 white come abouts, 2 white come about, plenty of green and no reds.  The fighter cards come with a whole set of rules, fighters can only attack at range 1-2, not range 3.  And they way they take damage is very different but we will come back to that.  The named fighter squadron only has two actions, evade and target lock.  It can take 3 squadron upgrades.  and has a variable captain skill, we will see how that works later.  You also get the generic fighters. 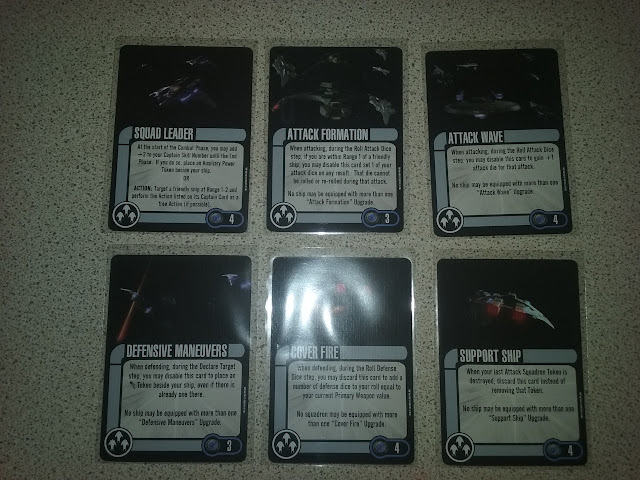 You do get a large selection of squadron upgrades that perform various abilities.  Squad leader adds plus 2 your captain skill for an auxiliary power token, or you can use it as an action to target a ship at range1-2 and use that captains action.  Attack formation allows you to set a dice on anything you choose.  Attack wave is a disable to add an extra attack dice.  Defensive manoeuvres allows you to add an evade token to your ship even if you have one, again its a disable.  Cover Fire is a discard but allows you to roll an extra amount of defence dice equal to your attack dice.  Support ship provides more survivability. 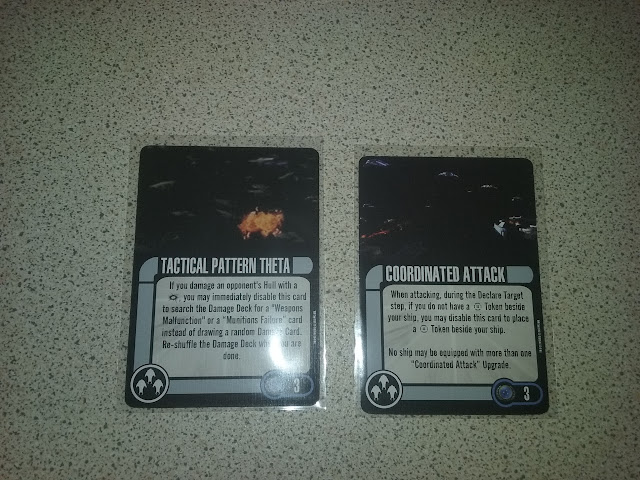 Tactical Pattern Theta allows you to pick a weapons malfunction or munitions failure from the damage deck if you hit a hip with a critical, reducing their ability to fight back.  Coordinated attacj can provide you with a battlestation.  Most of these cards are simple disables, meaning the squadron can do all sorts of things. 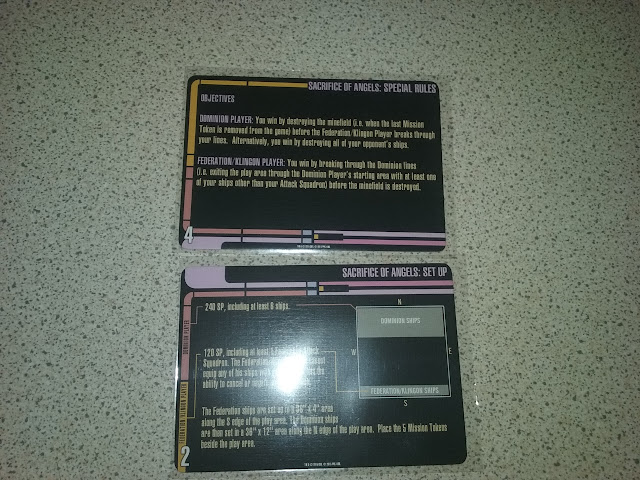 The mission is Sacrifice of Angels, a great episode of Deep Space 9, and heavily balanced in favour of the Dominion, it looks like great fun though. 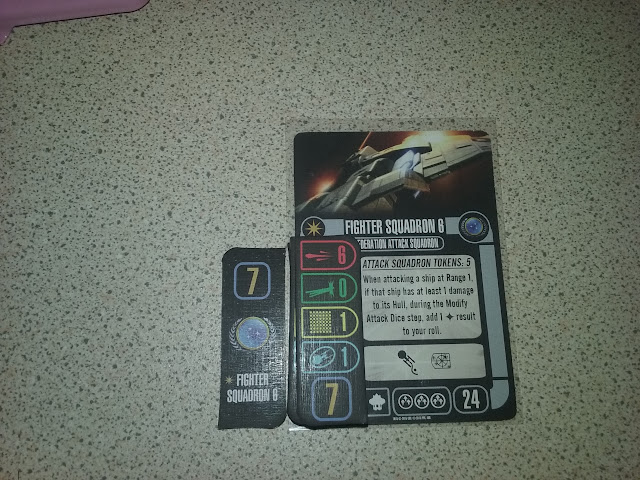 So heres how the tokens work earlier, they are stacked up on the ship, so you start with a captain skill of 7 and a firepower of 6, pretty respectable.  Each time you are hit for damage that penetrate your shields and hull you remove a token that changes.  It does not matter how hard you are hit you only ever remove one token from each attack source, making these ships very very durable. It also works in theme, as the squadron is getting thinned out in battle. 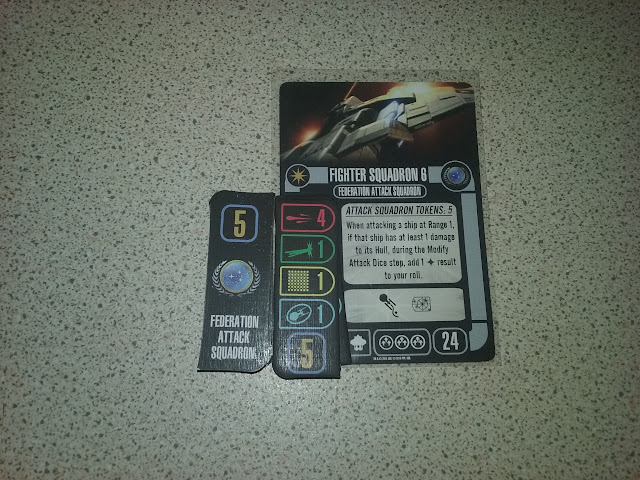 As you can see, the more tokens you lose, your stats change, reducing your effectiveness. 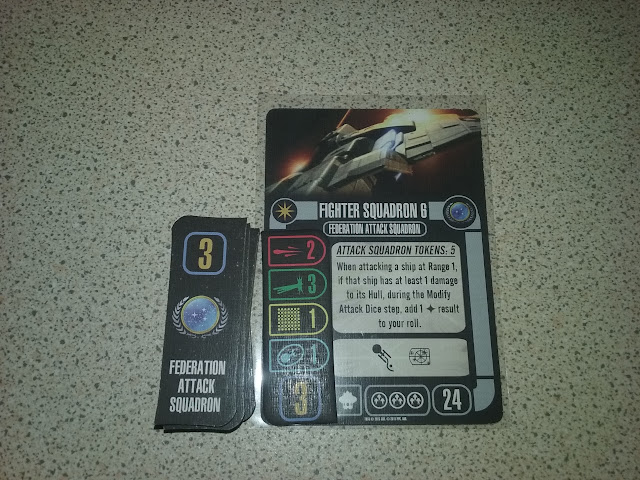 when you start getting low you can the ships become lower in attack and skill, but evade goes up as the fighters thin out its harder to hit the last remaining ones, who do less damage. 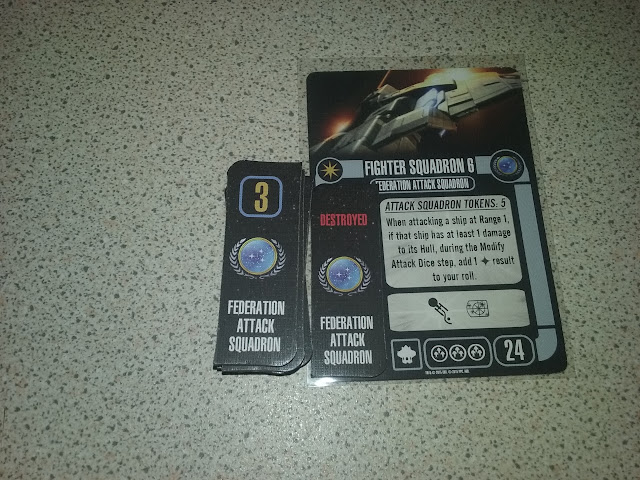 As you can see the ship is destroyed when the final token is removed. 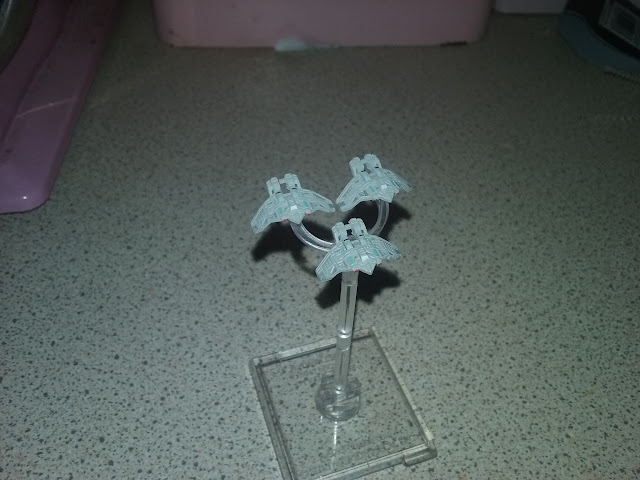 The models are pretty good, and resemble the ships from the show very closely. 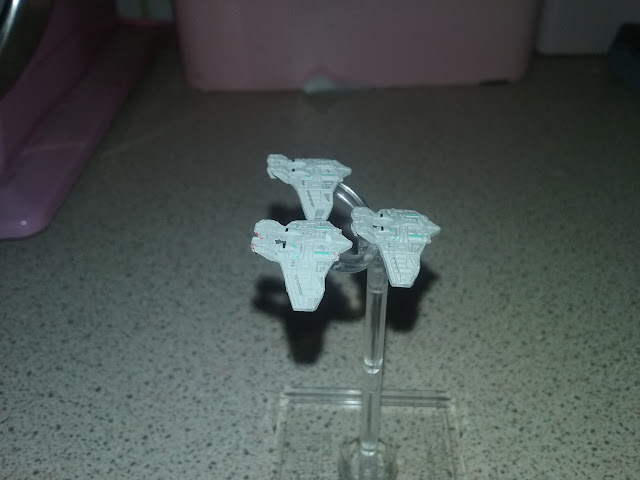 They are small, but very detailed ships, not even too bad a paint job, though as always a wash will help. 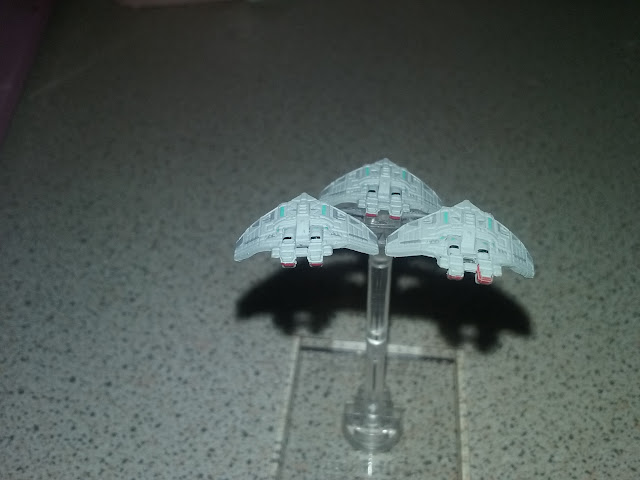 You can see plenty of detail on the models. 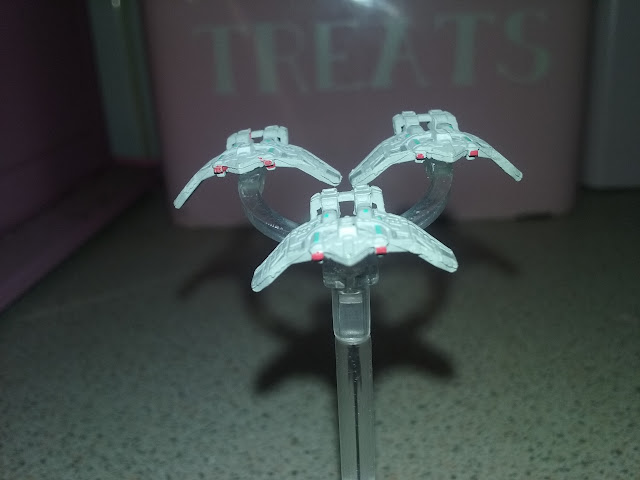 They are a very scary proposition to face 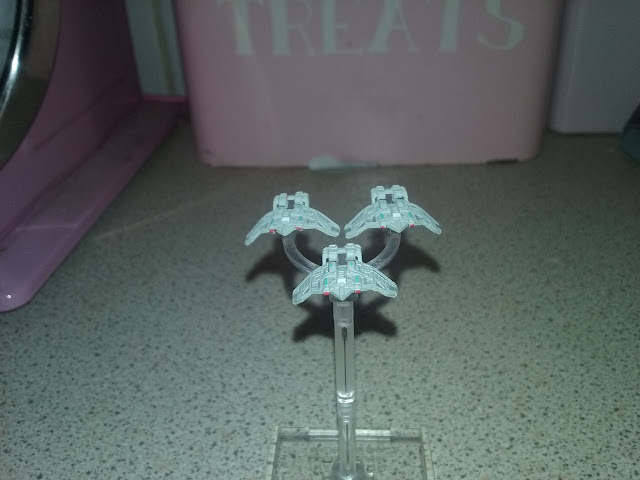 A great pack to provide something new to try in game!