Today I am lucky enough to take a look at Dobble.  So what is Dobble? well.... Dobble is a speedy observation game where players race to match the identical symbol between cards. Reliant on a sharp eye and quick reflexes to play its suitable for adults and children alike. 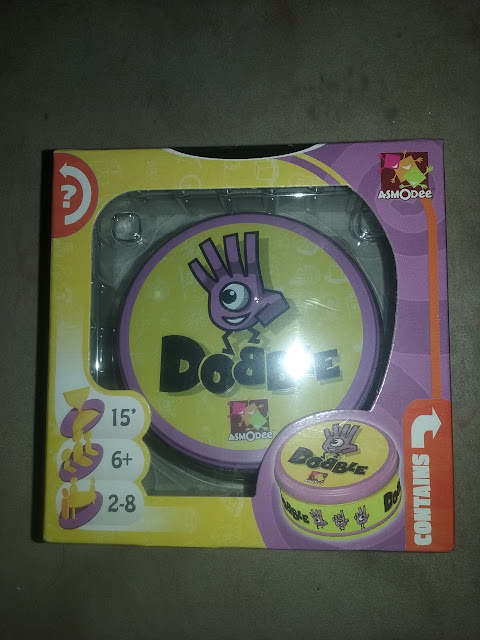 Dobble comes in a nice colourful box with the play time, age range and player number clearly marked.  The time is about right, sometimes its quicker but it never outstays its welcome.  The age range is about right as well, Olivia (6 years old) got the idea quickly and was soon beating me.  You can play from two players upwards its true, but I think the "sweet spot" is from 3 players on, which is good as there are not many 3 player games that work well. 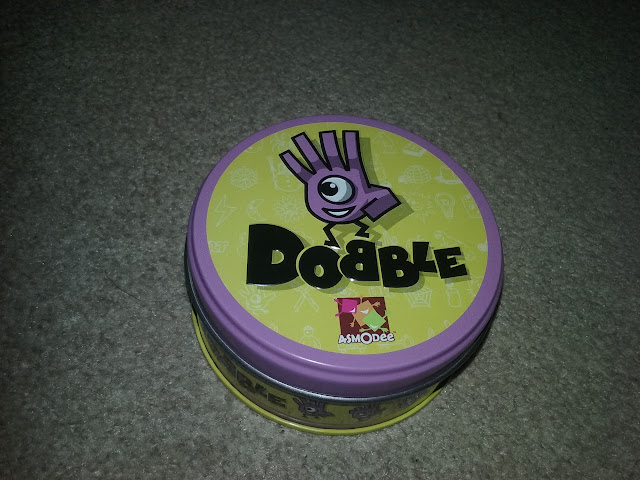 Inside the box we have a nice metal Tin, Small, self contained with everything you need to play in it, making it nice and easy to transport. 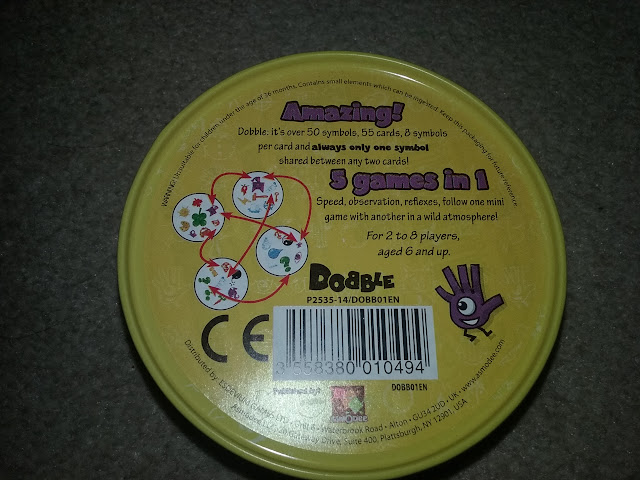 
Lets take a look inside the Tin.  You get a thin rules pamphlet, another showing some other games and the cards. 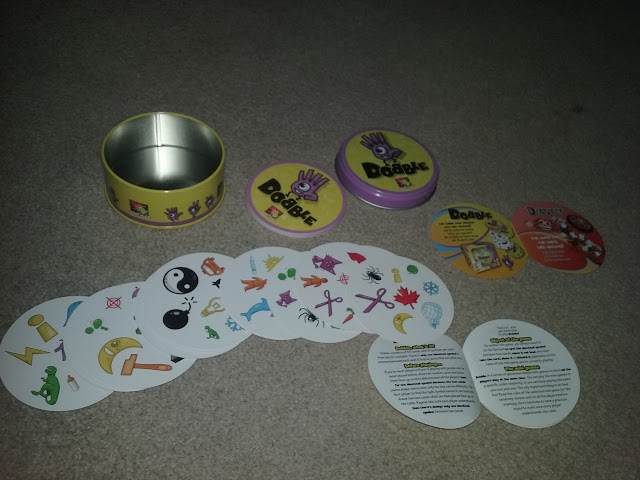 The idea is players compete with each other to find the matching symbol between one card and another. Every card is unique and has only one symbol in common with any other in the deck. 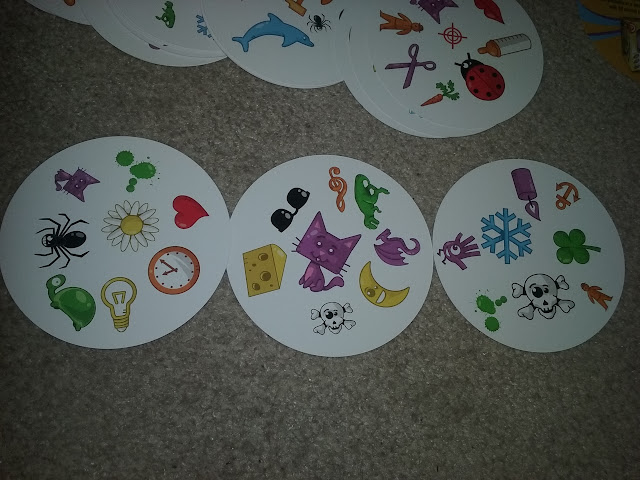 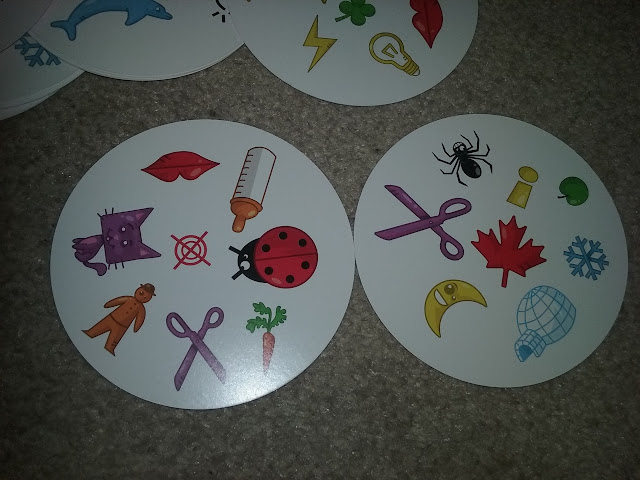 The size and positioning of the symbols can vary on each card adding to the challenge. As the game is based on reactions and visual perception, rather than knowledge or strategy, there is no advantage for adults over children, making it the perfect family game.  You just call out what matches between your card and the objective one.  Its such an easy game to teach its ideal to play with the family, and also due to its simplicity and speed of play a great adult party game.  Things can get noisy with people calling out what they think matches, but it adds to the chaotic fun that can happen.
There are five mini-games in which all players play at the same time. You can play the mini-games in a specific order, randomly, or you can keep playing the same one over and over, they do not take long to complete, and are fast and furious.  By having a variety of mini games all explained simply it provides a long life for the game.

The idea of the game is to be the fastest to spot the identical symbol between two cards, name it out loud and then take the card, place it or discard it depending on the rules of the mini-game that you have chosen. 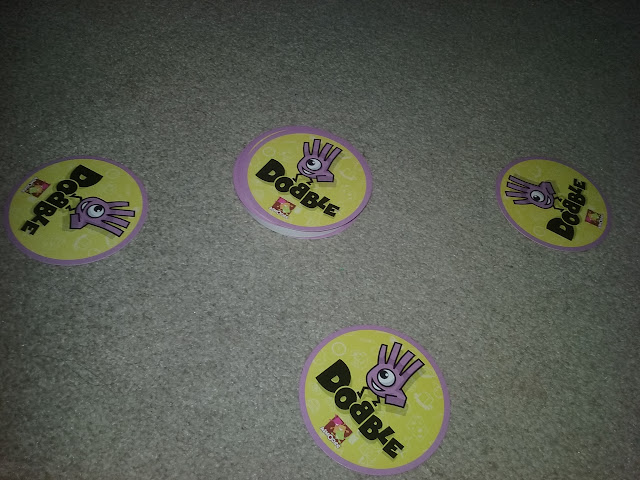 Here is one of the mini games in action, you start with one card each and a large pile in the middle, you flip the middle card, then all players flip their card at the same time.  First to call out the correct match claims the card, then it begins with the card below.  Since all of the cards have one match with every other card you are always in the game. most cards wins 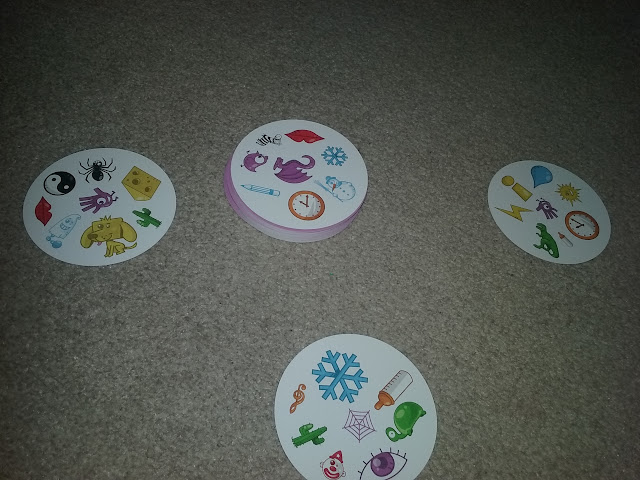 There is plenty of variety for such a simple concept, and Olivia and I went through all the mini games in pretty quick time.  She liked it as it was easy to learn and fun to play, it helps with visual recognition, and you really have to think fast to play it.  Would I take it to a game night with more "Hardcore" gamers? yes.  Its a great filler game, light and fun that EVERYONE no matter age or taste can play, from a family game to a an adult party game, break out Dobble with a few beverages of your choice and watch the fun happen.
Olivia Says....  I like it, its easy to learn, and I like the colourful pictures, and I like beating Dad.

Its a great addition to a games collection, its easily portable and can be learnt in less then 30 seconds, what's not to love.
Dobble is  available for £12.99 at Waterstones, or online from WHSmith, Argos or Tesco Direct and add it to your game collection.  For that price the amount of fun you will have with it is a steal.
Labels: asmodee games family games