Its always a great time to get to look at new ships for the excellent Xwing Game, and this pack is certainly no exception.  Themed on the Force awakens film we get the new (old?) Falcon, and Poes pimped out T70.

Rey, Finn, Poe Dameron, and the heroes of The Force Awakens fight for freedom with the Heroes of the Resistance Expansion Pack for X-Wing™. Featuring new sculpts for the Millennium Falcon and Poe Dameron’s black-and-orange T-70 X-wing, Heroes of the Resistance also expands your fleet with three unique X-wing pilots, as well as new versions of Han Solo and Chewbacca. Meanwhile, the pack’s eighteen upgrades introduce new elite pilot talents, Tech upgrades, and unique Title upgrades for both the Millennium Falcon and Black One. 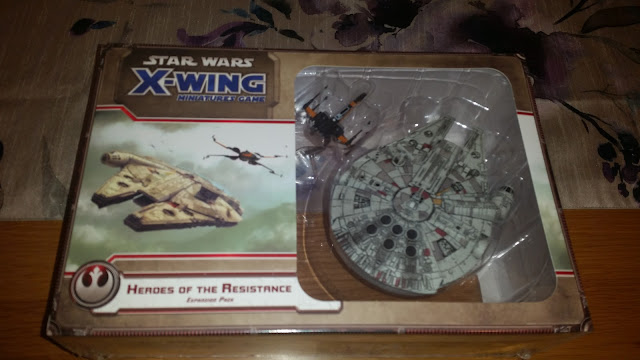 It comes in the nice hefty box all the "Ace" style expansions do, so lets pop it open, see what comes inside...... 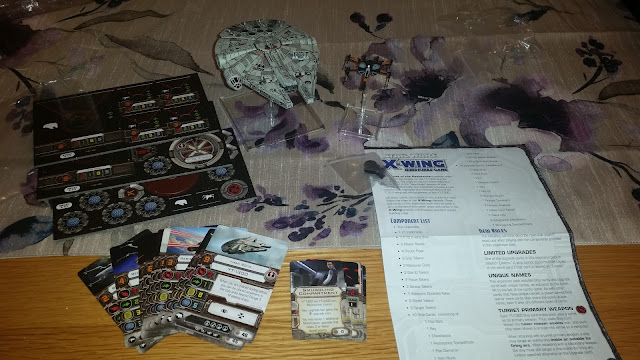 You get plenty in the box, the models, stands, dials, all the tokens you need for the ship and the mission... yes the aces packs come with a mission! (I wish all the ships did like Star Trek Attack Wing) and a ton of cards. 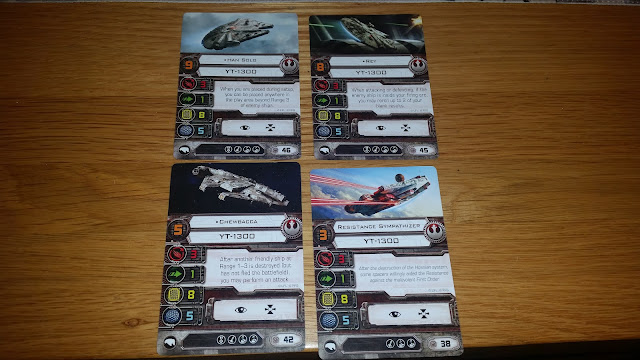 looking at the Falcon first, we get another version of Han Solo, who can play around with his deployment and potentially ignore deployment zones.

Rey can really help you hit harder, letting you reroll up to two blanks if an enemy is in your front arc, yes the falcon still has her 360, but keeping targets in the front will maximise damage.

A new version of Chewbacca, who lets you get a free attack after a friendly ship in range 1-3 is destroyed, great if you want to run a swarm list of expendable ships.

the Falcon choices are rounded out by the generic Resistance sympathiser, who is still a solid buy keeping that primary attack at 3 unlike the cheaper unnamed versions in the original falcon pack. 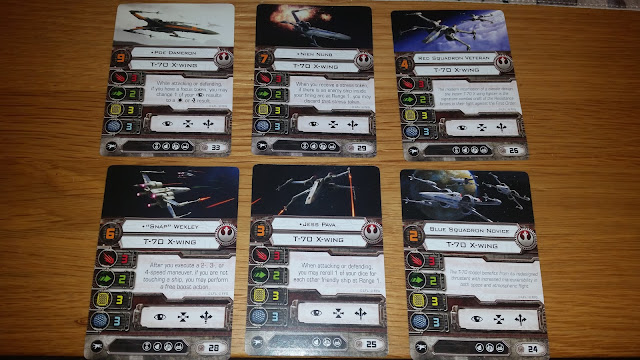 The T70 providews you plenty of variants of names pilots, great to spice your core set version of the T70.

We get Poe again, a slight variance from the core set version by letting you change a focus result into a hit or an evade if you are attacking or defending. nice and useful.

Nien lets you discard stress if you are in range 1 of an enemy meaning you can fling the T70 around in some strong turns so long as you end up close.

Snap Wexley  lets you get a free boost action if you are not touching an enemy ship after you do a 2, 3 or 4 speed maneuver which is excellent, really helping to set you up for those shots, ( I think he may be my favourite in the pack)

Jess lets you reroll a dice attacking or defending for each other friendly ship at range 1, great when you are flying close formation.

Lastly the Red squadron veteran, and the Blue squadron novice round out the pack for generics. 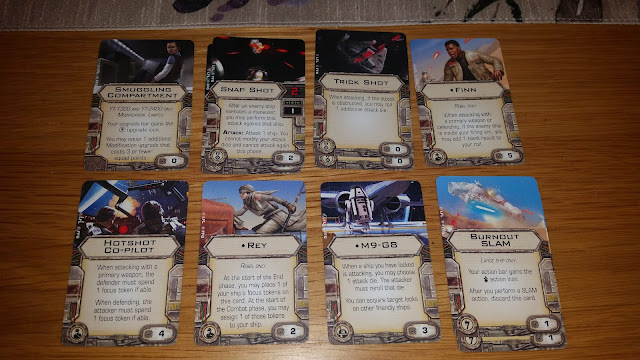 You do get a ton of upgrades in the pack, and multiples of some as well.

Smugglign compartment can only go on the Yt1300 or the YT2400 (so useful for Dash as well).  Its a modification that gives you the scum upgrade on your bar and lets you equip one that's 3 points or less.
Snap shot lets you interrupt a ships movement to attack, though you cant for the rest of the round, but its handy for high pilot skill ships who may want to take a target of opportunity.

Trick shot gives you an extra attack dice if the target is obscured, helping to mitigate the extra defence dice, nice if you want to fly tricksy style.

Finn is a crew option who lets you add an extra blank dice if your target is in your front arc whilst attacking.. now what's the point of adding a blank dice I hear you ask?? well.... if you have a target lock its an extra one to reroll, or if you use him in conjunction to Rey she can reroll two blanks.. so he's really increasing your firepower potential.

Hot shot co-pilot is another crew upgrade, and it forces your enemy to ue their focus token when you attack them, and force your attacker to use theirs, handy if you want to strip it to let your other ships get attacks in.

M9 G8 is an astromech that forces anything you have target locked to reroll one of its attack dice... it also lets you target lock friendly ships to help them out!

Burnout slam is a large ship only card, that is one use and discard and lets you perform the Slam action.  To Slam, you choose and execute a move on the ships dial, which must be the same speed as the move already performed in the round, then you apply a weapons disabled token until the end of the turn.  Handy if you need to get out of a tight spot by burning forward and slamming again. 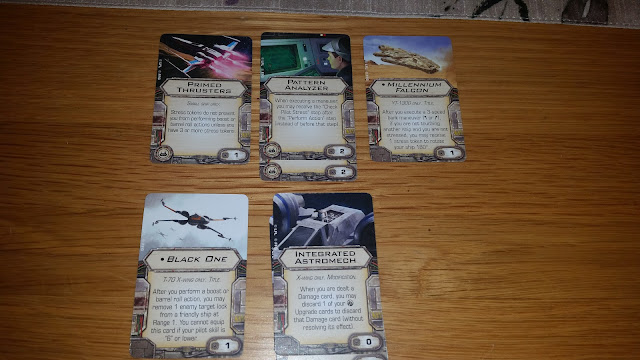 primed thrusters is a small ship only modification that lets you boost and barrel roll whilst stressed until you have 3 stress tokens that is, still this allows a lot of ability to get out of the way when it may not be expected.

The title Millennium Falcon allows you to rotate your ship 180 degrees after a 3 speed bank move at the cost of a stress, great to keep your target in those front arcs for maximum effect.

Black One is a T70 only title, that lets you remove a target lock from a friendly ship at range one after a boost or barrel roll.

integrated Astomech is the last upgrade, and only available to the original Xwing, its really nice to see some love for the original ship in here!  It allows you to discard your astromech to negate a damage card you have been given, handy if tis face up! and an extra hull point as well. 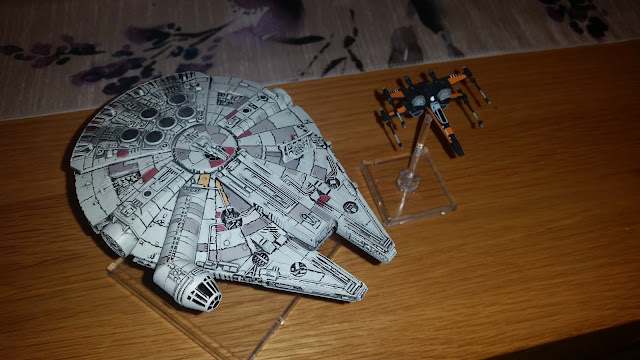 The ships themselves are as you would expect from Fantasy Flight Games, stunning to look at, highly detailed and well painted. 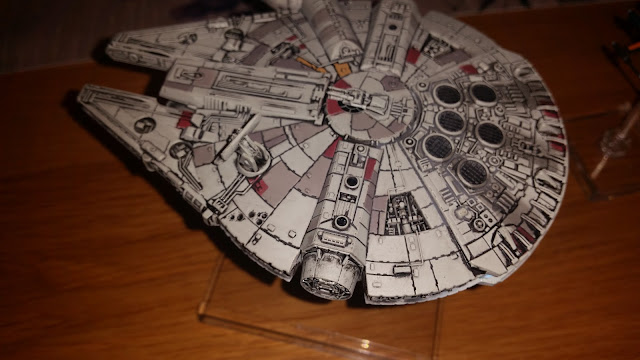 The Falcon does have some differences from the original version, some more damage holes in her showing her age, and of course the square radar dish instead of the round one. 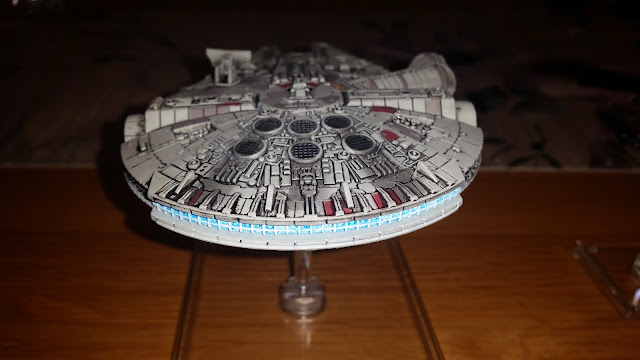 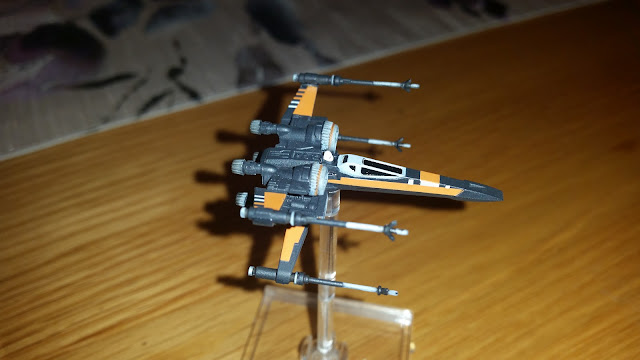 The black one is nicely detailed, though painting black is hard, so it appears a little flat when compared to the glorious falcons paintjob. 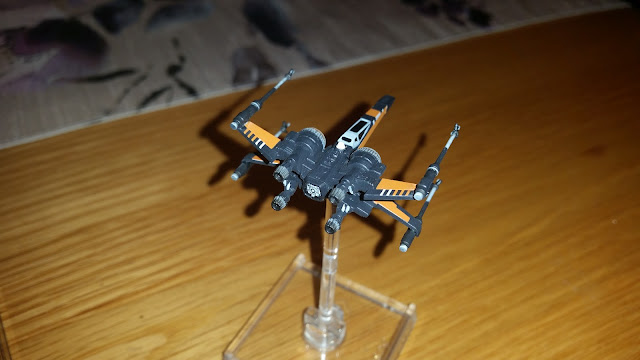 Its still a great ship though, and with all the new pilots, and upgrades in this set, its a must have for any Rebel or resistance player, and it nicely caters for the older Xwing too. well worth grabbing.

With an RRP of £36.99 you get plenty of ships and cards for your money and a good fun mission to, so head on over to your local game store and grab yourself a pack.