Originally designed as an escort for larger Star Destroyers, the smaller Gladiator-class Star Destroyer measures roughly five-hundred meters and proved most effective as a long-range patrol ship deployed to the fringes of the galaxy. There, its brutal armament of turbolasers, concussion missiles, laser cannons, and TIE squadrons allowed it to quickly subjugate any local opposition to the Galactic Empire.

Its time to look at one of the first wave of reinforcements for the Imperial fleet in Armada. so stay with us and we open the box and check it out..... 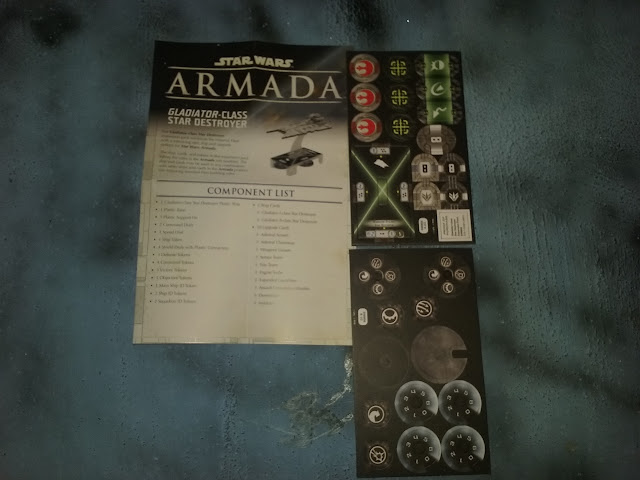 You get a sheet with a component list on it so you can check you have all you need.  As always all the required high quality tokens, bases, pegs and command dial holders you will need. 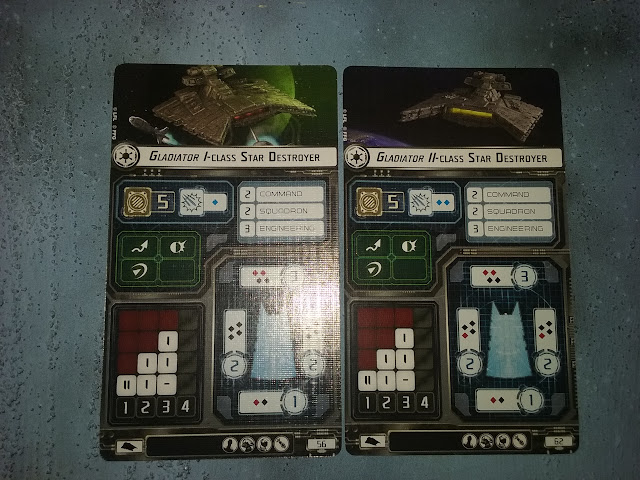 On to the ship herself, as always you get two versions the I and II.  As you can see from the amount of black close range fire she throws out the Gladiator likes to be up close.  And with her being able to go at speed 3 with more manoeuvrability then seen before in the Imperial fleet you should be able to close and unleash those fearsome broadsides.  You do have a couple of red dice in the front arc to pop off shots at long range as you close in.  She has 5 hull, and a brace, redirect and evade defence token. Only 1 anti fighter defence dice, so she made need a fighter escort to keep those pesky Xwings off her.  The class II is more points, adds an extra anti fighter dice, and converts a black to a red dice on the broadside batteries.  Both versions have a command of 2 meaning she is easier to keep control off and requires less planning then the Victory class, and both can activate 2 squadrons, and have 3 for engineering.   Both have the same upgrades available in their bar. 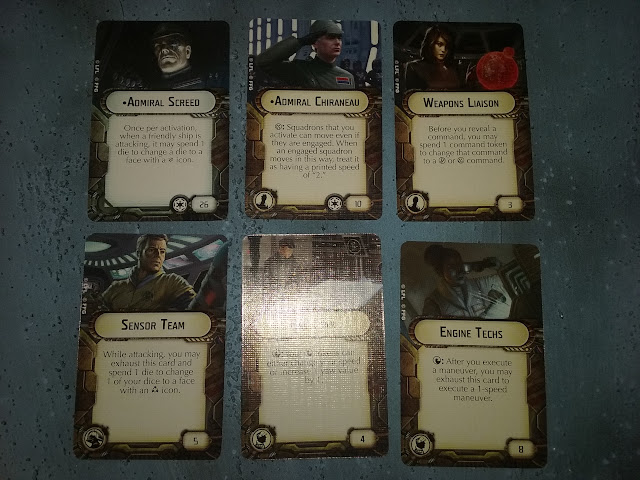 We get a new admiral option for the Imperial forces in the form of Admiral Screed.  HIs ability works once per activation, and lets you spend a die from the ship to turn another dies face to a face with a critical icon.  combined with the black dice that have crit and hits on the same side this can be lethal, and he can be used on all your ships, so you can spend a blank die to trade it for a hit.
In the officer slot we have Admiral Chiraneau he can make your fighters move even they are engaged already, though only at speed 2.  Weapons team allows you to spend a command token to change your dial into a concentrate fire or squadron command.  Sensor team can be exhausted whilst attacking to spend a dice to change one to a target icon so you can then use it to remove a defence token.

Nav Team increases the effects of your navigate tokens making it a very useful upgrade for the slower Imperial ships.  Engine Techs can be exhausted after you use the manoeuvre command to provide an extra speed one manoeuvre, combined with the Gladiators desire to be at point blank range, and her speed, this can really help you be n the right position for the maximum delivery of firepower. 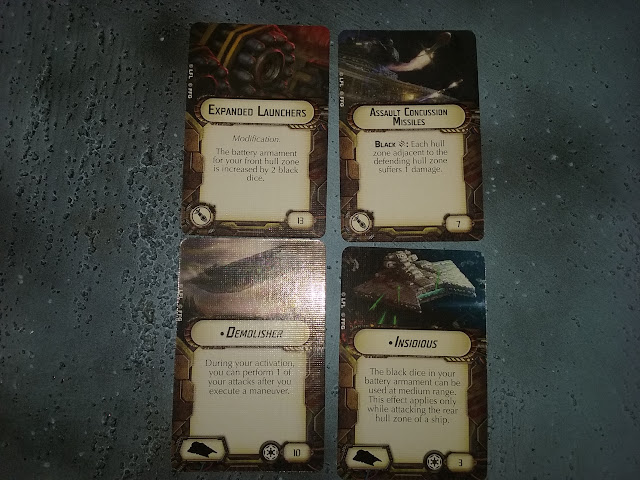 Expanded Launchers increase your front hull zones armament by 2 black dice, making it a truly scary proposition to go nose on with the Gladiator.  Assault Concussion Missiles work when you roll a critical hit on the black dice by inflicting an extra damage on adjacent hull zones.  This is a great card to keep spreading damage as it will limit the effect of an enemy trying to use the redirect defence token.

We have two titles for the Gladiator. the Demolisher, which is my favourite of the two allows you to fire once before you move, and once AFTER you move, which is huge in a game where ships fire first then move.  The other title is the Insidious, and she lets you use your black dice armament at medium range, but only when attacking the rear hull zone of an enemy ship. 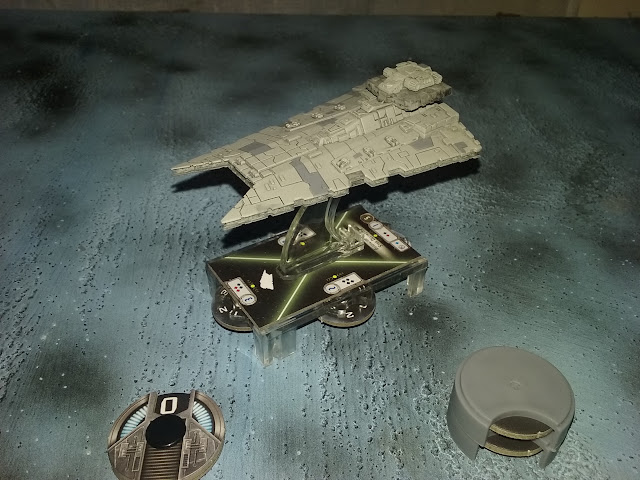 The gladiator is a great looking ship, not as big as the Victory class, but then it is not meant to be, it has the classic Imperial look, but with a flat blunt front that makes it look suitably aggressive. 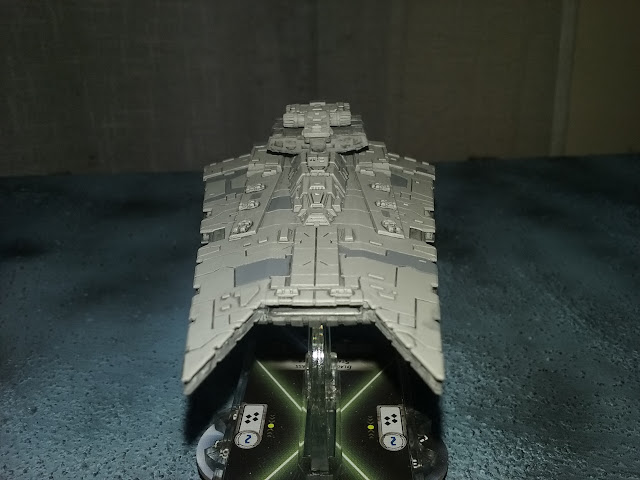 The paint job is as always excellent 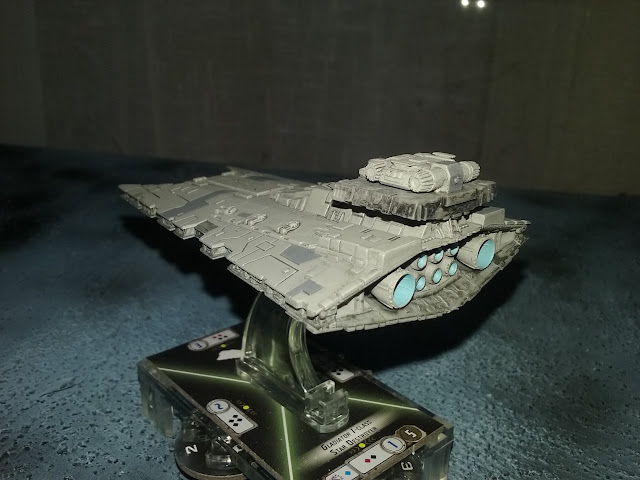 The model still has the engine glow effects painted on which I love.

I can not wait to add this to the fleet and try her on the table, it will be great trying a ship that is faster and more nimble then my beloved Victory class Star Destroyer.