Recently Wixkids have been reissuing some of the older harder to find Attack wign ships which is a good thing, with new and usualluy better paint jobs too, which is an even better thing! so today we get to take a look at what comes in the reprint of one of the classic Klingon D7 battlecruisers.

The IKS Gr'oth was a Klingon D7-class battle cruiser that was in service with the Klingon Imperial Fleet in the mid-23rd century. In 2268, the Gr'oth was under the command of Captain Koloth. The starship's first officer was Korax.
In that year, the Gr'oth entered Federation space and demanded shore leave rights at Deep Space K-7 after completing a six-month mission. It left the station with an engine room full of tribbles. 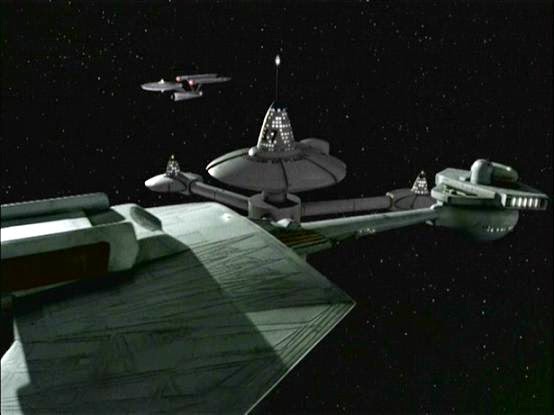 In 2269, the projected stasis field, a weapon capable of disabling the warp drives and completely paralyzing all the vital systems of enemy ships, was installed on the Gr'oth. In that year, the Gr'oth pursued a Federation scoutship piloted by Cyrano Jones, a Federation citizen who was responsible for causing ecological sabotage to a Klingon planet and stealing a Klingon glommer. Koloth attempted to disable the USS Enterprise, under Kirk's command, in order to retrieve Jones and the glommer. 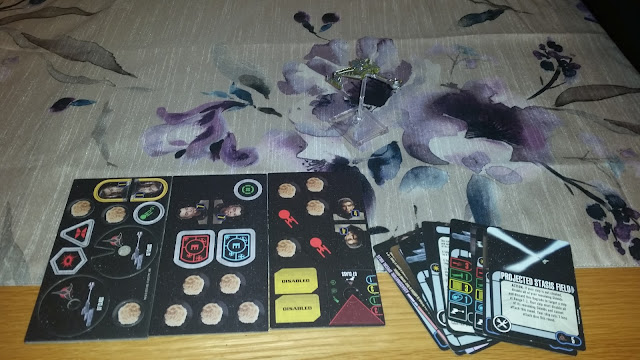 We get the normal slab of tokens etc, with some special ones we will come to later, and all the bits you would expect. 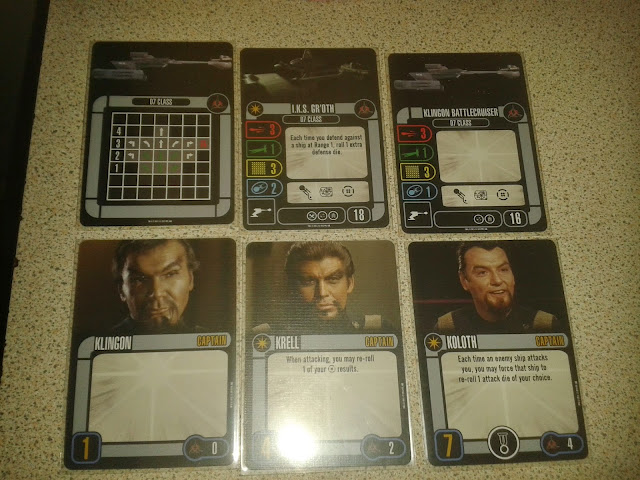 As all Klingon ships its got a good range of manoeuvres including a come about.  The named ship is not the toughest thing out there, but it is cheap an can still throw a respectable amount of dice, though is not very agile, nor can it cloak.  The named ship allows you to roll an extra defence dice at range 1, which helps a bit though.  We get a generic captain as always.  Krell who is captain skill 4 for 2 points and allows you to reroll one of your battle stations.  Koloth is my favourite captain from this pack, at skill 7 he is not bad, has an elite talent slot, and forces an enemy to re-roll one attack dice, hopefully increasing your survivability. 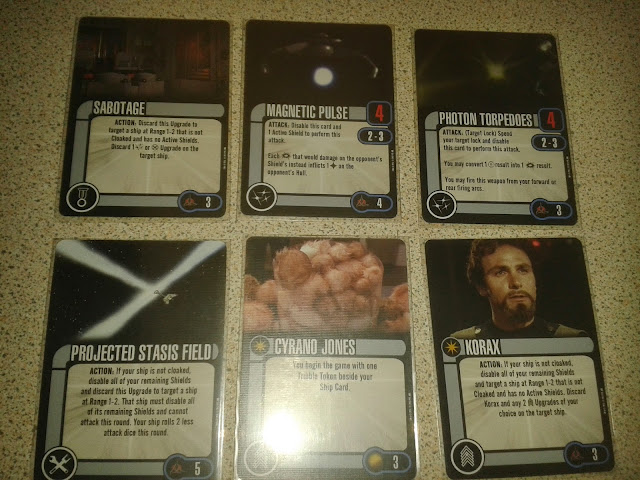 For our elite talent we have sabotage that allows you to discard an enemy weapon or tech.  Magnetic pulse allows some hits to bypass shields.  and of course photon torpedoes which are always useful.  For tech we have Projected stasis field, which allows you to knock down an enemy ships shields, and makes them unable to attack. Yes your own firepower is reduced, but if you can combine other ships then this can be brutal. For crew we have Korac, who you discard to take down 2 enemy crew.  Lastly we have Cyrano jones, who is an independent.  He begins the game with a tribble token besides him.  Tribbles you say? yes... Tribbles!!!! 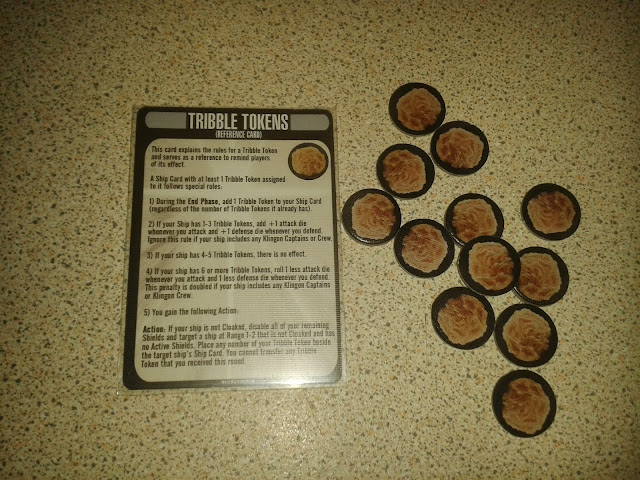 As you can see you get a bucket of tribble tokens in the pack, and they can be great fun! unless your a Klingon as Tribbles are mortal enemies.  Each turn if you have a tribble token on your ship you can an action to beam any number to another ship. One extra token also goes on your ship.  With 1-3 tribbles you get an extra attack and defence die. at 4-5 nothing happens, at 6 or more tribbles I less attack and defence die.  The penalty is doubled if you are a Klingon.  Very fun, very thematic. I like it. 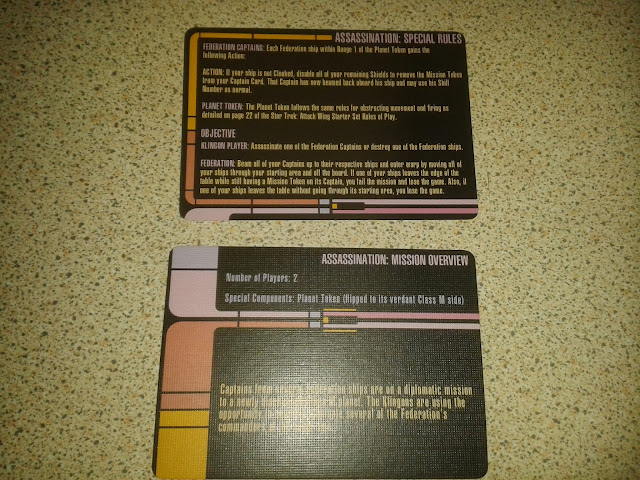 For the mission we get Assaination, a fun thematic 2 player mission.  I always enjoy the missions that come with the ships. 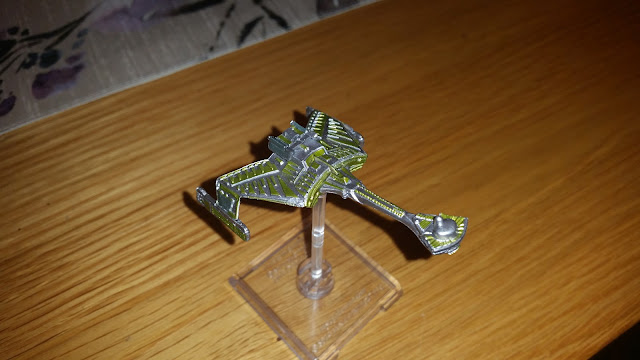 The new paint job is more detailed the old plain green one, and with a wash of ink can come up looking really nice! 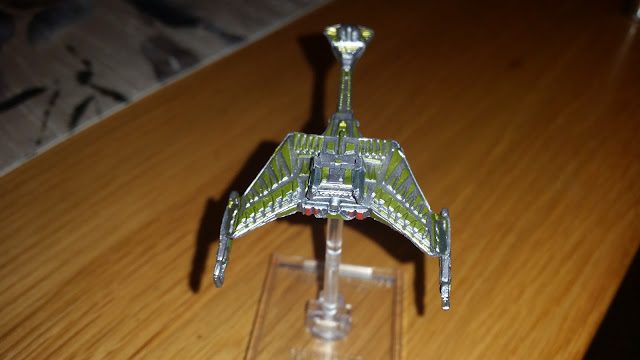 Shes a classic ship, and the tribbles are sure to be a ton of fun, lets hope you have no trouble with them..... ahh dear shame on me for a trekky joke! so give her a try!


With an RRP of £13.99 you get a classic ship that can still pull her weight, and a good fun mission to, so head on over to your local game store and grab yourself a pack.