Bardagi The Claim for Gold from Gamia Games unboxing and review

Viking games seem to be quite the in thing now, I'm seeing all sorts of ones around, but they mainly face on combat, and going Viking was more then that, trade routes, mastering the see, and of course yes subjugating your enemies.

So lets look at Bardagi, a game that looks to put all that into one place..... 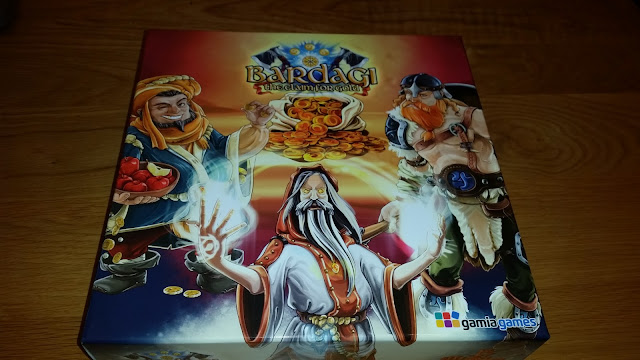 Dissolution has occurred in the Vikings homeland; the country´s resources are depleted and there is turbulence in the society. The High Jarl has invited a group of brave people the opportunity to try their luck in a newly discovered group of islands. The islands are rich of natural resources and your task is to gain control of these resources from the Barbarian tribes currently occupying the area. The takeover is to be done in any way possible; through trade, religious conversion or direct conflict. If you manage to overtake areas peacefully, the Barbarians might join your clan and aid you in your task. There are areas through the island that stand neutral against any invaders and there you can buy or sell resources & learn runes. During the game, your clan tries to build up their region and over shine their rivals with vast riches and wealth. At the game end, the winner is the Clan Leader who collects the most gold!

Bardagi: The Claim for Gold is a card-driven, area management, adventure board game for 2-5 players, played in a number of rounds and each round is divided into 4 turn phases. Each player controls a group of Vikings; a Berserkur (your warrior), a Godi (your priest), a Kaupmadur (your merchant) and Knerrir (your Viking ship). These units are used to claim and overtake areas from the Barbarian tribes currently occupying the land. Players start at their home town and during the game, players overtake the areas surrounding their town to gain resources. Players gain resources each round, according to the areas owned, and with these resources they can reload the units, that are needed to overtake other areas, buy upgrades to improve their buildings, buy runes or trade resources in for gold. The aim of the game is to collect the most glory points within the given rounds to be declare the winner at game end. 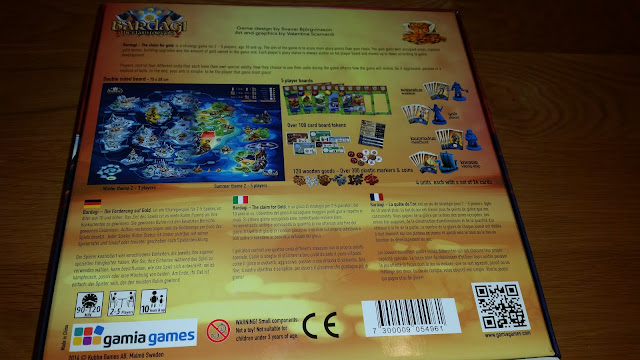 It recommends ages 10 and up, but I think that's a bit too low for the amount of things going on in this game, I would say closer to 14 and up, as its a big game, and not simple at all.  2-5 players, and a game time of 90-120 minutes, it seems the games I have had so far went on a bit longer, but that may have ben due to learning still. 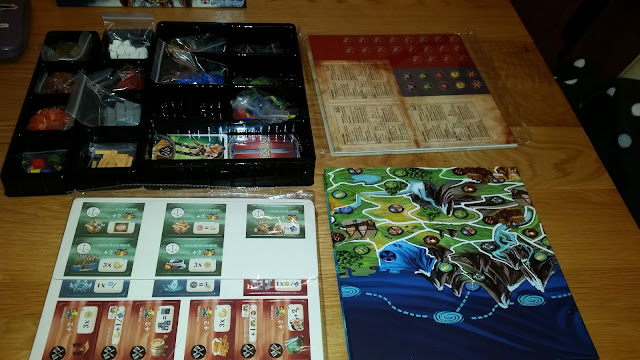 You get a huge amount, with storage trays too, card push outs, a double sided large board, rulebook, wooden tokens, plastic tokens, card rtokens, playing cards, models for your figures, just a massive amount of goodies. 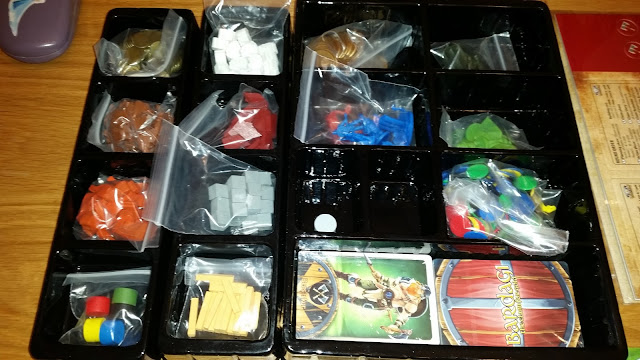 In a really nice touch the trade goods are all int he shape of their things, sheep, stones and so on. 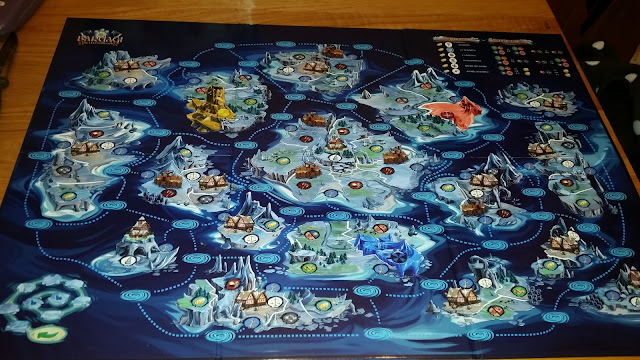 The board is double sided, large and beautiful to look at, here is the harder winter mode with more islands. 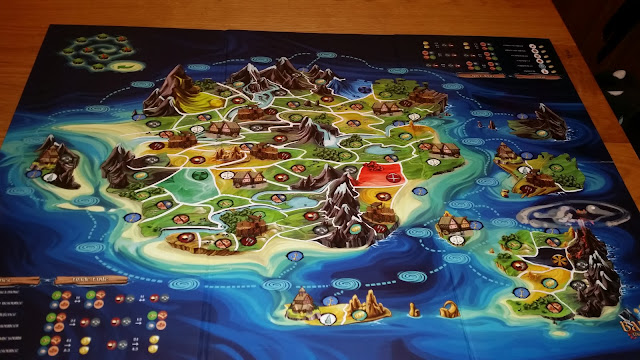 heres is the summer side..... so you already have some nice variety to choose from.  You can see the different resources that spaces generate too... and there is sea travel, good thing you have ships! 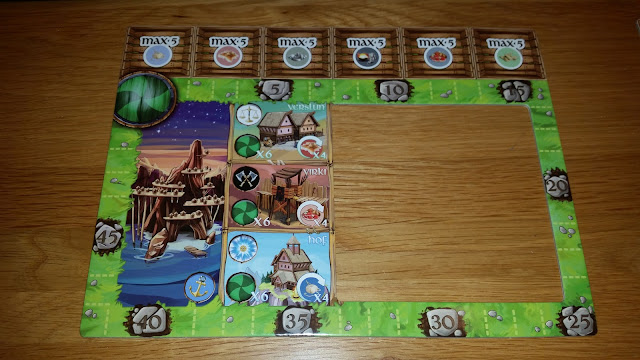 The player boards are large thick card, with slots to put in all the upgrades you can get for your buildings, think of it a bit like a tech tree in civilisation. 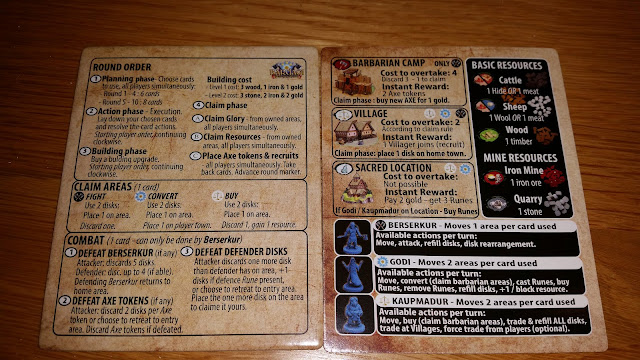 You get a double sided reminder card with round order and little basics to keep you from flicking in the rulebook too much.And a guide for setting up for your first game. 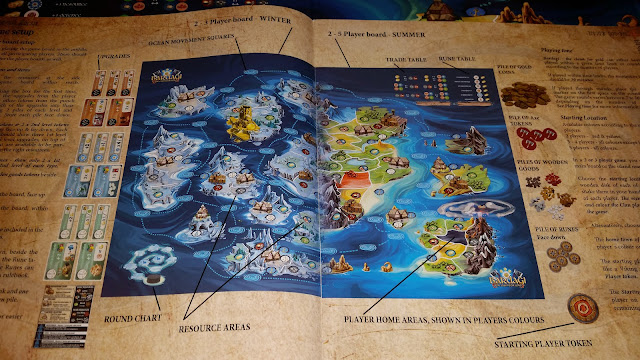 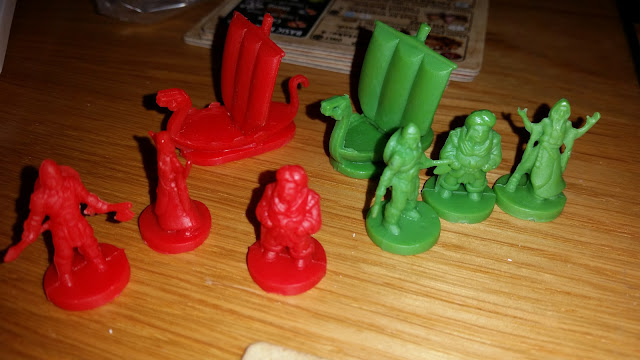 Each player gets a set of the same models, just different colour.  These are perfectly functional, nice little pieces, yes they are not FFG quality, but they work fine and are better then card chits in my opinion. 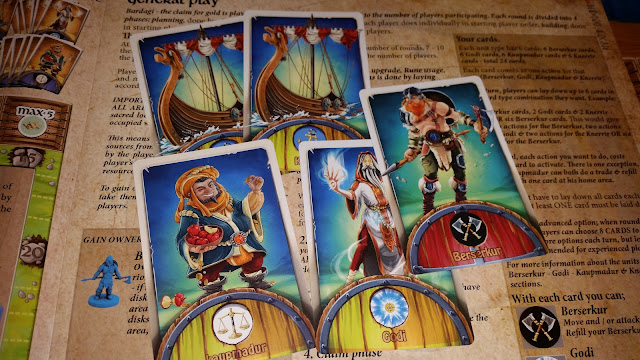 The art on the player cards is lovely, with each of your characters represented, so you can play them out to prepare your actions. 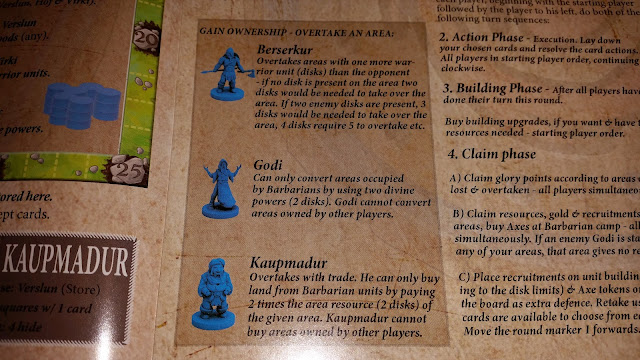 To play, you select your colour, or clan affiliation (in my head) and set out on a journey for mad  conquest. there are other more subtle ways to take land rather that just conquering areas with your Berserker, you can also convert barbarians with the magic of your Godi, or bribe them with the gold from your Kaupmadur trader. Players also have a Knerrir unit (boat) that allows for movement over the treacherous seas, which on the harder winter map will prove a whole lot more useful to you.

Each player begins home base with little discs that represent many different game mechanics ( strength of troops, gold to trade, magic power, area domination). You use cards to play out turns, with each one activating one of their four units. Each unit has a different method of taking over territory. 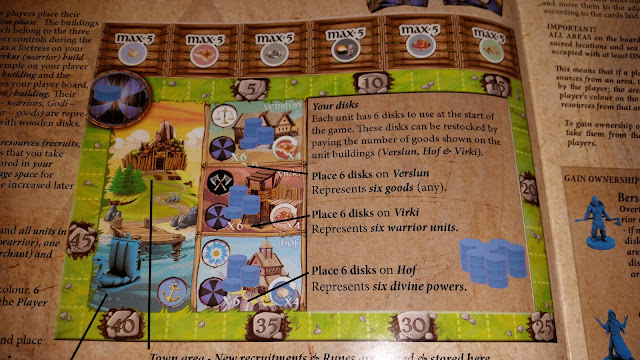 Players will gain resources and glory (which are victory points) from each area they control at the end of the round, which are then used as  resources to construct building upgrades for your units. Upgrades grant glory and an increase the discs they can hold, can strengthen units, or give extra gold or glory for controlling specific resources. 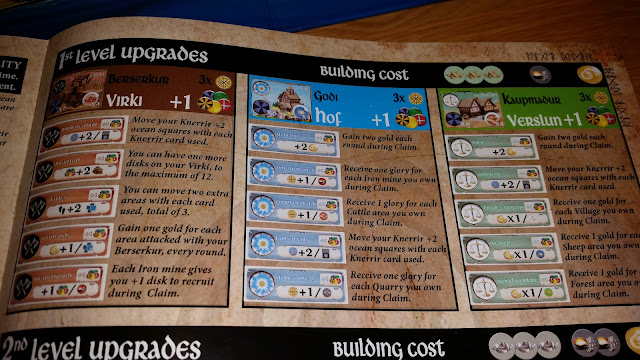 The game ends either on a decided real-time limit, or once a number of rounds have been played.  You work out your points from your gold, resource trade-ins, and you receive extra points for controlling most land or amassing most gold. The player with the most glory at the end of the game is the winner.  Simple right? With so many things you can do in this game, not so simple!


Bardagi is a bit of a mix in theme between a civ-building game with your tech upgrades you can get, and a war game with area control, with a mix of random trade goods in there.  with all the different resources available around the lands, it really does give you a reason to go a Viking and explore.


Each turn bears so many things to think about. Where do you leave your Godi for extra resource gain? Why did you need your Kaupmadur to end 2 spaces from that village instead of 3? Did you need to refill your Berserker on the last action, or was it fine to use his last two discs on the ore deposit? and this only continues as your empire spread grows, leaving you with hard choices, and not enough actions to complete them all, but then that's part of the challenge and appeal.

I have to admit, it took a good few reads of the rulebook to get this beast figured out, its a big and complex game, and makes Arkham horror look simple..... the rulebook could do with some clearing up, but with enough reads you will get the hang of it, and when you do...... a whole world of adventure will await you planning your own little empire.  Since there are so many ways to play and win, it means the levels of strategy can be so wildly different, giving you lots of replay value, and with up to 5 players everyone can be playing so differently you will have to be able to think about how to counter all eventualities 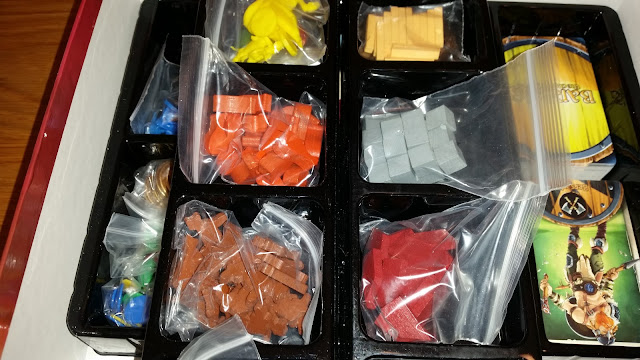 The components of the game do get special mention, they are lovely..... and the box control is very good, though it does mean its not a quick game to set up, or put away either for that matter.

But is it a good game to play? well.... its not easy to learn, in fact it left Olivia scratching her head for most of it, and me for a lot of it, for our first game, so its certainly complex, but do not give up on it, under those rules, when you have them understood is a very solid game, with good replay value and lovely art and components..... you just need to put the time into getting it running right, but it will reward you!

To join the adventure with an RRP of £52.99 head on over to your Local Game store and grab a copy.

If you liked this you may like Agricola or Catan