Welcome to another Ship build.  The Ferengi D’Kora class Kreechta is the star of the show today.  As always I shall only use the cards in the pack, and no more then 50pts in total.  Then look at the role the ship can play in a fleet, which is a bit more difficult for the Ferengi, with such few ships.
So what's in this build? 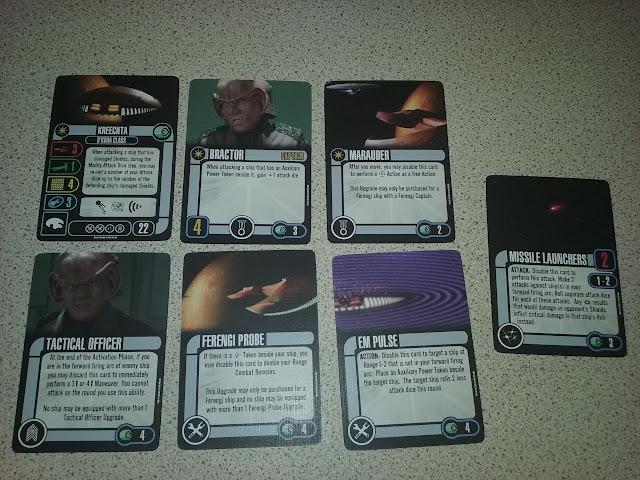 We Start with the named ship the Kreechta, she allows you to get an almost inbuilt free target lock when attacking a ship with damaged shields.

gives you an extra attack dice when attacking a ship with auxiliary token on it which links nicely with the EM pulse tech on the ship.  for an action you disable it to add an auxiliary power on to another ship.  It is situational but as a passive ability on Bractor its not too bad.  Maruader as an elite talent allows you to disable to add a battlestations result, which on a ship that does not natively have it is certainly useful.

Ferengi probe is our second bit of tech on the ship, it allows you to double your range bonus if you have a scan by your ship, so you can fly in to range one, double your bonus by having a scan, so your enemy is rolling one less defence dice anyway and you are rolling 2 more!.  If they have an aux power token you are potentially doing even more damage.

Tactical officer is there to help you get out of trouble when you need to, no point being parked next to a dreadnaught that is about to nuke you, there is no profit in that.

The last card in the build is the Ferengi missile launchers, only 2 attack dice, but you can fire twice, and potentially avoid your enemies shields and hit the hull directly with a critical hit.  Well worth the try.


The ship won't survive the best in the middle of a battle line, but then that's not how you should play your Ferengi.  You need to strike when the moment is most profitable, do not be afraid to manoeuvre, waiting the right moment to get the combo off to inflict massive damage, move out prepare and go back in again.

a fun ship to try though