Hit Z Road...... a zombie game, a zombie survival game with bidding mechanics and dice rolling? sounds intriguing, sounds different as well.  I know the market is flooded by zombie games, but this is something i have not come across before, and frankly i was sold on the box art.... 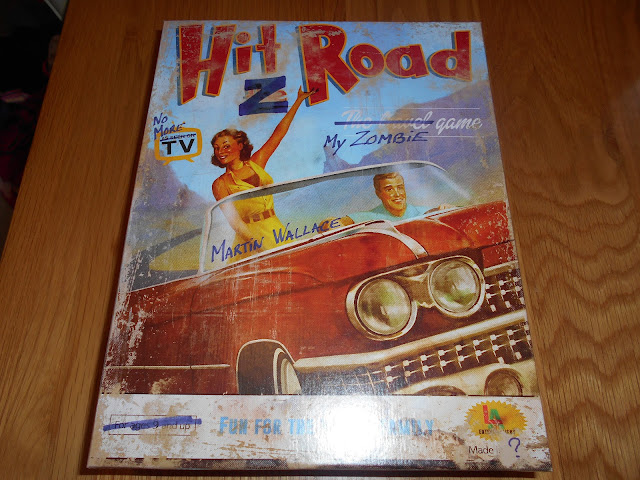 Its a thing of beauty, with a 50s/60s look that i just love! combined wit the weathered style of the box, and hand drawn scribble its not like the normal boardgame you see, and that for me is one of its charms.

In the fast-paced and morbidly kitschy game Hit Z Road, you and your fellow players embark on a road trip going south from Chicago along America's famous Route 66 — now infested by zombies. As you travel though a deck of adventure cards rife with dangers, you battle zombie hordes, drive abandoned school buses, scavenge for gas and bullets, and explore a darkened, tainted American countryside full of shambling undead, haunted carnivals, and plumes of toxic gas. Your goal is to stay alive until you reach the safe, sandy beaches of the California coast.
Three different stages of adventure cards create an experience of increasing difficulty and ensure that each playthrough is unique. Each round begins with an auction that determines both player order and which cards you will encounter. Since the resources used for bidding are the same as those used to battle the oncoming zombie hordes, your survival depends as much on your resource management as it does upon winning those bidding wars. The player who either accumulates the most points or survives the longest wins.

Zombies of all types await, with cannibals, anti-personnel mines and radioactive wastes also being among the hazards awaiting the players. Who will survive the zombie onslaught? 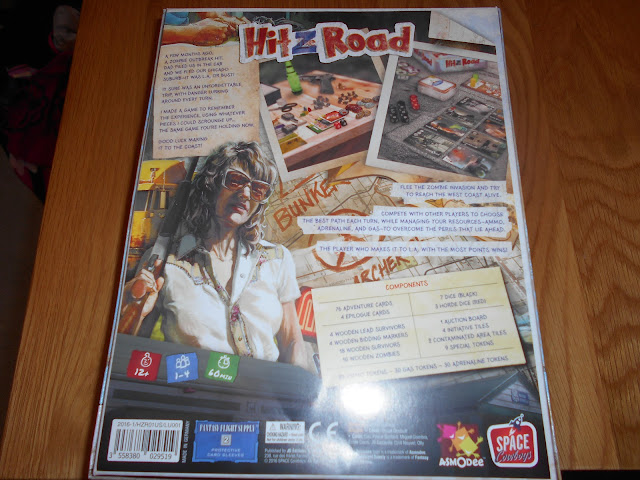 The back of the box has some nice art, and gives you a good overview of the game, but you may notice, it doesnt really fit the theme of the front of the box, again there is a reason, as once you open the cellophane wrap from it, you see its just a s sheet and under it is....... 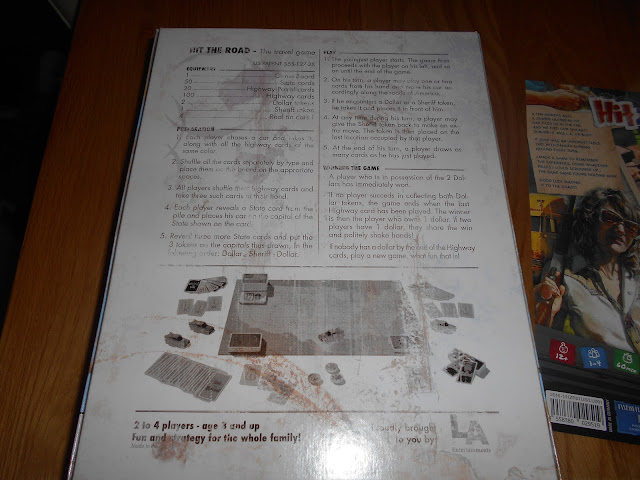 What looks like a battered and weathered box from some 50s/60s board game that has rules that dont relate to the game you just read about.  Its all part of the excellent graphic design and theme of this game, don't worry, ti will all start to make sense when we pop open the box........... 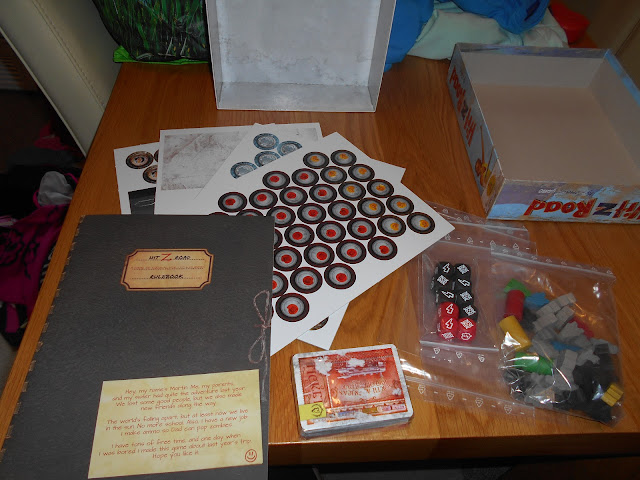 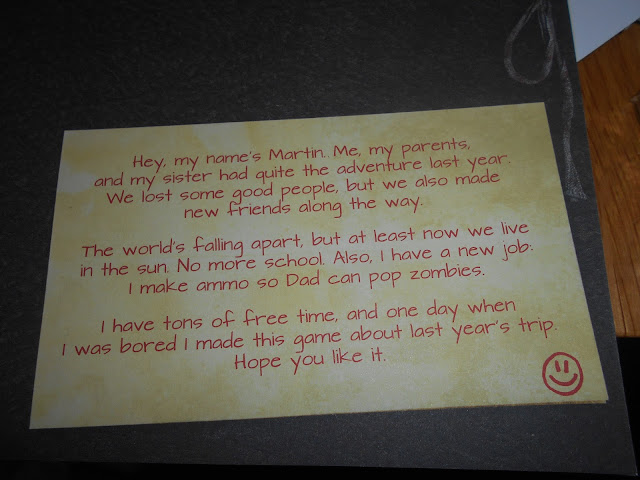 Reading this helps set the games theme, and decribes the art style, so its someones game they made along the way, and it shows with lovely art touches, such as the reused box, and the manual itself looking like it was put together with a mix of background pages 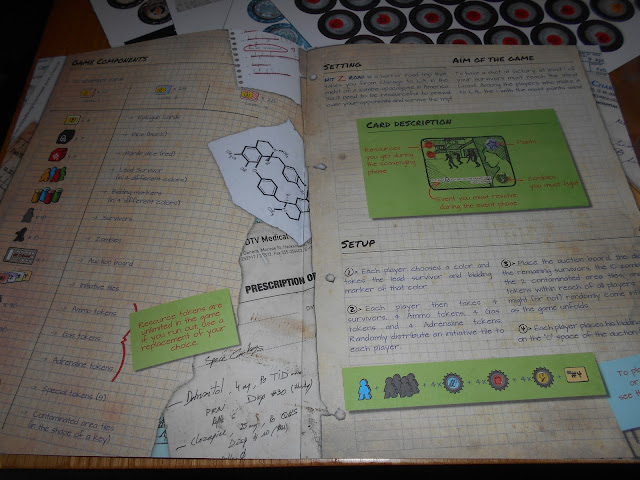 The rules though, are very easy to follow, and very clear, and i like the look of it, in fact i spent just as much time looking at whatit was made up of, and reading the bits of information not to do with the rules, as i did on the rules, as they are nice and simple and efficient. 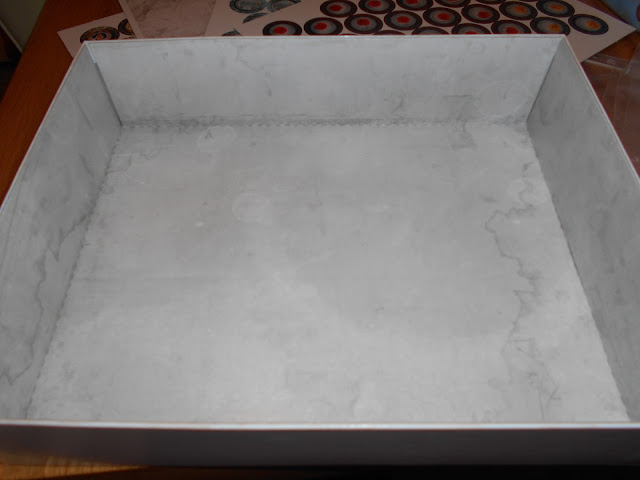 even the inside of the box, a piece usually neglected has a weathered look, yes i know it does not effect how the game plays, but i really like the effort they have put into this. 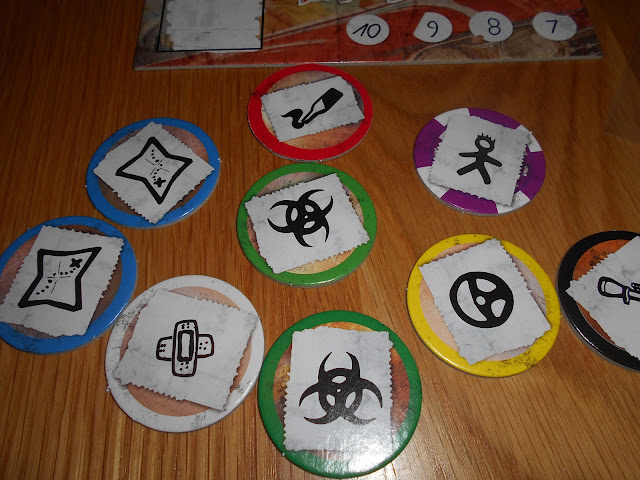 So once you have punched out the tokens, which can then be popped into the included baggies (yes empty baggies for tokens, this makes me VERY happy)  These are special effect tokens, that are taken from cards events, and used on certain cards, its all very clear on the cards when and how they ar used.  look at the design though, like they have put on other counters, and poker chips, really great loving the look so much. 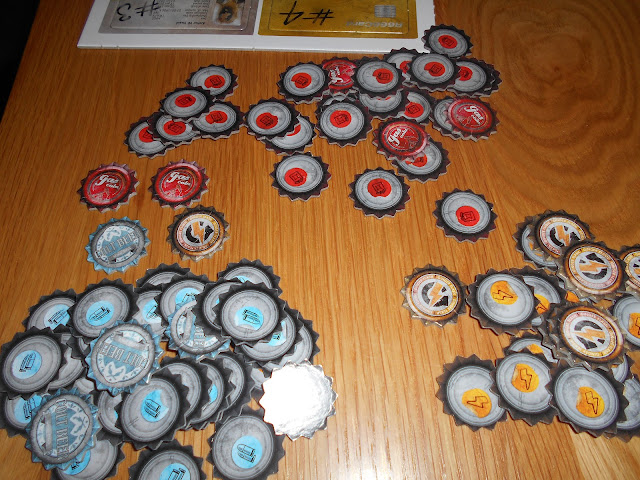 There are tokens for fuel, ammunition, and adrenaline.  These are printed to look like bottlecaps..... bottlecaps!! like in Fallout, i LOVE them, the art is great 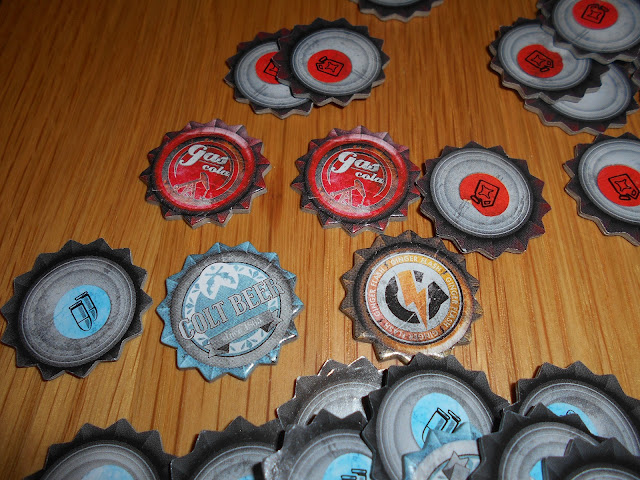 Bottlecaps with little mini "stickers" placed in them. 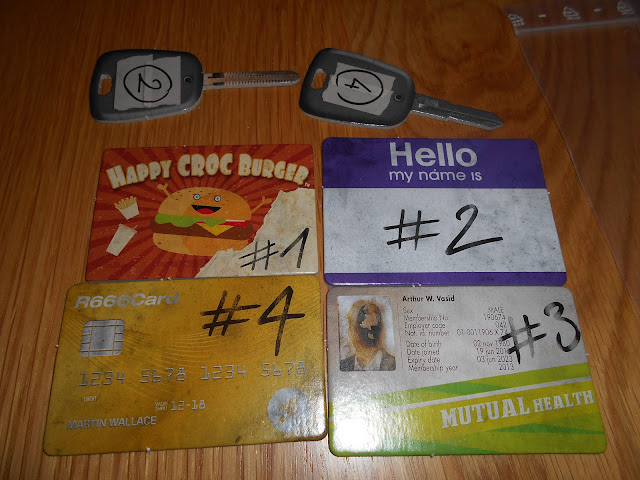 The player markers keep the theme up, with name badges, and credit cards being used. 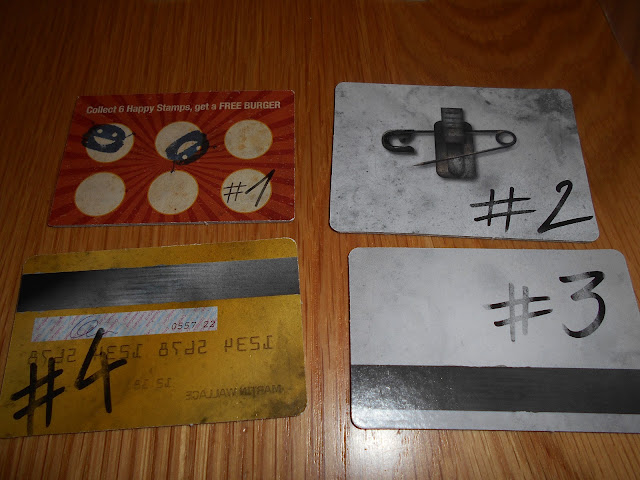 Even the backs of them have matching art, which some may say is overkill, but it really helps build the theme of the world being in the grip of an apocalypse. 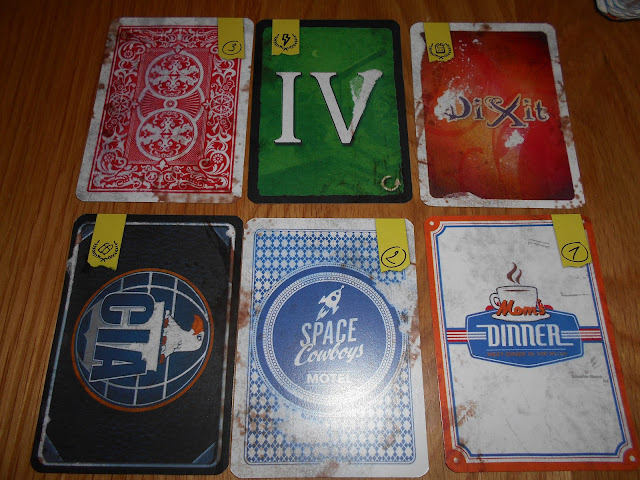 The back of the cards continue to follow the theme, looking like bits from scavenged decks of normal cards, or other games like Dixit, and CIA.  Others just have a classic 50s/60s look on them. 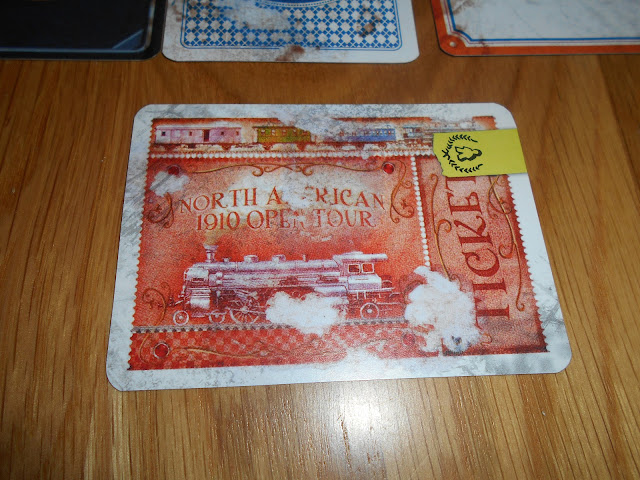 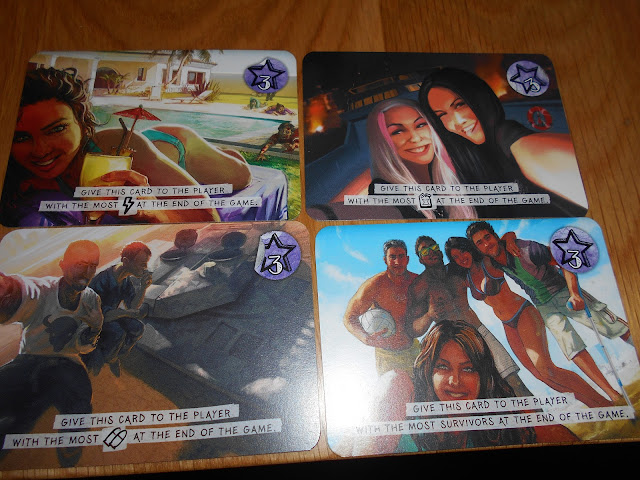 Up until now the look of the parts and theme has had a very retro feel to them, but now we look at some of the cards, and get a modern vide.  The cards above are presented at the end of the game and provide extra victory points (the purple star in the top right)  They are taken to look like "selfies" on a camera phone, so you could imagine that the maker has taken these and stuck them on the cards. These are the main 3 advneutre decks, they go up in difficulty, from 1-3, and are nicely marked nt he back so you can easily tell.  You start to build your routes with these which we come to later.  They coud give you extra tokens for your resources, or victory points, or a mix, or you could have to fight zombies (the green hand icon) or worse, a Zombie horde (the red hand icon) 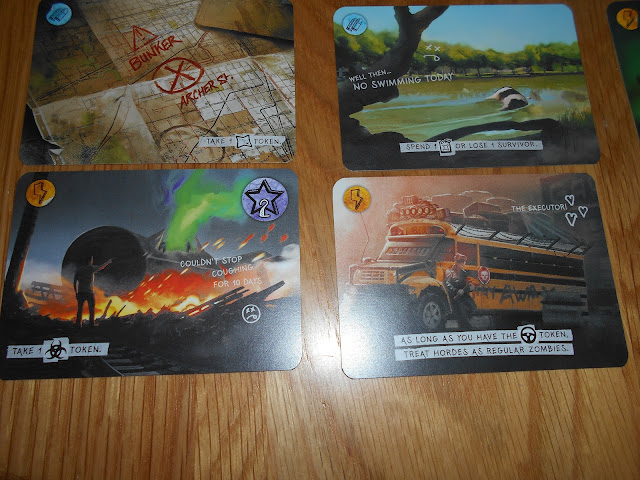 Again the art doesn't match the retro look of the rest of the game, but it does fit, anda gain could be seen as photos printed and stuck on the cards if you want to keep the world in its theme. 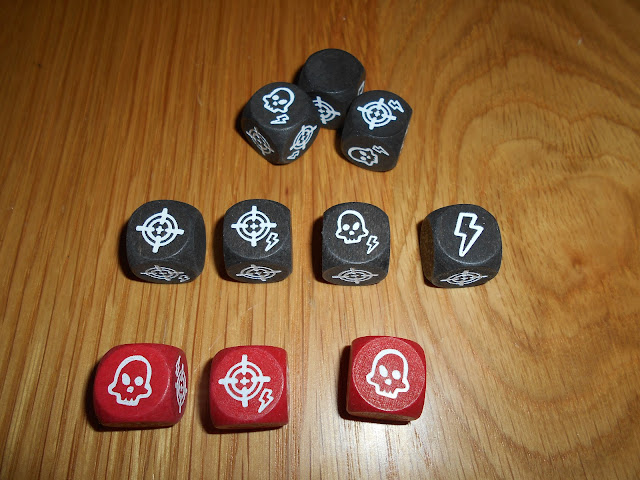 Next in the box the dice, they have different symbols to show you the varying effects, such as the target for a ranged kill on a zombie, or the skull for a death on your team, though the little lightning bolts mean you can spend adrenaline to save them, or increase damage.  The dice are wooden, and really really light, i mean unusually so, but i quite like it, means they wont be crushing what ever they hit. 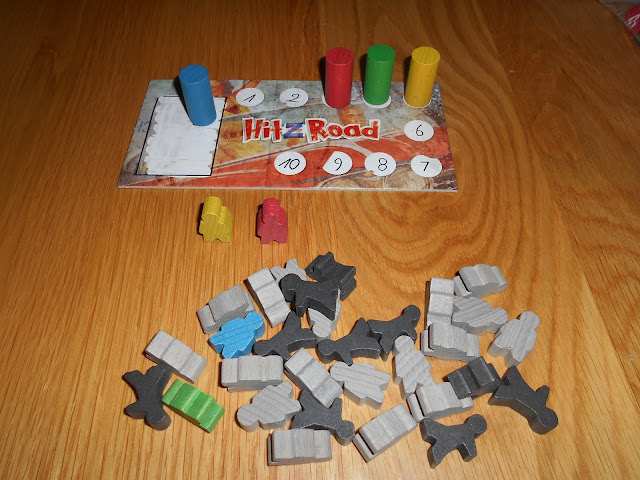 There are plenty more wooden components, those these feel a bit more hefty then the dice. 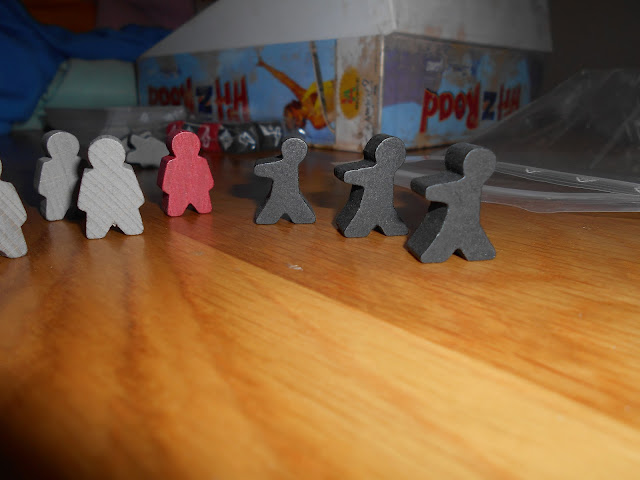 You get coloured player markers for bidding, and for yourself, and four for each player of the team markers which represent you and your band of survivors, who can get eaten by zombies on your adventure.  I really like the zombie counters, wooden, and done in a lurching arms out classic style zombie pose.  Very cool. 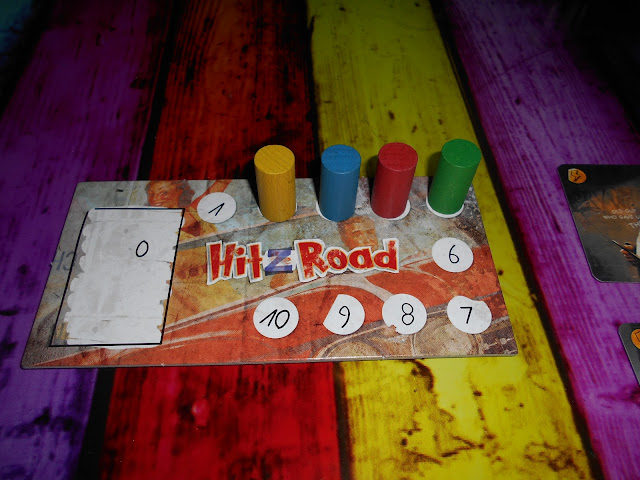 so its pretty simple in setup and play, you build up the Adventure deck, with level 1, 2, and 3 cards, then draw them out into 4 routes.  Then you bid.  The players start with 8 resources each, and can bid those resources to get first pick of the routes.  You move your bidding tokens to the position for the number you will then all the players can bid, or pass.  Here the green player (me as Green is my favorite colour so any game you pick, im always green) has spent out 5 resources, which can be any mix, but gets to pick first for the route. 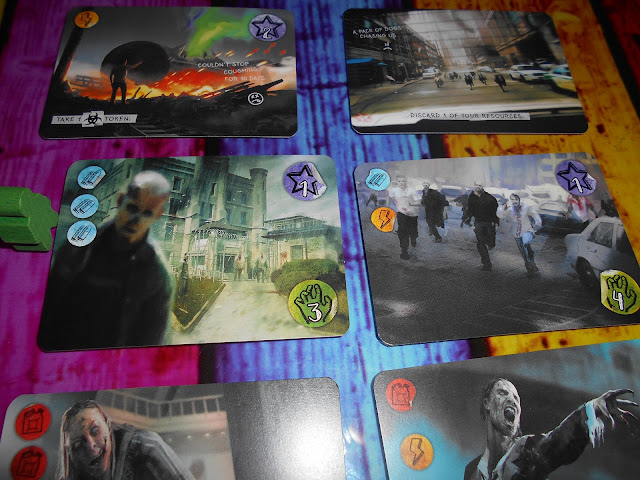 I have decided to go for this route, some good resources, and more importantly some victory points. Yes i will have to fight, 3 and then 4 zombies, but its fine, i have plenty of resources if i need them right? yeah... didnt think i had just spent 5.

So me and my four fellow survivors amble in..... we can spend bullets to indulge in some ranged comabt before the zombies meet us, so yeah sure, i spend two bullet tokens, each token spent lets me roll 2 die. 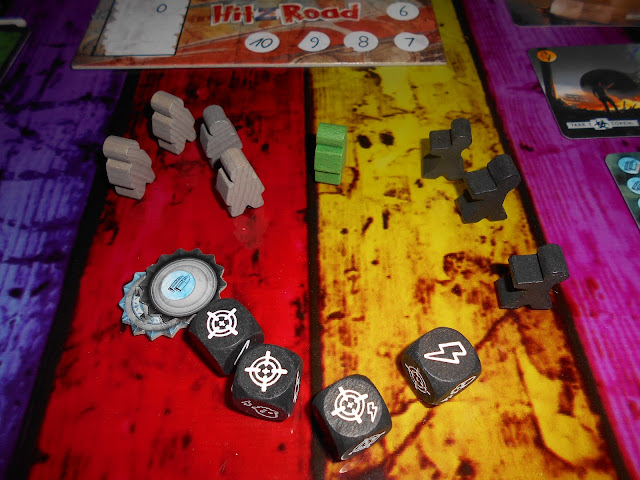 Blammo! 3 dead zombies, this is easy, lets grab the resources, and head onto the next card feeling quite sure of my groups ability to survive this. 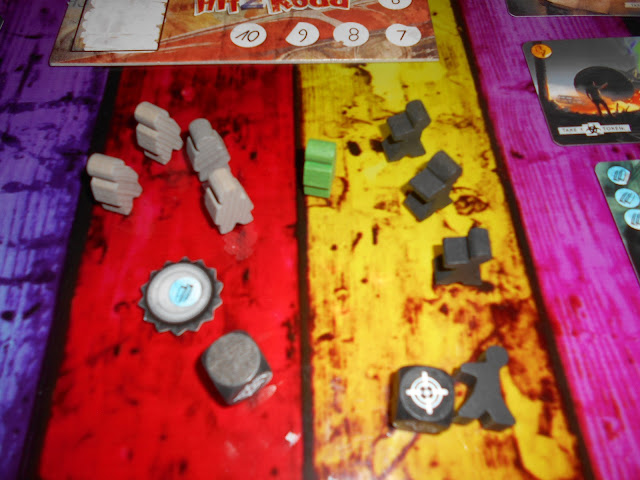 gathered up the tokens from the first card, and thought, i will only use one bullet token, i want to save them for bidding, did frag a zombie, but then came the close combat phase........ 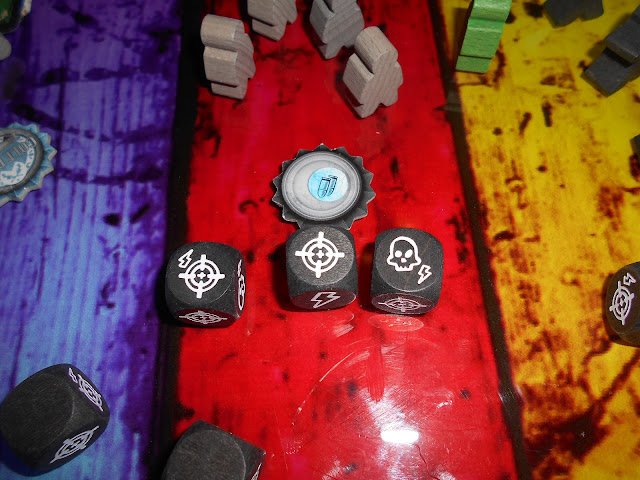 When the optional ranged combat is over, it goes into fisticuffs, rolling OK i killed two zombies, but i got a skull meaning one of my party would die, as i had stupidly spent all my adrenaline tokens i lost a survivor.  Then the fight continued with another round of rolling to end the combat, as it carries on until all zombies are dead, or all your survivor team are dead.


The game then goes to drawing new routes, and bidding and continues.  You can use petrol if you want to skip a card, though using up those resources does hurt, and things get harder as you work through the stage 1, and onto the stage 2 cards, then the 3 cards and so on.  Picking up tokens, bidding, trying to survive.  You can start to lose group members, which of course reduces your combat effectiveness, as in close combat you get a die per person, so the more dead the less well you fight.  Occasionally you will collect some of the larger tokens, which may make you wonder what they are for, but when you see a route that lets you use them it will all become apparent, which is an idea i really like, as it makes you think, should i take the route to gain the token? could come in handy.....

Bidding, and dice rolls, and resource management are the main gameplay core mechanics here, but its easy to get to drawn into the theme, bands  of survivors making their way across country, going their different routes to maximize resources, but each one really wants the best for themselves.  Its simple to teach, easy to play and full of theme, it works best we found with 3 or-4 players as with 2 players the bidding becoems a bit more redundant, though the less players there are the more routes get closed off.

It can be played solo, yes solo.  You know i always like a game with that option, and this provides a good experience, as it has limited routes, and one of them face down, so you are never sure what it will be, but you do get bonus resources for going that way.  Its good to try and set yourself a high score and then try and beat it, as it can be played very fast solo.

Its a fun game and looks great, easy enough for everyone to learn as there is no text on the cards so you can teach the younglings, if they are of a mind for such zombie themes.

I like this, its easy to play for me, i do not have to read much, and i like to roll dice and kill zombies, i do not like it when zombies eat my people, they all have names and it is sad.  I think all ages will like this, i was not scared by it


With an RRP of £30.99 you can pick one up from your local game store, or ask them to order a copy in for you.  Then hit the highway and see how long you can survive for!