Time once more to dive into the world of Star Wars Armada, with the release of the Rebel Transports flotilla for Armada.  Flotillas are a new form of ship, that come in pairs to sit on a single base.  Whilst they will not possess the same kind of firepower as main fleet ships, but will benefit you more in a support or escort role.

The first set we will look at is the Rebel Transports. 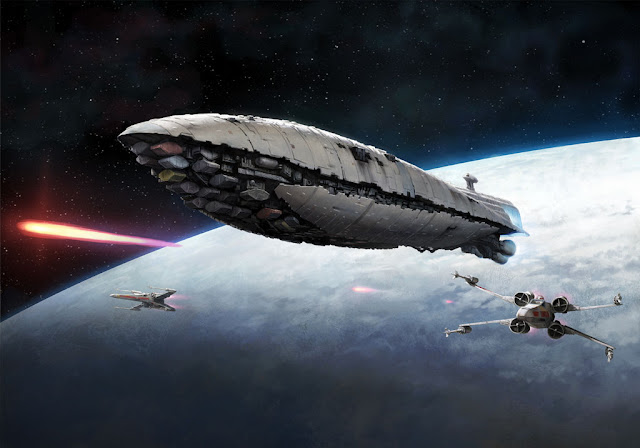 I had a massive toy of this when i was a kid, it was an awesome figure carry case, so it has a soft spot in my heart.

The Rebel Transports Expansion Pack introduces a flotilla of GR-75 medium transports to your games of Star Wars Armada. In addition to its flotilla, which you can field as either a pair of GR-75 Combat Retrofits or GR-75 Medium Transports, the Rebel Transports Expansion Pack introduces eight upgrades, four of which feature the utilitarian Fleet Support icon. Relay commands to your larger ships with a Comms Net, or trail behind your largest ships with Repair Crews to keep them in the fight a bit longer. Clever use of the support your fleet gains from its Rebel transports can easily make the difference between victory or defeat. 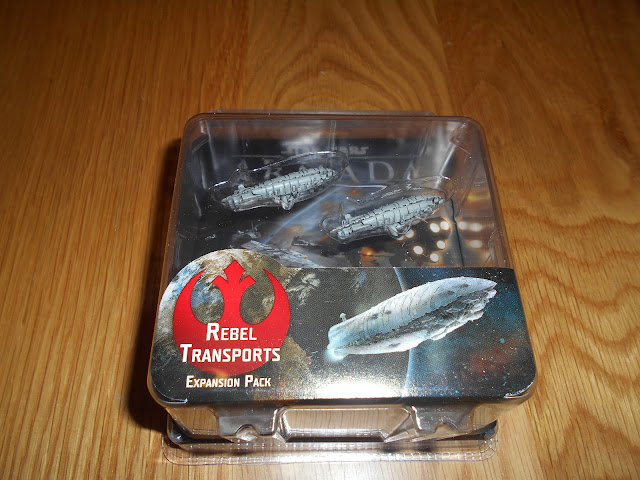 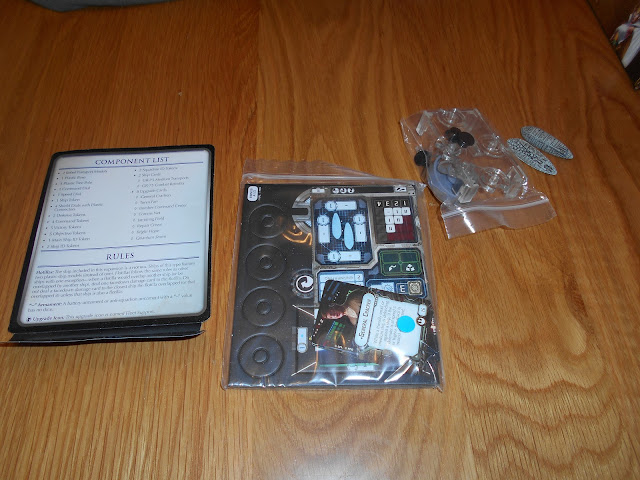 inside you get a baggie of tokens and cards, and one for the base and plastic bits.  a component sheet, and the tiny little ships themselves. 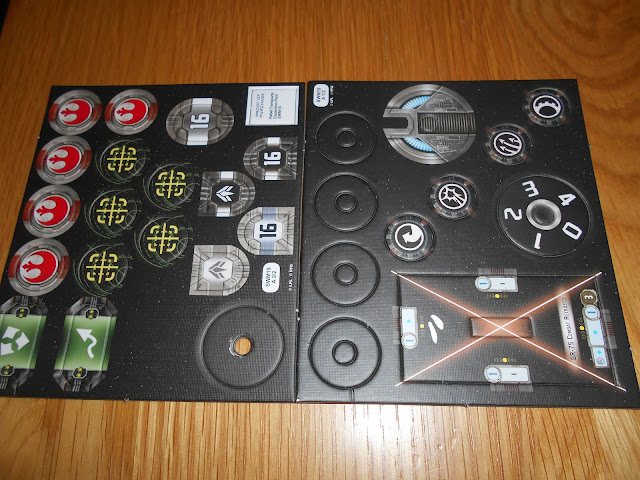 As with all FFG games, plenty of nice quality tokens.  You can see she certainly does not kick out much in the ay of firepower, with a single medium range die on front and rear, and only one shield as well, so dont go steaming her into a Star Destroyer. 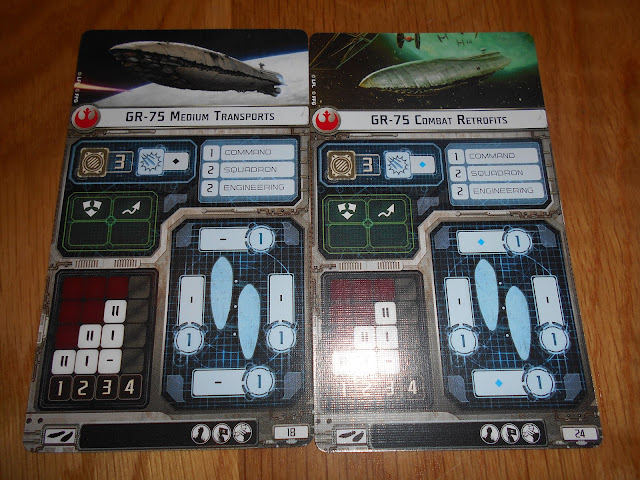 You can see with 3 hull and a single shield all around she wont take much punishment, but then, shes not designed to.  She is fast, and very nimble so can get around where needed.  You get two versions, the medium transports, and the Combat retrofits which add a blue dice attack to the front and rear.  The ships main use though comes in her upgrades, and building them to support your fleet, and at only 18 points she wont break the bank. 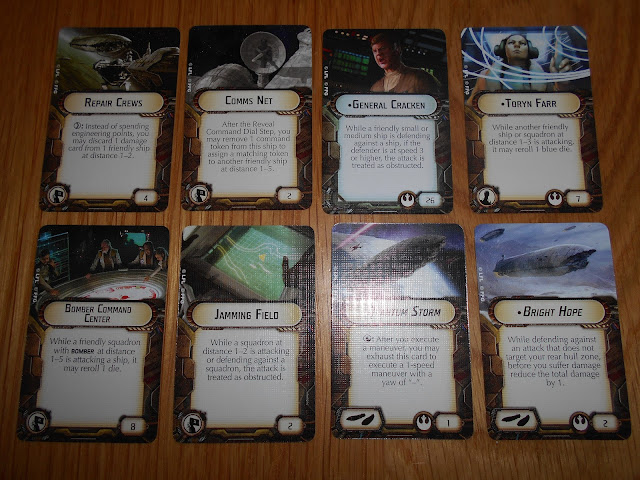 Repair Crews lets you just discard a damage point from a friendly sip in range 1-3, making them good to help keep ships in the fight.

Comms Net lets you take a token from your ship to assign it to a friendly ship in distance 1-5, very useful as you can store plenty up and then dish them out when needed.

General Cracken helps small and medium ships when they are attacked by making them count as obscured, its a nice option to try and suits the them of a small strike force.

Bomber Command center lets a friendly bomber at distance 1-5 reroll a dice.  This is excellent with the Xwings all having the bomber trait, so can really help to maximise damage potential.

Then we have a couple of nice cheap named titles, one lets you do an extra move at the end of yours, and one can drop the incoming damage down, so you have some nice choices. 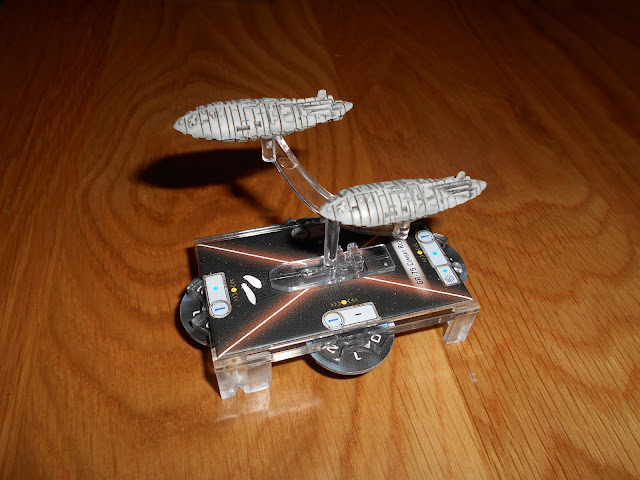 The ships are tiny, but nicely detailed 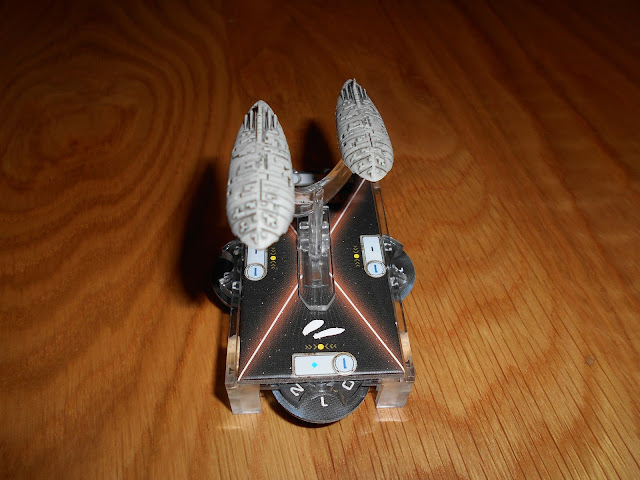 Its a pack that again provides so many differnt options to try out, im looking forward to trying them myselfs, and working on a fighter support version to help my Xwings strike harder. 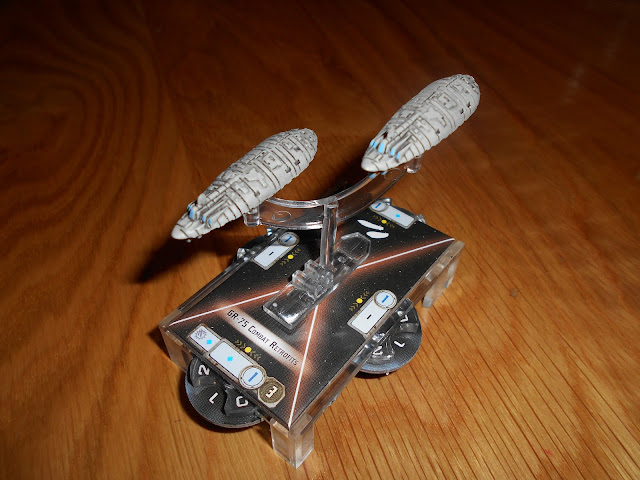 Coming in with an RRP of £18.99 this will add a whole new way to think about your battles, and supporting your fleet.