Time to look at another "classic" of table top gaming, the new 2016 edition of Agricola.  A game about farming.... yes farming.  May sound odd i know, but stick with us.... its a VERY deep game, and is considered with games like Catan to be genre classics and responsible for the resurgence in boardgames. 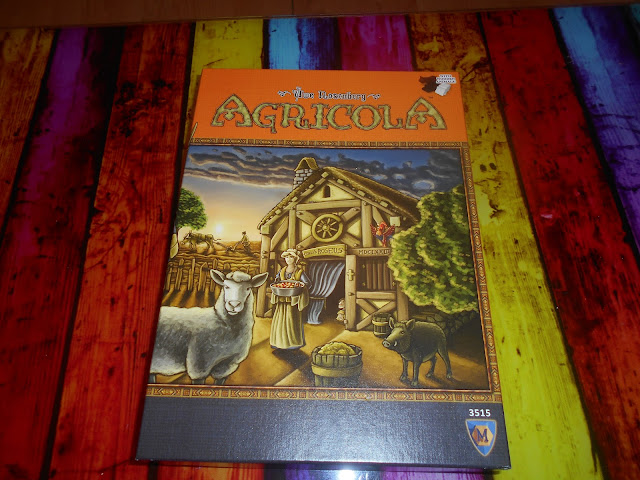 The artwork on it is different to more modern games, its very..... subtle, though i kind of like it, it pretty much shows you what the game is about in a single picture, and this style of artwork is carried on through the game.

The 17th Century Was Not an Easy Time to be a Farmer. A game for 1-4 players ages 12 and up; play time is 30 minutes per player. Amazing replay value. The Agricola base game is a revised edition of Uwe Rosenberg’s celebrated classic. The game is designed for 1-4 players, features improved all-wood components and a card selection from the base game as well as its expansions, revised and updated for this edition. Players begin the game with two family members and can grow their families over the course of the game. This allows them more actions but remember you have to grow more food to feed your family as it grows! Feeding your family is a special kind of challenge and players will plant grain and vegetables while supplementing their food supply with sheep, wild boar and cattle. Guide your family to wealth, health and prosperity and you will win the game. 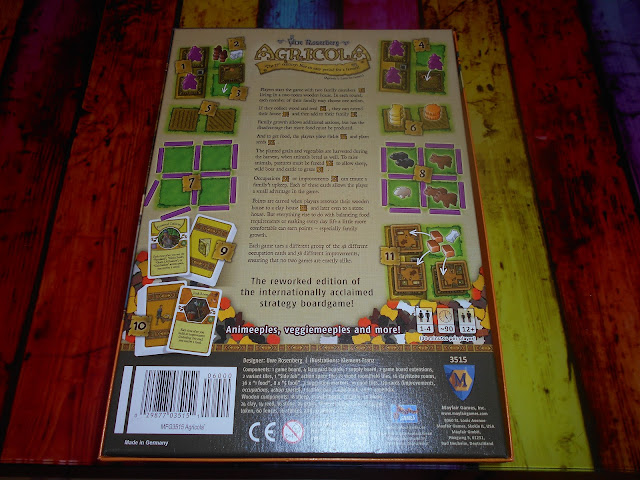 its a game for 1-4 players, excellent to see a solo mode, really good for learning the game to teach.  90 min time, but that does depend on player number, and how familiar they are with gaming, and this is a pretty hefty beast to tally up the points at the end of the game.  Ages 12 and up is relative to how well your children can read, and plan, Olivia found this one a bit tough at age7.  Mind you... i did too at points!!

so lets open this box and see what we get to start our farms..... 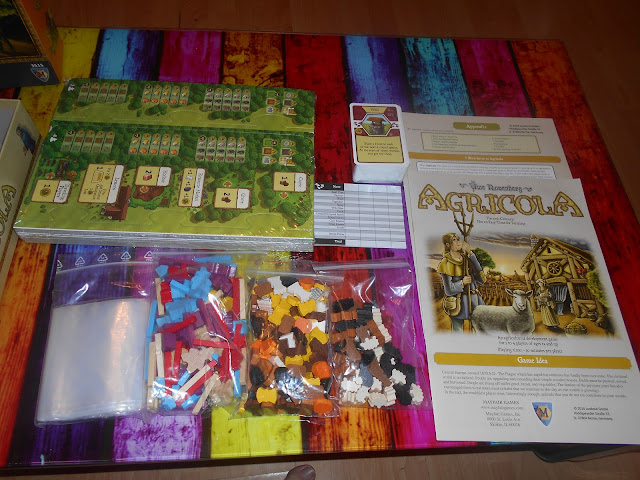 You get a ton of bits in the box, massed bags of wooden meeples, cards, loads of thick cardstock boards, and two rulebooks!!  looks a bit daunting, though i do like the bag of bags for sorting things out, pity the meeples had not been sorted first, though Olivia got stuck in doing that. 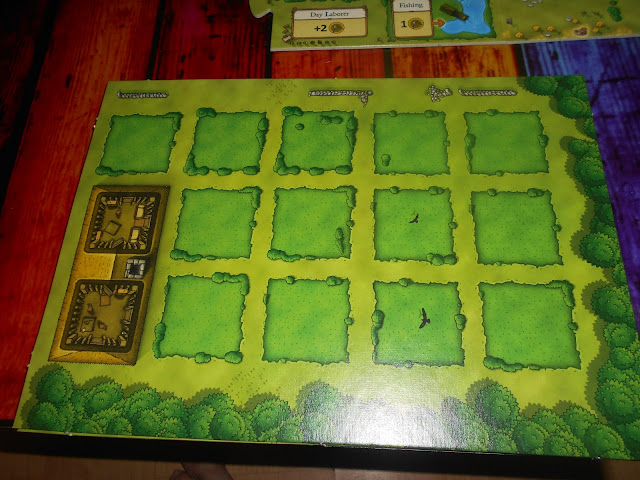 You will get 4 of these, which are the player boards representing your own farm and fields, you can see the two wooden rooms of your house you start with and you can then later expand them to clay or stone, and plant crops, or put fences up for animals in your fields, there are lots of options, but making sure your family which you can grow too doesn't starve is vital. 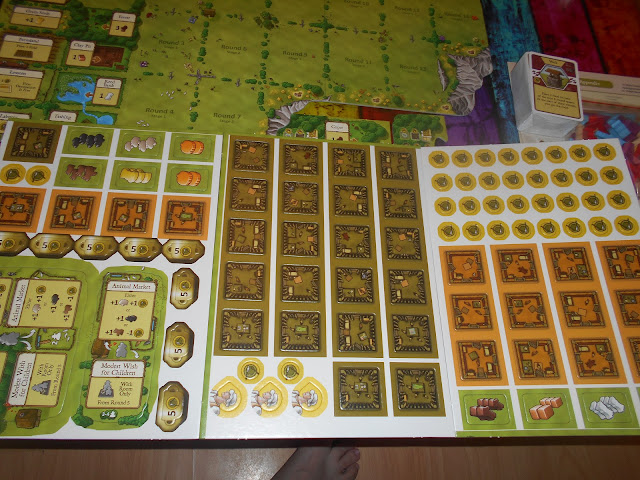 There are a whole laod of tokens that need to be punched out and sorted and stored, good thing for the bag of bags right!! these represent thing like new rooms for your house made of different materials, or food stuffs. 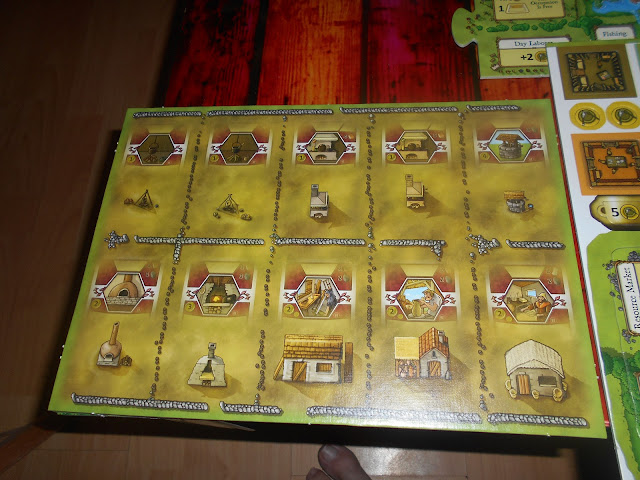 This sideboard (the game takes up a lot of space) shows improvements that can me made to your farm making life easier for our poor little farmepples. 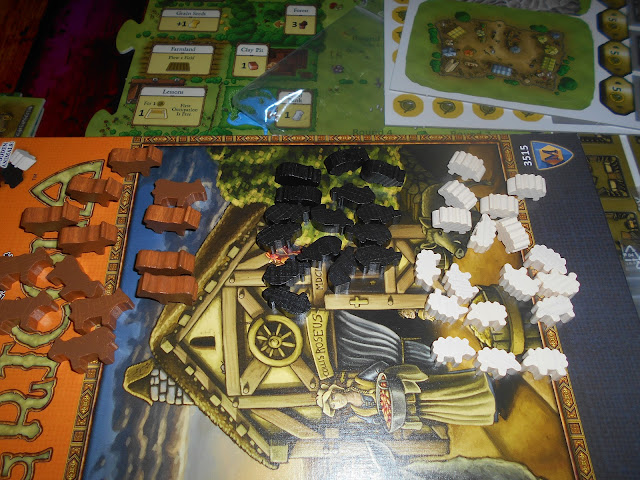 The wooden meeples are lovely, they represent the livestock you cna have on your farm, sheep, boars and cattle, all look like their pieces, and this was very much Olivia's favourite thing in the box, i had to make sure they all went back and some did not get "lost" into Olivia's pockets. 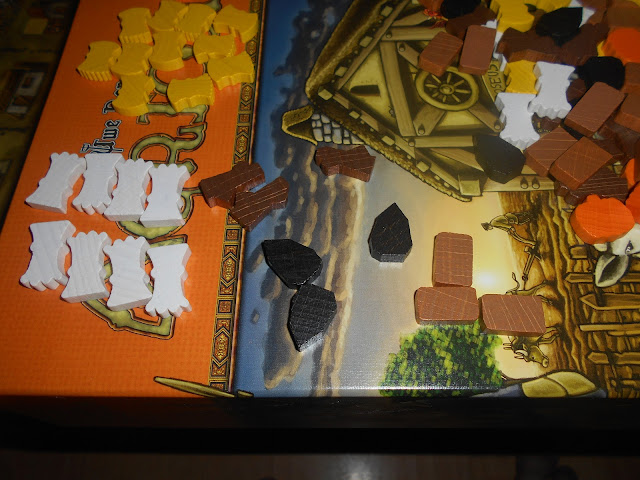 The resources are also in lovely wooden tokens, for wood, clay, stone and reed.  Very happy with the production of these, they are great. 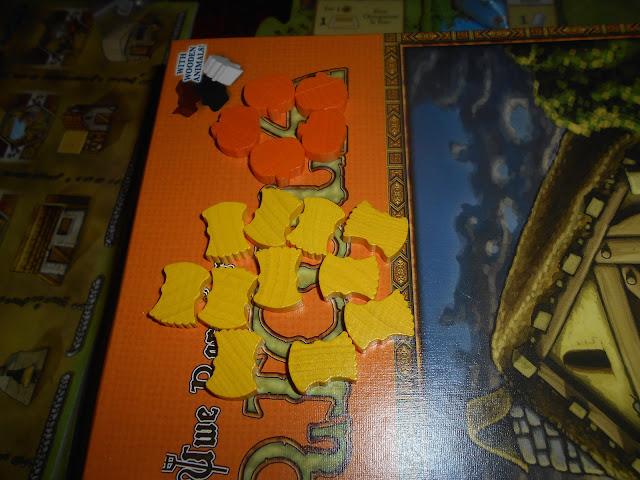 Again the wooden tokens for wheat and vegetables are lovely. 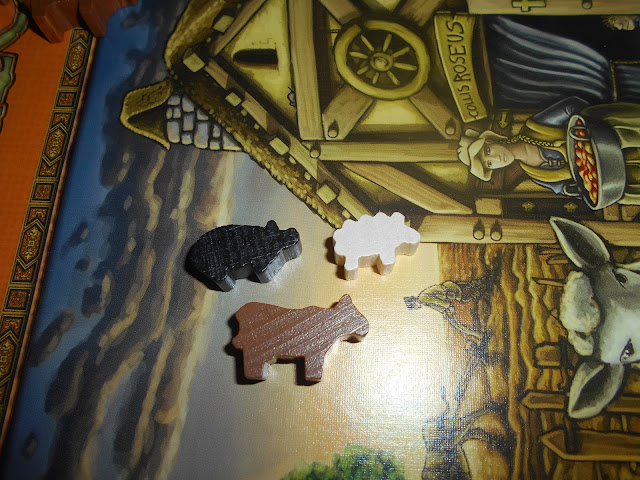 Olivia wanted a close up of the animeeple so here they are.... i will certainly have to keep my eye on the box! 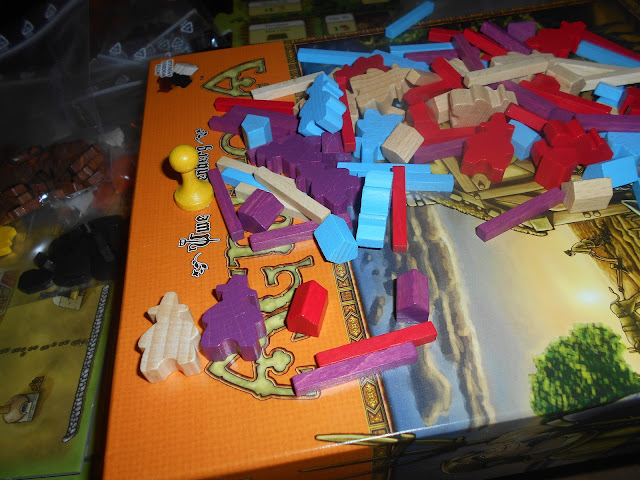 Each player gets a set of tokens as well that represent their family, fences, and stables for fields, all again very nice, though Olivia wasn't impressed they where not girls, though i said it could be a girl with her hair under the hat... that appeased her slightly.  The odd yellow token acts as first player token. 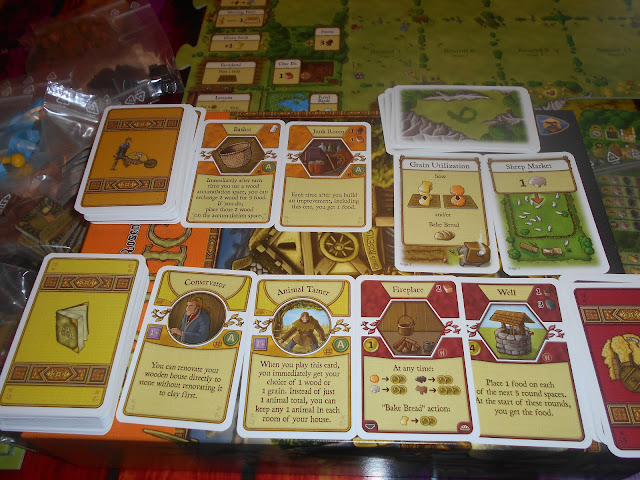 Then we have the decks of card, we get Major Improvements, like the well and fireplace that help your farm run more efficently, we also get occupations like animal trainer or conservsto that can add bonuses to you, and minor improvements like the basket.  These card have a handy symbol on them telling you about the player count for that card, so some may be 1 plus, so suitbale for all sizes, and some cards may be3-4 players only, so you will need to go through and sift the decks before starting to get them ready relative to player size of the game.  Then there are round cards, these go on the main board of the game and get turned over each round providing different abilities, or actions you can use. 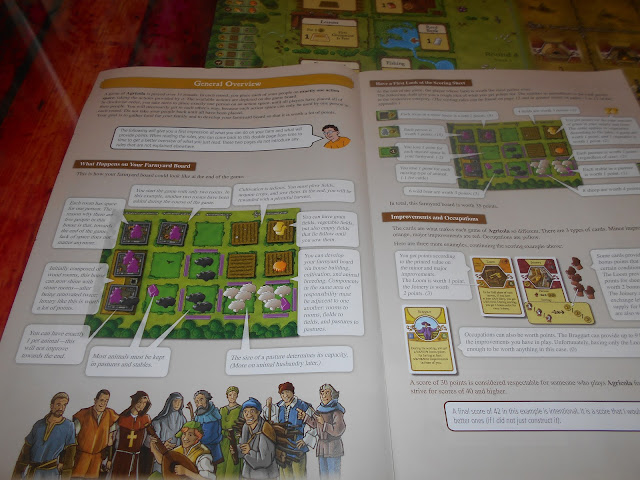 The main rulebook does give plenty of examples, and you can see above how your farm can grow, then after all the turns are over you score, and it guides you through things in here on how to do that.  The second rulebook is an appendix that has some useful information and reference in it so its well worth having a good read of these both a couple of times before you start.  I am not sure why but it took me a few read through, to get the hang of this game, as it can be quite complex at times. 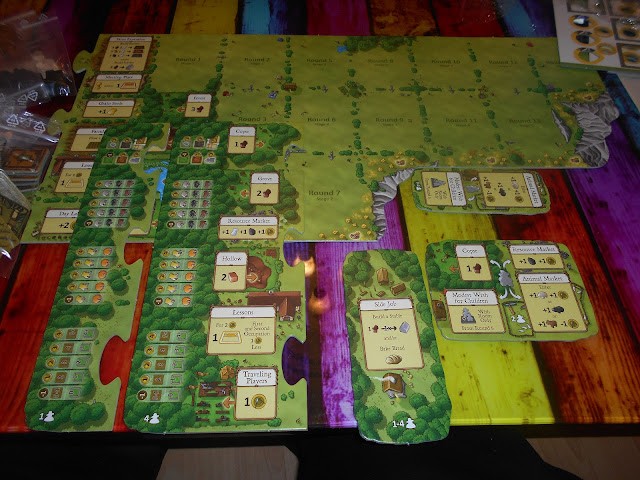 The main game board has different add ons that clip in or are placed depending on the amount of players, and these show the available actions, and have spaces for the round cards to go so you can always tell.

Now a quick mini overview of the rules....

It is a turn-based game. There are 14 game rounds occurring in 6 stages, with a Harvest at the end of each stage (after Rounds 4, 7, 9, 11, 13, and 14).  Scores are calculated at the end of the game depending on how successful you are, having multiple animal types, upgrades, better houses, more family members and so on.

Each player starts with two playing tokens (farmer and spouse) and thus can take two turns, or actions, per round. There are multiple options, and while the game progresses, you'll have more and the first thing in a round, a new action card is flipped over.

Each action can be taken by only one player each round, so it's important to do some things with high preference if you really need them, or you can look to block your opponent from doing them.

Each player also starts with a hand of 7 Occupation cards and 7 Minor Improvement card that he/she may use during the game if they fit in his/her strategy. Speaking of which, there are countless strategies, some depending on your card hand. Sometimes it's a good choice to stay on course, and sometimes it is better to react to your opponents' actions, look to block them off instead of playing your own long term plan.

Its a game that can be played well solo, and is very deep tactically, though i do admit it was not one of the easier games i have played to learn or teach, and took a few read thorough to get things down.  The amount of boards and options look complicated, but do not be worried, once your are going and into the swing of things it will become easier and more natural to figure these things out.

The theme of the game is very solid with you having to make hard choices at time, do you let your family starve a turn where they get a beggar card which can have a negative scoring effect? or do you concentrate on food sacrificing something else instead.  There is plenty of replay value in the box with a huge amount of cards to choose from, and different cards being available at different player numbers

This was a hard game for me to learn, but i loved the animals in it, and growing my own crops on my farm, it was fun pretending to be a farmer.

There is plenty to do in this game, and you will get plenty out of it, but its not for everyone as it can be quite a complex daunting looking game.  If you can get past that though you will find Farming was never so much fun!

With an RRP of £49.99 you get plenty in the box with solo and multiplayer modes, so head on over to your local game store and ask them to pick you up a copy.