Marvel Legendary is a solo and co-op card game, where you lead your team of heroes, (or villains) against a mastermind to take them down.  We looked at one of the "core" games, Marvel legendary villains before, so now to look at one of the available expansion packs and see what it adds.  Secret Wars Volume 1. 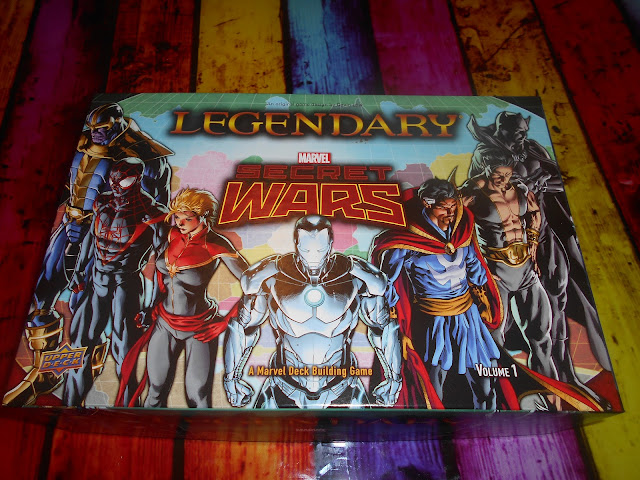 Legendary: Secret Wars - Volume 1 is the second "big box" expansion for Marvel Legendary since the Dark City release in 2013. Players can work both with and against other players to defeat the various Battleworlds while laying waste to planet Earth! The game features playable characters from the Illuminati, Cabal and favorites from alternate universes including Black Panther, Dr Strange, Namor, Miles Morales, Captain Marvel and Old Man Logan. Find 14 new Heroes, 6 new Villain groups, 5 new Masterminds and 8 new Schemes. Build your team to battle against the various universes in Battleworld including the Domain of Apocalypse, Monster Metropolis, The Deadlands, Limbo and The Wastelands. For the First time EVER - players can now play as the Mastermind against the other players! 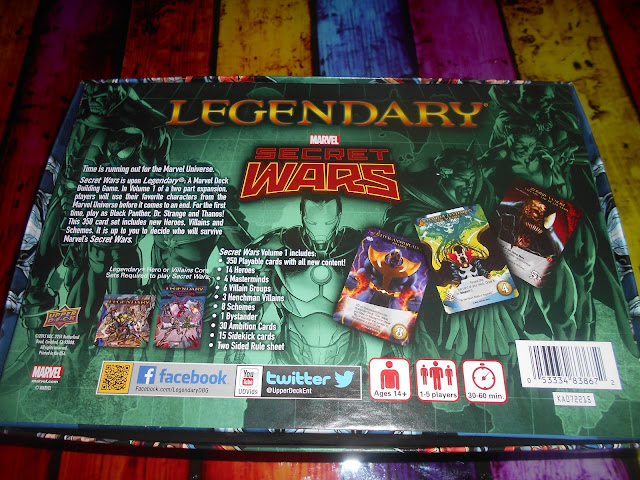 350 new cards, all with new content will add a huge amount to your game, 4 masterminds will really change up the way you play as well.


New Heroes
Illuminati: The 2015 Marvel storyline Secret Wars begins with a terrifying discovery: all the parallel dimensions in the Marvel Universe are hurtling towards each other! Wherever they collide, only one dimension will survive. The other will be utterly destroyed! The smartest genius Heroes in the world band together as the Illuminati, in a desperate search to stop it.
Cabal: Meanwhile, a group of evil geniuses form the Cabal with a different plan: stop other dimensions from colliding with ours…by destroying them all with antimatter bombs! 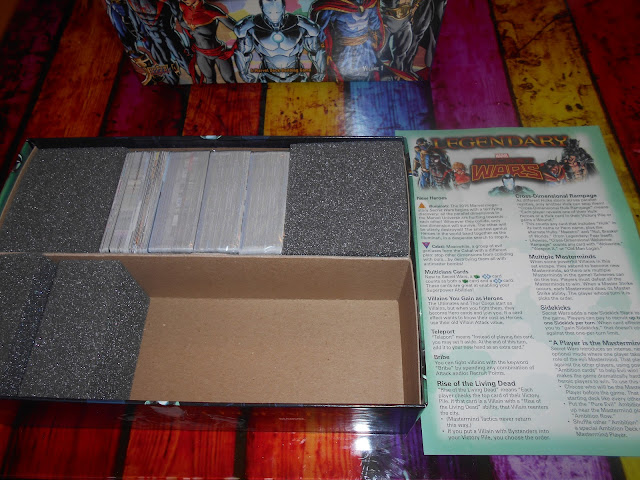 As in marvel legends the box makes for an excellent card storage system with foam blocks in to keep it all nice, and you do get apart from all the cards a double sided rule sheet. 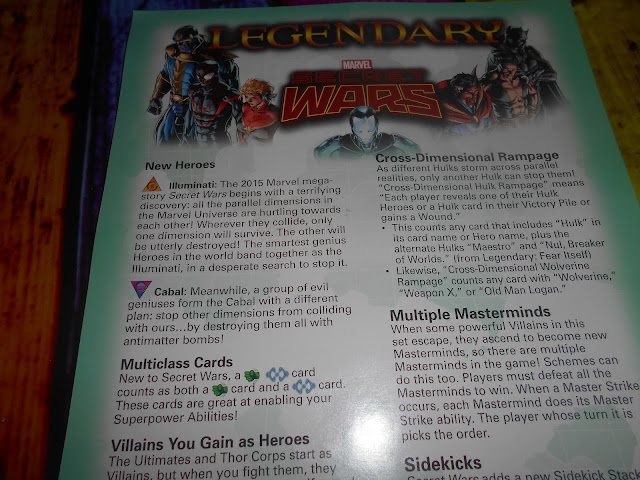 The rules sheet does not cover the full game rules, you will need a core game for that, but it does tell you about the new cards, and some new rules, multiple masterminds being a rather daunting prospect!, and sidekicks that can help you. 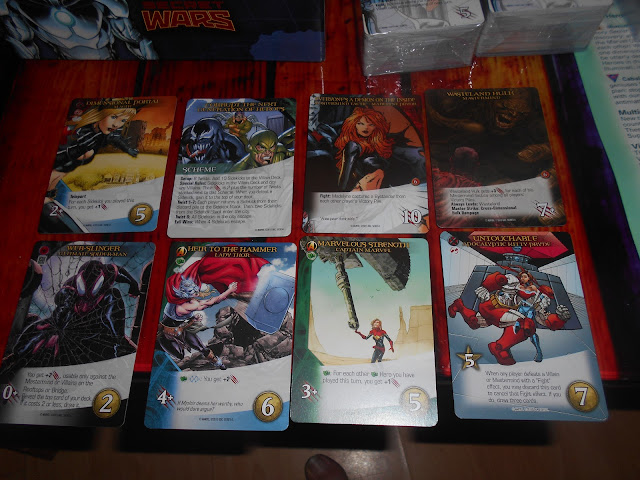 As with the other Marvel Legendary we looked at, there are too many cards to go through them all, so just a few highlights will be shown.  The art on them is just fantastic, and it introduces some new twists on characters, like wasteland Hulk, and lady Thor and the lovely Magik. 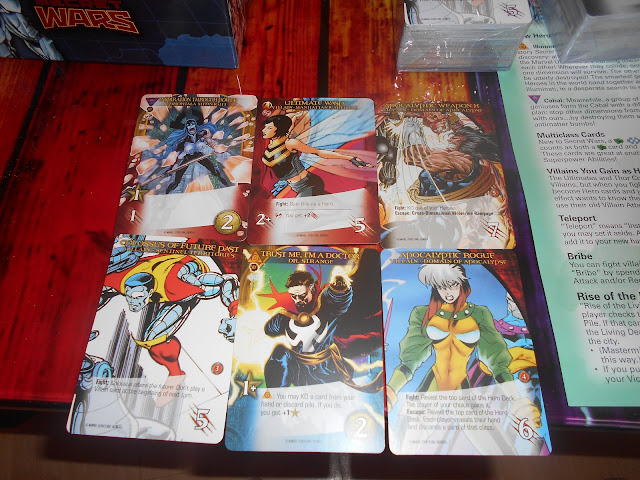 Showing different but complimentary styles of comic art makes these cards truly lovely to look at as you deck build. 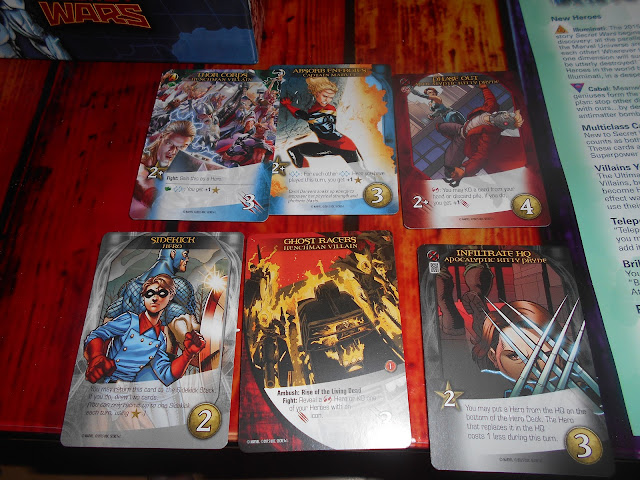 Still the same excellent quality of cards as well. 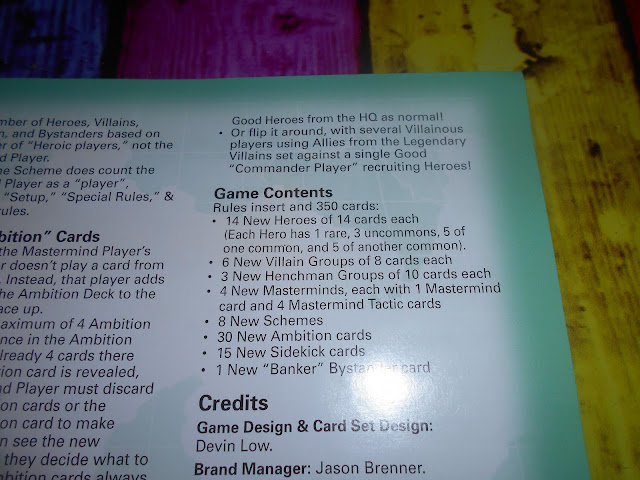 You get a lot in this expansion box, 350 cards.... and as you can see above, plenty of variety too in new types.  Adding New Masterminds really will change the game up, as you can use them mixed in with the schemes of the original set to create an even larger pool of variety to battle.

All in all an excellent pack, more for the Marvel Hardcore fan as i did not know some of the characters, or really understand the Marvel multiverse theory, but then, its fun to find out and learn more.


with an RRP of £33.99 this expansion they will add hours of deck building let alone game play to your collection! so head over to your local game store and join the secret war.
Labels: marvel marvel legendary