Ticket To Ride Europe by Days of Wonder Review

Growing up living with my Grandparents I was spent many hours building model kits, and playing games, I also spent many hours watching my Grandfather's model train layouts.  These where huge things, it took up the entire double garage, he made all the scenery himself and it was fantastic, watching the locomotives puff around the many tracks, through tunnels, and up mountains.  Since then I have always a had a soft spot for the age of steam.

I had been aware of the original Ticket to Ride which is set in the USA, and heard of its many expansion sets, but had never got around to playing it. Until now.  I got my hands on Ticket to Ride Europe.  Having played the gam in digital format on my Xbox (also available on Android and iOS) I had a good idea how it played and I enjoyed it, so couldn't wait to get some time to dive in and introduce it to Olivia. 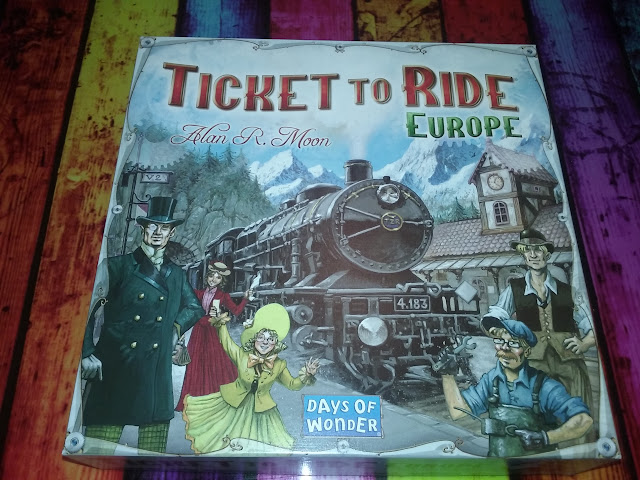 I love the art on the box, takes me to those pictures of travel in the early 20th century. 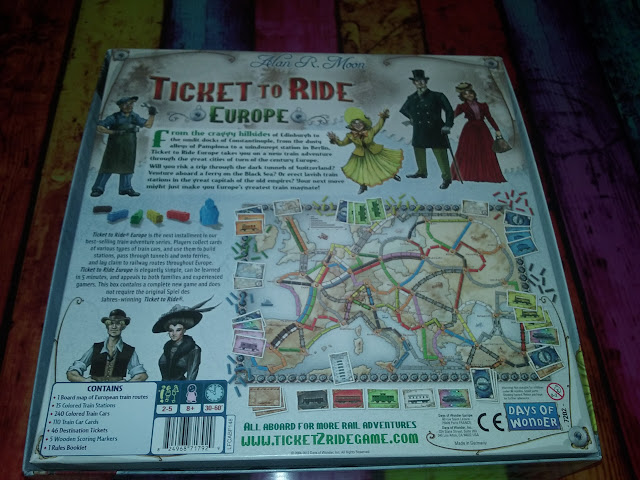 The back of the box gives a nice picture of the board, a contents list and overview. it recommends 2-5 players, ages 8+ (Olivia had it mastered and she is 6 so this is subjective) and 30-60 mins play time, we played in about 35-40 our first game, and got quicker as mechanics stuck with Olivia.

Inside the box is: 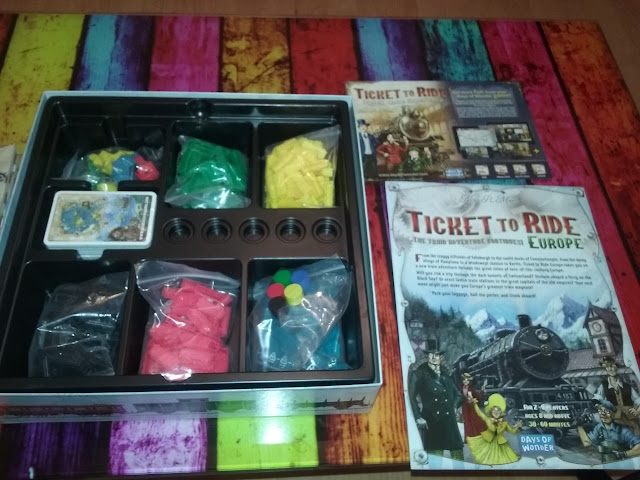 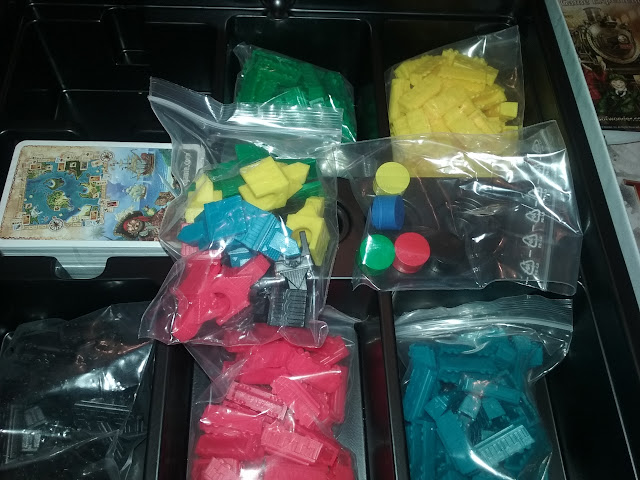 The train cars are plastic, as are the stations, they have a nice bit of character about them for game marker pieces, they do the job nicely. 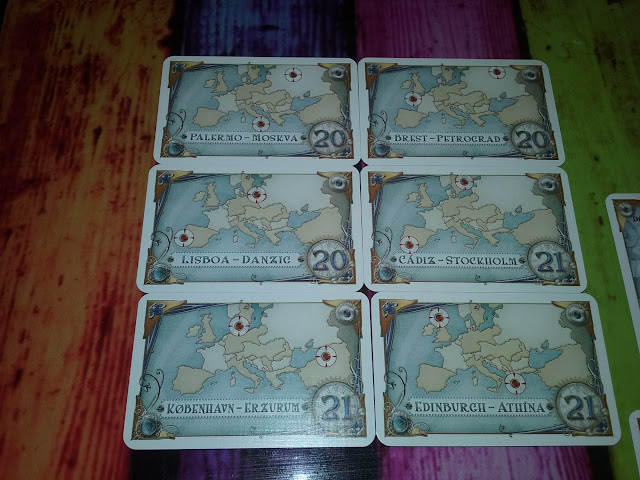 In the cards you get 6 long routes, these are dealt 1 to each player then returned to the box.  They score big points if you complete them and can swing a game, but if you fail, you also loose points. 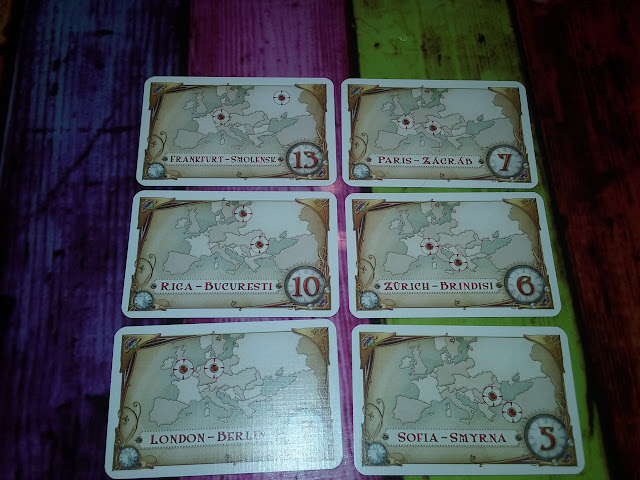 There is also a set of route tickets, that you can complete for extra points, linking one city to another. 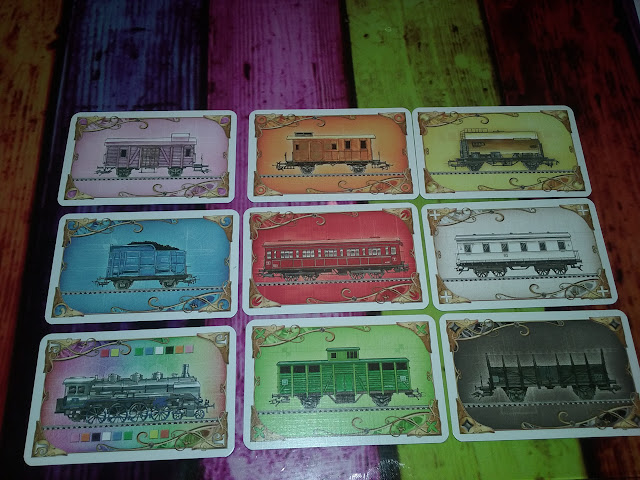 Here is an example of the coloured train car cards.  Each has a different styled car on it, and also a symbol in the corners that corresponded to the same coloured routes on the board, which is handy for colour blind players, a nice touch.  The locomotive counts as all the colours, sothey can be used as a "wildcard" (Mo- If you pick up a muti-color card from the face up ones, that's all you can do in your turn). 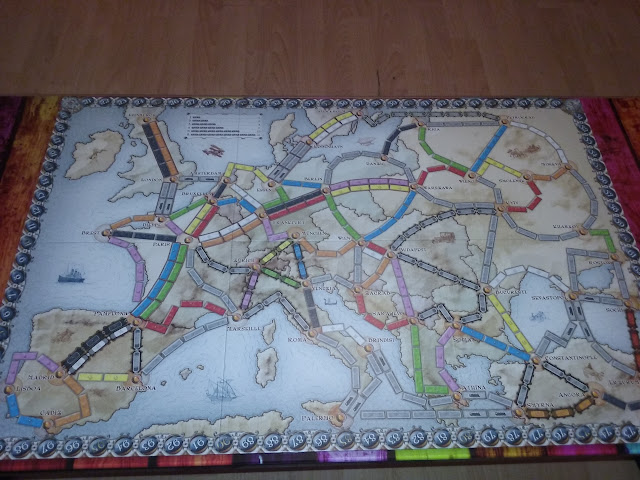 Then you get a beautiful large board that folds out. 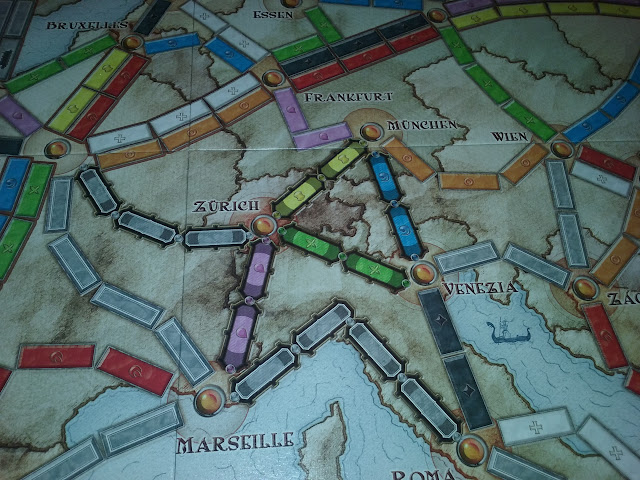 All the cities are in the native language of where they art from, which is another nice touch. 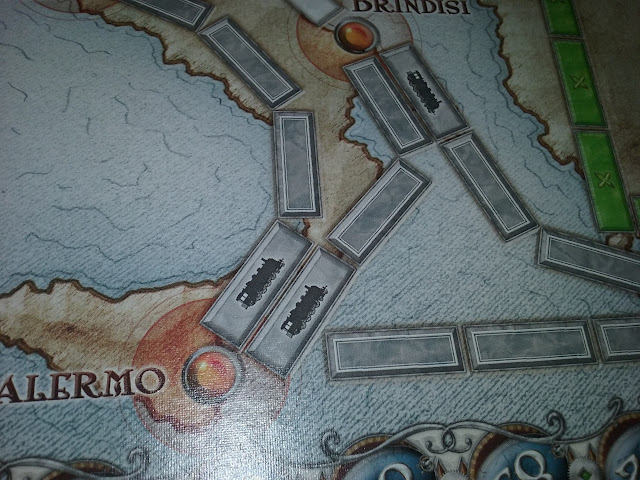 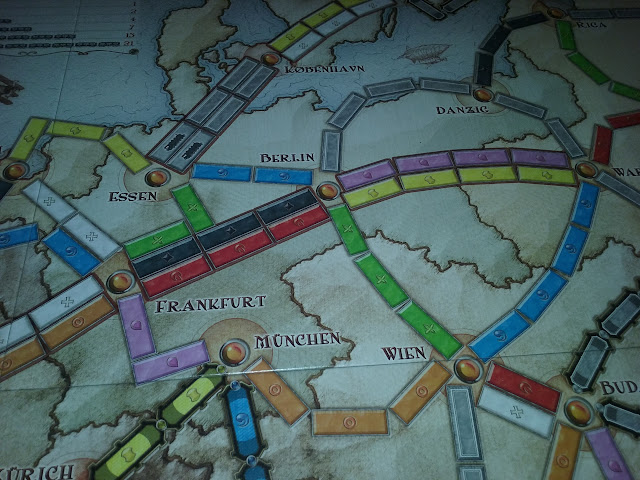 You can see the matching symbols from the coloured train cards on the routes.  To claim a route you need that many train cards of the same colour, or a mix of them  as in to claim from Wien to Munchen, you could use 2 orange cards, or 2 orange and a locomotive, or 2 locomotives and an orange, or even 3 locomotives if you so wished. 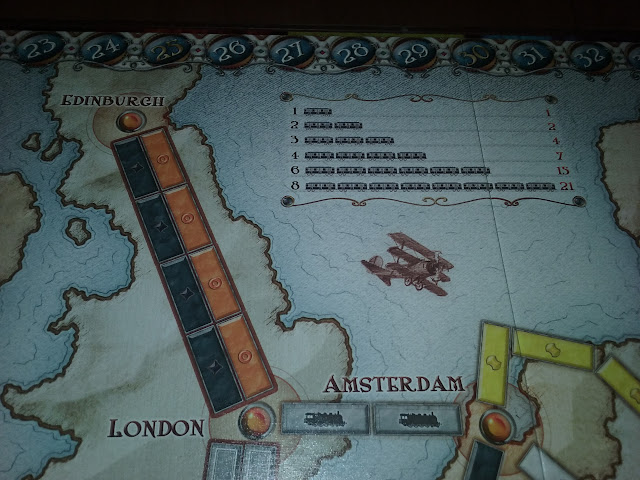 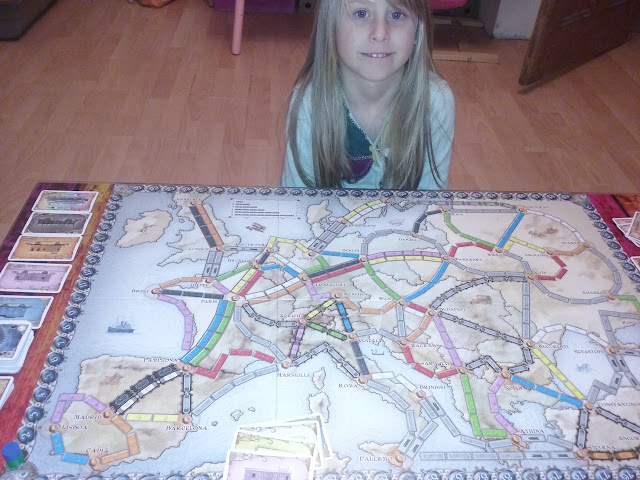 We decided to play this first game without destination tickets so Olivia could get the hang of the basics of the game.  We each picked a colour for our plastic train cars, I choose green, and Olivia blue.  I shuffled up all the train car cards, and dealt four to each of us, then placed it next to the board turning the top five face up next to the deck. 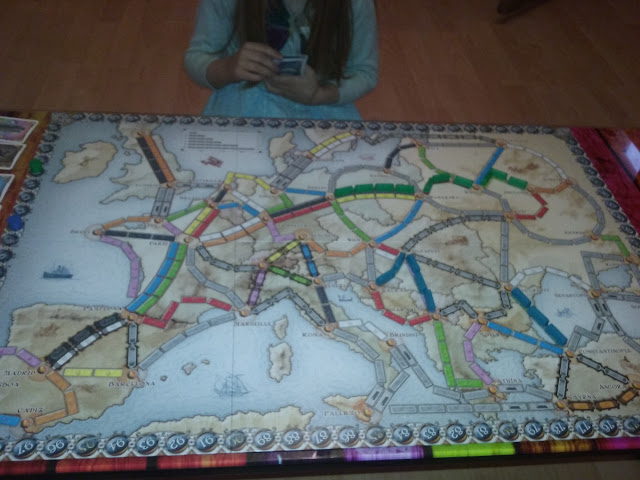 In a turn you have several options, you can pick up a card from the face up 5, if you do, you draw another one to replace the one you picked up. you can then draw another one from the pile and replace, (the only exception is if you pick up a locomotive from the face up pile then you only get one draw) or you can pick straight from the top of the deck. You can perform any combination, so one face up and one from the deck, 2 face up (if they are not locomotives) or 2 from the deck (Mo- sometimes you can pull two wildcards off the deck in one turn; rare, but keep a poker face!). 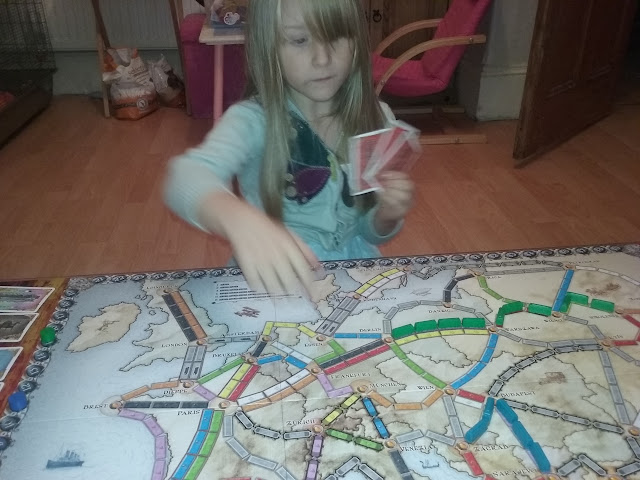 You can also draw a destination ticket, you must draw 3, and keep at least 1, but you can keep them all if you wish. 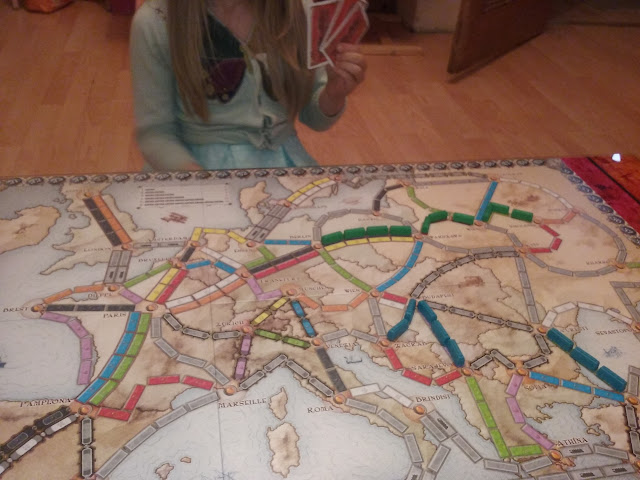 The most important action you can take on your turn is claiming routes.  You do not draw any cards, but you discard the matching train car cards from your hand to claim a route, and place your plastic Train cars on it to show it is yours.  You then receive the points for it, the longer the route, the more points you gain.  Olivia is playing 3 red here to claim a route to continue her dominance of southern Europe.  Some routes are ferries as discussed earlier, some though are Tunnels.  These routes have a jagged edge as seen in the bottom left of the picture heading into Pamplona.  When you want to claim a tunnel you must turn over the top 3 cards of the deck, if any match the colour you used you must pay an extra of that colour to claim the route.  If you can not you loose the route, but keep your cards and may not perform any other actions. 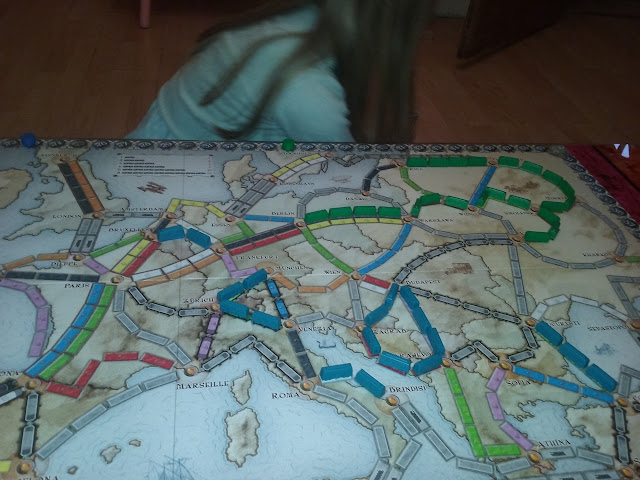 The last action available is to build a station.  You have a limited numbers of stations, and gain bonus points at the end of the game for retaining them, so its best not to use them unless the reward is worth it.  Your first built station costs one of a colour card, the second costs two of the same,  and the third costs 3 of the same.  You play the station on another players route, and can use that route in or out of the city to help you connect for your destination tickets. 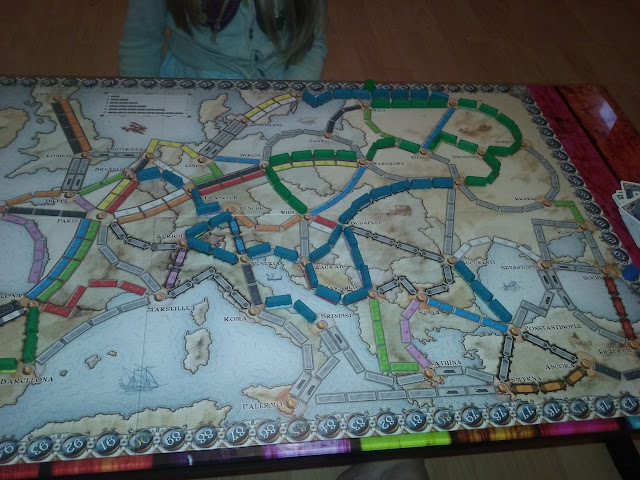 Olivia starts to dominate, having saved up plenty of cards early in the game to claim the big routes, and big routes are big points. 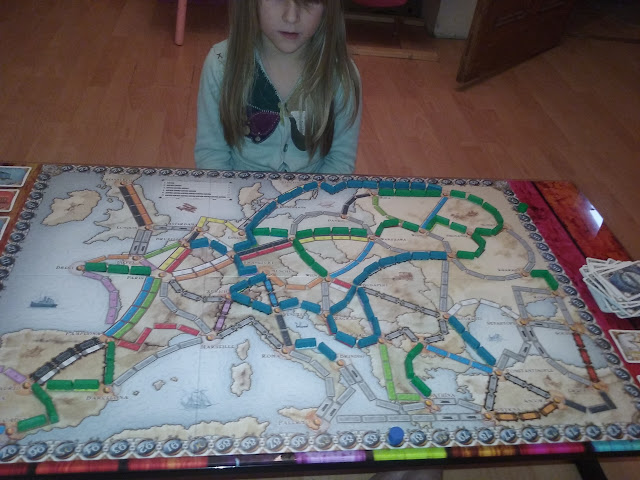 The game enters its final turn when any player has only 4 plastic train cars left.  Our game ended so we added the extra bonus which Olivia won, the longest continuous route.  Then you would also add or subtract scores for your destination tokens, but since we did not use them this time we skipped that part. 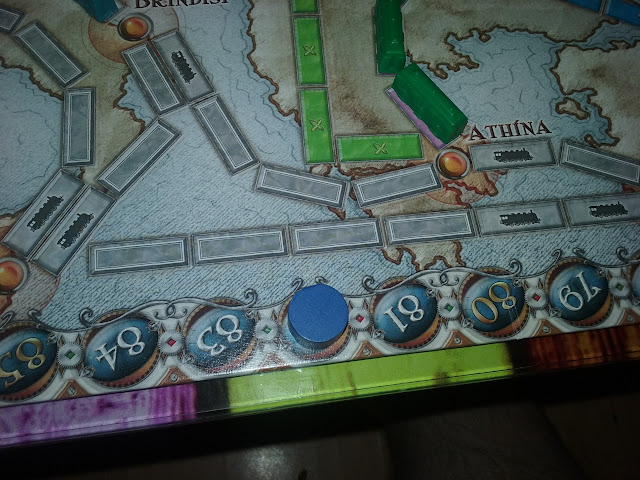 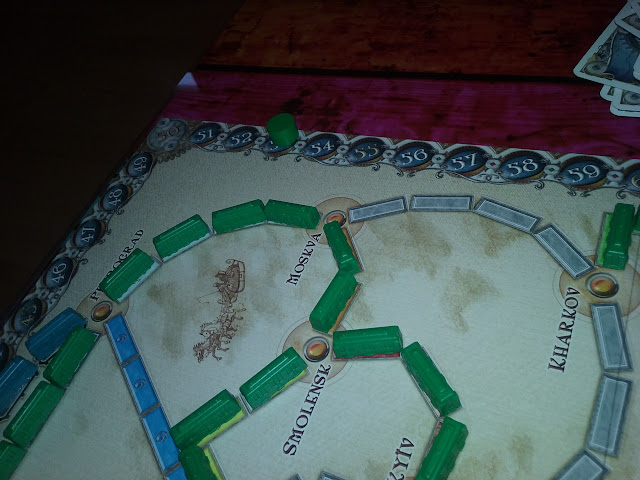 Next time we play we will use the destination tickets as Olivia has mastered the basics nice and easily.  When I asked her if she would play it again, she said yes it was really fun I would play it 1000 times! Of course she was rather gleeful in her victory. 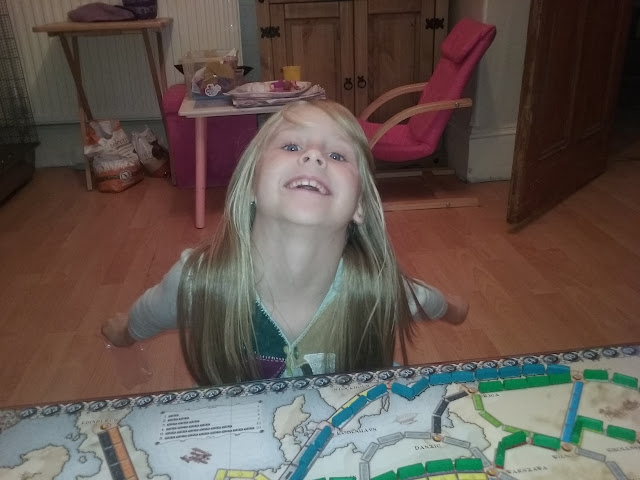 All in all a really fun game, some nice choices to make, do you save up those cards to get the routes you need and risk your opponent grabbing them, or do you start straight away claiming routes where you can.  Also start form one side and work to the other, or work from both ends and meet somewhere in the middle? lots of different choices, and with the different combinations of destination tickets no game will play the same way.

You don't have to be a train fan to enjoy it, its suitable for all players and ages, and is a must add to your collection.

Ticket To Ride is a great game, its RRP is £32.99 and you can pick it up at Waterstones on the high street or find your local game store here.  With the wealth of expansions available that provide new maps, and mechanics its a great buy. I cant wait to try the UK map of the game!

Mo- This is one of my favorites to play with folks who aren't big into gaming. The turns go by quickly, which keeps everyone interested in the game, unlike some other games.
Labels: days of wonder family games Ticket to ride