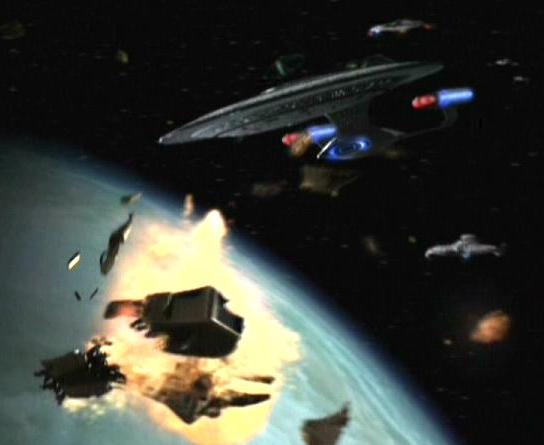 The USS Venture (NCC-71854) was a Federation starship, a Galaxy-class explorer in Starfleet service in the late 24th century.

n the year 2368, the Venture docked at planet Luxor IV due to a baffle plate malfunction.  In 2370, the Venture was sent to help in the clean up of the New Bajor colony after it was destroyed by the Dominion.  In 2372, the Venture was on a long-term diplomatic mission when news arrived of Klingon forces massing to attack Starbase Deep Space 9. Captain Roger Corbett volunteered to lead a task force to Starbase Deep Space 9 to protect the station after it came under attack from the Klingon Defense Force during the opening volleys of the brief Federation-Klingon War of 2373. 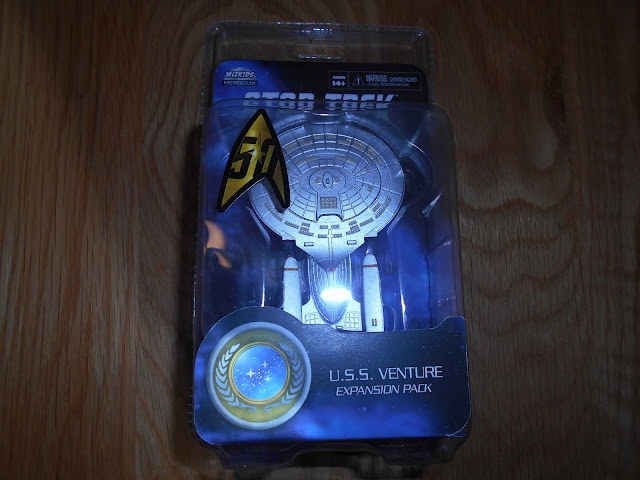 The ship saw heavy action during the Dominion War. In 2374, the Venture participated in Operation Return, the epic battle to recapture Deep Space 9 from the Dominion. She was amongst the first ships to arrive at the station after the Dominion retreat.  The Venture participated in the First Battle of Chin'toka in December of 2374, helping the allied forces capture that system.  Following the end of the war, the Venture battled Legate Matan's renegade forces, and was heavily damaged in the battle.  Olivia Bolaji served on the Venture prior to her assignment on the USS Titan in 2379. 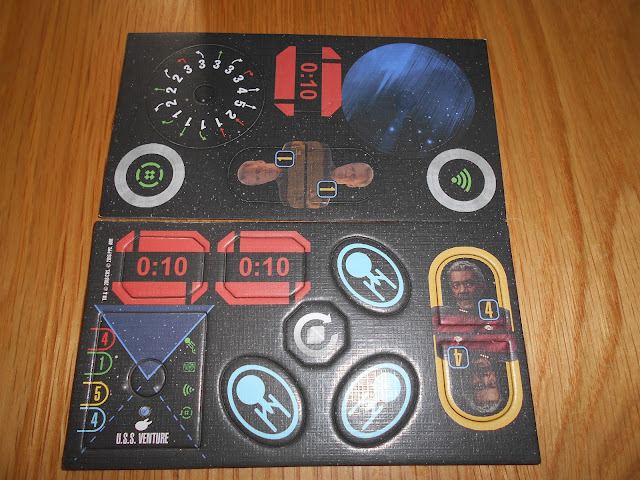 Luike a lot of the new waves it doesnt come with all the tokens you need, its expected you have some already, i am not sure i agree with that though, as what if you wanted to play a mega battle with ALL your ships.... well you cant!  Anyway.... lets see, it has some shields, but not enough, it has a scan and battlestations, but no target lock or evade, its getting a bit erratic as to what you get if anything! 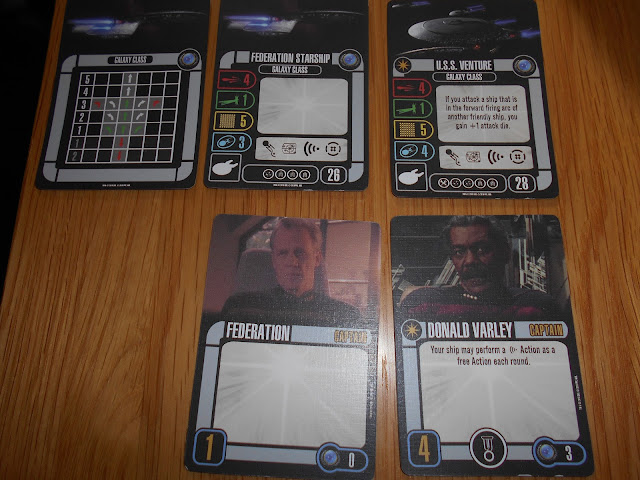 The ship herself is a standard galaxy,  good firepower, but not that nimble, and good hull and shields.  Of course you get the generic captain and ship, and then the named USS Venture.  Her ability is if you fire at a ship that is in the firing arc of another friendly you get an extra attack dice, thats nice and passive i like it, easy to do and you do not have to waste an action.  For Captains we have Donald Varley, hes skill 4, and gives you a scan as a free action, very good! things that give free actions are well worth it.  The only issue i have, is he was the commander of the Yamamato Galaxy class, not the Venture, so seems a bit odd. 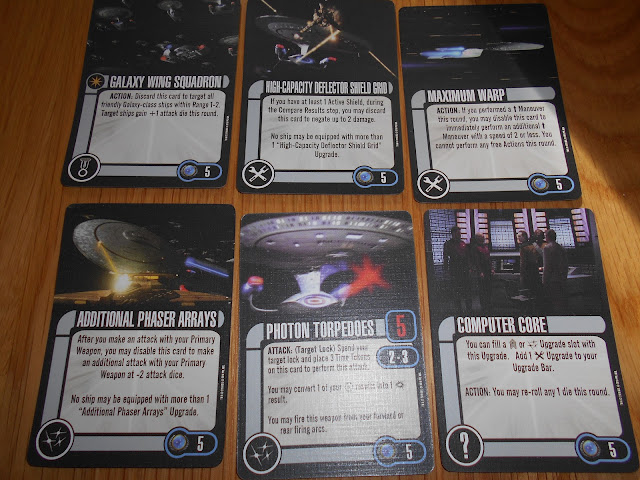 Onto upgrades, for a 5 point elite talent we have Galaxy Wing Squadron.  Its a discard, that lets all friendly galaxy class shiops in range 1-2 get an extra attack dice.  This is very situational, as Galaxy class ships are not cheap, and this is a 5 point discard, im not that impressed with this card.   High Capacity deflector shield grid is a tech that that if you are hit, and have at least an active shield you can discard this to negate up to 2 damage. its 5 points, but it can stop two damage, so i think its worthwhile to keep you in the fight a bit longer.  Maximum Warp is another Tech card that as an action lets you make an additional forward move of speed 2 if you have already done a forward move, so letting you get up speed 7!

Additional Phaser Arrays is the star card of the pack in my opinion, its a disable, but lets you make another attack with your primary weapon at minus 2 dice, so yes it becomes a 2 dice attack, but if you are range one, you can swing for a 5 and a 3 causing hopefully maximum damage.

Photon torpeodies, are standard time token deal, and can be fired from front or rear arcs, so handy to cover your rear on such a lumbering ship.

Lastly we have Computer Core. its a ? upgrade so can fill a crew or weapons slot.  It adds a tech upgrade to your bar (really handy on the Enterprise D) and as an action lets you re-roll one dice per round, i would only really use the action if i had a warp core breech, but the getting a tech slot is very handy. 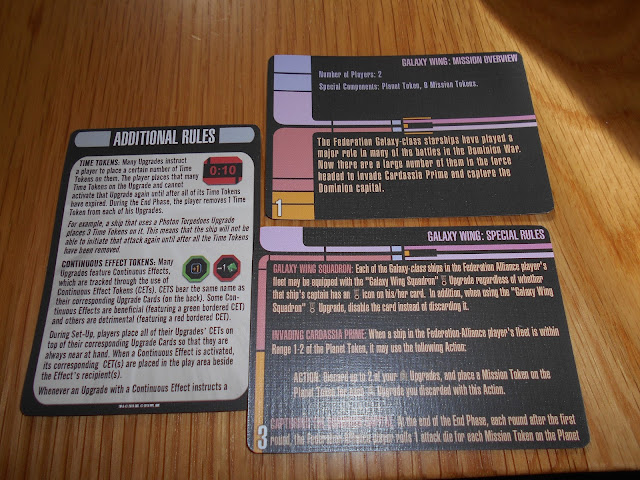 You get the additional rules card, and the Mission galaxy wing, a large 200 point game Federation, vs Dominion. 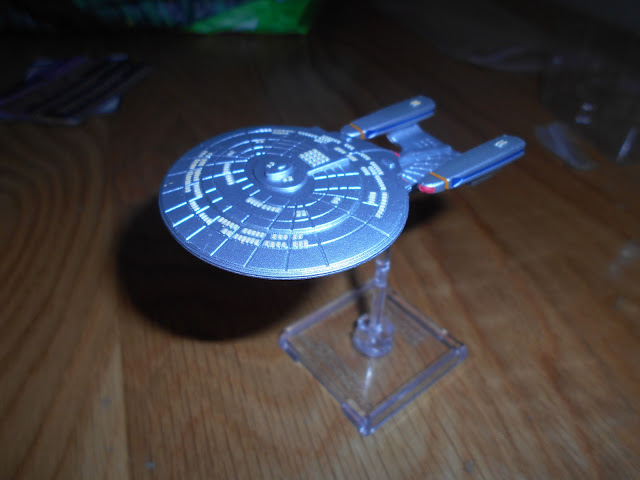 The ship itself is the same model as the starter set, just silver, but since i liked it fine i have no issues with that. 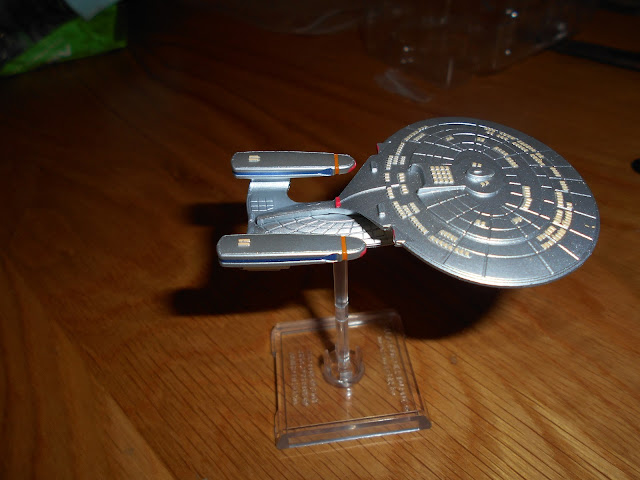 The paint job is a bit neater then the starter, though i am a bit unsure on why the Federation ships seem to be silver now.  With a wash though it will come out quite nice.