Carrying on the second cycle in A Game of Thrones the card game we look at what new drops in for us with Called to arms.  Like all the expansion packs you get 60 cards, 20 new ones, with 3 copies of each for your deck building.

“Lady Catelyn, you are wrong.” Brienne regarded her with eyes as blue as her armor. “Winter will never come for the likes of us. Should we die in battle, they will surely sing of us, and it's always summer in the songs. In the songs all knights are gallant, all maids are beautiful, and the sun is always shining.”
–George R.R. Martin, A Clash of Kings 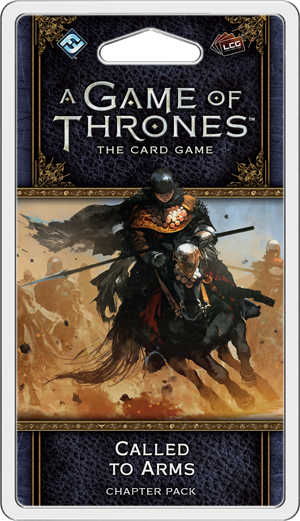 The banners have been called in the War of the Five Kings. In the north, Robb Stark gathers his armies around Riverrun, preparing to strike out at Tywin Lannister’s forces. Joffrey Baratheon has ascended the Iron Throne in King’s Landing, Renly Baratheon has been crowned in Highgarden, and on the islands of Dragonstone and Pyke, Stannis Baratheon and Balon Greyjoy plot their own rise to power. Before long, great armies will march onto the field of battle, while subtle intrigues and assassins’ daggers decide the fates of countless others.

Lets crack it open, and take a look at the new cards. 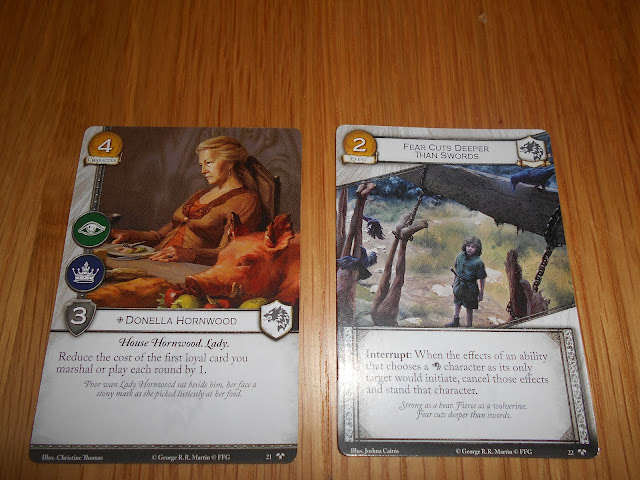 Donella Hornwood, 4 cost 3 strength with intrigue and power icons.  She is a great reducer as she lets you reduce the cost of each LOYAL card you play each round by 1, so will pay for herself over time.

Fear cuts deeper than swords is a 2 cost event that is an interrupt.  It works when any card has abilities that would target a stark character.  This then cancels the effects and stands them.  Very handy if your opponent tries something sneaky, as they will not expect that character to then stand and be ready to face them or add to the dominance claim. 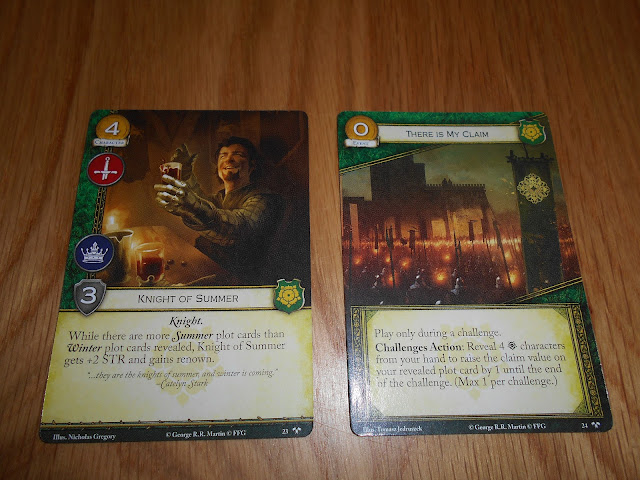 The Tyrells get theri new cards int he form of the Knight of Summer.  a cost 4, 3 strength charactr with military and power icons.  If there are more summer plots revealed then winter plots he gets +2 str and renown! so if you are building a summer plot themed deck, he is a must, though of course it still works if your opponent is playing a summer deck.

There is my claim is a 0 cost event that can only be used in challenges. You must show 4 Tyrell characters from your hand, but it raises your claim by 1 for that challenge, this can be devastating when played right allowing you to cause huge damage, or gain a ton of power, though of course you need those cards in hand first. 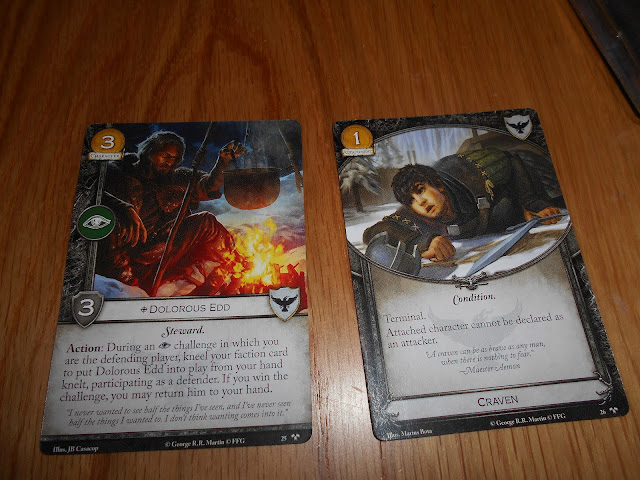 The Nights Watch get Dolorous Edd, a 3 cost 3 strength card with only the intrigue icon (which nights Watch is a little lacking in)  He has an action you can use in the intrigue phase if you are defending player.  You can kneel your faction card  to play him fom your hand knelt into the challenge as a defender.  If you win you can return him to your hand and have him as a suprise again, or keep him out there.

Craven is a 1 cost attachment where the attached character can not be declared as an attacker.  This is ideal to play on your opponents big scary cards, or ones with stealth to stop them causing havoc. 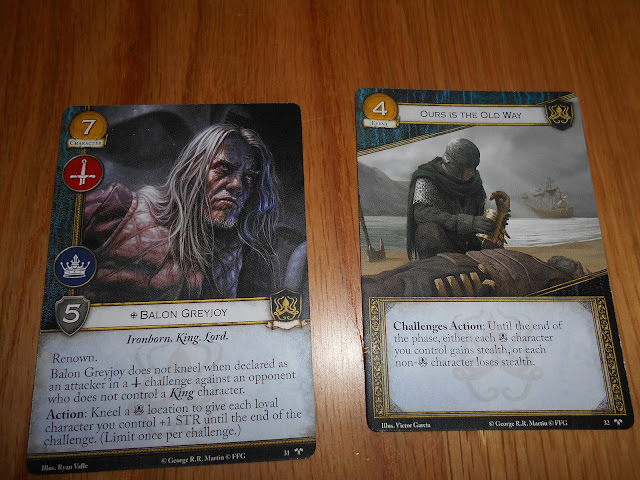 House Greyjoy get a new version of Balon with i must say excellent art, and tied for my favourite piece in the pack.  He is cost 7, so pricey, strength 5 with military and power icons and renown.  He does not kneel when attacking in a military challenge against any opponent who does not have a King trait character out.  He also has an action that lets you kneel a greyjoy location to give each loyal character you control +1 str, so a  nasty little surprise in a challenge there for some people.  I really like this version, he is a beast, not kneeling and with renown he should be bringing in the power and smashing your opposition. 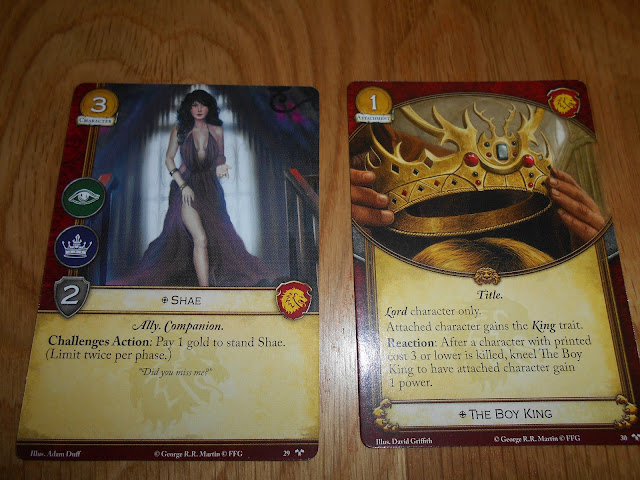 Ahhh my beloved Lannisters.... firstly we get Shae, who wins my favourite art of the pack.  She is cost 3, str 2 with intrigue and power.  She is not the strongest character around, but her ability is very handy, as you can pay a gold to stand her twice per phase in the challenges, and being Lannister having gold is never usually an issue.

The Boy King is a 1 cost attachment that can only go on Lord characters.  It does then give them the King trait, and as a reaction, after a character of str 3 or less is killed (yours or your opponents) you can kneel the Boy king to have the attached character gain a power.  give this to some one like Tywin and he is bringing home power all day long. 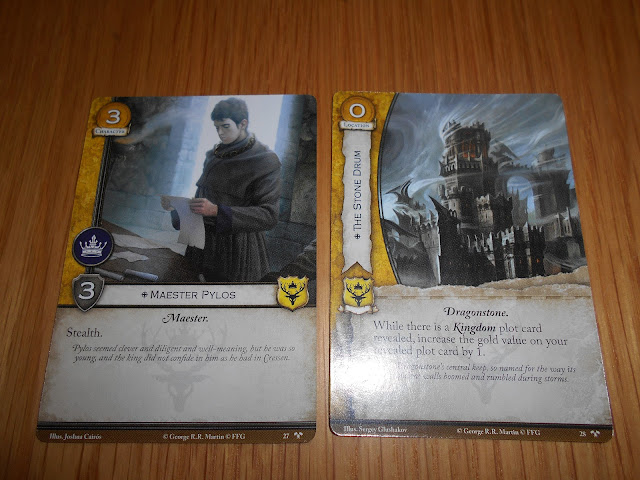 Baratheon gain Maester Pylos, who is 3 cost, 3 str with power icon and stealth.  Nice and simple, but that stealth will make him effective.

The Stone Drum is a 0 cost location, that helps whilst a plot with the Kingdom trait is revealed by increasing your gold by 1. 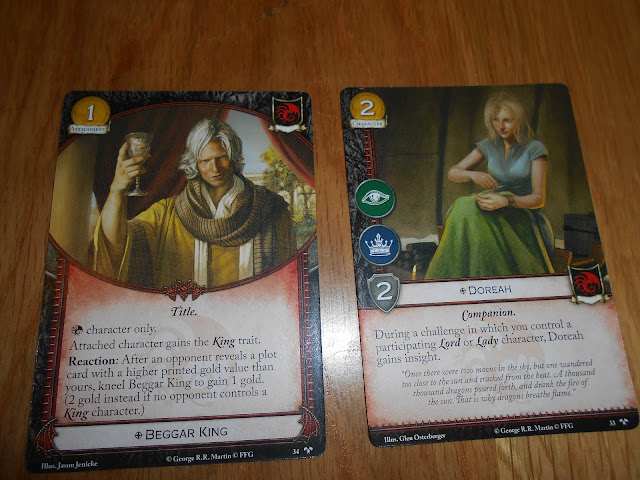 The Targaryens get a 1 cost attachment with Beggar King, which can only go on Targ characters, but it gives them the King Trait.  It has the reaction that after an opponent reveals a plot with more gold than yours you can kneel the beggar king to get an extra gold, 2 if they do not have a king in play.

Doreah is a 2 cost character with intrigue and power and a str of 2.  During a challenge where you control a lord or lady she gains insight, so a handy card to push into challenges with them. 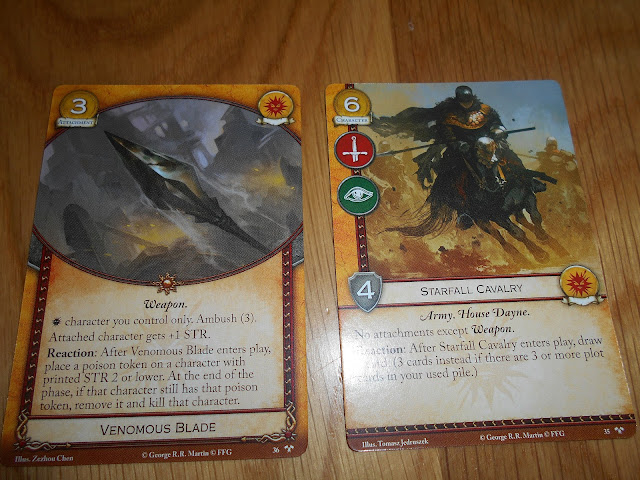 The Martells get new cards, as it always seems with them the art is fantastic.  The Venomous Blade is a 3 cost attahcment that can only go on Martell characters, and has ambush as well for that extra bit of sneakiness.  It gives the character +1 str, and has the reaction after it enters play you may put a poision token on a character with str 2 or less, and if still there at the end of the phase you remove the token and kill the character.  Its a good double hit of increasing str and killing someone off, so well worth including, and its not unique so you can have multiples out.

Starfall Cavalry are a 6 cost 4 str army with military and intrigue, they also have the reaction that when they enter play you can draw cards, very useful! 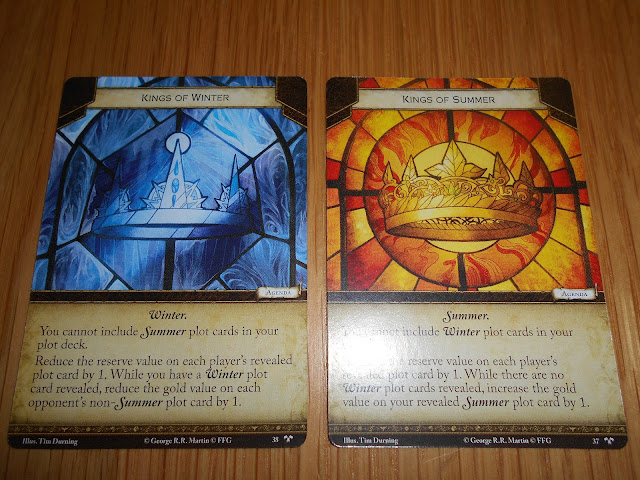 We get a pair of new agendas as well, the Kings of Winter means you cna not include summer plots in your deck, and reduces the reserve value on all revealed plots.  Whilst you have a winter plot revelaed reduce the gold on your opponents non summer plots by 1.

Kings of Summer works the same as Kings of Winter, just take out the term winter and replace with summer! 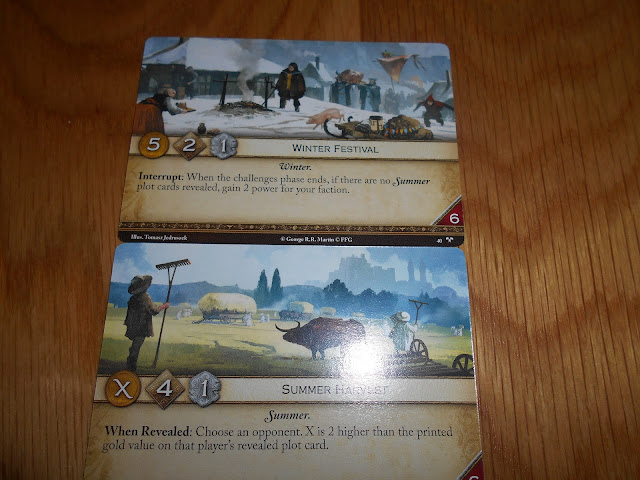 The pack is nicely rounded out by two new plots, the Winter festical which can be very powerful as if there are no summer plots revealed you gain 2 power for your faction (remember when you hit 15 you win)

And the summer Harvest, where you get 2 more gold then your opponents revealed plot.

So.... whats this pack like? i think its another great addition, i really like the new version of Balon, and the addition of new agendas to try out.  when a new set comes out it totally throws up in the air (in a good way) my thinking about my deck, as there is always something that links back to another trait, or ability, or a plot that unlocks something else you may have forgotten about, and its a perfect time to change things up and try something new.  The way the agendas can let you push for summer or winter themed again adds another device to your arsenal, do you go for that, or ignore it? Its another option to try, though be aware, as your oppoent may go for that theme too, so be on the look out.

Head on over to your local game store to pick this up with an RRP of £13.99 it will add plenty to your game!
Labels: a game of thrones lcg Fantasy Flight Games