Colt Express unboxing and review from Asmodee games and Ludonaute

Time to head off into the Old West with Colt Express.  In this action packed game for 2-6 players we play bandits, robbing a train, holding up passengers, and generally causing all sorts of mischief. 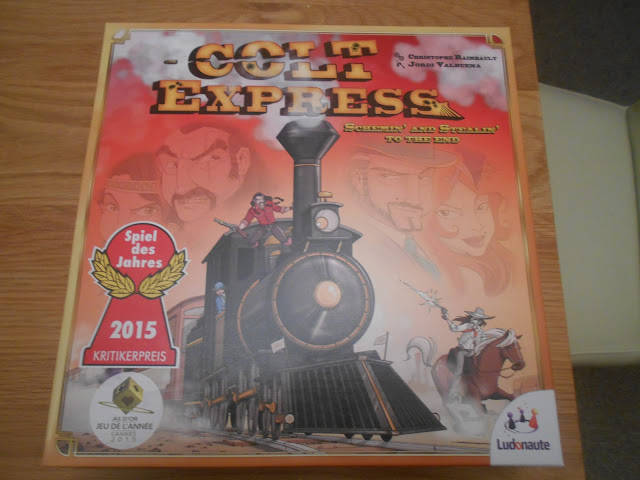 With a string of awards to its name, its time to have a look, and see just how much fun can be had with this game. 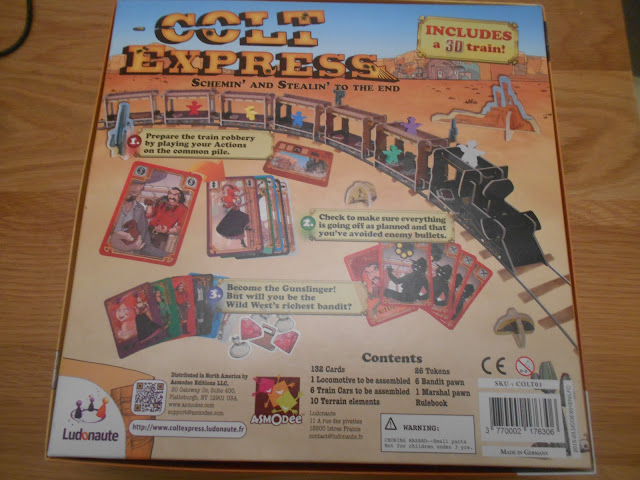 The game plays 2-6 players, and comes with plenty of goodies as you can see from the back!
So lets take a look in the box and see what the game is like........ 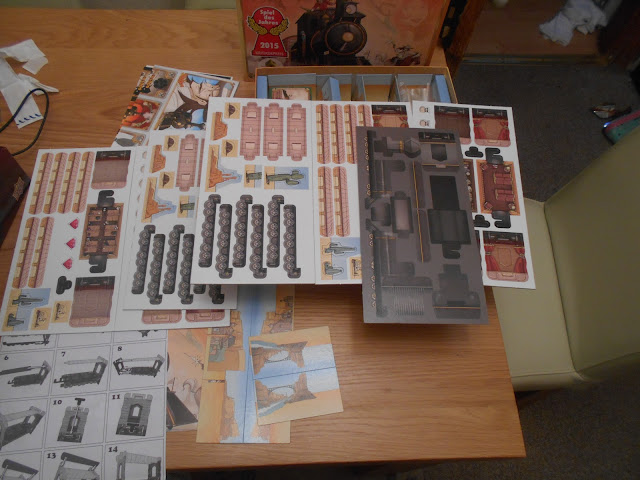 The game is packed full of bits, so you will not be playing this straight out of the box, some assembly time will be needed first, but its well worth it, as it is one of the most visually appealing games I have ever played.
You get the choice of 6 characters, each with their own special ability, which is not game changing but adds a nice bit of variety 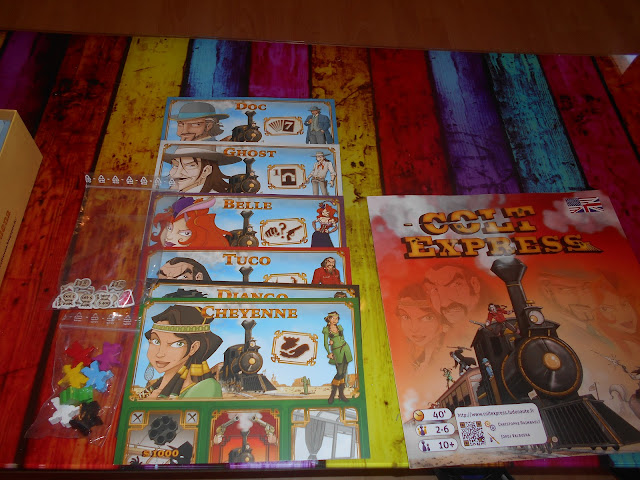 The art is great and characterful with plenty of fun stereotypes of the old west, of course Olivia was happy there where girls in the game! 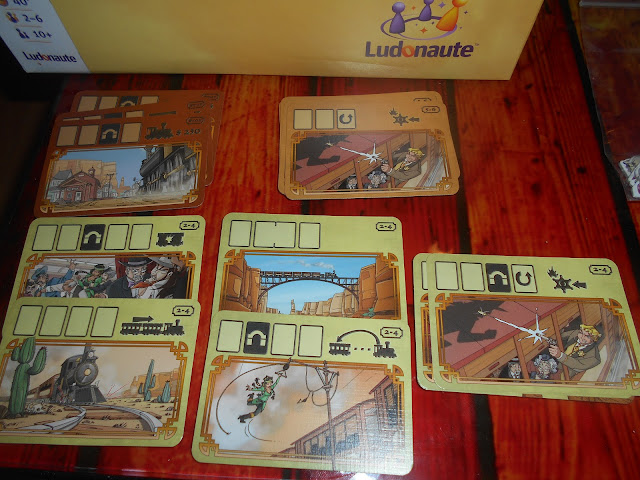 These cards are used for different amounts of players, you draw random ones applicable to the amount of players and it tells you how many actions there are in a round, and also if anything special happens, like the marshall going full guns, or being pushed back.  The tunnel symbol indicates the second round of actions are played face down so your opponents cant see it.

So what's the game about??


On the 11th of July, 1899 at 10 a.m., the Union Pacific Express has left Folsom, New Mexico, with 47 passengers on board. After a few minutes, gunfire and hurrying footsteps on the roof can be heard. Heavily armed bandits have come to rob honest citizens of their wallets and jewels. Will they succeed in stealing the suitcase holding the Nice Valley Coal Company's weekly pay, despite it having been placed under the supervision of Marshal Samuel Ford? Will these bandits hinder one another more than the Marshal since only the richest one of them can come out on top?
In Colt Express, you play a bandit robbing a train at the same time as other bandits, and your goal is to become the richest outlaw of the Old West. The game consists of five rounds, and each round has two phases: 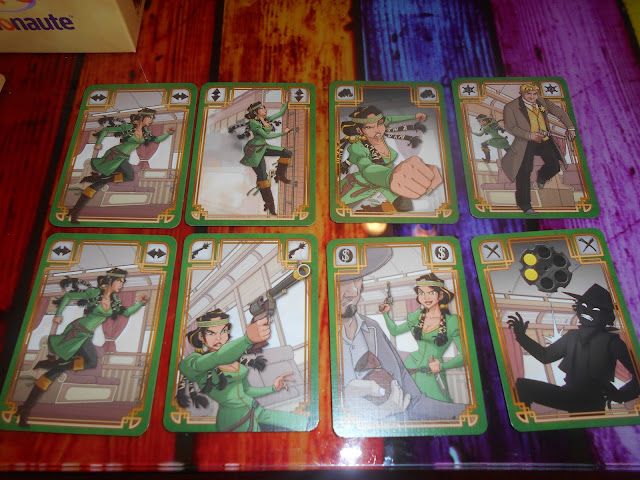 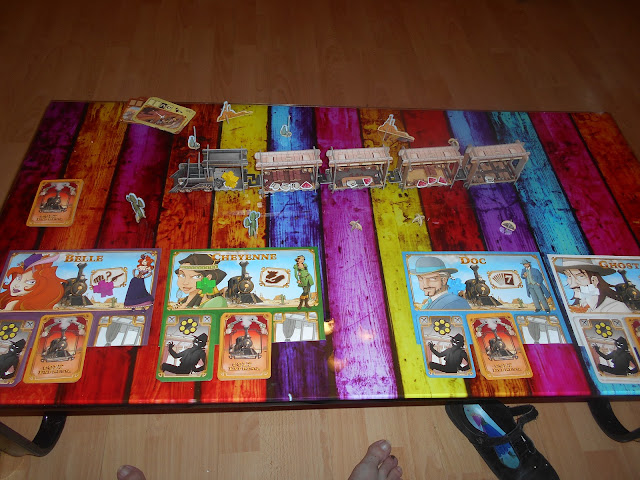 The game takes place in a 3D train in which the bandits can move from one car to another, run on the roof, punch the other bandits, shoot them, rob the passengers, or draw the Marshal out of position. The train has as many cars as the number of players, and each car is seeded with gems, bags of loot or suitcases at the start of play.

Each player starts a round with six cards in hand, with each card showing one of these actions. At the start of a round, a round card is revealed, showing how many cards will be played; whether they'll be played face up or face down, or individually or in pairs; and what action will occur at the end of the round (e.g., all bandits on top of the train move to the engine). You can pick up loot, gems or suitcases only by playing a "steal" card when you're in a train car that holds one of these items — but since everyone is planning to get these goods, you'll need to move, punch and shoot to get others out of your way. You can punch someone only in the same car as you, and when you do, the other bandit drops one of the goods he's collected and is knocked into an adjacent car.

Each player's character has a special power, such as starting the round with an extra card, playing your first card face down, or pocketing a bag of loot when you punch someone instead of letting it hit the ground.
You can shoot someone in an adjacent car or (if you're running on top of the train) anyone in sight, and when you do, you give that player one of your six bullet cards; that card gets shuffled in the opponent's deck, possibly giving her a dead card in hand on a future turn and forcing her to draw instead of playing something. If the Marshal ends up in the same car as you, likely due to other bandits luring him through the train, he'll be happy to give you a bullet, too. 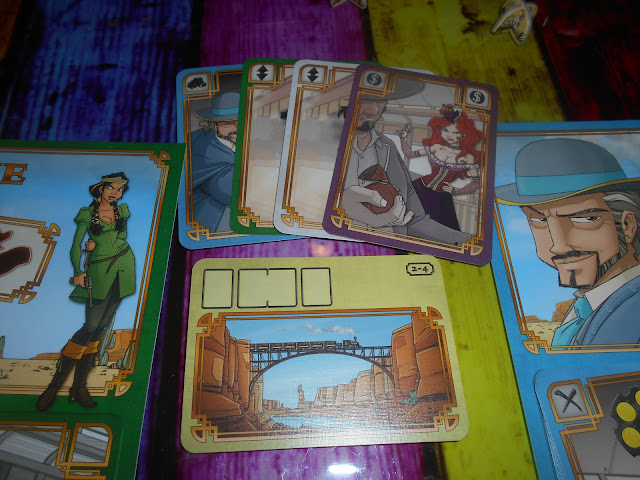 Here you can see how the actions stack as each player plays them, and then when they are all done they are flipped over and acted out. 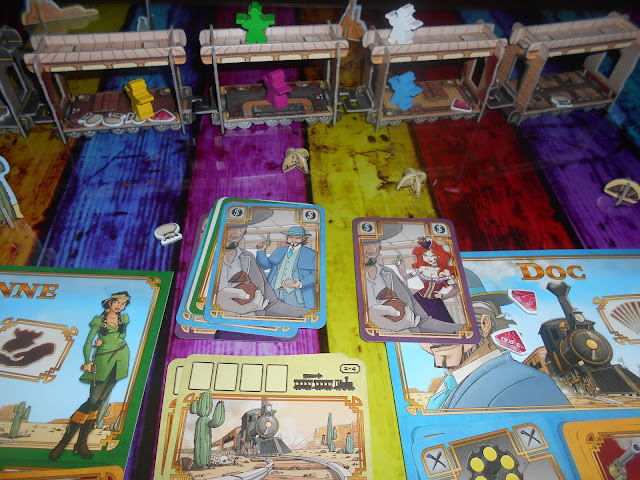 At the end of the game, whoever fired the most bullets receives a $1,000 braggart bonus, and whoever bagged the richest haul wins!

The components are fantastic, just look at the train! 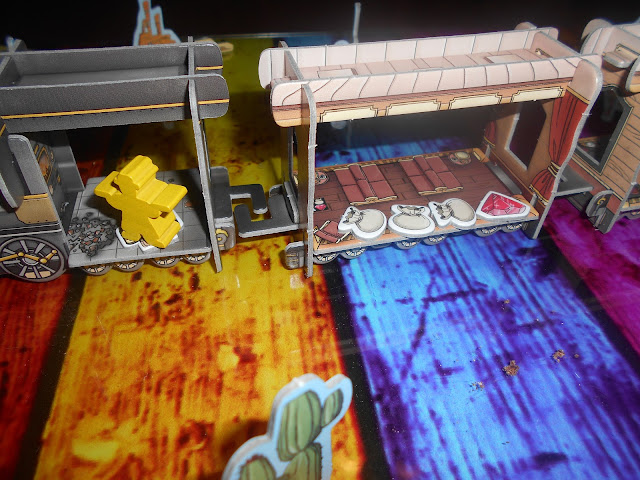 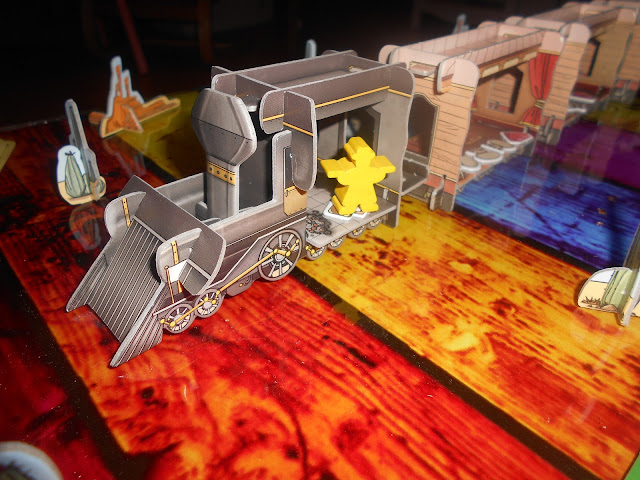 The little bits of scatter scenery, though adding nothing to the game really add to the character and look of it, so its a really nice touch they added them. 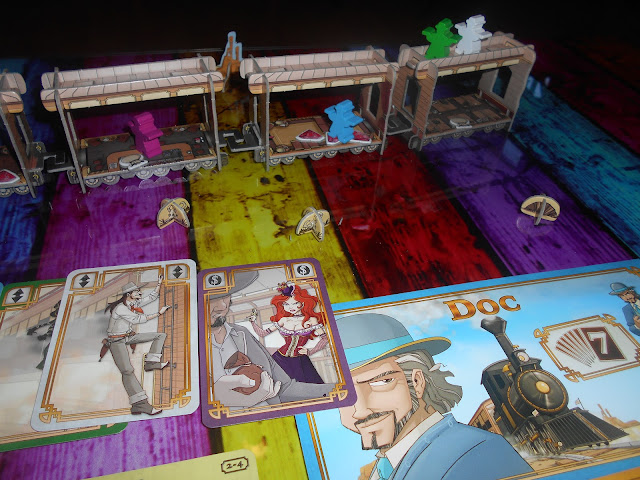 Punching forces the outlaw you punch to drop his loot, shooting adds a bullet token to his deck of cards, meaning when he draws again he may draw a useless bullet limiting his options rob, allows you to pick up a token from the ground, and the move lets you move up and down or left and right.  You can also move the Marshall one space, hopefully into a carriage with other outlaws who he shoots adding a bullet card to their hand and forcing them up onto the roof.

The basics then, you program in a series of movements, and then act them all out, it leads to chaos but great fun, as outlaws clamber around, fire, and punch and steal, but of course, it may not always go your way as things you plan may well be scuppered by your opponents making it all sorts of fun chaos.  Its a simple system to learn, with plenty of tactical nuance in it, as you try to work out what you need to do to get the best results. 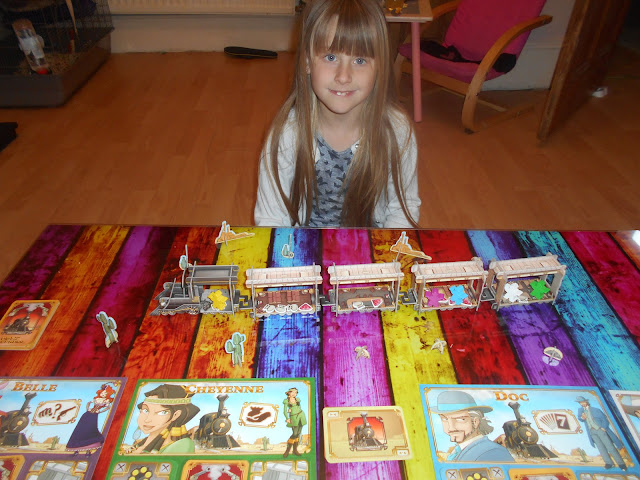 Its really fun, and it looks upper cool, I like being the girls best.  Its so much fun to move my girls around robbing and shooting daddy, and punching him to steal his treasure. Its easy to learn it only took a few turns before I did not have to ask him anything anymore.  I will play this again it was great.

Its a great game, dripping with theme, the rulebook is full colour, with plenty of pictures as examples so you will be playing it in no time, in fact you will spend more time building it then you will learning it.  Its a great game for all ages as all the cards are picture based rather then text based, and yes its certainly all against all, but you will be having so much fun no arguments will happen unlike some games! (monopoly with the wife.... she's hard-core in that)

Now...... something for the geeks, and fans of the 80s, a promo was released for this game with downloadable rules, just for fun really, and its a classic.... 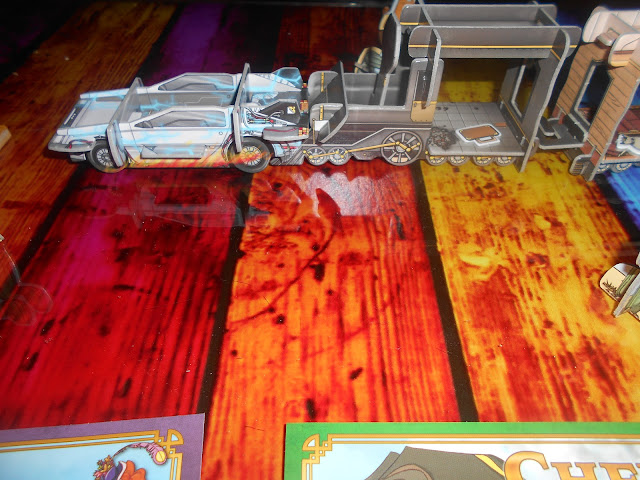 yes..... its the Back to the Future Delorean and I love it!. 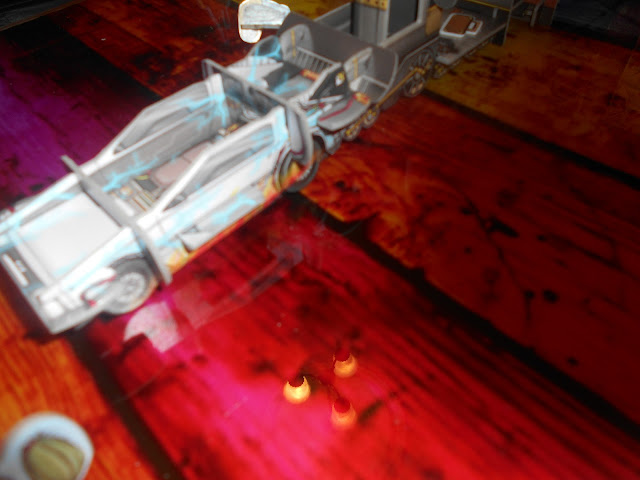 I did feel old when Olivia when said she did not know what it was, so that means a film session is needed before we break it out properly.

A really nice touch is the box itself, which is split up with western artwork on it and fits everything all nicely and neatly and organised so your lovely train and 6 carriages don't get all messed up.

To pick up this great game find your local game store here with an RRP of £27.99 it will provide you and friends and family hours and hours of old west entertainment.