Taking the Black is the first chapter pack in the Westeros cycle for A Game of Thrones the LCG.


As A Song of Ice and Fire begins, King Robert Baratheon rides north to visit his old friend Eddard Stark in Winterfell. Westeros is at peace. But this deceptive calm will not long remain. Already, the seeds of unrest are growing with the ambitions of House Lannister, with the wedding of Daenerys Targaryen to a Dothraki khal, with the apparent murder of the Hand, Jon Arryn. Conflict between the Great Houses looms on the horizon as the high lords and ladies of Westeros begin to play their game of thrones. 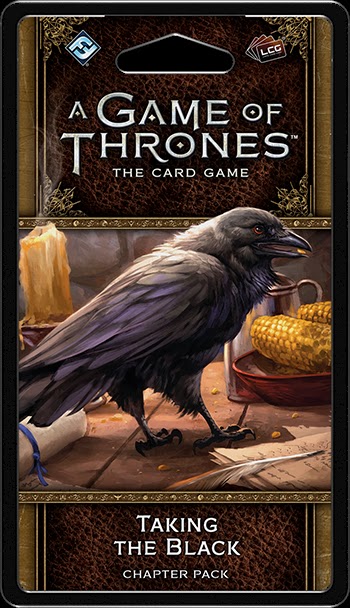 You can take your place at the very beginning of the story with Taking the Black, the first Chapter Pack in the Westeros cycle for A Game of Thrones: The Card Game. As part of the Westeros cycle, Taking the Black explores the first chapters of A Game of Thrones with iconic characters like Renly Baratheon, the Hound, and Maester Luwin entering the game for the first time. In Taking the Black, each faction begins its journey through A Game of Thrones towards the Iron Throne!
The Chapter packs provide you an expansion on the core set of the game.  In this set you get 20 new cards, with 3 copies of each for a total of 60 cards to expand your decks.
Lets take a look and see what you get in this pack.... 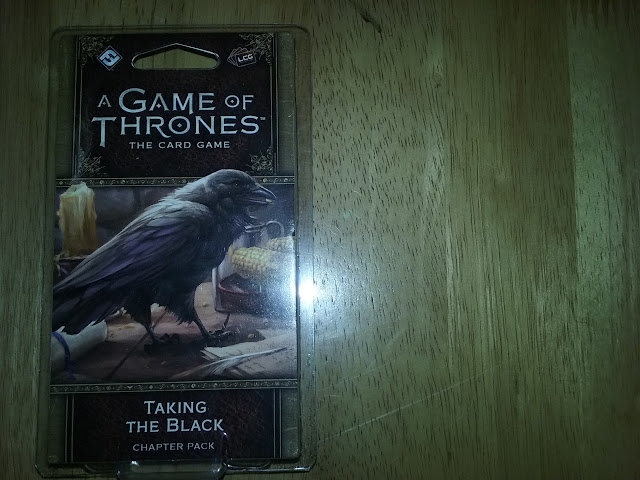 It comes in a nice clamshell pack, with some lovely art. 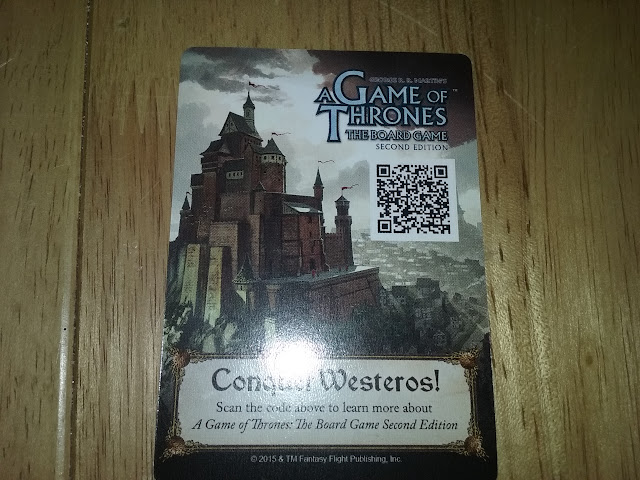 You get a little card inside you can scan to learn more about the game. 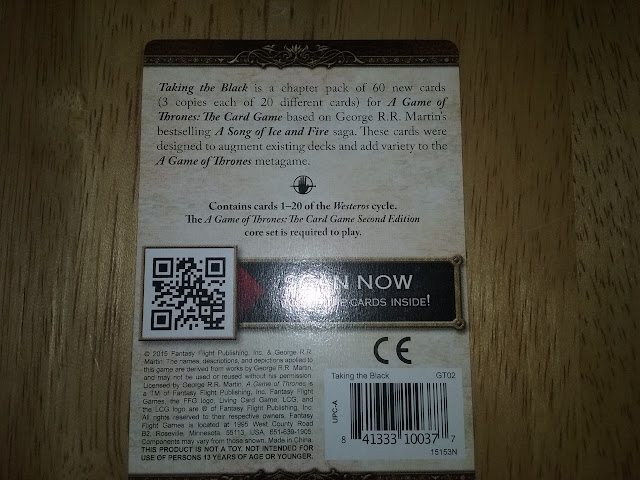 This is the card that is showing on the rear of the pack, it gives you a mini overview of what is in there, and has an excellent feature, where you can scan the QR code to see a list of the contents. 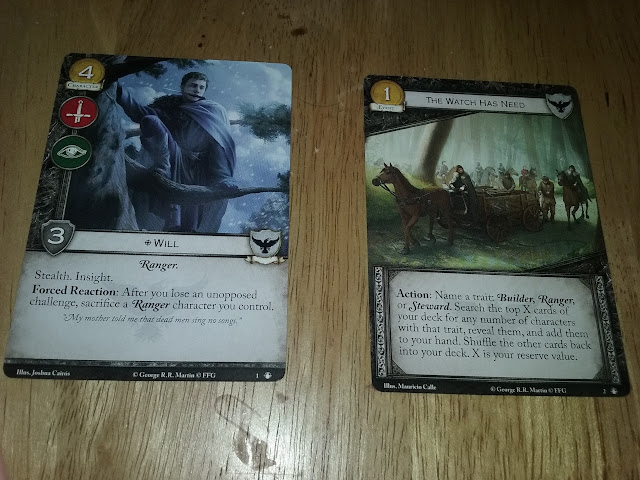 Starting with the Nights Watch we have Will.  He has the Ranger trait, and is a 4 cost 3 strength card with military and intrigue icons.  He also has stealth so he can pick an opposing character without stealth in a challenge that may not block him, its good to stop the big scary Tywins and such like just shutting you down.  He also has insight, so each time he wins a challenge you draw a card.  He is a powerful card, but does have a balancing drawback.  When you lose an unopposed challenge you must sacrifice a Ranger trait character you control.  The Watch has need is a 1 cost event, that allows you to name a trait, Ranger, Steward or builder, then search the top X number of your decks and add all the cards with the chosen trait to your hand. X is the reserve value of your current plot, so played at the right time this can really help stock your hand up with characters. 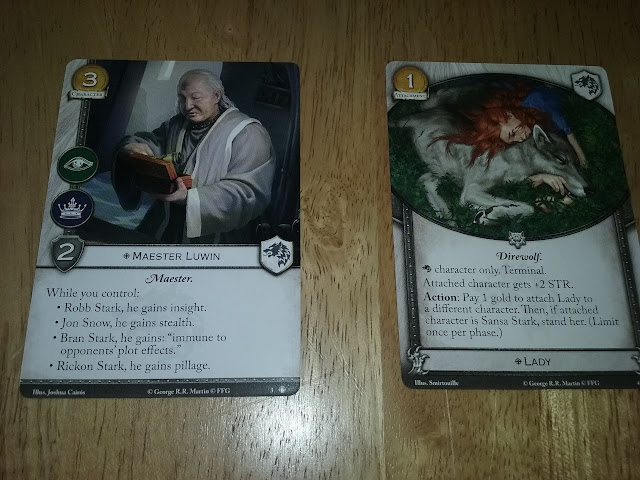 House Stark gets Maester Luwin. He is 3 cost and 2 strength with intrigue and power icons.  His ability though lets you power up other Stark Characters, so he is an excellent card to boost other characters.  Lady is 1 cost attachement with just beautiful artwork.  Its a direwolf, and can only be attached to a Stark character.  She gives that character  +2 strength.  As an action though you can pay a gold to move Lady to another character, and if its Sansa you can then stand her.  Its a very useful card to boost challenges if you need to or a surprise, or just stand Sansa to defend for challenges. 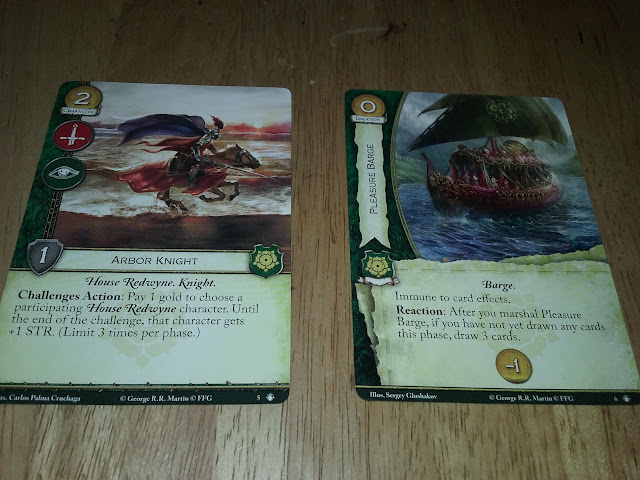 House Tyrell gets its own amazing piece of art with the Arbor Knight, the colours in it are spectacular. It is a 2 cost, strength 1 card, with military and Intrigue icons.  During challenges you pay a gold to choose a participating character with the House Redwyne trait, that gets plus 1 strength.  You can do that 3 times per phase. You can use it to buff the Arbor knight itself, or add it to the challenge a buff another character.  The Pleasure Barge is a 0 cost location that is immune to card effects.  After you have Marshalled the Pleasure Barge, if you have not drawn any cards yet this phase, you may draw 3.  This can be very useful to try and get what you need into your hand, but the downside is you are then on a permanent -1 gold. 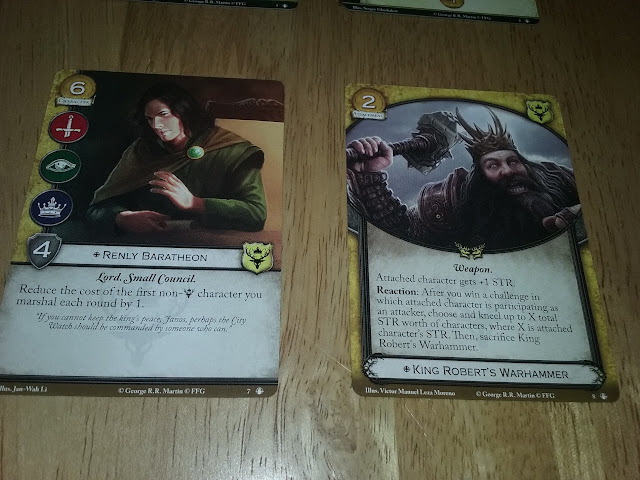 Renly makes his first appearance for House Baratheon.  He is cost 6, and strength 4 with all 3 icons, and he reduces the cost of the first non Baratheon card by 1 each turn.  He is great to play in a dual faction deck.  King Roberts Warhammer is a 2 cost attachment, that provides you + 1 strength.  It has the reaction that after you win a challenge in which the attached character is participating, choose and kneel up to X strength worth of characters where X is the attached characters strength then sacrifice the hammer.   This on a powerful card like King Robert can shut down your opponents cards letting you get in more unopposed challenges, as it lets you pick the characters knelt, so you can stop their heavy hitters, or tie up all their chaff 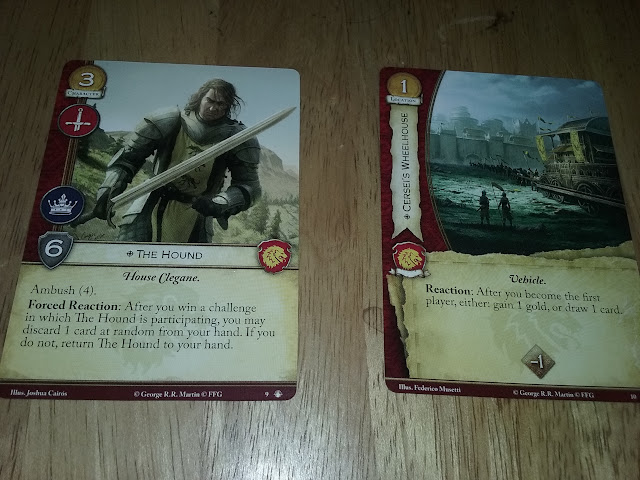 Onto my favourite house, the Lannisters.  And also one of my favourite characters in the books, and show.  The Hound.  He is cost 3, but strength 6 with the Military and power icons.  For his cost he is hugely powerful, and he also has an ambush of 4 so can really turn those challenges.  He does have a downside though, after you win a challenge in which he is involve, you may discard a card at random from your hand, or the hound will return back to your hand.  I would be more then willing to have him bounce back to my hand each turn, as with Lannister, there are plenty of ways to get the gold rolling in.  Cersei's Wheelhouse is a 1 cost location.  After you become the first player you may either draw a card, or gain an extra gold.  The card also gives you a minus 1 to your initiative.  This card is a tricky one, it gives you a bonus for going first, but by dropping your initiative makes it harder at the same time.  However it will very likely make your opponent think twice about making you go first, which means you can react, as if they let you go first you get the bonus effects of the  card.  Very useful. 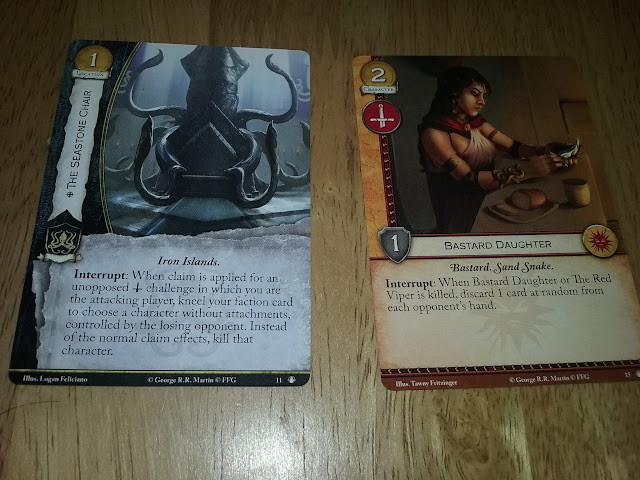 House Greyjoy gets a 1 gold location, the Seastone Chair.  It has an interrupt ability, that when claim is applied for an unopposed military challenge in which you where the attacker, you can kneel your faction card and pick a character without attachments and kill them instead of applying the normal claim.  This is brutally powerful, you can assassinate characters, and it will force your opponent to through things out or keep them back to stop you.  Bastard Daughter represents house Martell in this pack.  Being non unique you can play multiples of her.  She is a cost 2 strength 1 card with military challenge icon only.  When herself, or the red viper is killed your opponent must discard a card at random from their hand.  This Is a solid ability as it forces your opponent to think about if they want to lose a card, or waste a card to block her.  You can even of course sacrifice her yourself as claim in a challenge to strip your opponents cards. 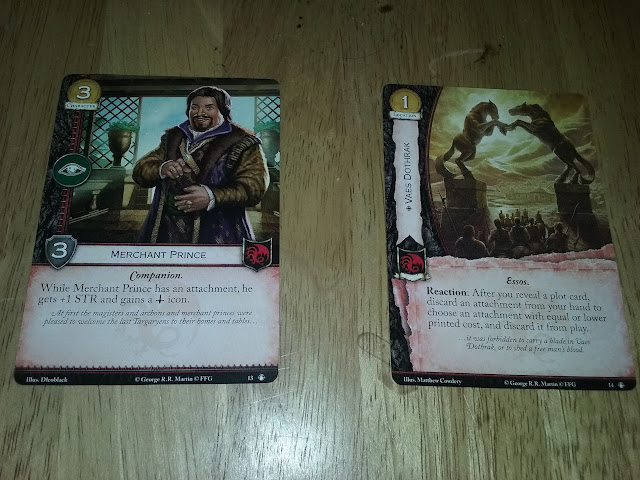 House Targaryen get the Merchant Prince as a 3 cost, 3 strength card with the intrigue icon.  If he has an attachment he gains + 1 strength and the military challenge icon.  Vaes Dothrak is a 1 cost location with a reaction.  After you reveal a plot card, you may discard an attachment from your hand to choose an attachment with equal or lower cost in play and discard it.  Useful for clearing off some unpleasant attachments on your own characters, or getting rid of some scary ones on your opponents. 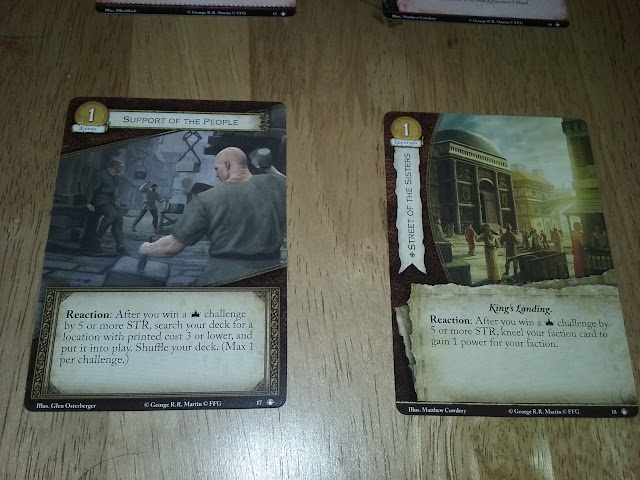 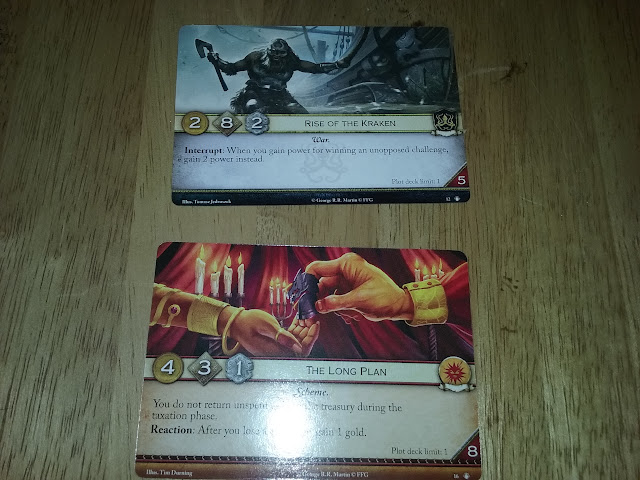 Next we have the plots, firstly Rise of the Kraken, which is a house Greyjoy only plot.  The first time we have seen this sort of thing.  Its a 2 gold, 8 initiative 2 claim plot with a reserve of 5.  With a high claim value, and high I you should be going first, and it lets you gain an extra power when you do an unopposed challenge.  This plot can really wrack up power fast, an unopposed power challenge will take 2 power from your opponent as claim, and 2 for unopposed causing a massive swing.  With a claim of 2 though it makes all challenges very dangerous.

The Long Plan is a Martell only plot with 4 gold, 3 initiative and 1 claim, but it does have a high reserve of 8.  When this plot is out you do not return unspent gold during the taxation phase, so if you can stock up you can carry it over for a big marshalling phase next turn. 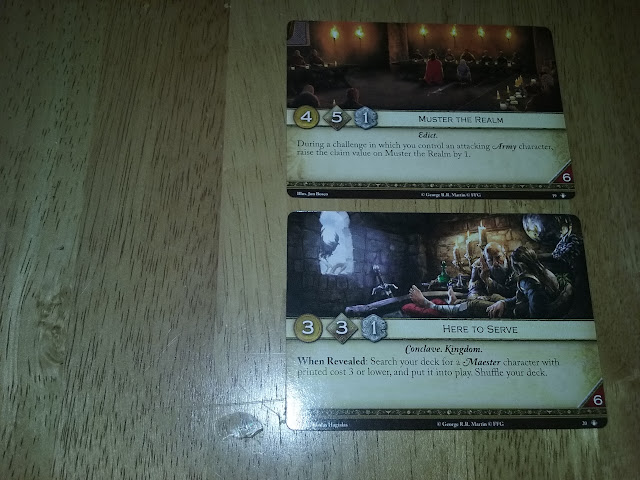 Muster the Realm is a 4 gold, 5 initiative 1 claim plot with a reserve of 6.  When you control a card with he Army trait you get to raise your claim value by 1, making it potentially very effective when played at the right time.

Here to Serve is a 3G 3I 1C with a 6 reserve.  When this plot is revealed you may search your deck for a Maester character with cost 3 or less and put them into play.  ITs a great plot to get a card out for free when you need it.

This is a great pack, I am glad you get 3 of every card to add more variety to the core box, I cant wait to reinforce my decks and test them out.
You can pick up your own Taking the Black chapter pack to expand your choices with an RRP of £11.99 from your local game store
To learn more about A Game of Thrones the card game second edition take a look here
and check out our other articles with more to follow.