Time for something a little different to the norm today.  Star Monsters.  These are some funky little collectable hard plastic space creatures at pocket money prices, suitable for the younglings in the family (or the older ones if you really want). learn more about your Star Monsters here 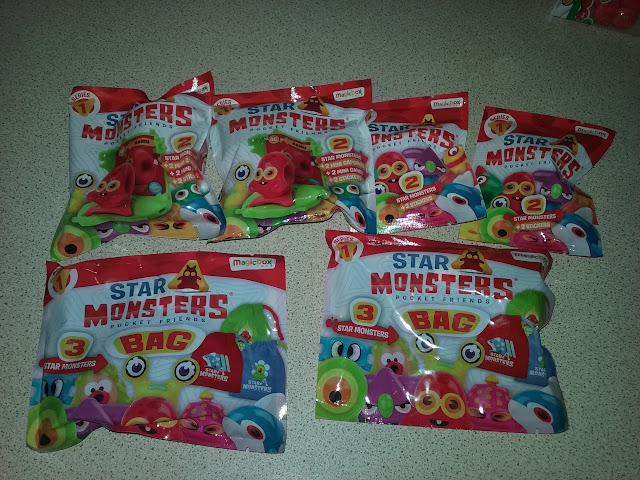 So I thought Olivia should take a look at these, as an experienced fan of collectables such as Shopkins and so on.  We are looking at a mix of packs, just to give you an idea of what you can get out there. 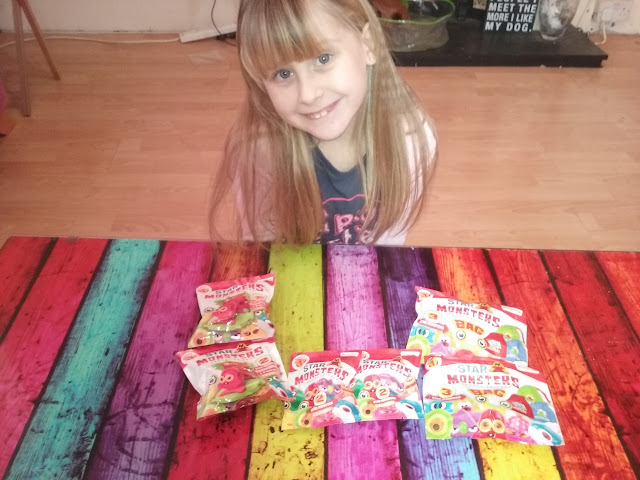 
Triangular stars fall from the sky, this is the origin of Star Monsters. Quirky and funny characters, unlike anything that you have ever seen. Each and every one is here to play! Discover them all! Star Monsters guarantee fun! 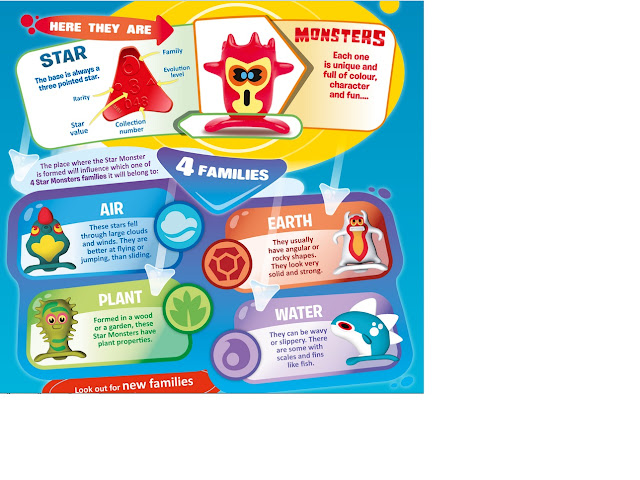 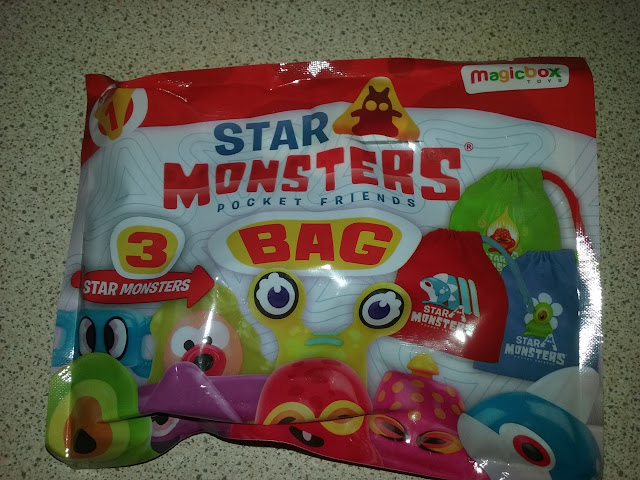 Starting with the Star Monsters Bag pack.  This has an RRP of £2.50 so is pocket money friendly. 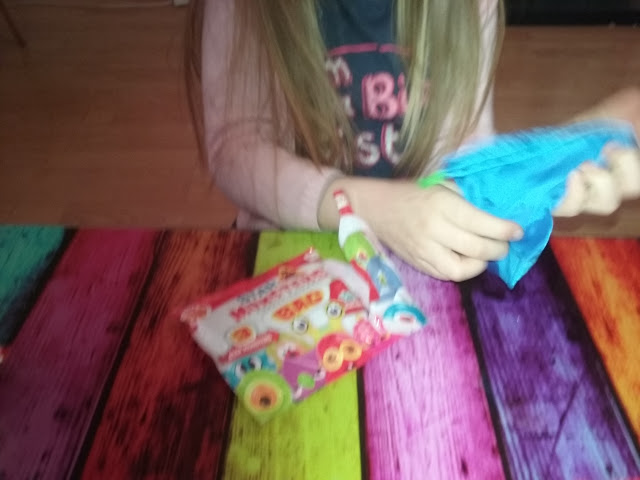 It was hard to get Olivia to slow down enough to get pictures, as she was very excited to take a look at these. 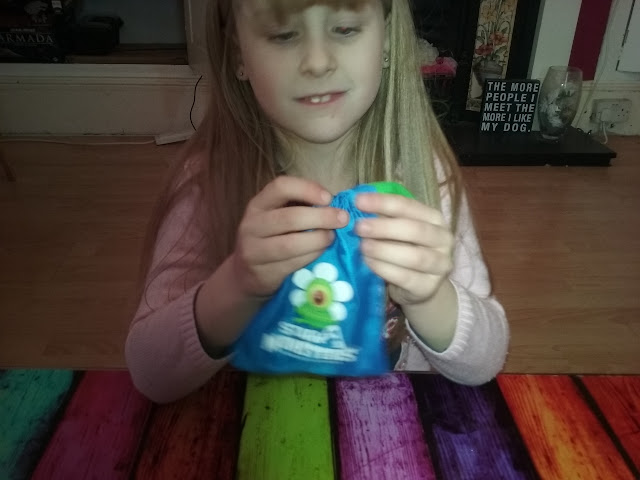 She was pleased the bag they come in is nice, and has drawstring top that "I can tie up to keep them all safe" 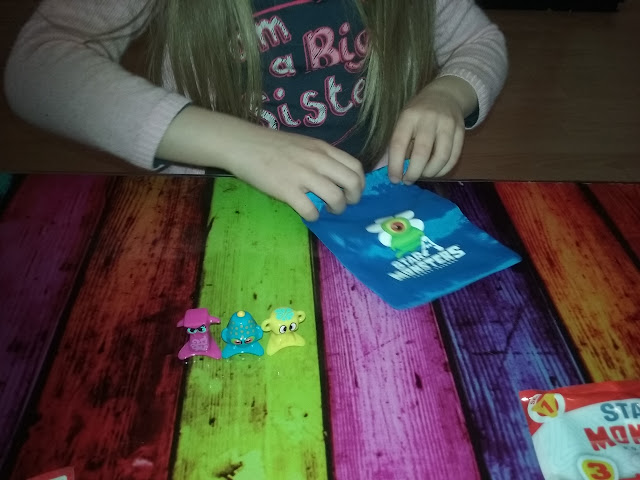 In the Bag pack, you get one very nice quality bag, and 3 hard plastic Star monsters. 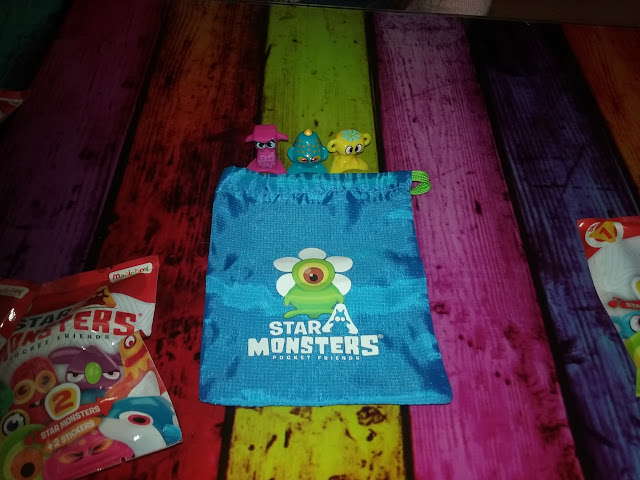 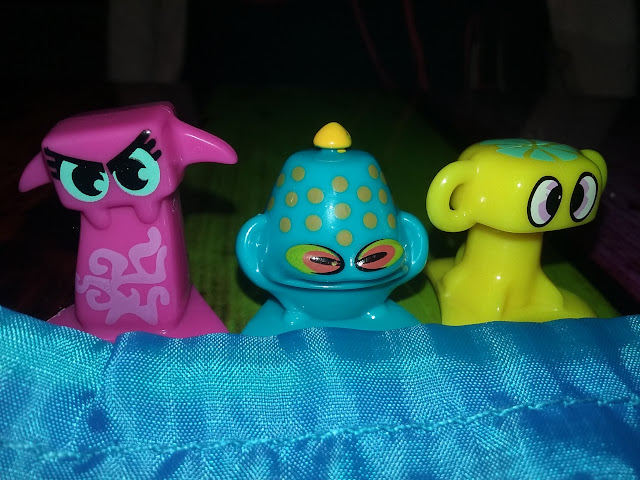 The models are very bright and characterful.  Olivia said the pink one is angry as she was the last out of the pack.

The bag pack is a good buy, as it gives you a nice storage pack for your Star Monsters as well as the monsters themselves. 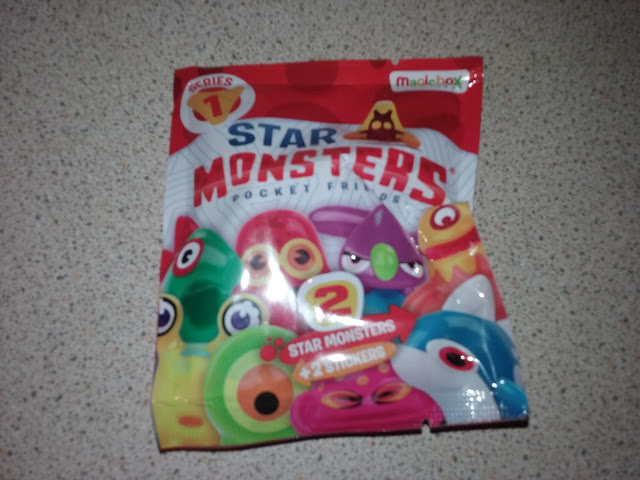 Next we have the 2 pack.  This has an RRP of £1, so very much in pocket money levels, and cheaper and more useful then a pack of sweets a lot of the time. 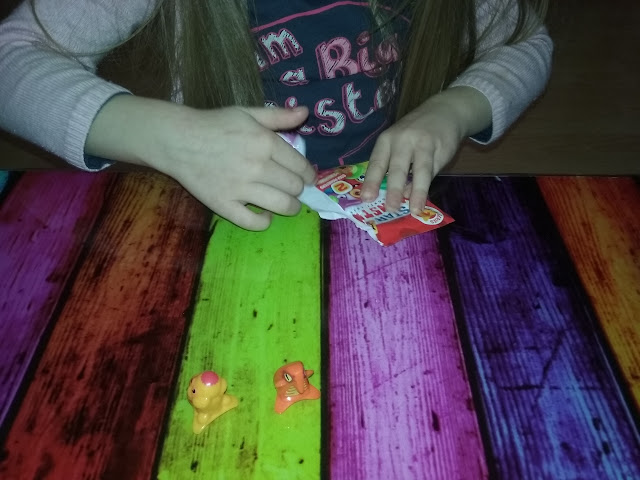 Inside here, you get 2 random Star Monsters, and a set of Stickers, though the stickers may vary from your Star Monster. They are all very different in styles, but all feel solid.  These will not break easily. 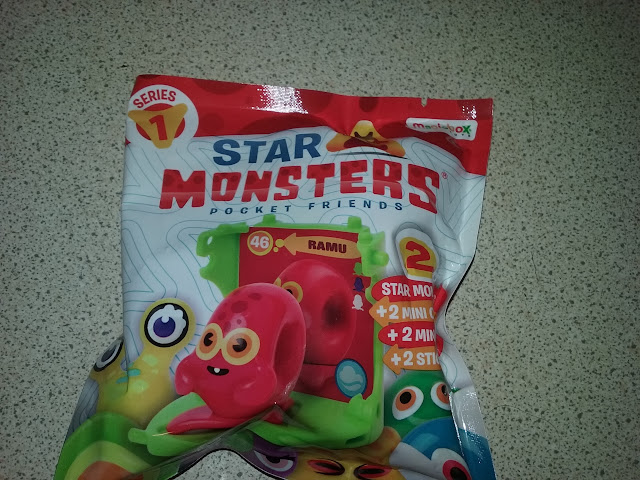 Lastly we look at the Capsule pack.  This has an RRP of £2 keeping the whole range at  pocket money level 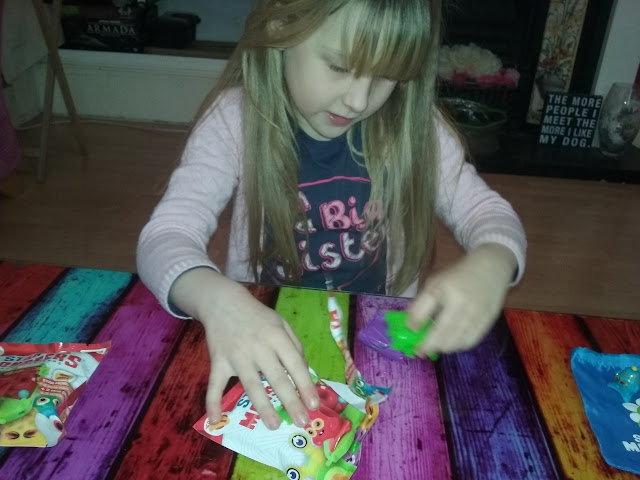 Inside this pack you get a pair of Star Monsters, a pair of stickers, and a pair of Capsules. 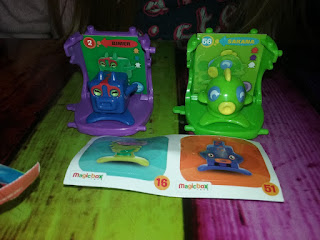 The capsules open and close, and have a card backing with the name and some details of your Star Monster on. 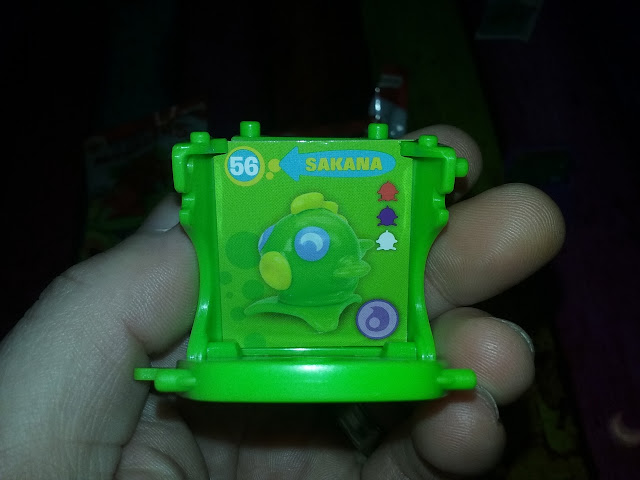 This one is called Sakana.  These can close down, or open up, and have indentations for your Star Monster to sit in nicely to be displayed. 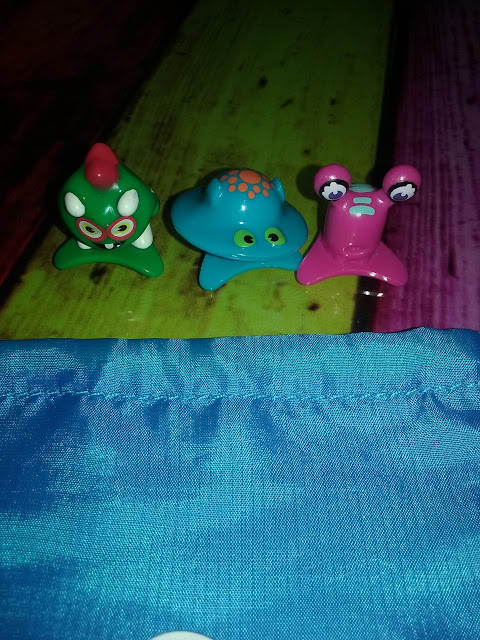 Some other Star monsters you can get.  I love the Variety of them. 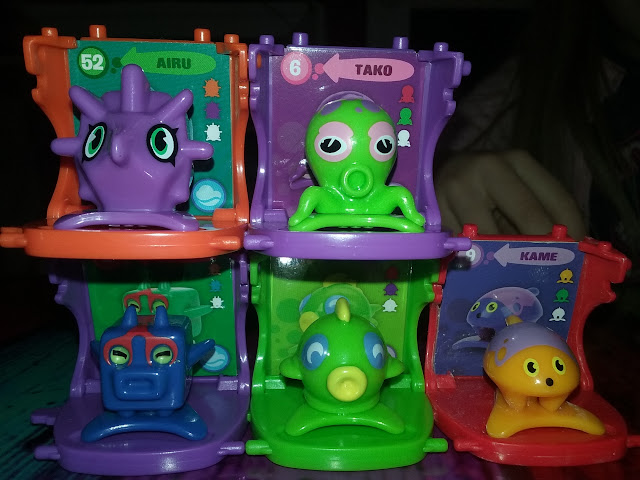 The capsules can stack and click together so they wont fall out, which gives a really nice display. 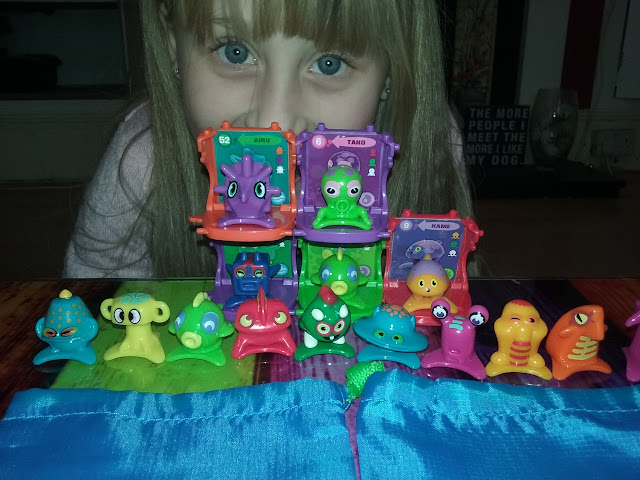 Olivia's Star Monster collection is growing, and with the bags and capsules it encourages her to keep them nice and together.

There is information on the base of the Star Monsters too if you look...... 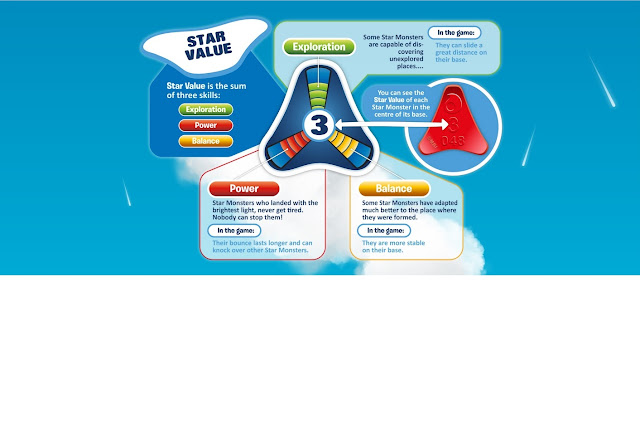 In game values.... yes there are games you can play with your Star Monsters.  Take a look here for some of them here

We played a version of lining them up and flicking them so they slide to knock over the other sides Star Monsters.  As your collection goes you can do "families" against each other, such as water versus air, and so on, or just mix and match as you want. With Each Star Monster having a different shape, knocking them over can be tricky sometimes, but that's the challenge of the game.  There are plenty of other games to play, and that of course does not just include the general imagination of the young! 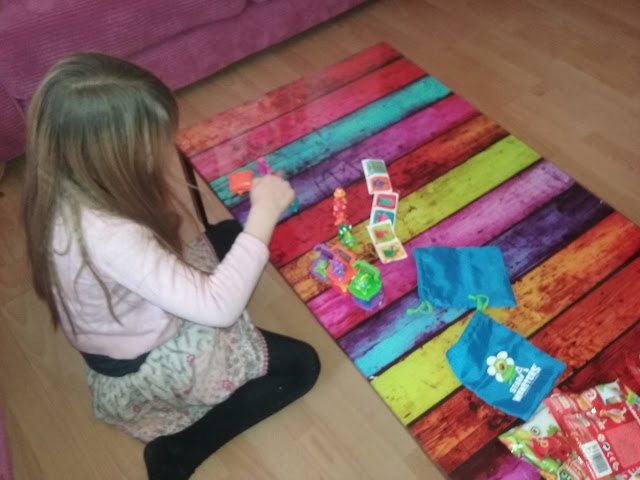 Once she had finished they all put into the bags and carried off, and brought out again, and again for her to play with, and set up all orts of games. 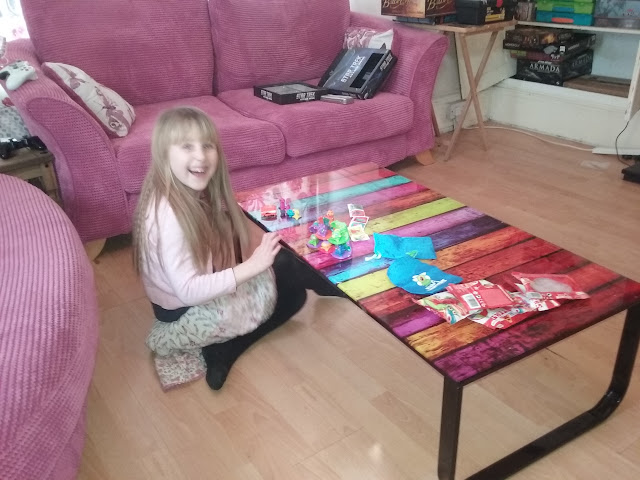 I asked Olivia what she thought of them, she said " I Love Star Monsters, I cant stop thinking about them"  She likes the colours and designs of them, and the games to play as well.  She thinks everyone will enjoy them.  She loves the capsules that stack as she puts them on her bedroom shelf, and now plans to expand to collect all the Star Monsters.  Quite an objective.  I asked her what if she got doubles as you often can in these blind bag collectables.  She stopped and thought for a bit, then said, that's ok as I can still use them in the games to play with them.

In my role as Dad, what do I think? well I like the fact they wont break easily, and are big enough and solid enough to avoid the vacuum cleaner.  I like anything that engages her imagination, seeing her play with them making up stories, and doing drawings of them is a great thing.  The fact they unlike most other collectables have a series of games they can be used for as well is an excellent thing I approve of, and am happy to get involved in them, even though she has and can play them by herself.

Star Monsters are available from a number of national retailers, so go grab some for your little ones, there's a whole load of fun to be had for them.
Labels: family games Star Monsters