One month, and one week later than originally planned, the Ridend are all finished. I had hoped to finish them last week, but real life and an unwillingness to take shortcuts got in the way.

Still going from a pile of bits to a full army in four weeks is quite a step up for me, especially after nearly two year of painting a maximum 8 models from the same army or faction at a time. Heck, most of the time there were 3-4 random models in the hobby corner, between which I'd hop on a whim. So these models were a bit of a learning experience, with some throwbacks to my Warhammer 40K hobby days. 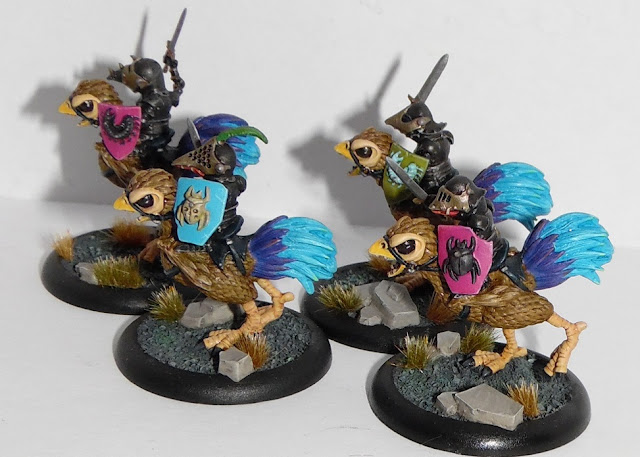 The entire army was very fun to paint and I stayed fairly close to Tor Gaming's studio paintjob (link). The Dragon Tower was definitely the most fun to paint up, there's just a ton of texture and detail all over the model. The fur and feathers on both the Dragon and Kapolop mounts were a blast to paint up and these units really give the army a lot more character. 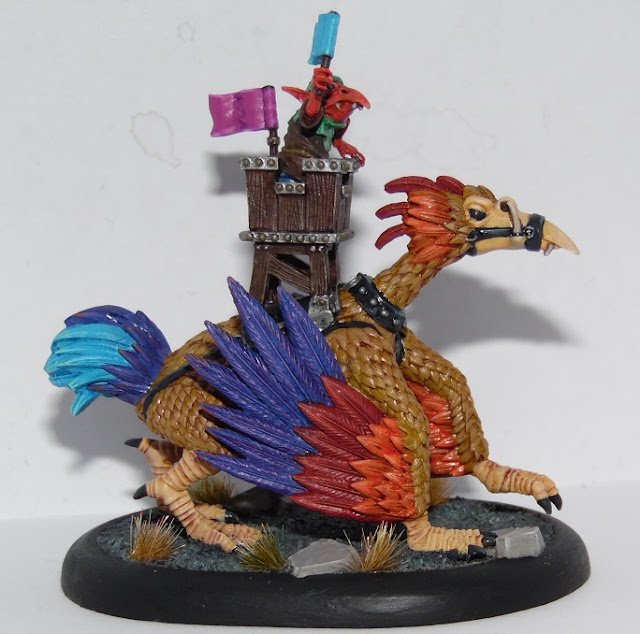 The Tower is also a rather cool model on the tabletop, where its role is synergistic, rather than combat-oriented. Though I am certain we'll eventually see a more fighty version take to the field, in addition to other goodies 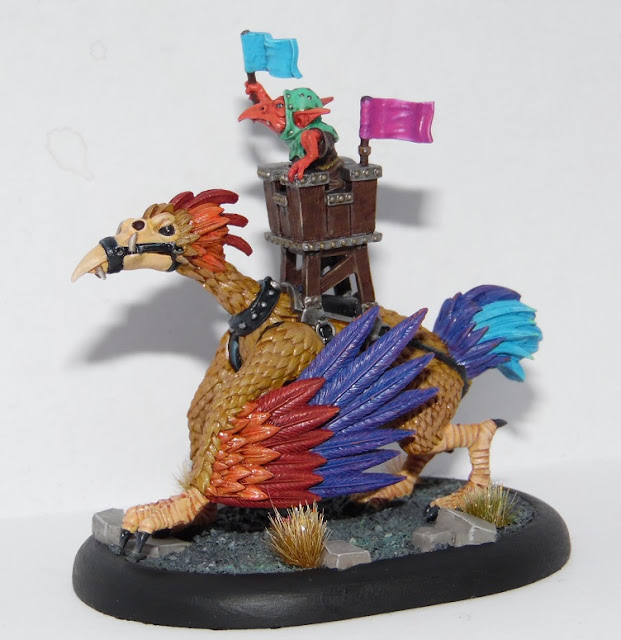 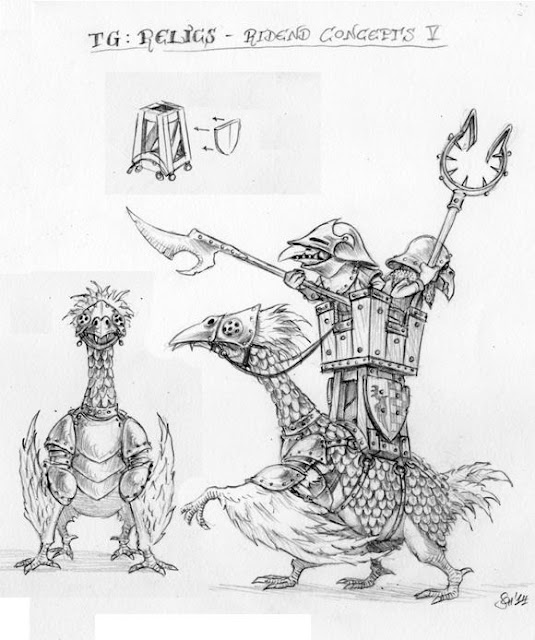 Most of all I am rather happy I took the few extra evenings of tinkering. Feel it really paid off to create a force that both has a bit of a brooding side with the dark armor plating, yet also a rather bright side in the mounts, shields and cloth. And well, all those tiny, tiny details on the archers and knights' shields took much longer than anticipated. So many metal studs, armor rivets and clothing layers. 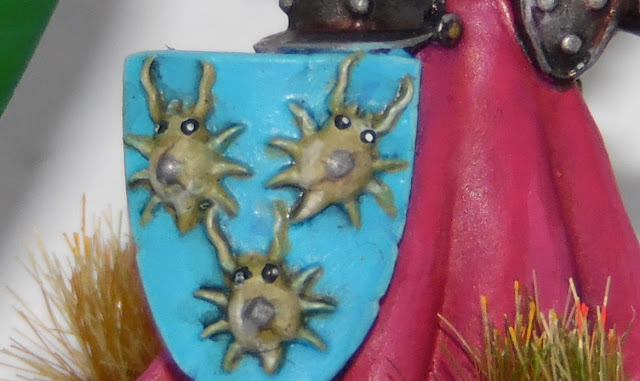 My favorite unit of the army have to be the Ladies of the Court though, these gals just ooze character. Their posing is fantastic, while the actual models had a lot more detail on there than I had expected from the render previews. Think I may have unintentionally snuck some Disney princess colour schemes in there as well.........goes perfectly well with armored goblins riding giant chickens right? 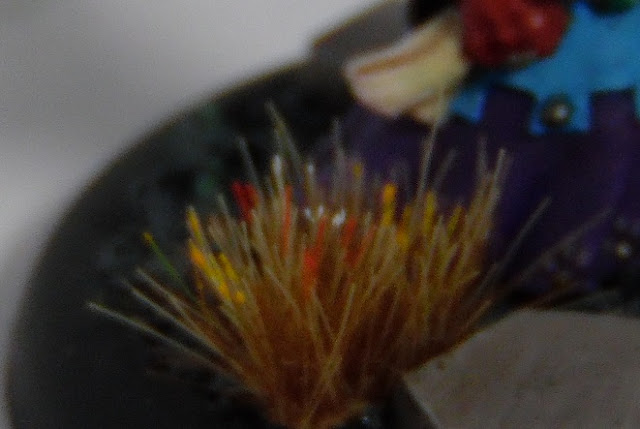 Not having painted such a large, coherent batch of models in quite a while,  I naturally ran into the classic problem of having to go back and forth between models to deal with areas and colours that could have been sorted out in a single go. A bit more planning could have really helped out here.

Not always the most exciting task and progress will look very slow when dealing with larger blocks of the same colour. The rather big upside though is worth it, a coherent foundation across models while still having the room to make each miniature an individual during the detailing phase. For this particular project I tackled the skin and armor for the entire batch, while doing other base colours like leathers or shields when all models that had a particular elements where ready for it.

A little check list, especially when it comes to fine detailing, can really pay off. Both as a way to avoid frustrating 'how the freak did I miss that X'-moments and as a bit of a motivational tool. We do like to check off things, it's almost like a list of mini-achievements. 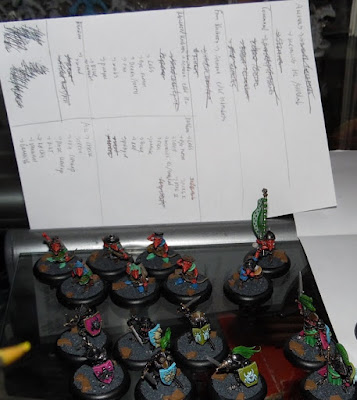 Over the last couple of years I've built up the tendency to mix colours while using a wet palette. Great fun and can lead to some very unique colour schemes, especially when tackling darker schemes. Alucard is a great example of this, with about a dozen differently brown mixed shades on him (great, resin model from Infamy Miniatures - link) 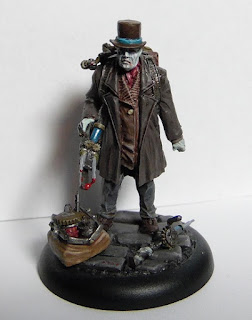 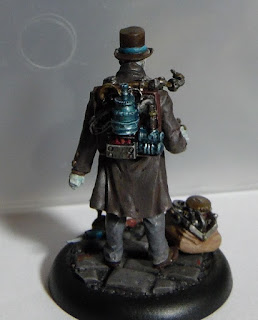 But, it can also lead to you completely loosing track of what went into that cloth basecoat or that distinct skin tone that's now all over your army. Certainly not an issue when you're merely painting models for display purposes or as truly individual models for a warband-level game like Mordheim or Infamy. For a larger force, or when more units are added at a later date, it's a good idea to keep a log book, Also the perfect place to pen down just what and when you painted stuff. 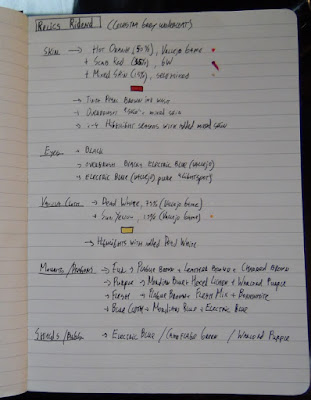 Next week we'll have a better look at what this whole Relics game is actually about, those lovely models have a world to inhabit and rules to play around with after all! 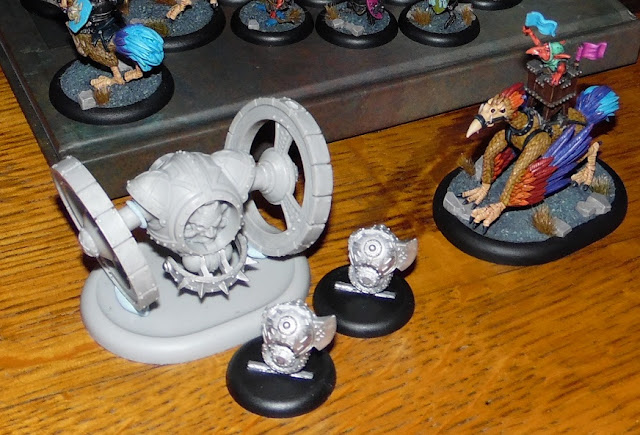 I'm also in the midst of reading through the Wasteman rulebook (from Thunderchild Minaitures ~ link), while assembling the miniatures. This Kickstarter stuff just recently arrived and I'm most happy with the product Jason put together. The miniatures are right up my alley, but there's a whole lot to say for the actual rule set as well. Definitely a product well worth adding to the collection for the post-apocalyptic wargaming fans out there. 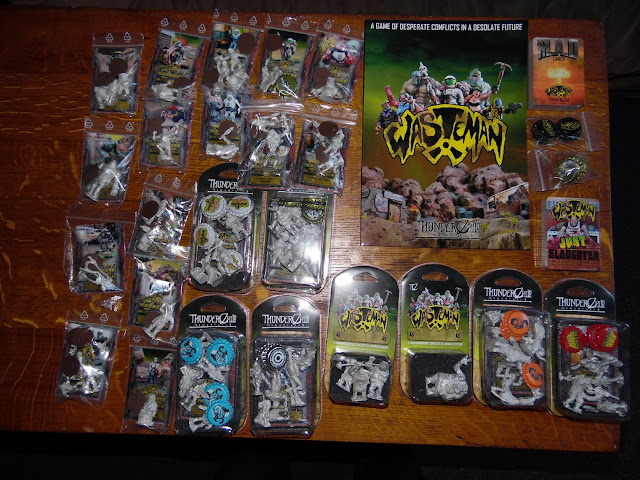 Finally, there's my second big project for 2016. The year I hope to turn into a 'project completion', rather than a 'the pile just got bigger'-year. So both to finally tackle a set of models I've been somewhat intimidated by and to help spread to word about a great setting with an upcoming expansion, I'll be sharing my progress on the Ancients of Atalan. 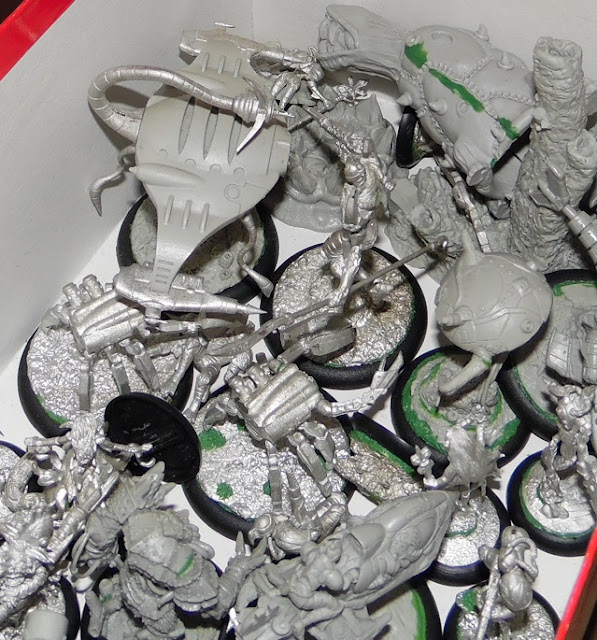 Part of Antimatter Games' (link) underwater DeepWars setting, they are some of the most dynamic and thematically sculpted models I've ever had the pleasure to put on the table. The game, built on a more in-depth variant of A Song of Blades and Heroes, is also quite something special. And lets be honest here, when's the last time you saw an entire game taking place at the bottom of the sea? Luckily there's also a land-based version in ShadowSea, so it will be more than merely eye candy. In fact with the new Song of Blades and Heroes version coming out any day now, we might as well look at the whole lot! 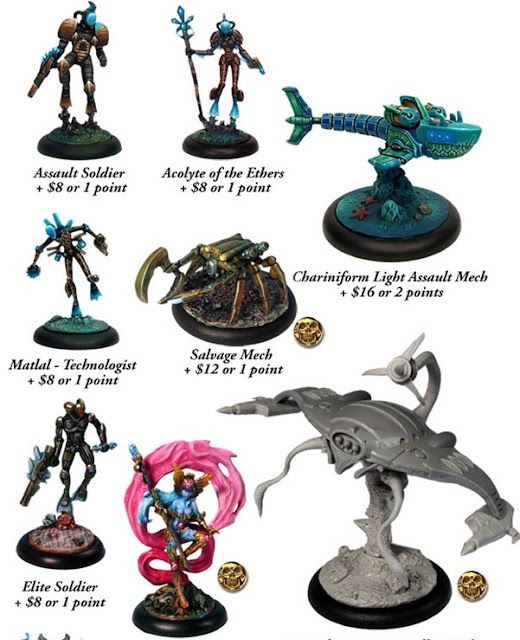