Olivia took command of the Union forces whilst I led the Confederates for another Battle Cry scenario.

The Battle of Wilson's Creek, also known as the Battle of Oak Hills, was the first major battle of the Trans-Mississippi Theater of the American Civil War. Fought on August 10, 1861, near Springfield, Missouri, between Federal forces and the Missouri State Guard, it is sometimes called the "Bull Run of the West." 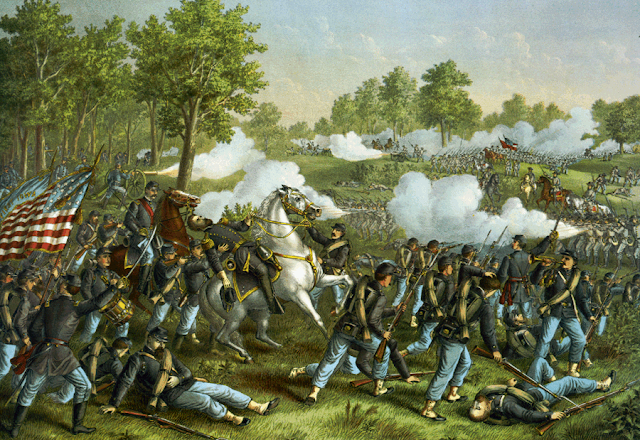 At the beginning of the War, Missouri maintained an officially neutral status. However, its governor, Claiborne Fox Jackson, began to work with the Confederacy to bring Missouri out of the Union by purchasing arms from and fighting alongside Confederate troops. This resulted in his removal by a constitutional convention in July. In early August 1861, Confederates under the command of Brig. Gen. Benjamin McCulloch and Missouri State Guard troops under the command of Maj. Gen. Sterling Price approached Brig. Gen. Nathaniel Lyon's Army of the West, which was camped at Springfield. On August 9, both sides formulated plans to attack the other. 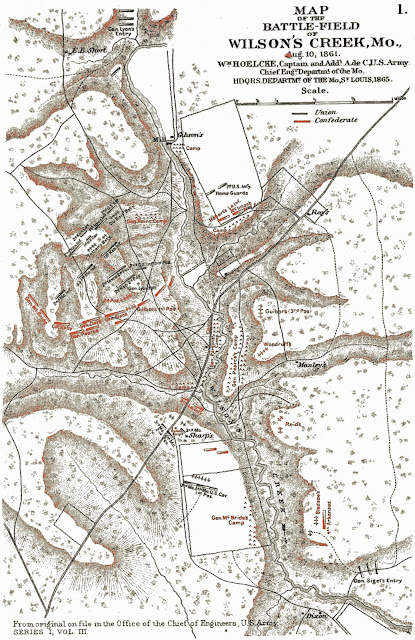 At about 5:00 a.m. on August 10, Lyon, in two columns commanded by himself and Col. Franz Sigel, attacked the Confederates on Wilson's Creek about 12 miles (19 km) southwest of Springfield. Confederate cavalry received the first blow and retreated from the high ground, later referred to as "Bloody Hill," and infantry soon rushed up to stabilize their positions. The Confederates attacked the Union forces three times during the day, but failed to break through the Union line. When General Lyon was killed during the battle and General Thomas William Sweeny wounded, Major Samuel D. Sturgis assumed command of the Union forces. Meanwhile, the Confederates routed Sigel's column south of Skegg's Branch. Following the third Confederate attack, which ended at 11:00 a.m., the Union withdrew. When Sturgis realized that his men were exhausted and lacking ammunition, he ordered a retreat to Springfield. The Confederates were too disorganized and ill-equipped to pursue the retreating Federal forces.

The Confederate victory buoyed Southern sympathizers in Missouri and served as a springboard for a bold thrust north that carried Sterling Price and his Missouri State Guard as far as Lexington. In late October, a convention organized by Jackson met in Neosho and passed out an ordinance of secession. Although the state remained in the Union for the remainder of the war, the Battle of Wilson's Creek effectively gave the Confederates control of southwestern Missouri. Today, the National Park Service operates Wilson's Creek National Battlefield on the site of the original conflict.

The casualties were about equal on both sides – around 1,317 Union and 1,230 Confederate/Missourian/Arkansan soldiers were either killed, wounded, or captured. Though the Confederate force won the field, they were unable to pursue the retreating Union forces to Rolla.

Lets see how things turned out on the table..... 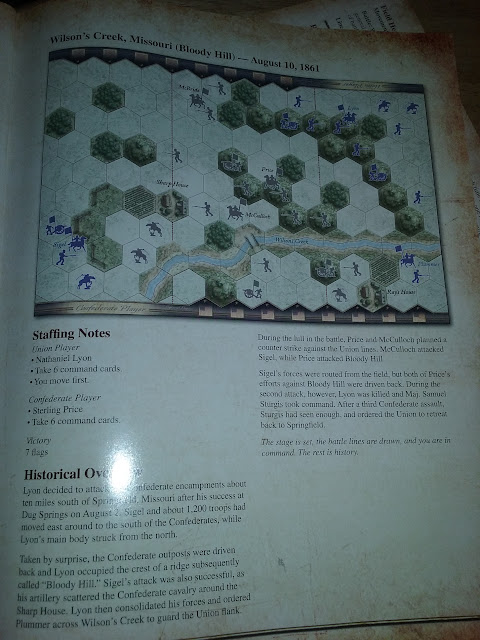 IT is a pretty packed table, with lots of terrain, and lots of units.  Victory is first to 7 flags, 6 cards each and the Union moves first. 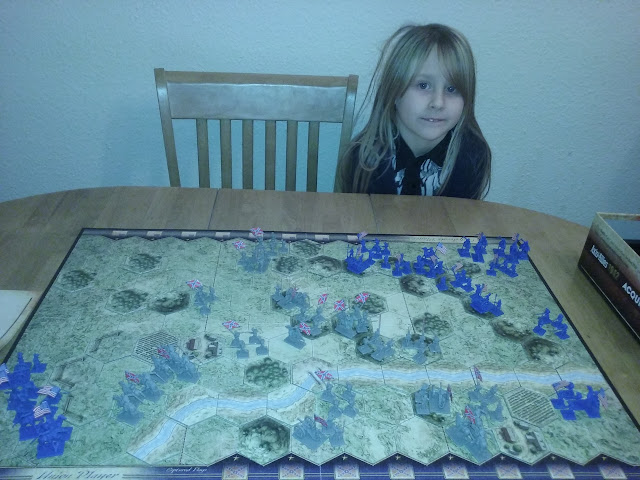 The Confederate forces had more forces in the board, but had union troops on both sides of them. 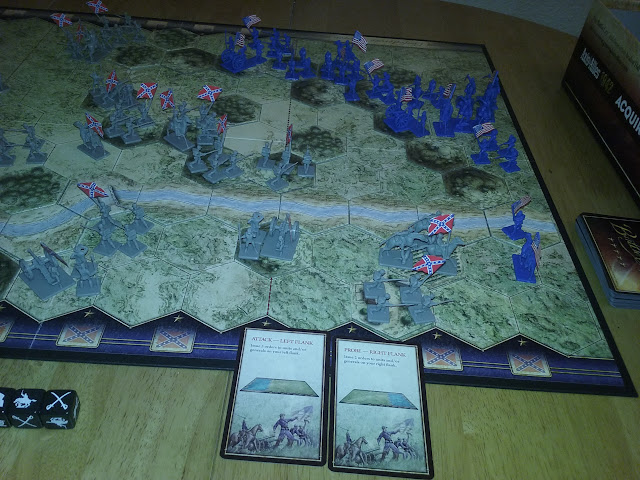 Olivia began the game by an attack in her left flank, moving her cavalry and infantry down into better positions to attack.  I played probe on the right flank, and by the time the infantry had finished firing and the cavalry had charged in the Union infantry unit was left only with the banner bearer.  The board begins with units so close combat can happen from the beginning and with so many targets to choose from. 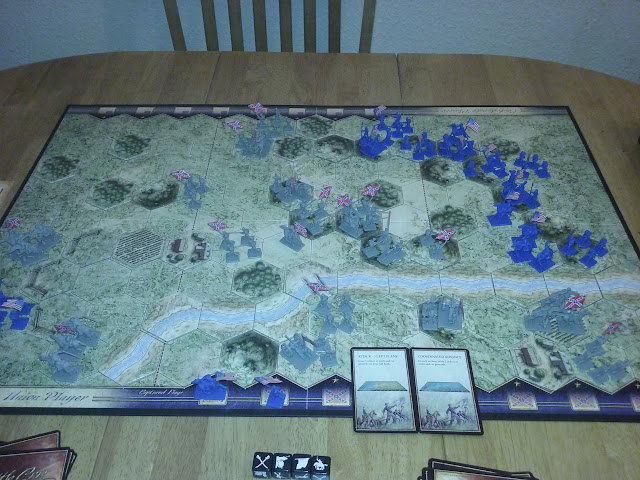 Union forces Attacked on the left flank again, bringing up the cavalry and inflicting casualties on Rebel infantry holding the hills.  The confederates played a coordinated advance sweeping cavalry ready to attack on the left flank, obliterating the battered union infantry company and killing the general for 2 flags on the left, and reducing a union cavalry unit to one stand in the centre. 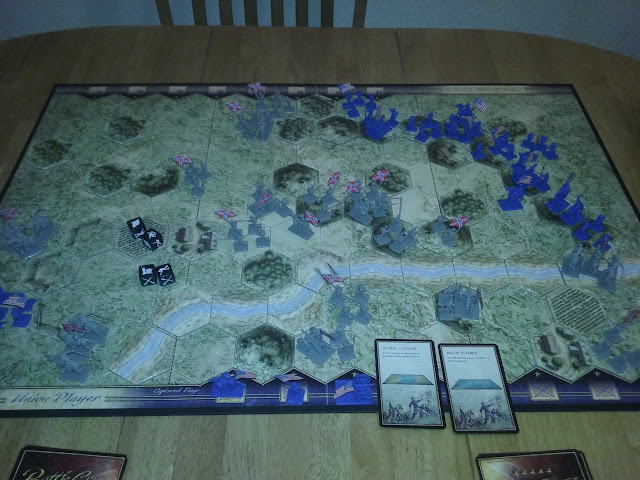 Olivia issued an attack in the centre order pushing back the rebel artillery from the hill, and whittling down the infantry again.  I played a recon in force, and wiped out the artillery on the left flank, and swept my cavalry up on the right to engage. 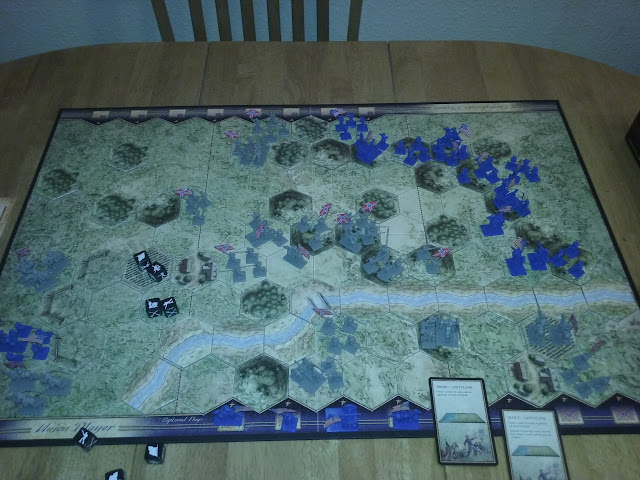 Things where not looking good for the Union loosing 4-0, with their right flank collapsing.  They where solid in the centre and their left though, and that's where they pushed by probing the left flank inflicting casualties on the confederate cavalry and forcing them to retreat.  The confederate forces followed up their attacks on the left flank closing in on the lone infantry unit with general holding out there. 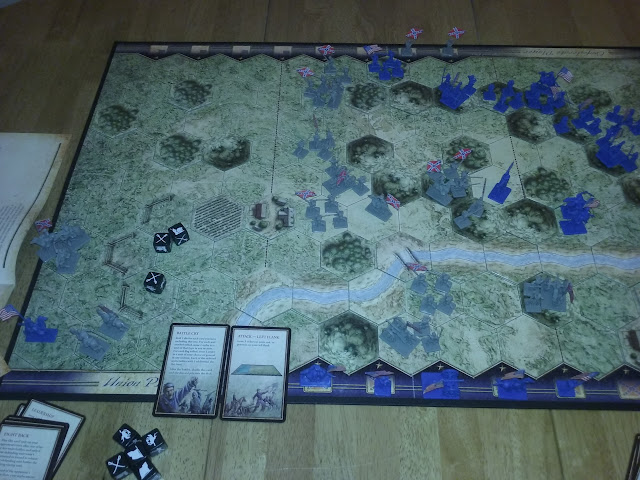 Olivia used this moment to play Battlecry! she rolled her dice and activated 6 units across the whole board (ones that matched the symbols she rolled, flags and sabres let her choose.  On the left she inflicted losses on the confederate cavalry, but not enough....  In the centre she caused loses and shattered 2 confederate units bringing her straight back into the fight.  I played another attack on the left flank, finishing off the infantry unit there leaving this turn with the score of  5-2 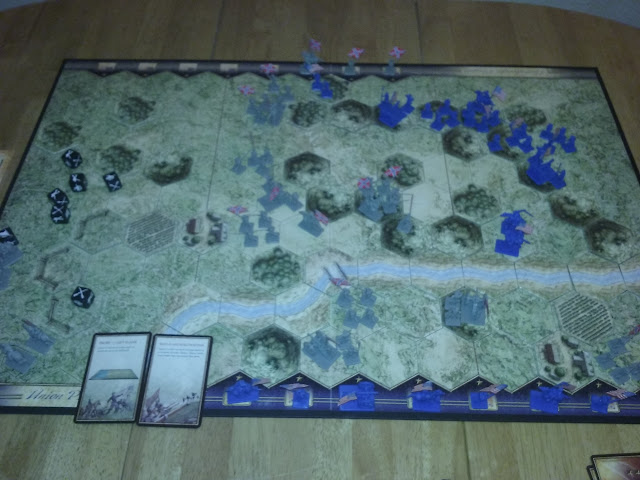 Olivia played an attack on her left flank wiping out a unit of Rebel cavalry bringing the score to 5-3 so getting closer, and with some battered confederate units in the centre another turn or 2 may swing the game around.  It was not to be though, I played battle and hold positions in the centre, and volleyed  finishing off an infantry unit, and the last remaining cavalry standard bearer off the board to gain that final flag for victory.  7-3 victory to the Rebels!


That was a  great game, and closer then the score suggests.  looking at the forces left the Union still has a strong centre and left flank, whilst my centre is weaker.  A few more turns and it could have gone either way.  Its the biggest game we have played so far in terms of units on the board and terrain, and I loved it, it looked great set up like that.

Olivia afterwards said she needs to concentrate her forces more in the same sector, and go after things until they are dead  instead of jumping around to different sectors.  That of course does depend on the cards as she agreed, but she is really looking forward to the next game and determined to bring victory to the Union forces.