In this faction focus we look at House Martell.  We will be looking at their strengths, and weaknesses and some of their best cards.

" 'Unbowed, unbent, unbroken'. The words of House Martell. A promise to our enemies, and a challenge to our lovers."
―Oberyn Martell

House Martell of Sunspear is one of the Great Houses of Westeros. It rules the peninsula of Dorne in the far south of the continent from their castle Sunspear. Though loyal to the Iron Throne, it has pursued a more isolated role in wider political events since Robert's Rebellion.
House Martell's sigil is a red sun pierced by a golden spear, on an orange field, a combination of the original Martell sigil - a yellow spear - and the emblem of Princess Nymeria - a red sun - to symbolize the marriage of the warrior-queen to Mors Martell. The motto of the House is "Unbowed, Unbent, Unbroken" 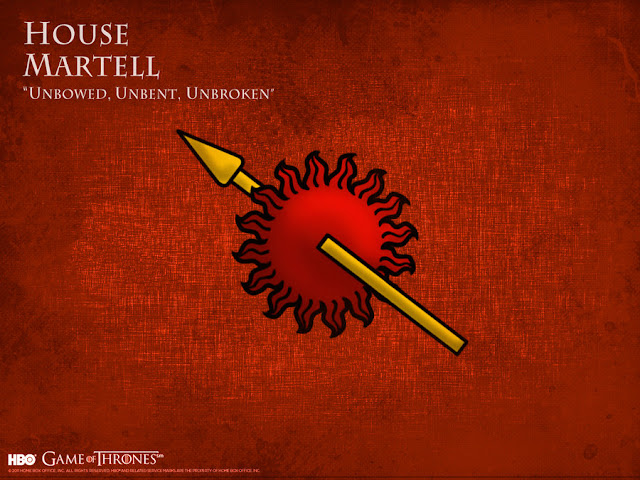 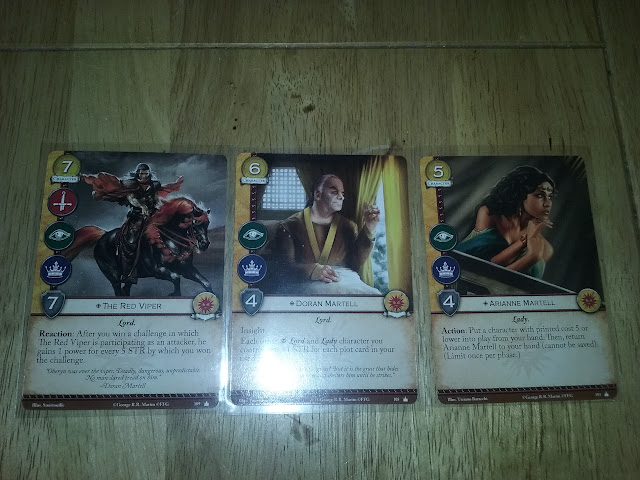 We start with the Red Viper, he is strength 7, cost 7 with all 3 icons, and the reaction that each time you win a challenge in which the Red Viper is participating he gains a power for each 5 str you win by.  Doran Martell is cost 6 strength 4 with intrigue and power icons.  He has insight and the ability that each Martell Lord and lady gain plus 1 strength for each plot in your used plot pile making them brutal later in the game.  Arianne Martell is cost 5, strength 4 with intrigue and power icons.  For her action you can put a character that costs 5 or less into play from your hand, and return Arianne, meaning you can always have the right character out at the right time. 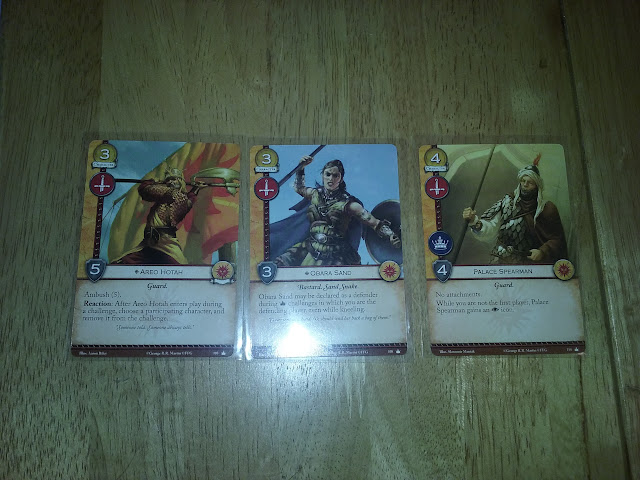 Aero Hotah is a cost 3, strength 5 character with the military challenge icon, he also has ambush 5 as well.  He has a reaction for when he enters play during an ambush in a challenge.  You choose a participating character and remove it from the challenge, potentially letting you get a nice unopposed challenge in.  Obara Sand is a 3 cost 3 strength with military challenge icon, and she can always be declared as a defender in a power challenge even whilst kneeling, making her very versatile.  Palace spearman is a cost 4 strength 4 character with military and power icons, and the ability that whilst you are not the first player he gains an intrigue icon. 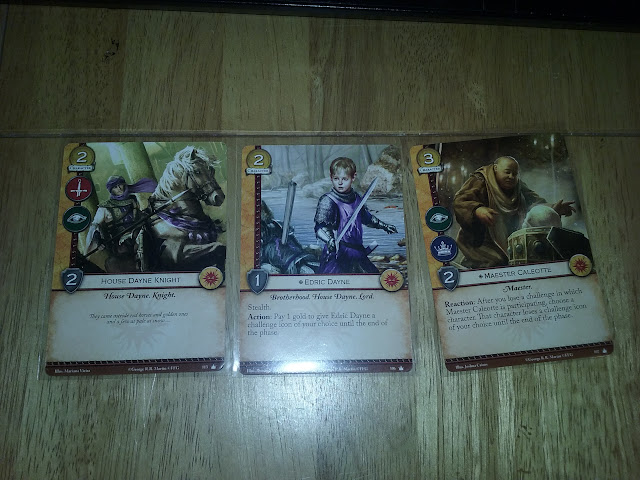 The House Dayne Knight, is cost 2, strength 2 with military and intrigue icons.  Edric Dayne is cost 2 strength 1, with no icons as normal, but you can pay a gold to give him an icon of your choice until the end of turn.  He also has stealth.  Maester Caleotte is cost 3 strength , with intrigue and power icons.  His ability works after you lose a challenge in which he is participating in, choose aq charcter and they lose an icon of your choice. 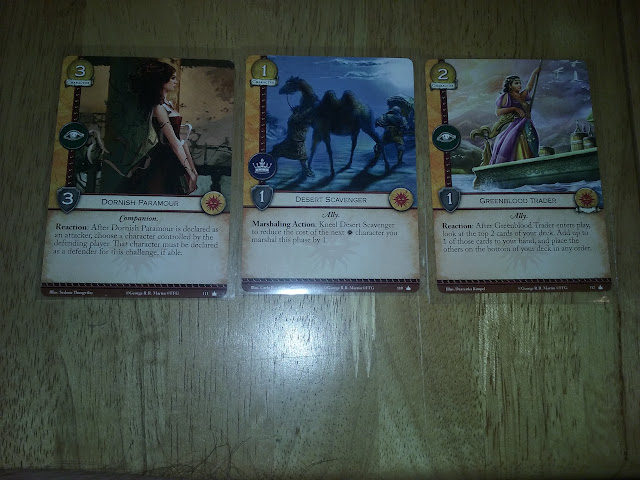 Dornish Paramour is a cost 3 strength 3 card with only intrigue icons, and she has amazing artwork.  Her ability is that after she is declared as an attacker  you may pick any character and they must block her, this is good to draw out the big characters your opponent may have on the board.  Desert Scavenger is a 1 cost 1 strength with power only.  They can be knelt to reduce the cost of the next Martell character by 1.  The Greenblood Trader is cost 2, strength 1 with only the intrigue icon, and her ability is that when she enters play you may look at the top 2 cards of your deck, put 1 in hand, and the other at the bottom of the deck. 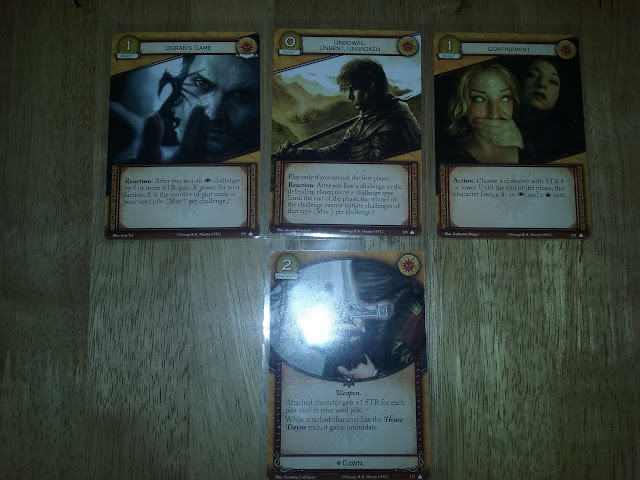 Dorans Game is a 1 cost event that can be played as a reaction after you win an intrigue challenge by 5 or more strength, and you gain power equal to the amount of plot cards in your used pile, so you can get up to 6 power in a turn with this is played right, yes it will be late game, but it will be a brutal swing.  Unbowed, unbent, unbroken is a 0 cost event that can only be played if you are the second player, and have lost a challenge, you then chose a challenge type and the opponent can not initiate any challenges of that type for the rest of the turn.  Confinement is a 1 cost event that can be used on a character of strength 4 or lower, and it gets rid of all the challenge type icons on a card.  Lastly we have the sword Dawn as an attachment, the wielder gets plus 1 strength for each plot in your used pile, if the attached character has the House Dayne trait they also get intimidate. 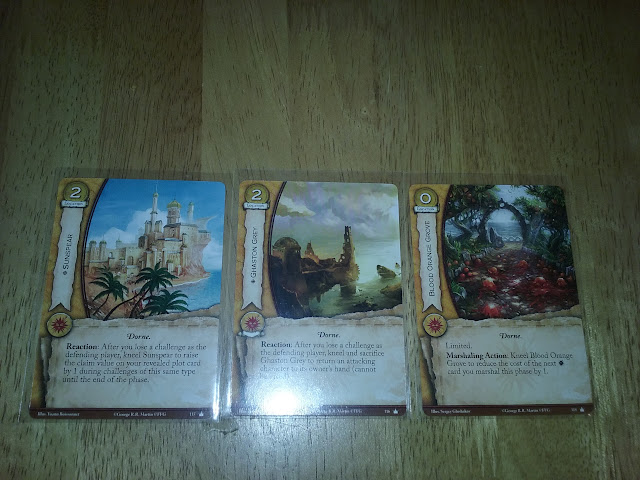 We have 3 locations for house Martell, starting with Sunspear which a cost 2 location that has a reaction that after you lose a challenge whilst defending you can kneel it to raise the claim on your card by 1 for challenges of the same type.  Ghaston Grey is a 3 cost location that has the ability after you lose a challenge in which you are defending, kneel it to return an attacking character to your opponents hand.  Blood Orange Grove is a 0 cost location that can be knelt to reduce the cost of the next Martell card y 1.


The Martells are a late game powerhouse, with cards that get more powerful the more plots are used, so they are about defending until late game then hitting hard.


To learn more about A Game of Thrones the card game second edition take a look here
Stick with us as we look at the Factions in future articles to give you an idea of how they play, and take a look at some of the upcoming chapter packs that add more to your game.

Come and join us in all sorts of gaming chat in our Facebook group here, and come follow us on Twitter @rollyoursix join the chat, and tell us about your games!
Labels: a game of thrones lcg faction focus