Today we have another battle report for you from Battle Cry, with me taking the role as the Confederates, and Olivia commanding the Union forces.

The Battle of Hoke's Run, also known as the Battle of Falling Waters or Hainesville, took place on July 2, 1861, in Berkeley County, Virginia (now West Virginia) as part of the Manassas Campaign of the American Civil War. Notable as an early engagement of Confederate Colonel Thomas J. Jackson and his Brigade of Virginia Volunteers, nineteen days before their famous nickname would originate, this brief skirmish was hailed by both sides as a stern lesson to the other. Acting precisely upon the orders of a superior officer about how to operate in the face of superior numbers, Jackson's forces resisted General Robert Patterson's Union forces briefly and then slowly retreated over several miles. 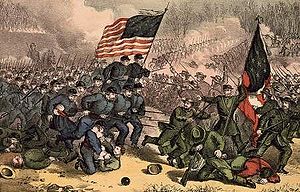 Casualty figures vary. The National Park Service quotes Union as 23 and Confederate as 91 (without differentiating types of casualties).  Kennedy cites 75 Union deaths and 25 Confederate deaths. In his Official Report, Major-General Robert Patterson states the number of Confederate deaths as "over sixty" but does not describe Union casualties.

Will History repeat itself? or things work out differently? read on to find out...... 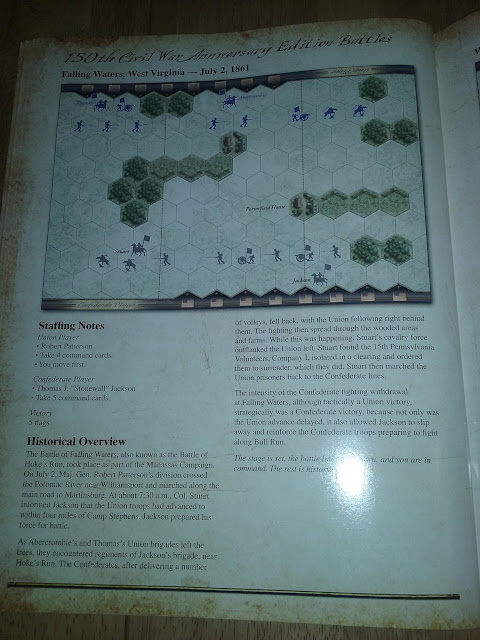 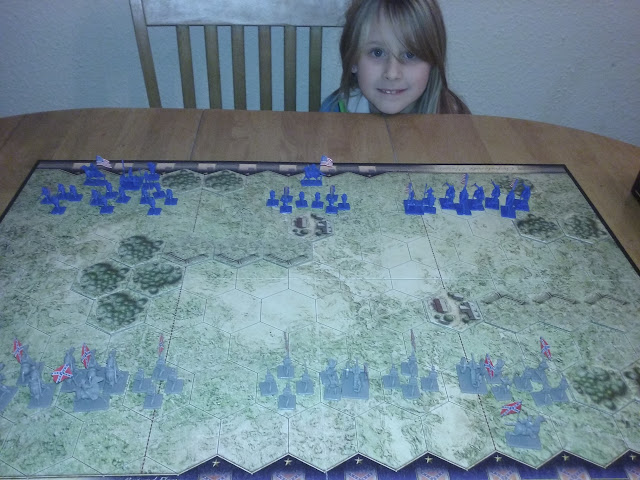 We set up the battlefield as described in the scenario, drew our cards and prepared for battle...... 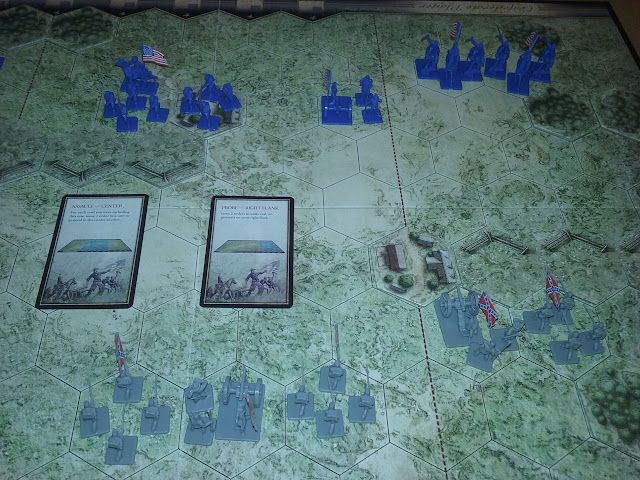 Union cards are shown on the left as they went first, confederate on the right.  The Union forces did an Assault in the centre to bring up the troops to take position behind the fences, and move the artillery into range.  The Confederate forces advanced on the right flank looking to occupy the defensive positions there before the Union cavalry got to them.  No firing happened this turn. 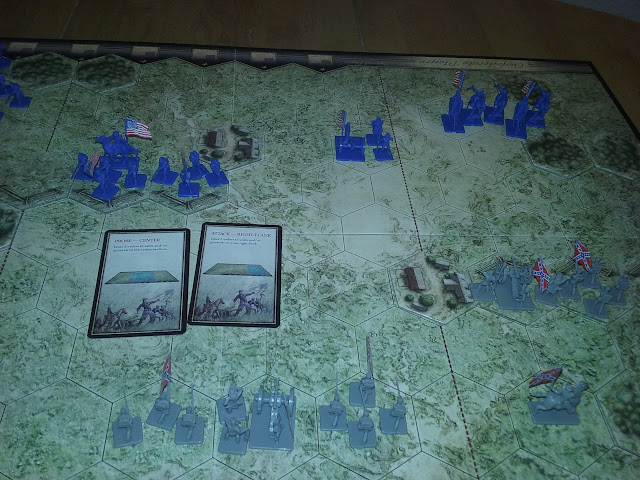 The Union forces probed in the centre, their infantry occupying positions behind the fences, and fired but at this range casualties where light, only one infantry stand falling.  The Confederate forces attacked ont he right flank, bringing up the artillery and infantry to the defensive positions there. 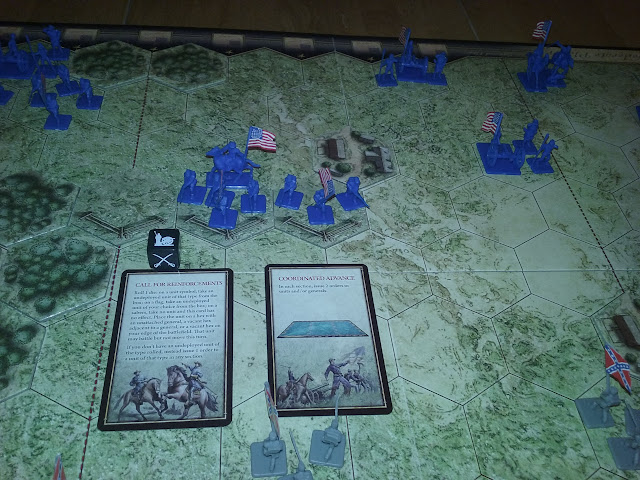 Olivia played a call for reinforcements, and rolled an artillery unit, so they rolled onto the board in the centre to provide some extra firepower.  I played a coordinated advance to advance my cavalry on the left flank to get into position to attack, advance my infantry in the centre, and the artillery opened fire on the right killing a cavalry stand and pushing the unit back. 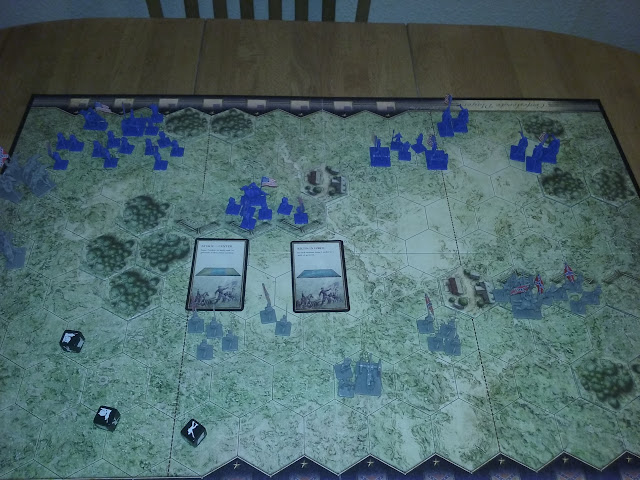 Union forces Attacked in the centre taking another stand from an infantry unit.  Rebel forces played a recon in force and activated a unit in each section, the cannons in the centre causing casualties on the sheltering Union forces, and the cavalry on the left killing an infantry stand. 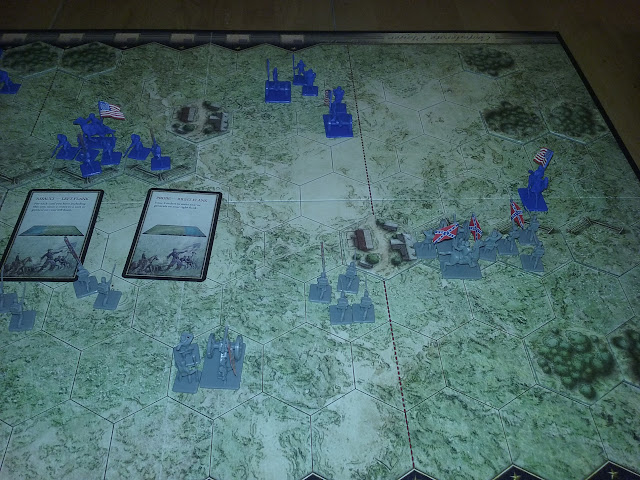 Union forces attacked on their left flank, hurling their cavalry into the rebel lines and cutting down only 1 stand of infantry.  This would prove problematic as the Confederate forces Probed the right flank destroying 1 cavalry unit completely and reducing the other to just the banner left. 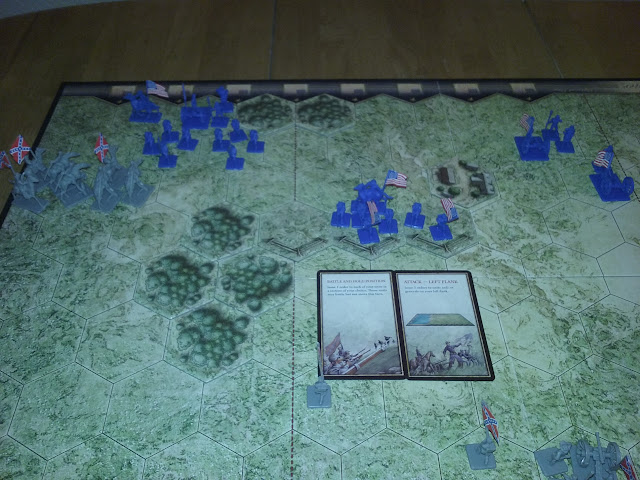 Olivia played battle and hold positions to unleash the maximum firepower in the centre. after the fusillade of musket and artillery fire finished only the banners remained out of the two infantry units.  The Confederates attacked on the left flank taking down another infantry unit and creeping ahead in points. 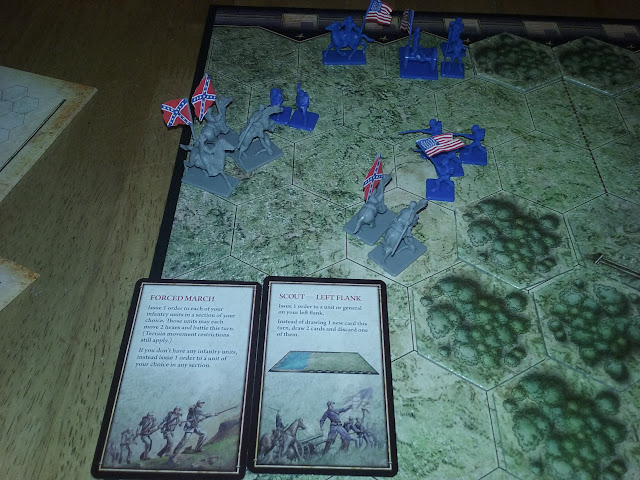 Union forces played forced march, and pushed back the cavalry inflicting only one casualty, whilst the Rebels scouted on the left flank inflicting more infantry casualties. 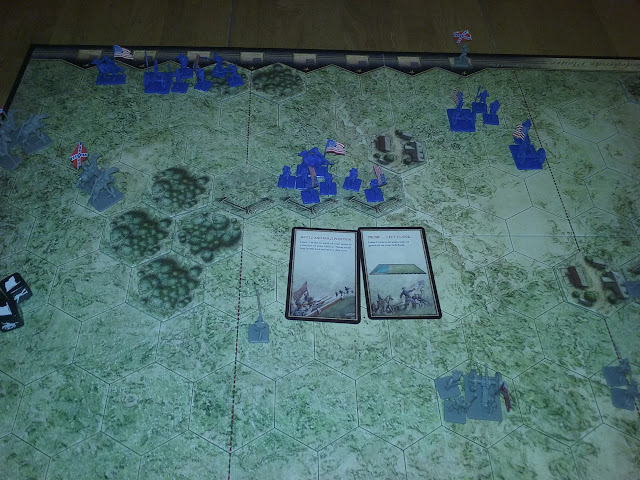 The union centre played battle and hold position again to try to gain some flags, and wiped out a confederate infantry unit gaining their first point, but the Rebel cavalry probed on the left again wiping out an infantry unit. 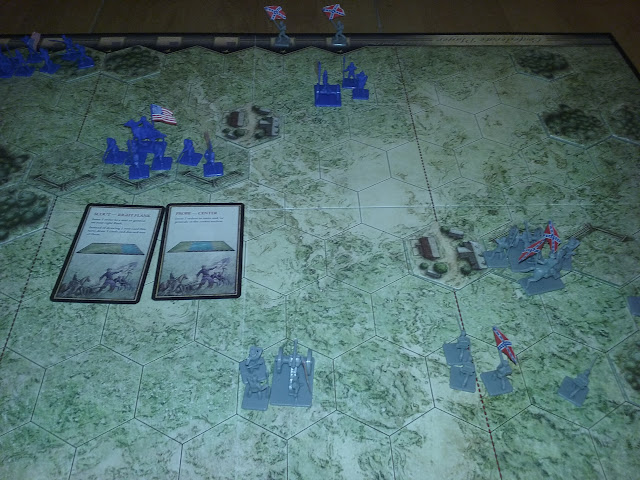 The Union played a scout on their right to push the cavalry back again, but not inflict any casualties due to some unlucky roles.  Confederate artillery fire in the centre took out the union cannon to give the winning victory point to the rebels. 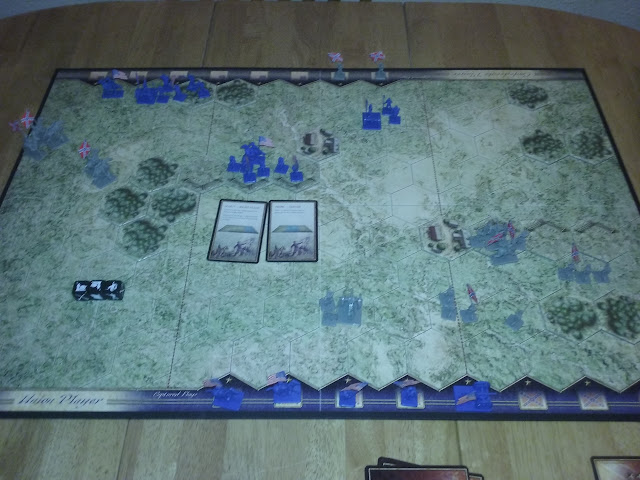 A confederate victory 5-2.  It was a tough mission this one, and I feel I only won due to some lucky dice roles, as if Olivia had wiped out those units in the centre earlier things would have been different, or if she had more luck pushing my cavalry on the left flank and inflicting more casualties.
Another battle down, and another Confederate victory, but then it is only 1861, and the war has a long way to go yet.........﻿