In this faction focus we look at House Greyjoy.  We will be looking at their strengths, and weaknesses and some of their best cards.


"We are ironborn. We're not subjects, we're not slaves. We do not plough the field or toil in the mine. We take what is ours."
―Balon Greyjoy

House Greyjoy is one of the Great Houses of Westeros. It rules over the Iron Islands, a harsh and bleak collection of islands off the west coast of Westeros, from the castle at Pyke. The head of the house is the Lord Reaper of Pyke.
House Greyjoy's sigil is traditionally a golden kraken on a black field. Their house motto is "We Do Not Sow." 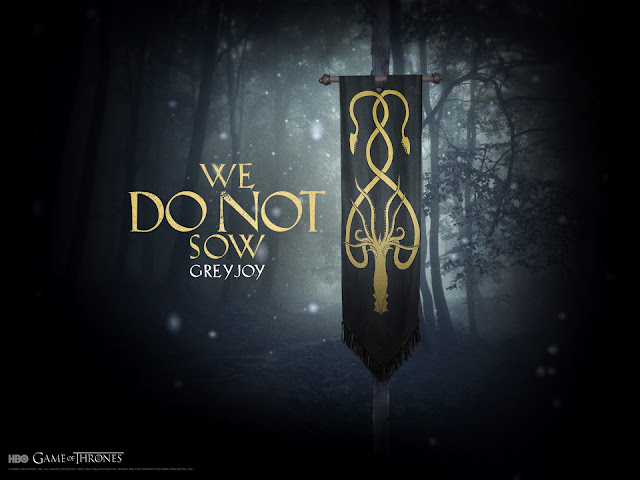 House Greyjoy boasts descent from the Grey King, a legendary King of the Iron Islands said to have ruled for a thousand years and taken a mermaid as wife. Like the vast majority of ironborn, they worship the Drowned God.
Lord Balon Greyjoy is the most recent head of the house. He led a rebellion against King Robert Baratheon eight years before the events of the series begin. Balon's sons Rodrik and Maron were killed in the unsuccessful rebellion. Balon's only surviving son Theon was made a ward of Lord Eddard Stark to ensure Balon's submission to King Robert
Lets take a look at some of the cards....... 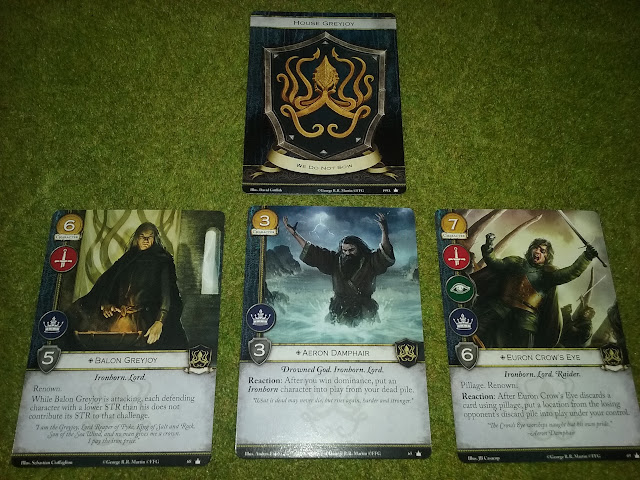 Balon Greyjoy is a cost 6 character with strength 5 and military and power icons, he also has renown so gains power ehen he wins a challenge.  When he attacks you ignore all characters with a lower strength then him so you he becomes very hard to stop.  Aeron Damphair is strength 3, cost 3 with only the power icon, but his reaction is after you win dominance you can put an Ironborn trait character into play from your dead pile.  Euron Crow`s Eye is cost 7, strength 6 with all three icons, he has pillage that removes the top card of your opponents deck after you win a challenge, and renown as well.  His reaction is after he discards a card using pillage you can put a location from your opponents discard pile into play kneeling under your control.  With his abilities he is a real threat to your opponents. 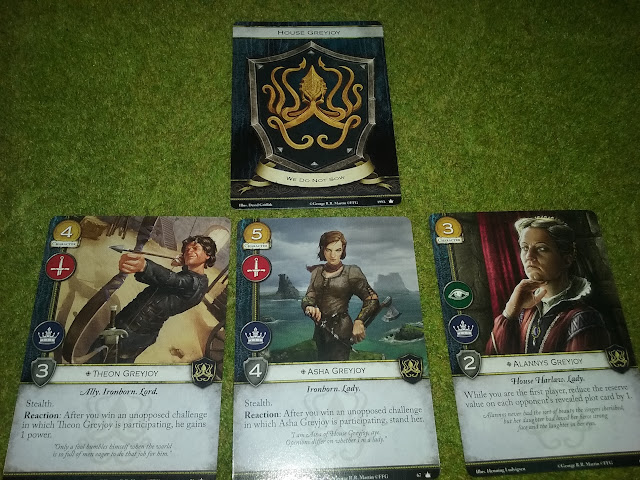 Theon is a cost 4, strength 3 card with military and power challenge icons and stealth so he can pick a character that can not block him.  He has a reaction that when you win an unopposed challenge he is participating in you gain a power for him.  Asha is a cost 5 strength 4 character with military and power icons, she also has stealth, and her reaction is when you win an unopposed challenge she is participating in, stand her.  This is good as it lets you use her again for another challenge, or to defend if need be.  Alannys is cost 3, strength 2, with intrigue and power, intrigue is something this house is short on.  Whilst you are the first player and you have her in play you reduce the reserve cost of your opponents plots by 1, making them have some hard decisions on which cards to kep and which to discard. 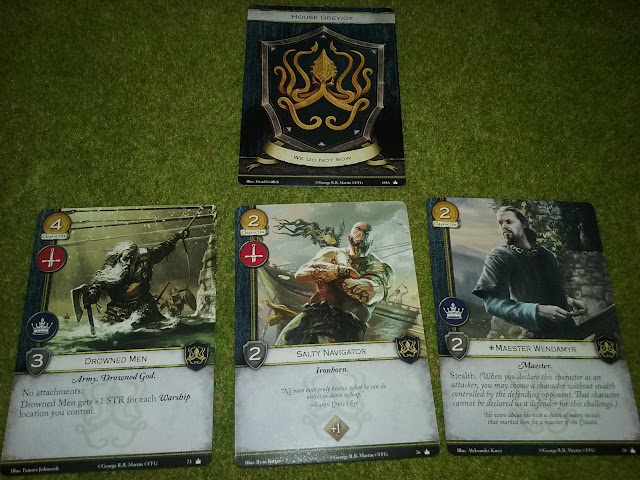 Drowned men are cost 4 strength 3, with military and power, and they get plus 1 strength for each warship location you control, so can potentially become quite powerful.  The art on the card is on my favourites in the game.  Salty Navigator is cost 2, strength 2 with military icon, he also gives you a plus 1 to your initiative making it easier to choose to go first or second.  Maester Wendamyr is cost 2, strength 2, with the power icon and stealth. 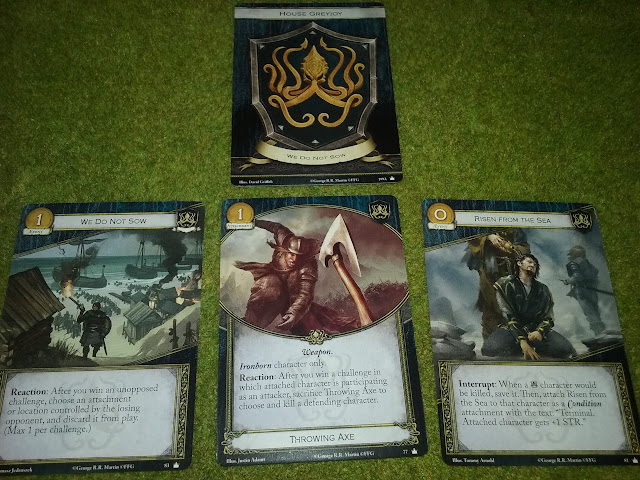 We do not sow is a 1 cost event that can be played after you win an unopposed challenge, and you choose an attachment or location controlled by your opponent and discard it, meaning you can burn down their money making locations, or ones that have an effect, this is a dangerous card!  Throwing axe is a 1 cost attachment for Ironborn characters only, the reaction is after you win a challenge in which the attached character is participating sacrifice the throwing axe to choose and kill a defending character, so it makes your opponent think twice about blocking with his best character unless he will win.  Risen from the sea is a 0 cost interrupt event.  it triggers when a Greyjoy character is killed, you play the card and save the character, also giving him 1 strength. 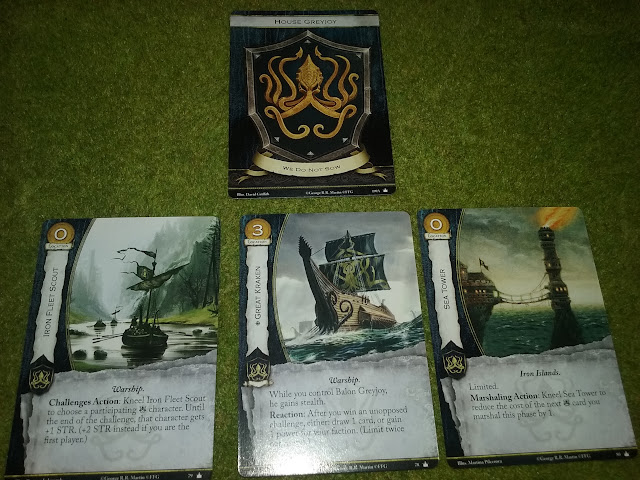 The iron fleet scout is a 0 cost location that can ne knelt in the challenges phase to increase the strength of a Greyjoy character.  It also works to buff the drowned men as they get stronger for each warship location you control.  The Great Kraken is a 3 cost location again a warship so powering up the drowned men.  When you have it out and control Balon he gains stealth, which makes him a powerhouse!  For a reaction after you win an unopposed challenge you can either draw a card, or gain a gold with a limit of twice per round.  The Sea Tower is a 0 cost limited location that you can kneel to reduce the cost of Greyjoy characters.

House Greyjoy is a brutal faction, about military challenges, and destroying your opponents locations, they have a good range of stealth and combat and ways to bring back characters and keep them alive, they just need to watch out for intrigue heavy houses.

To learn more about A Game of Thrones the card game second edition take a look here
Stick with us as we look at the Factions in future articles to give you an idea of how they play, and take a look at some of the upcoming chapter packs that add more to your game.

Come and join us in all sorts of gaming chat in our Facebook group here, and come follow us on Twitter @rollyoursix join the chat, and tell us about your games!
Labels: a game of thrones lcg faction focus