Arriving to aid the Romulan Star Empire in its fight is the Valdore classed Warbird.  A great looking ship first seen in the film Nemesis it looks mean and hawk like, and is the largest model I have yet with good detail. 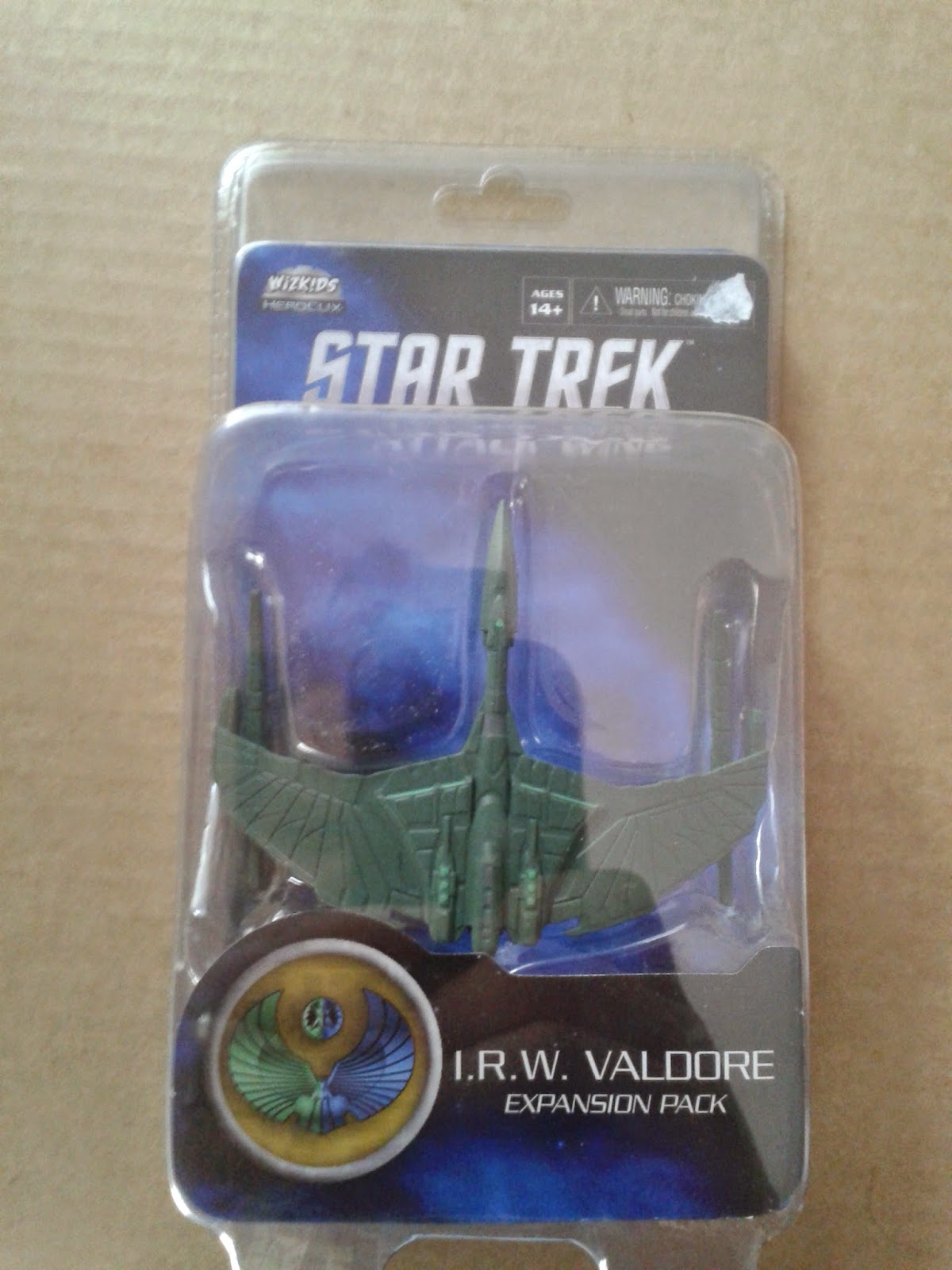 The usual blister packaging, I will find an easy way to get into these one day! 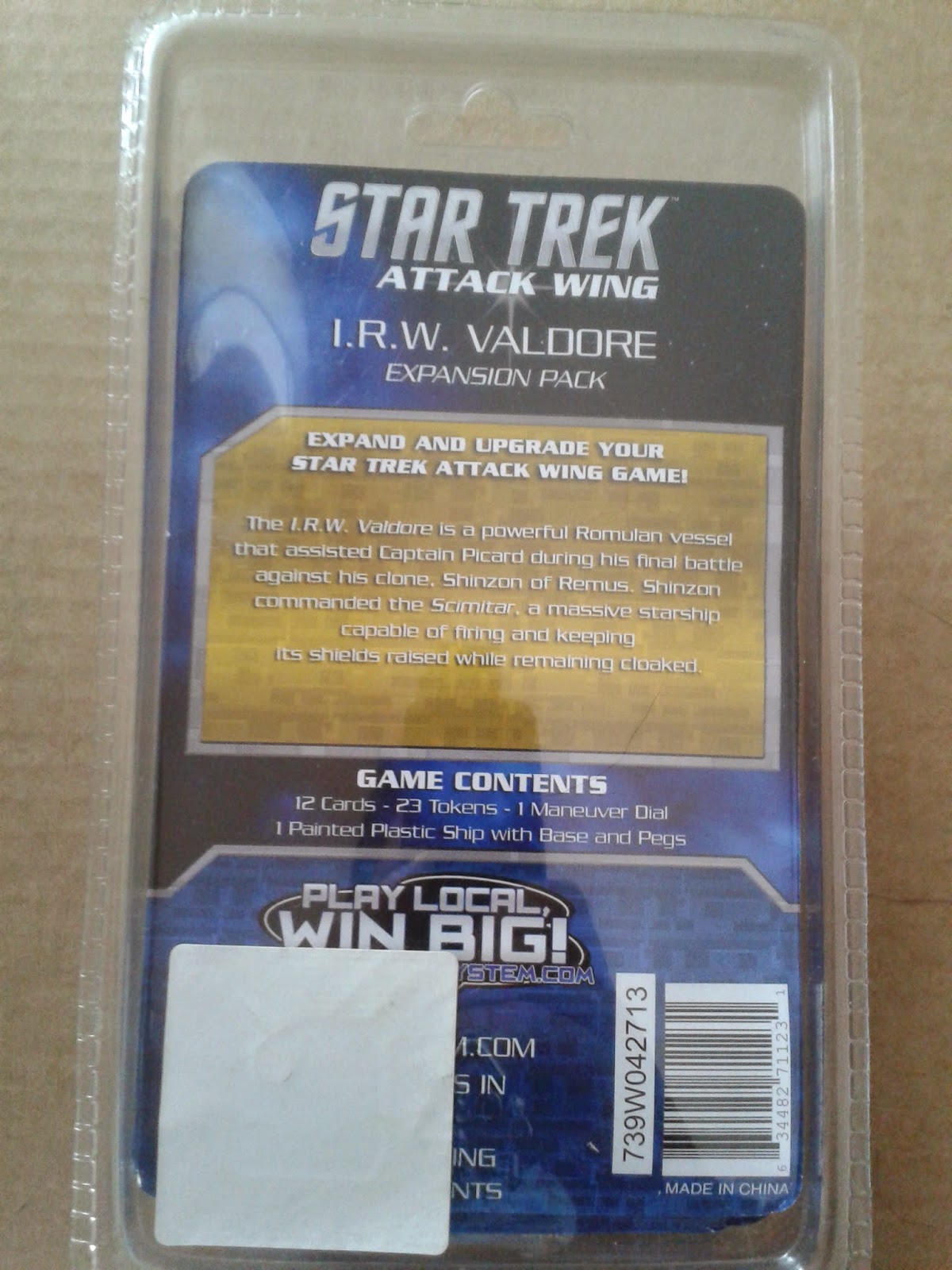 a bit of fluff on the back.
In the year 2379, two Valdore-type starships assisted the USS Enterprise-E in attacking the rogue Reman warbird Scimitar in the Bassen Rift.
Among these ships was the Valdore - under the command of Commander Donatra. Both ships were critically damaged during the battle. (Star Trek Nemesis)

Similar in design to the D'deridex-class warbird, the Valdore-type was a large, fixed-wing vessel. Ships of the class had a color scheme of dark-green or brown.
With a wingspan roughly 900 meters wide, the vessel featured a large section extending forward to create a down-sloped head shape. Warp nacelles were connected at the end of each wing with impulse engines mounted aft. The hull was marked by distinctive "feather" shaped plating. (Star Trek Nemesis)
Ships of the Valdore-type featured several forward-mounted disruptor banks located on each wing and some on the forward section of the ship. It had at least one forward torpedo launcher able to fire four torpedoes for each recharge. (Star Trek Nemesis)
The command center of the Valdore-type consisted of a roughly circular room distinguished by several console positions.
With computers lining the rear bulkheads, a center seat or command chair and free-standing console were flanked by two additional stations.
As another contrast to the D'deridex-class, the viewscreen of the Valdore-type was oval shaped

A large amount of card in this one! 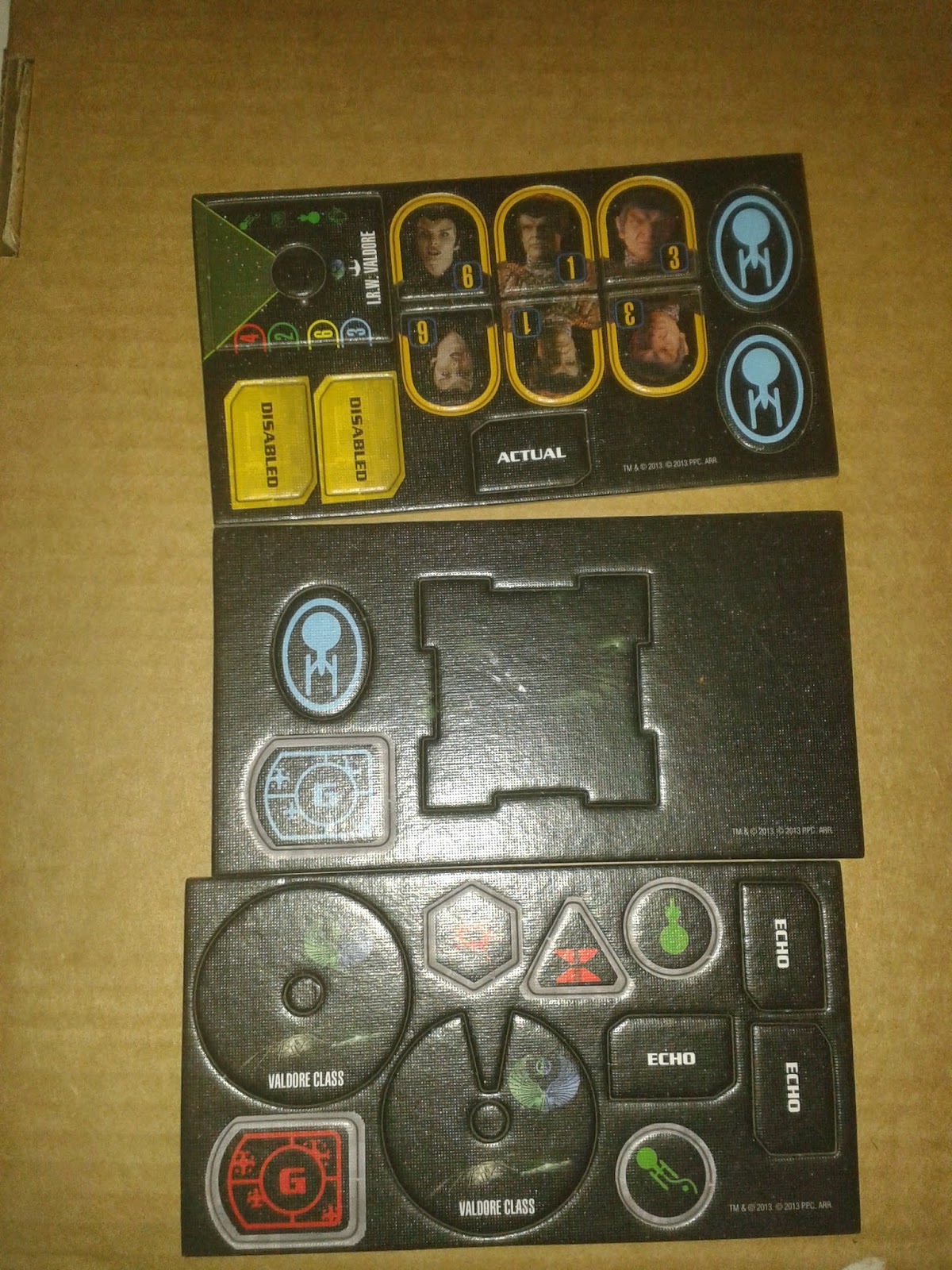 Hmm so whats on that middle on? 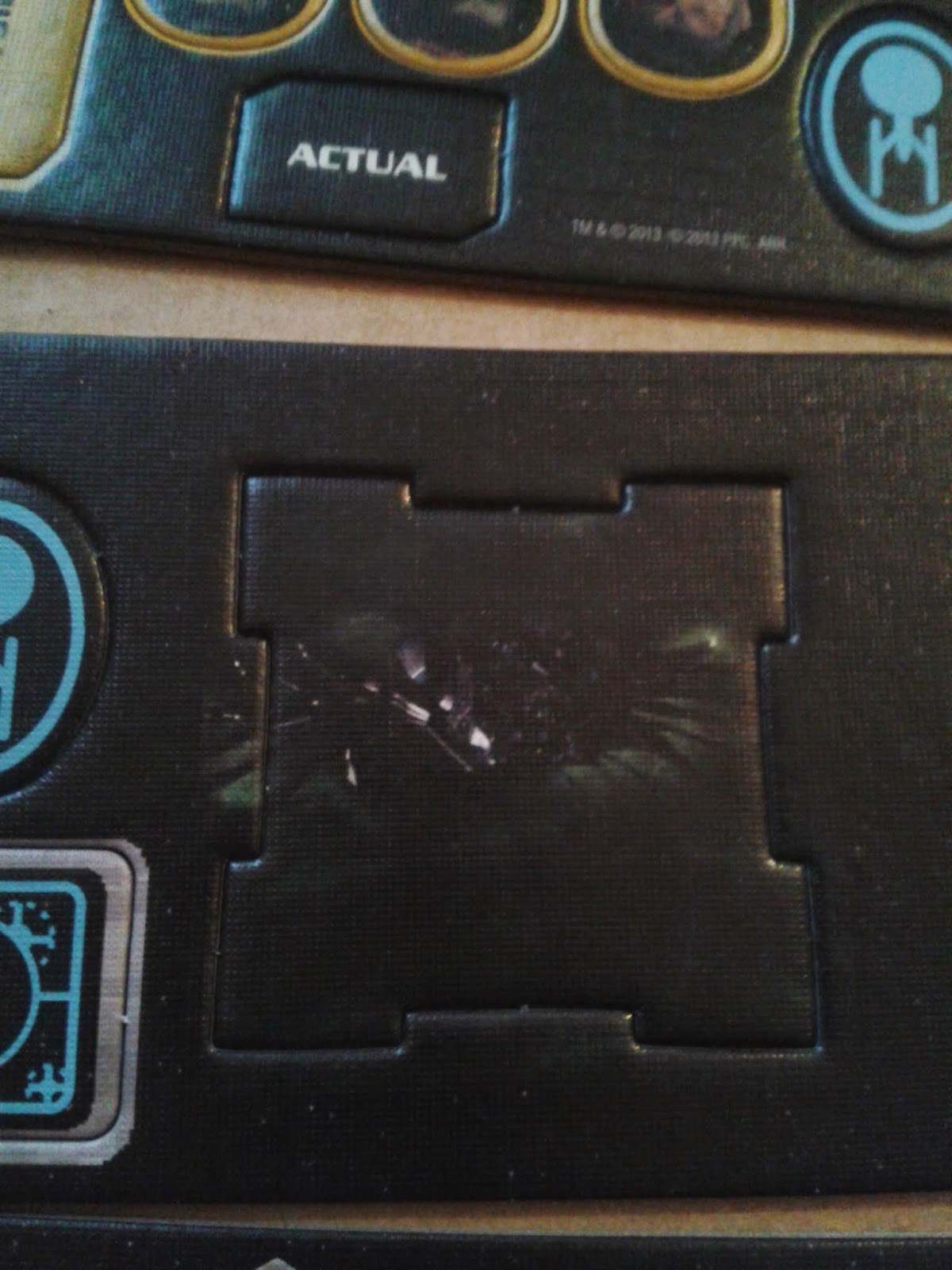 ﻿
Its a token for the Scimitar!! the Reman warbird from Nemesis.  the token is for the mission enclosed which we will look at later. 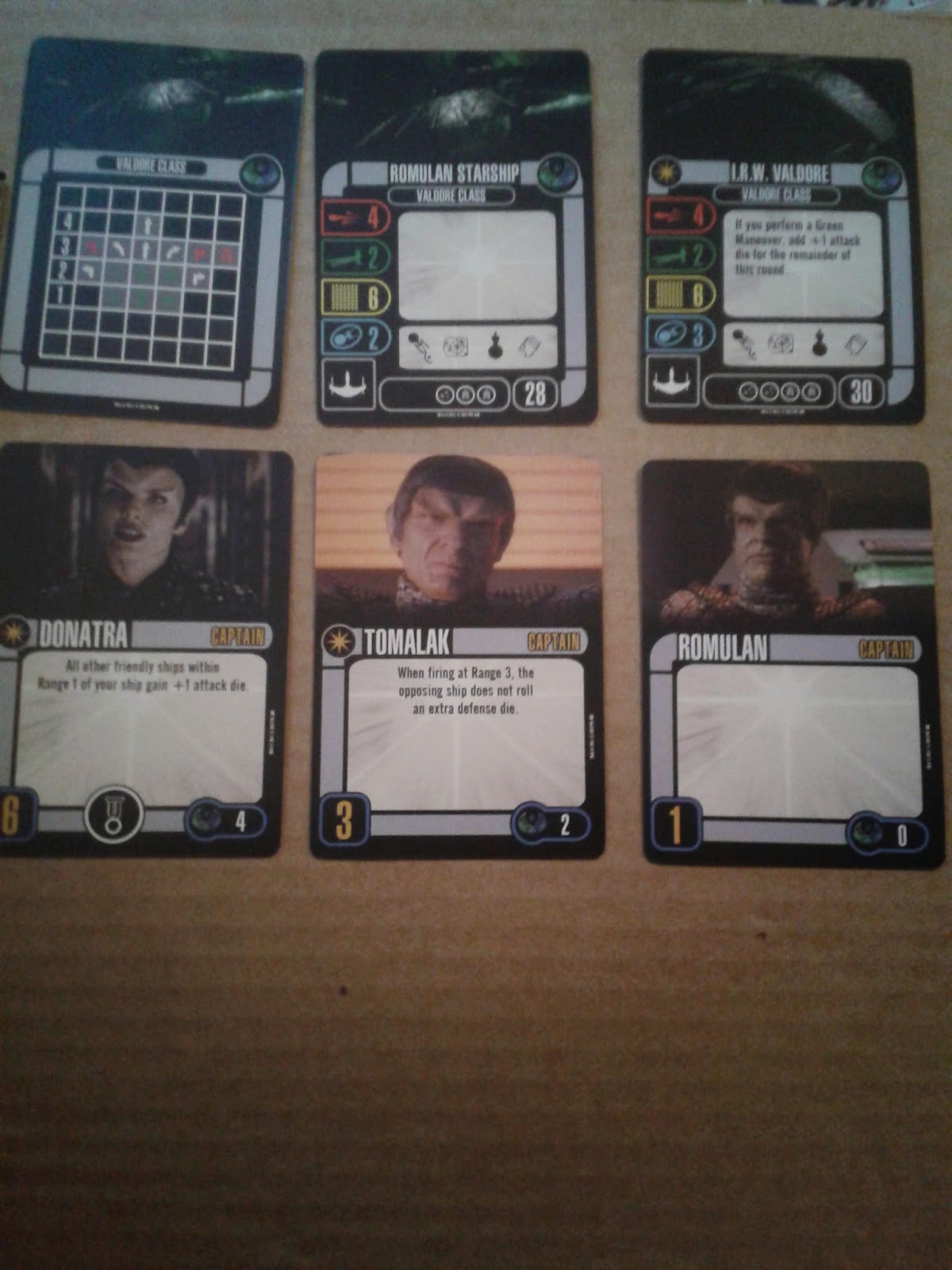 As normal the manoeuvre card.  Like all Romulan ships its nimble, and the named version can throw out some firepower with its inbuilt ability.

As always a generic captain, plus Donatra from the film, and Tomalak from the series who I liked as a character. 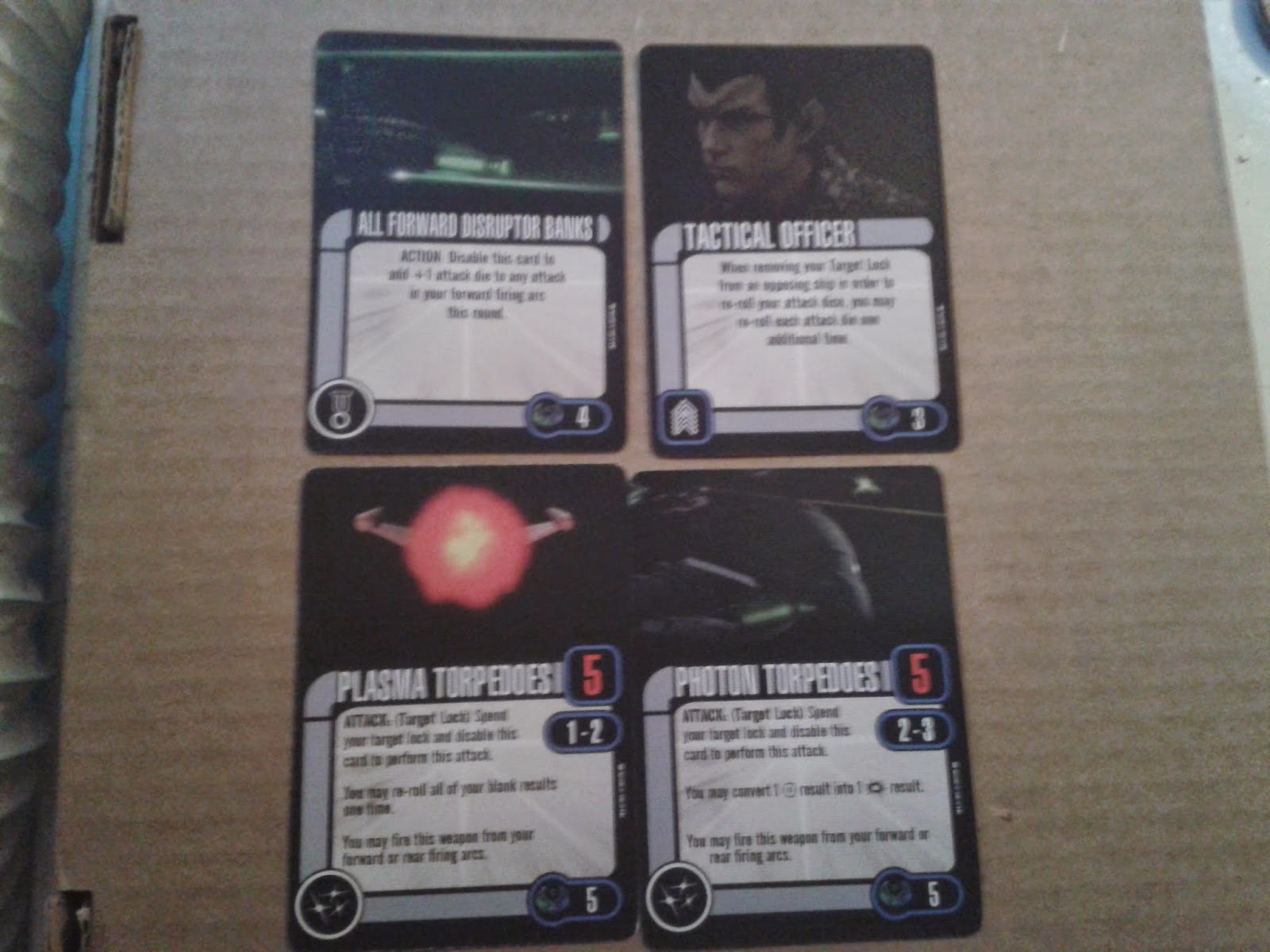 The standard weapons, only one crew in the form of the Tactical officer who has a good ability though.  Torpedoes of both flavour, and a great talent, All forward Disruptor banks.  adds an extra attack dice but Imagine saying it would be cool... yelling it all and pounding the table in character 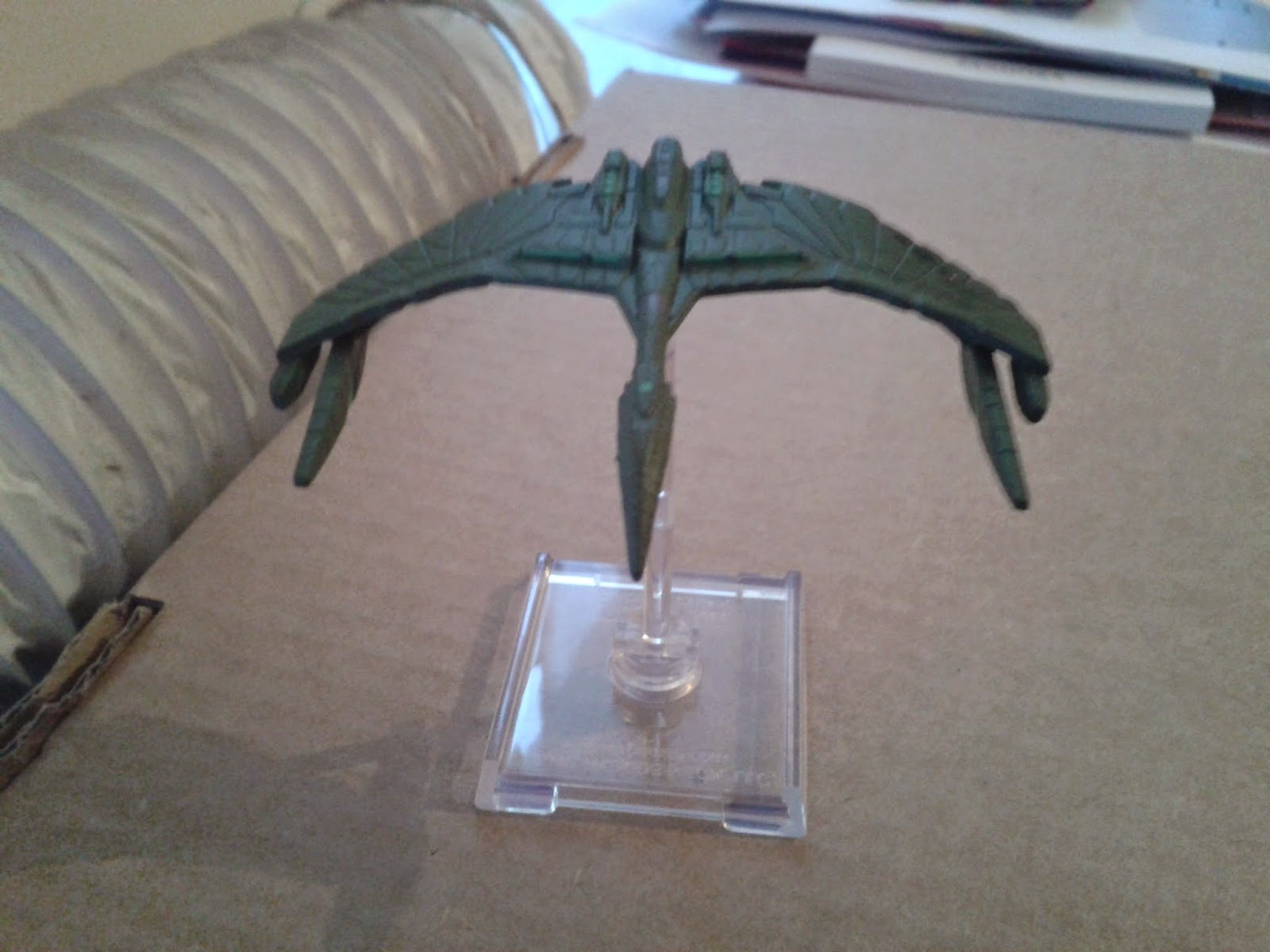 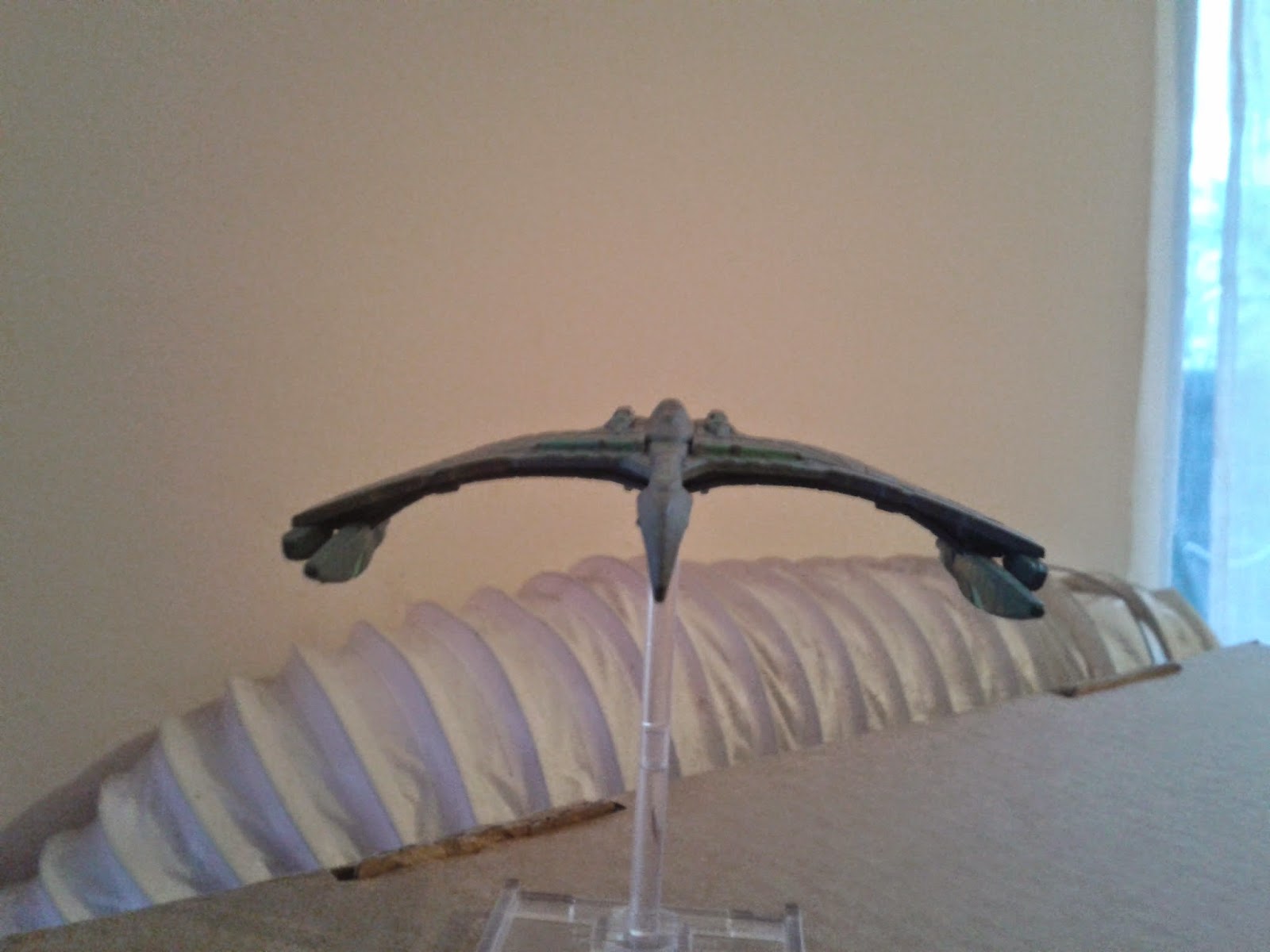 and looks great from every angle 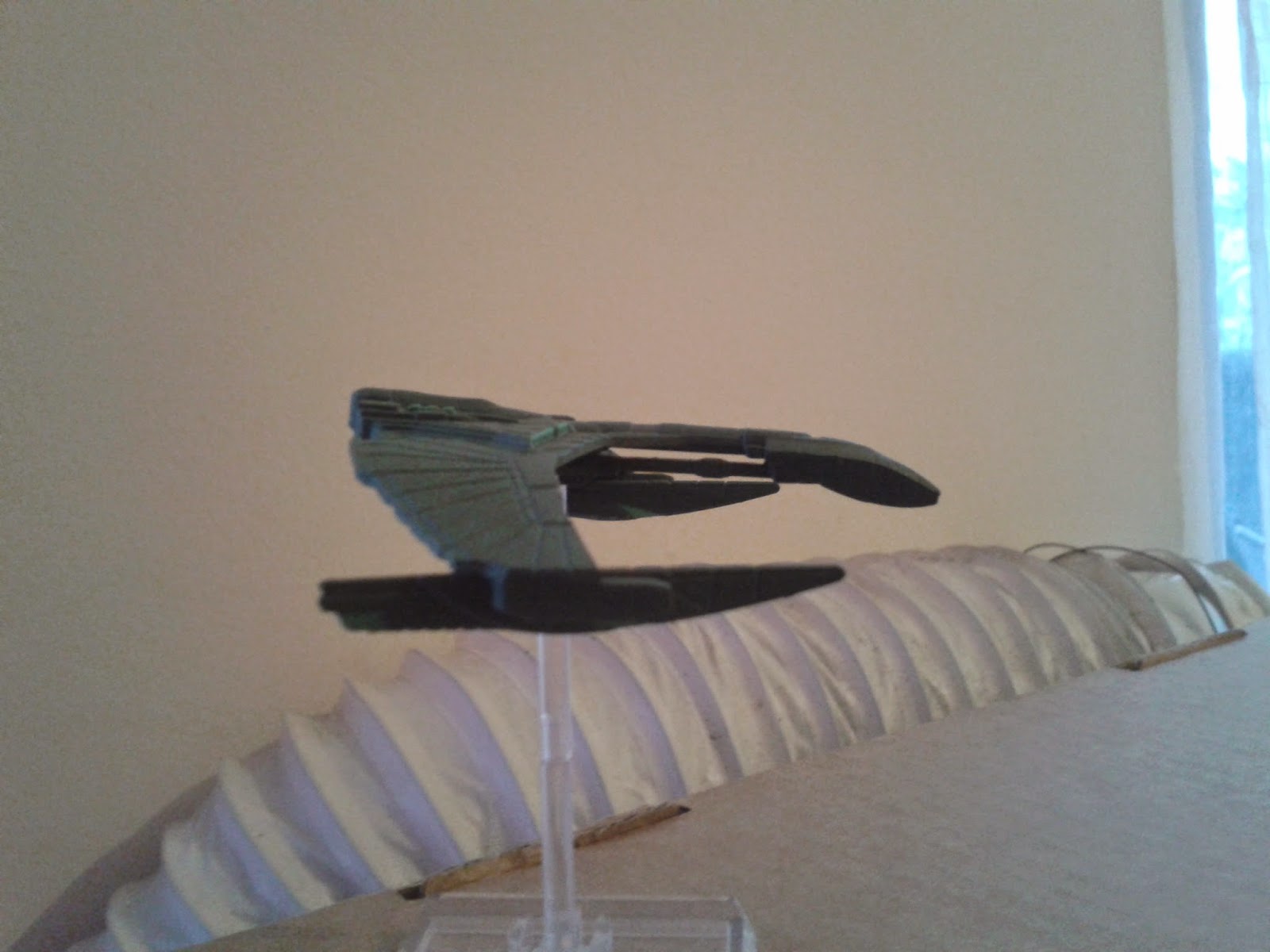 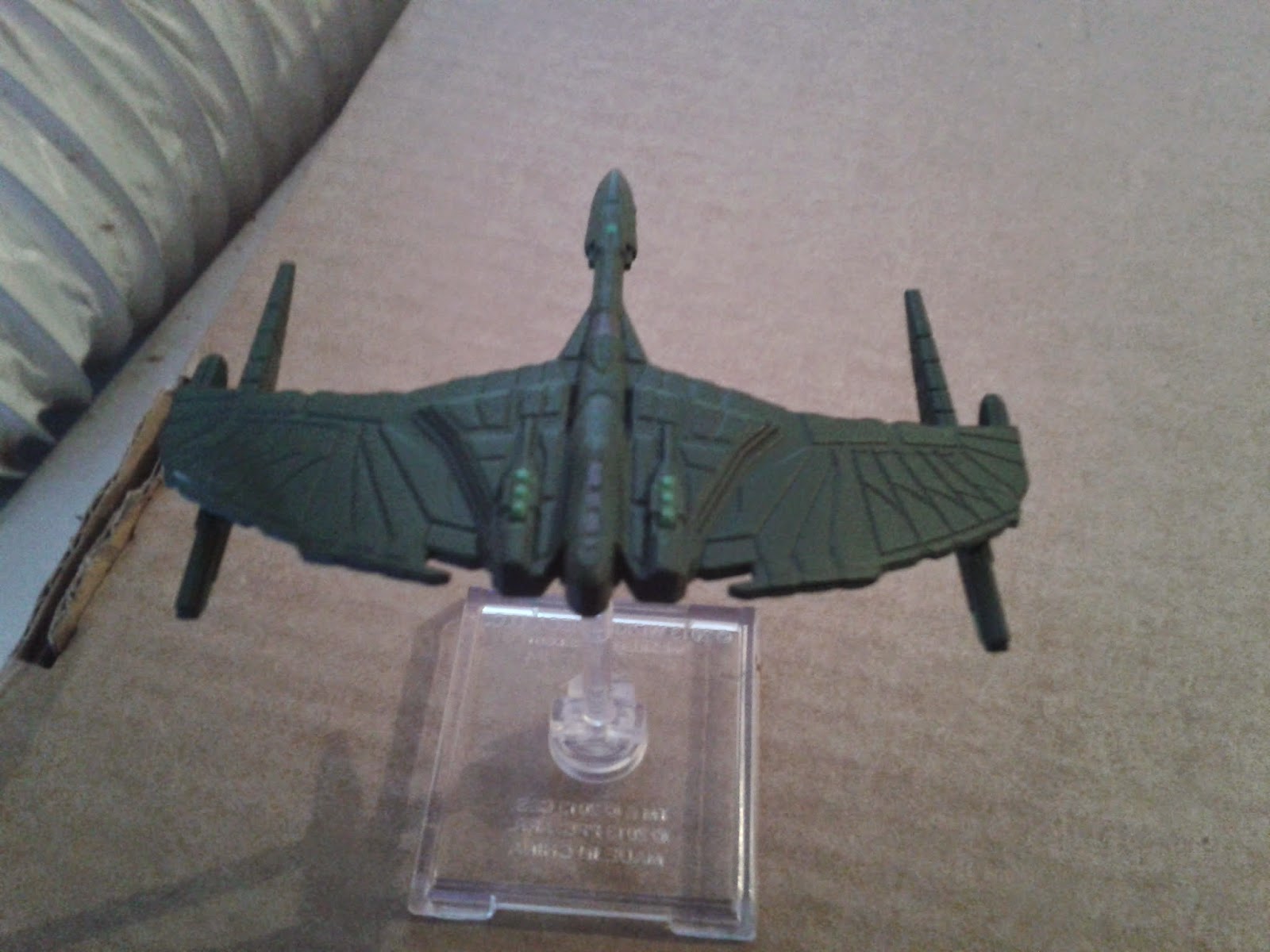 and the paint Is not too bad either. I love how this ship looks.

Last thing in the pack is the mission. 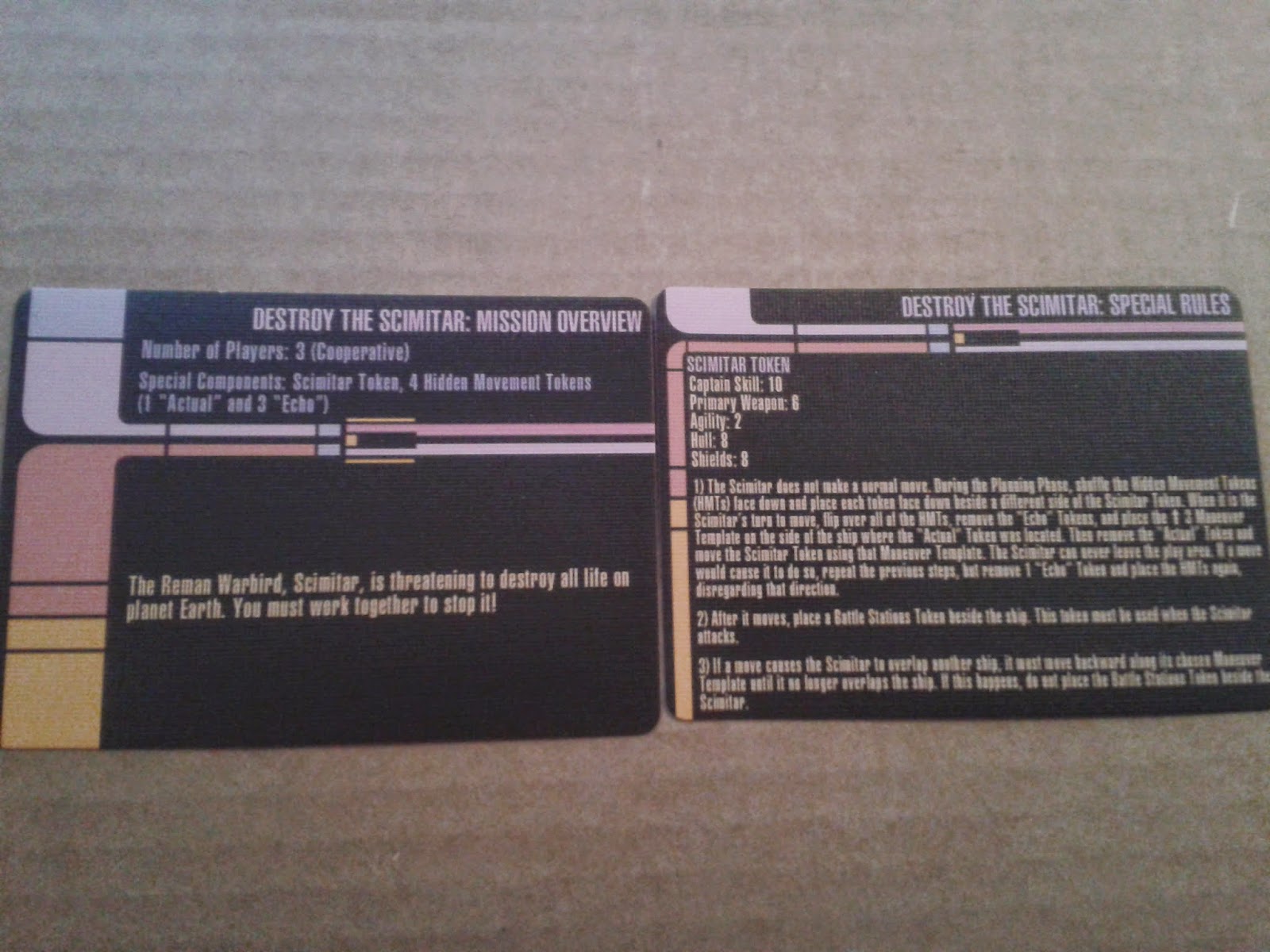 A 3player cooperative mission! Destroy the Scimitar.  The scimitar token is in the pack with its echo or true move tokens, you shuffle them up and place them randomly around the ship flip it and follow its movement rules. it has all the ships stats, how it attacks and what actions it takes so the ship runs in AI totally. looks such great fun.

A must have expansion.
Labels: Attack Wing Romulan Star Trek