We dive back to the Delta Quadrant to take a look at Species 8472, and there fearsome Bioships.
The bioship was an organic vessel that was used by Species 8472 and had a similar genetic makeup to their pilots. The bioships, and Species 8472 themselves, were resistant to assimilation by the Borg and carried an extremely powerful weapon that could destroy even Borg vessels easily. The bioships contained a series of vein-like conduits which carried electrodynamic fluid, possibly for use as an energy source. 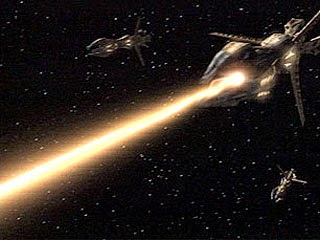 Eight of these ships could collect and combine their firepower, using an energy focusing ship, which enabled them to fire a blast so powerful it could destroy a planet. When the Borg entered fluidic space, they were forced back by this resistance. Defense against these ships was found by the crew of USS Voyager, in the form of modified Borg nanoprobes.

So what do we get in the ship pack? lots of goodies that's what.....

The usual tokens dials and bits of piece of cardboard gubbins 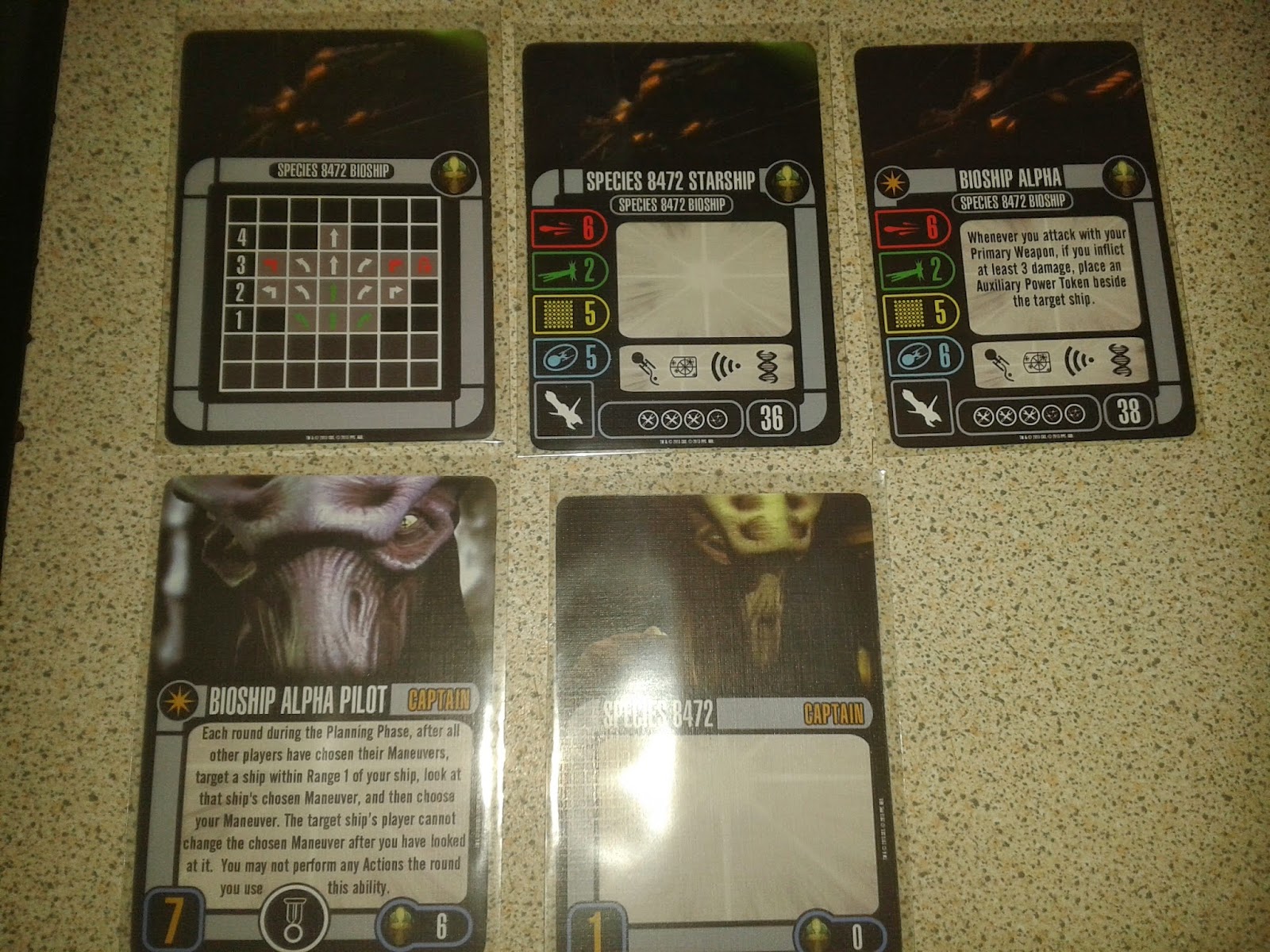 For the size of the ship it is manoeuvrable, and powerful.  Good firepower, good shields and hull.  The named bioships ability is if you inflict at least 3 damage you also give the enemy an auxiliary power token as well makes it very effective. We have the generic species 8472 captain, and the skill 7 Bioship Alpha Pilot.  He has one elite talent, his ability allows you to look at you ropponents dial before you choose your manoeuvre.  You don't get an action, but it allows you to plan your attack right. You may also notice a new icon in the action bar.... 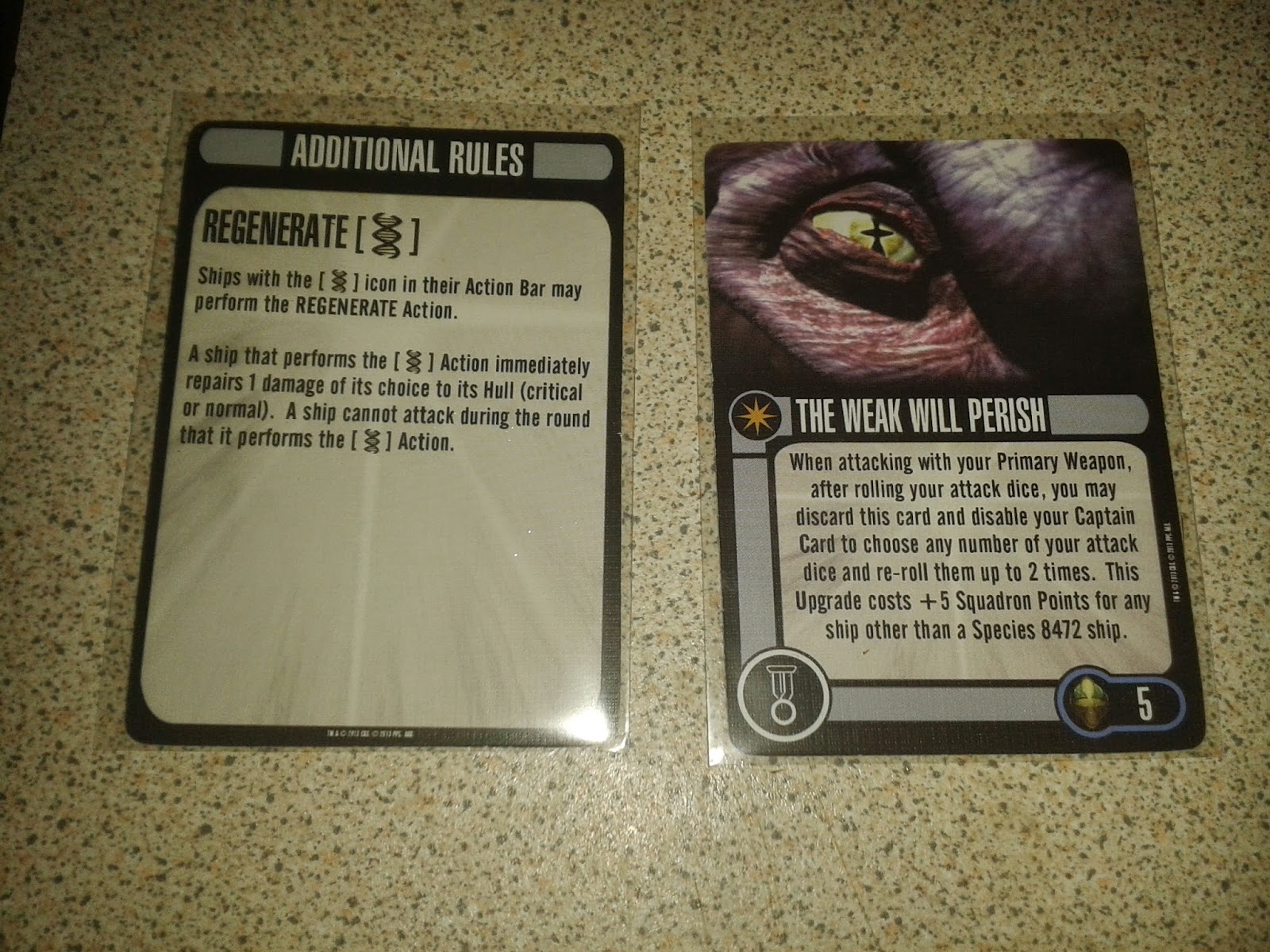 Well here is that new action, regenerate.  Very handy. For the Elie talent you have the Weak will perish, which allow you to reroll your attack dice up to twice.  Very useful for when you just have to destroy that enemy ship. 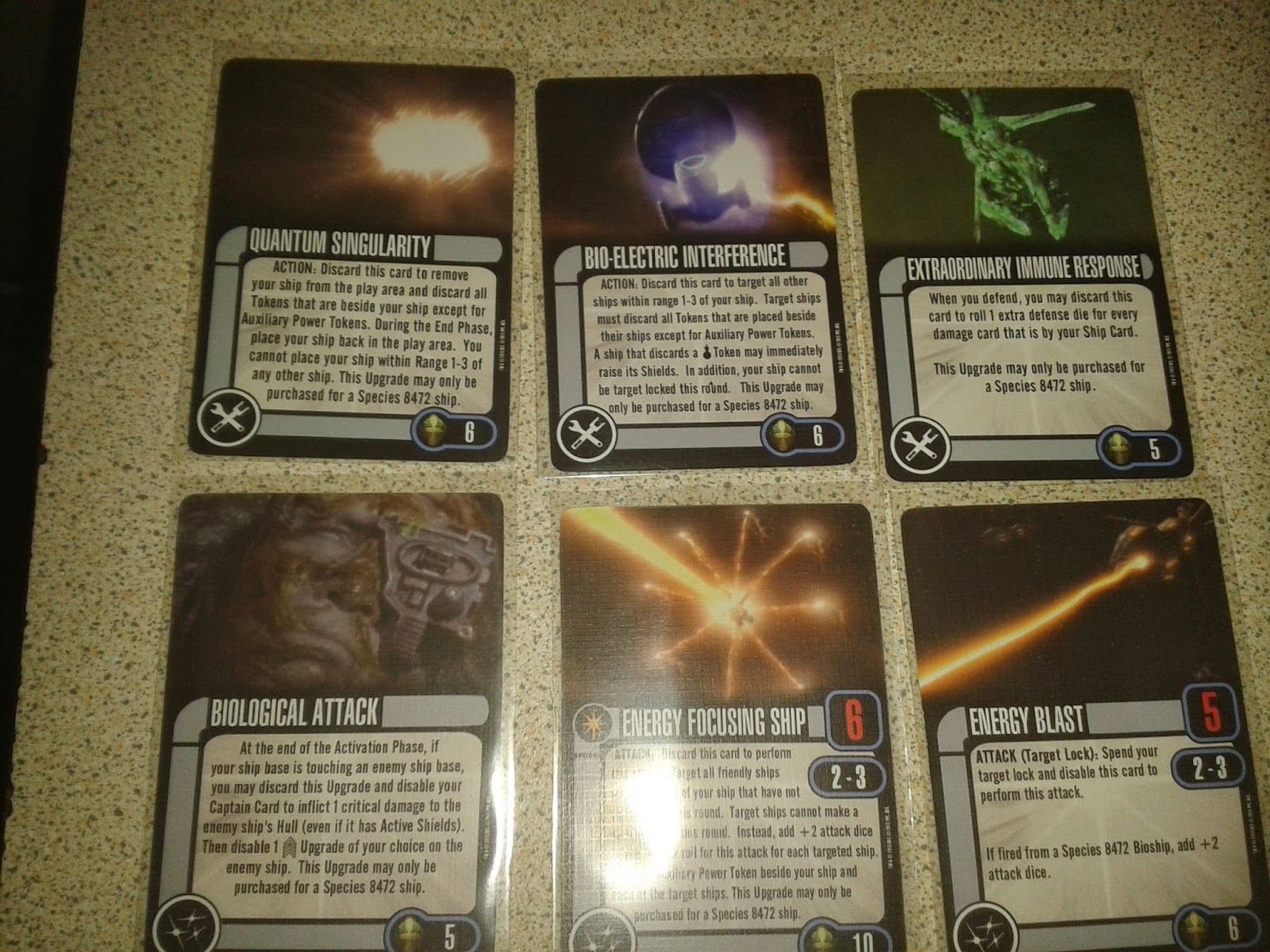 No crew in this ship, but there is a nice selection of weapons and tech.  Quantom singularity is a good one, allows you to reappear somewhere else on the board, good if you are cornered,  or need to get away to regenerate a bit.  Bio electric interference allows you to take tokens off enemy ships and uncloak them, seems expensive for what it does in my opinion.  Extraordinary immune response is handy when you your getting a battering, you discard it roll an extra defence dice for each damage card you have suffered.  For weapons we have biological attack, it only works if you bump into a ship, disable your captain and inflict a critical to the enemies hull even if it has shields, and disable a crewman, its handy, but relies on you flying into an enemy ship.  Energy focusing ship is expensive at 10 points, but adds more firepower for ships surrounding you, at the effect of auxiliary power, and the ships around you not getting to fire.  Energy blast is a 7 power weapon which is spend your target lock and disable it to provide some firepower.  some good cards are in this set to make a brutal ship.
Now to see the ship itself.... 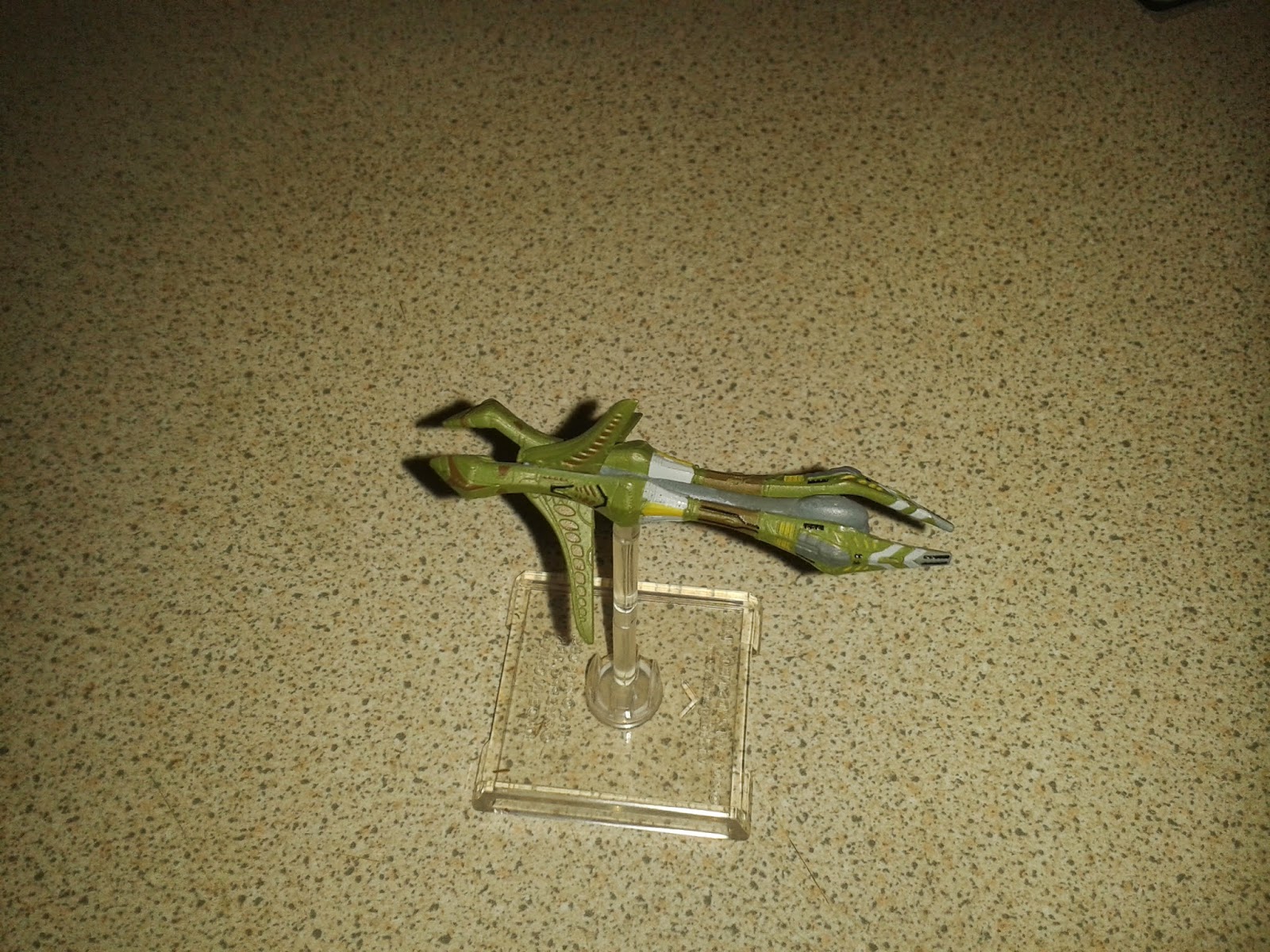 For attack wing its pretty well painted, and great looking. 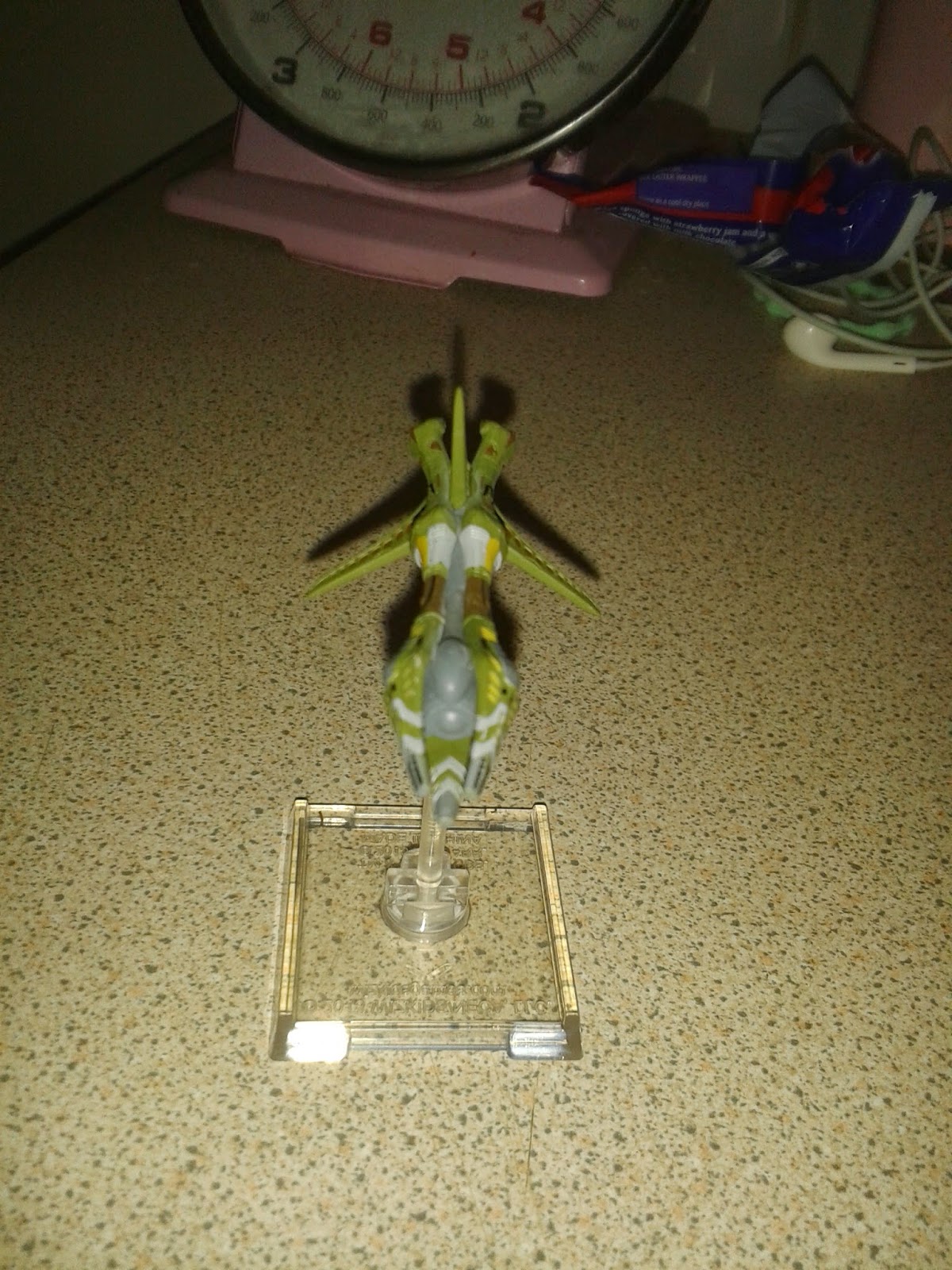 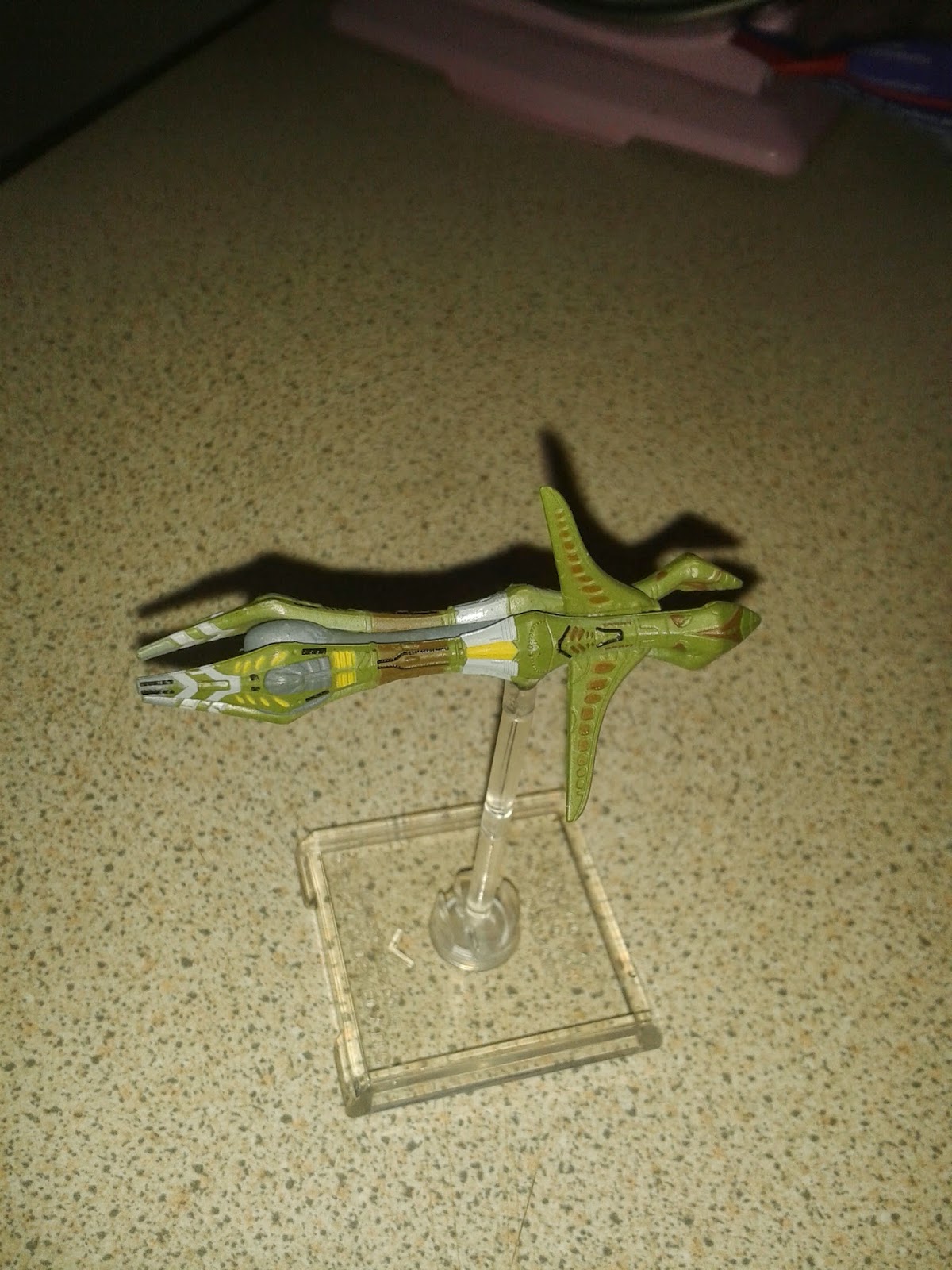