Continuing our stay in the Delta quadrant we look at another of the latest ships for Star Trek Attack Wing.  The Alpha Hunter for the Hirogen race in the Independent faction.
The Hirogen are an alien culture encountered by USS Voyager. Who's society is based on the hunt of prey, the prey being anyone they encounter.  The more worthy the prey the better. Claiming trophies to show the kill, and the more trophies you have, the higher your standing in their order. 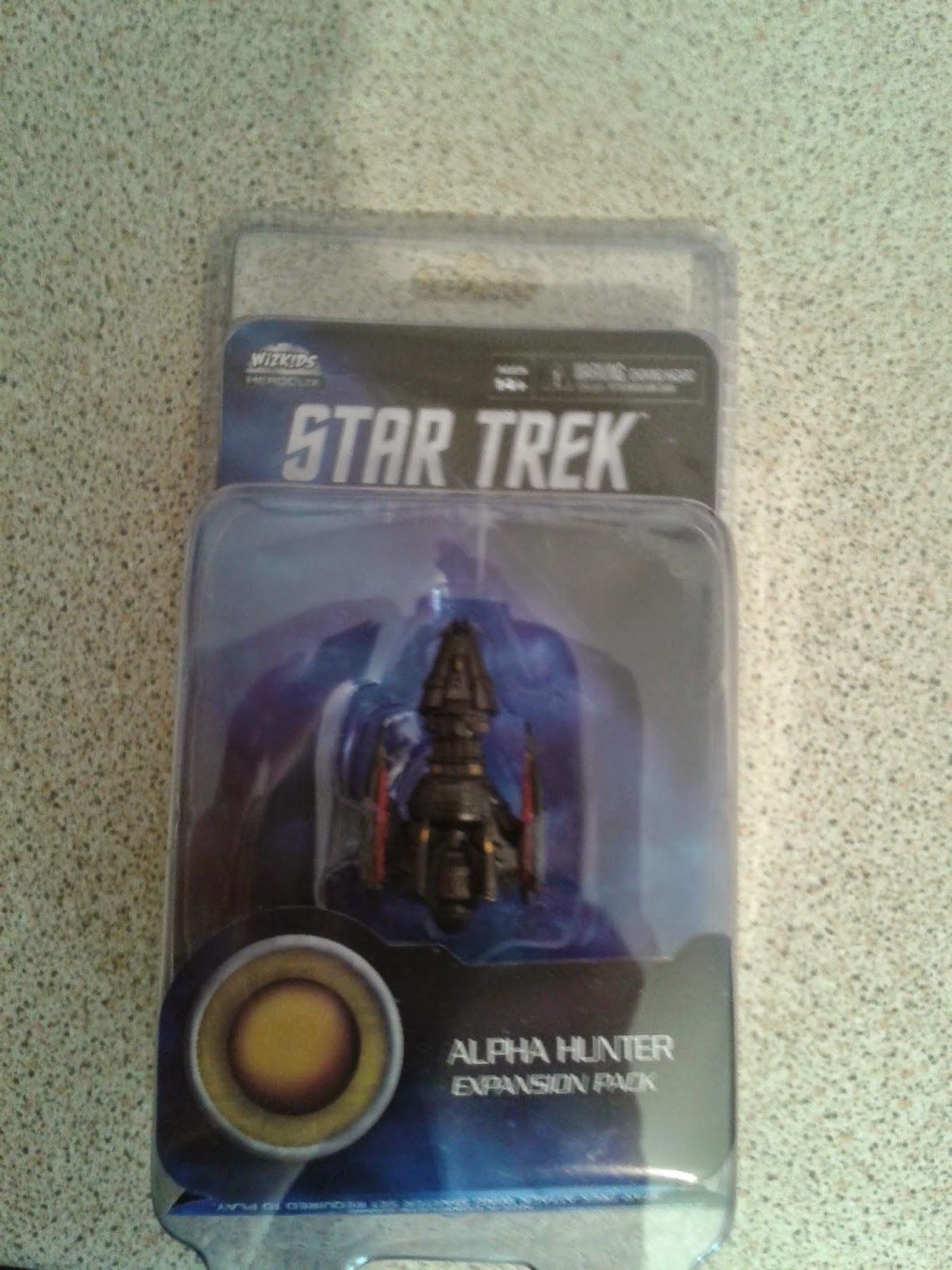 Time to see whats in the box


As always the nice slab of card goodness 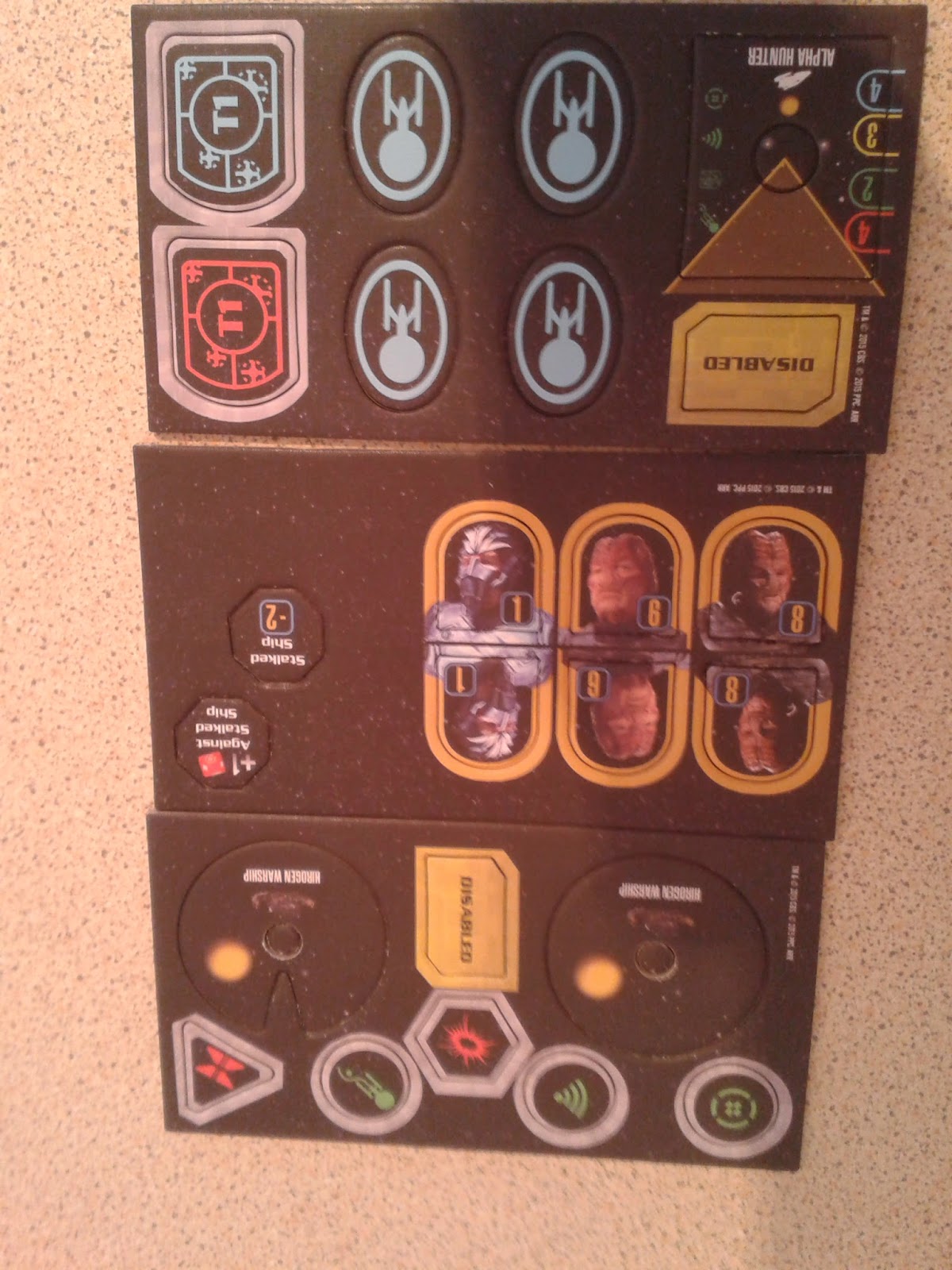 The little reminder tokens are a nice touch to help with the ability's on cards.  And this ship comes with some great cards! 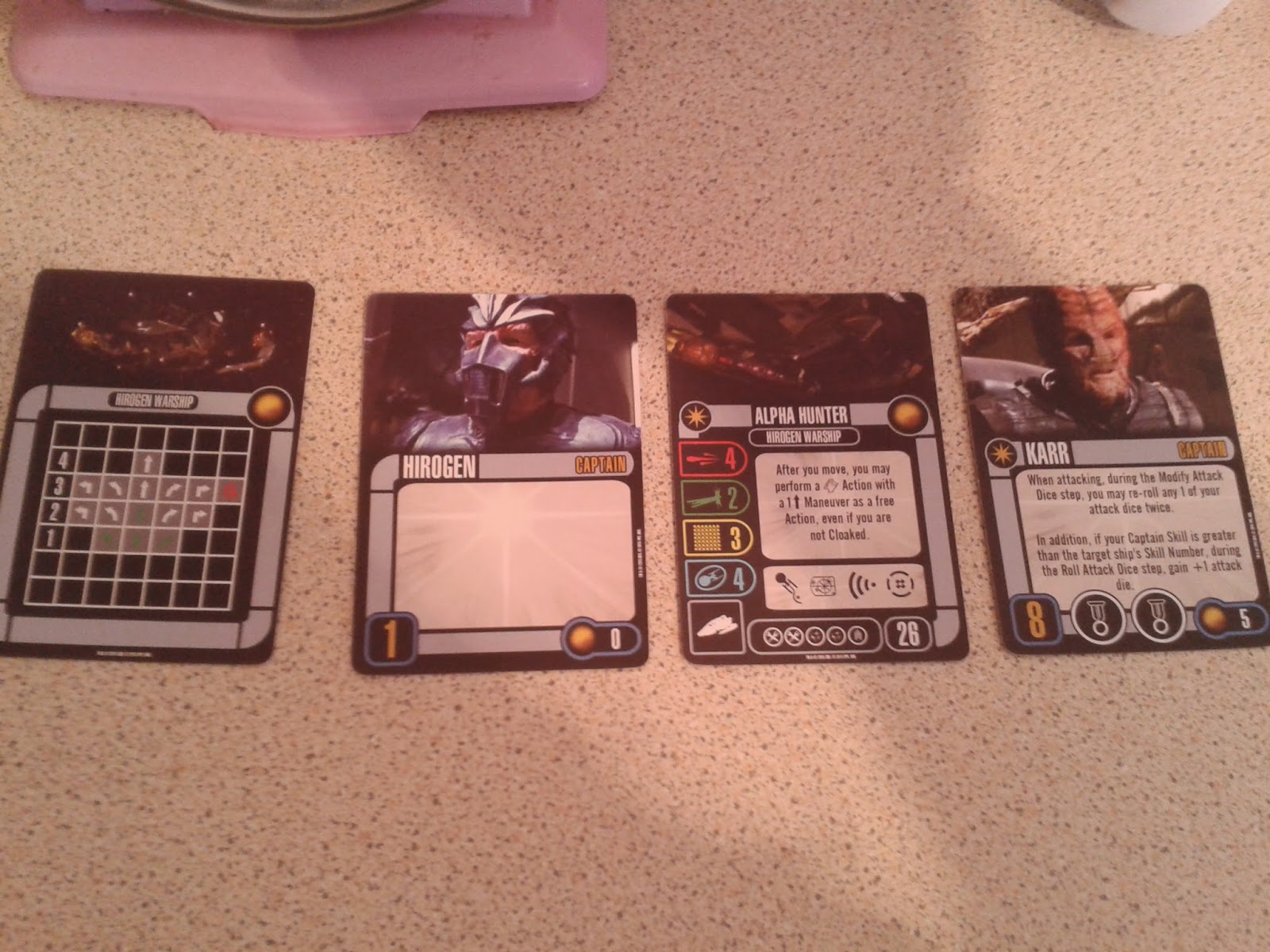 A solid manouever set means this ship can stay in the mix.  As always a generic free captain.  The named ship the Alpha hunter has a great natural ability to allow you to sensor echo as a free action. which makes this a mobile ship.  Karr is a solid captain with a respectable 8 skill, 2! yes 2! elite talents and he lets you re-roll an attack dice and if you have a higher captain skill roll another attack dice! and with his elite talent he can be higher then any target! and throw a bucket of dice at them. 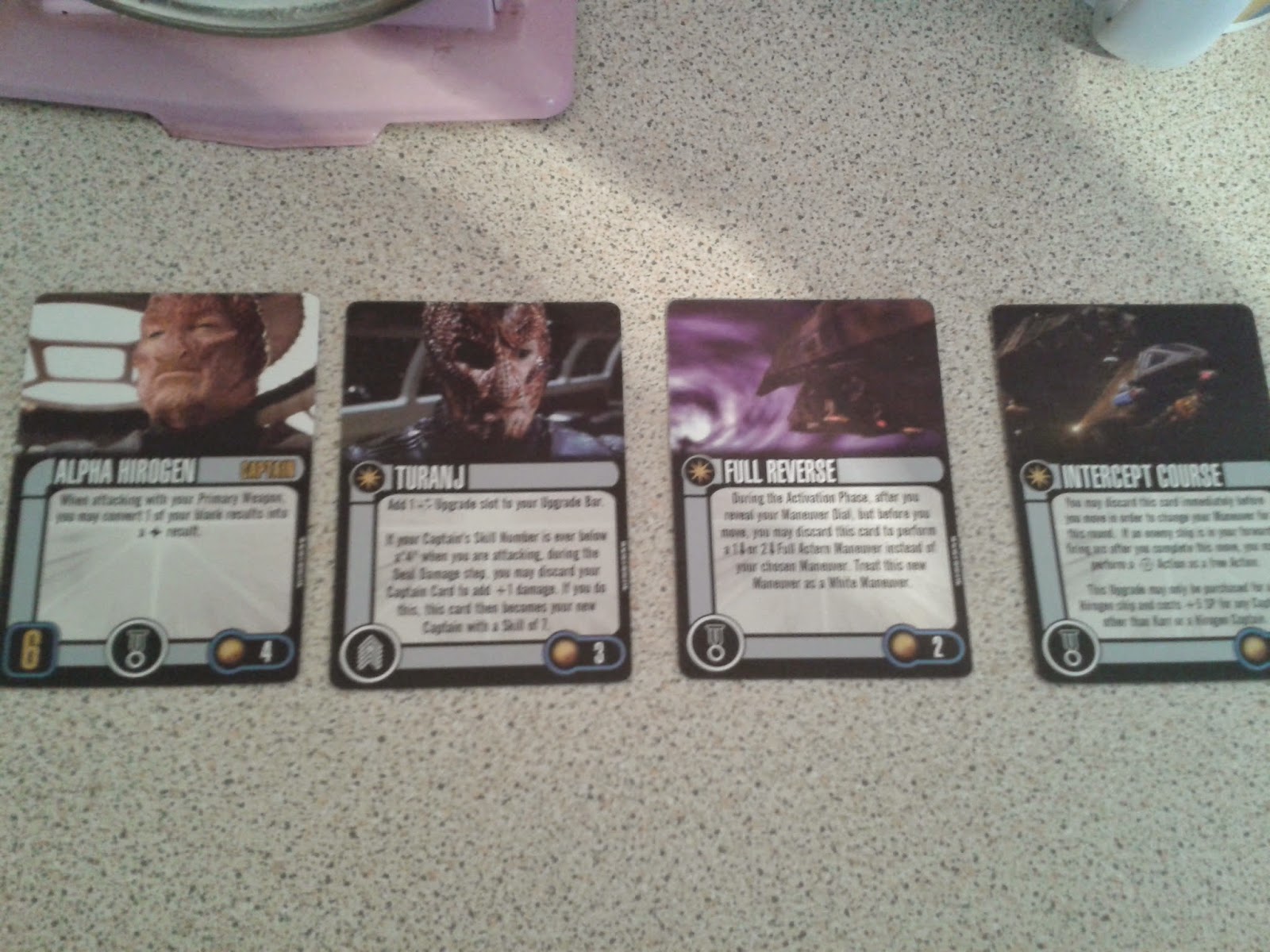 For our other captain we have the Alpha Hunter who is NOT unique so you could run multiples on ships.  he lets you change one blank into a hit.  Solid ability.  We have Turanj who can take command of the ship if something happens to drop the captains skill.  Full reverse is a great talent allowing you to back up and combined with a free sensor echo makes this ship slippery.  Intercept course is useful to change your manoeuvre and get a free battle stations too. 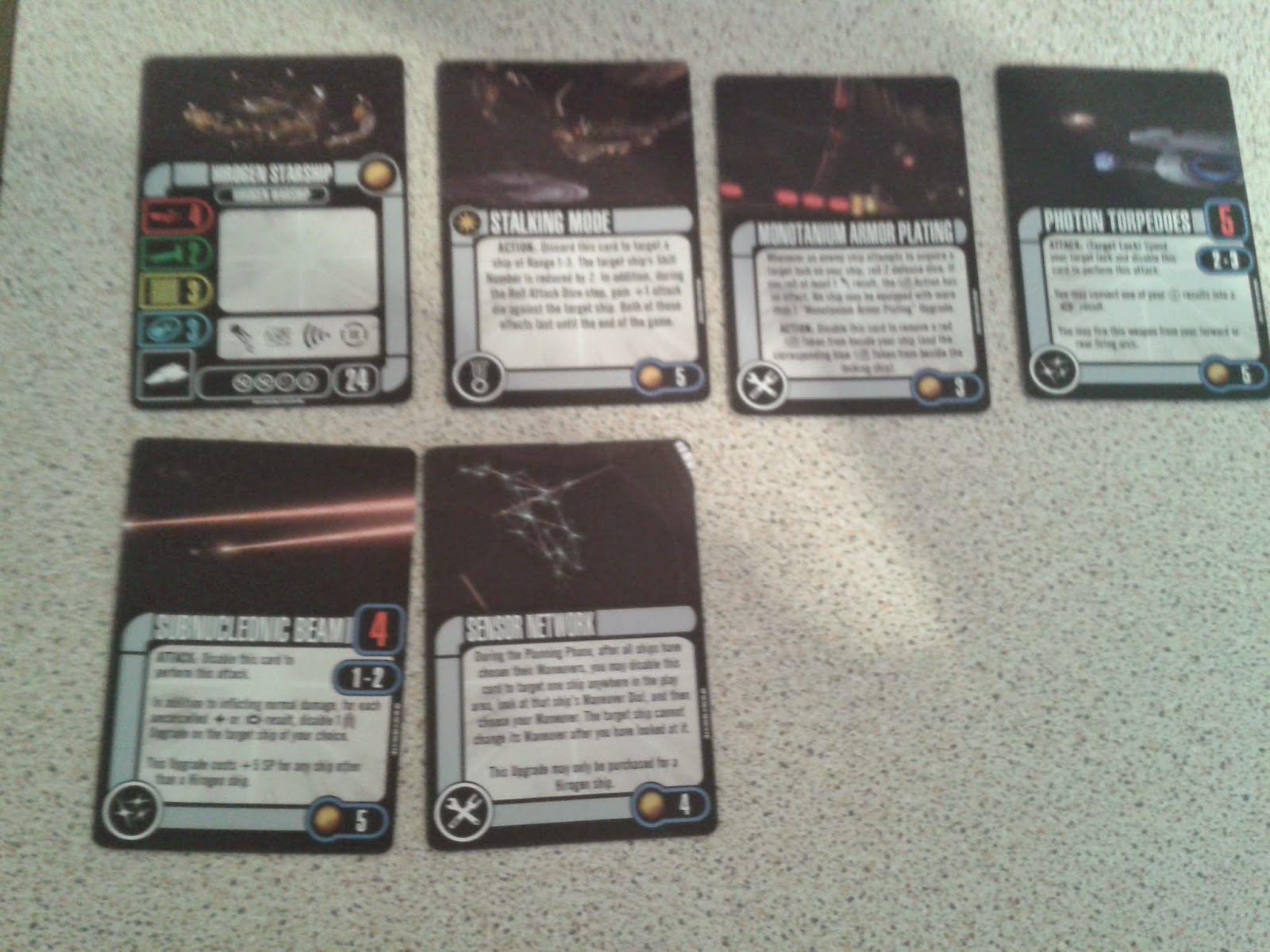 The generic ship still has some respectable firepower, you can supplement it with photon torpedoes, and the subnucleonic beam to add some punch.  for tech upgrades we have sensor network that lets you look at an opponent ships dial before you choose how you want to move.  Monotanium Armour can let you shake off target locks.  But the Star is the talent Stalking mode.  You pick a ship in range 1-3 the captain gets his skill dropped by 2 for the rest of the game, and you get an extra attack dice against them.  Combined with Karr you can throw 7 dice attacks at range one which is just unpleasant. 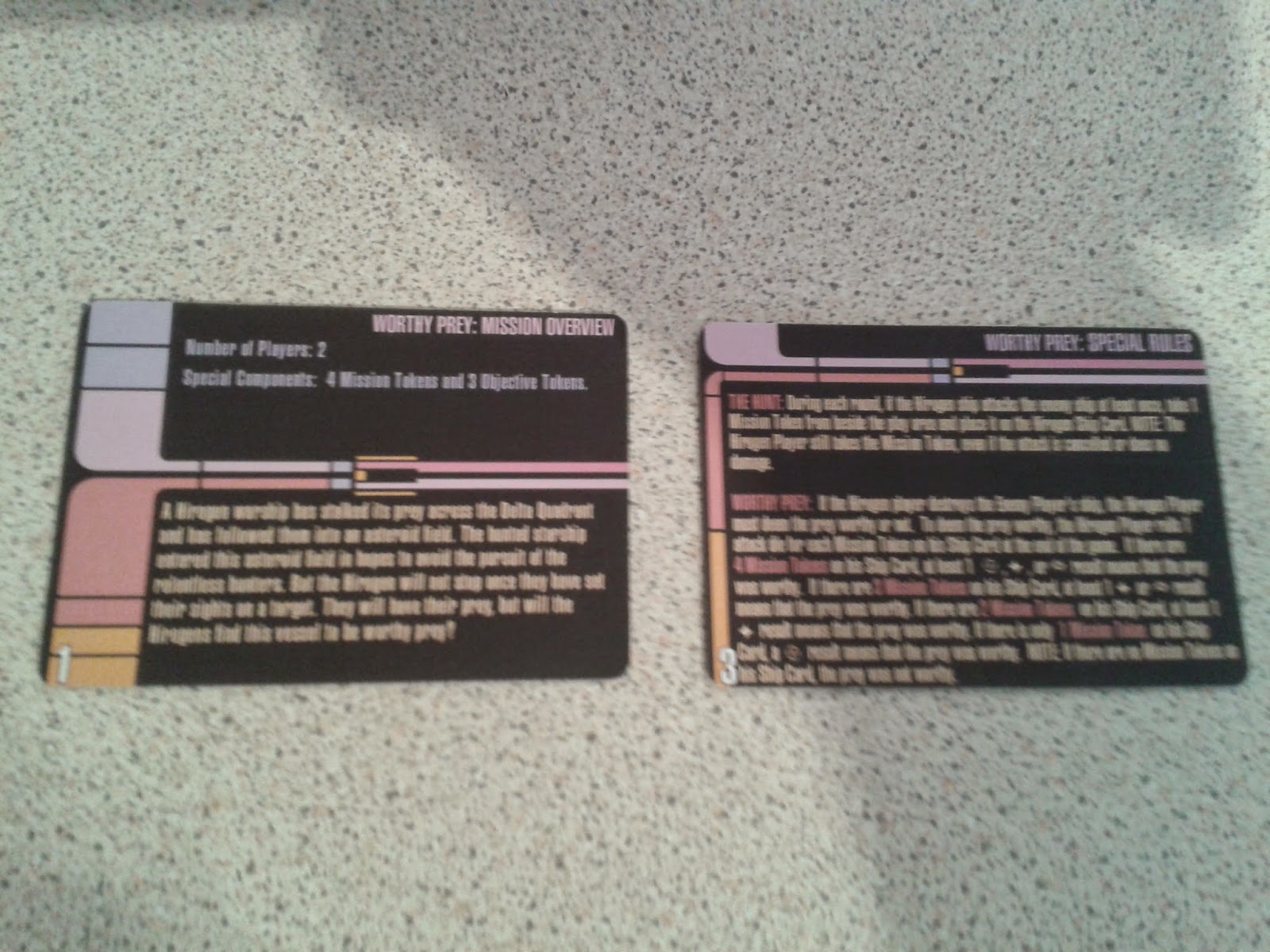 The mission is great and characterful and thematic, in fact if the ship was useless the mission alone would make this a must buy.  But the fact the cards are great, the mission is excellent and the ship looks.. well.... you shall see.  I think it is great! 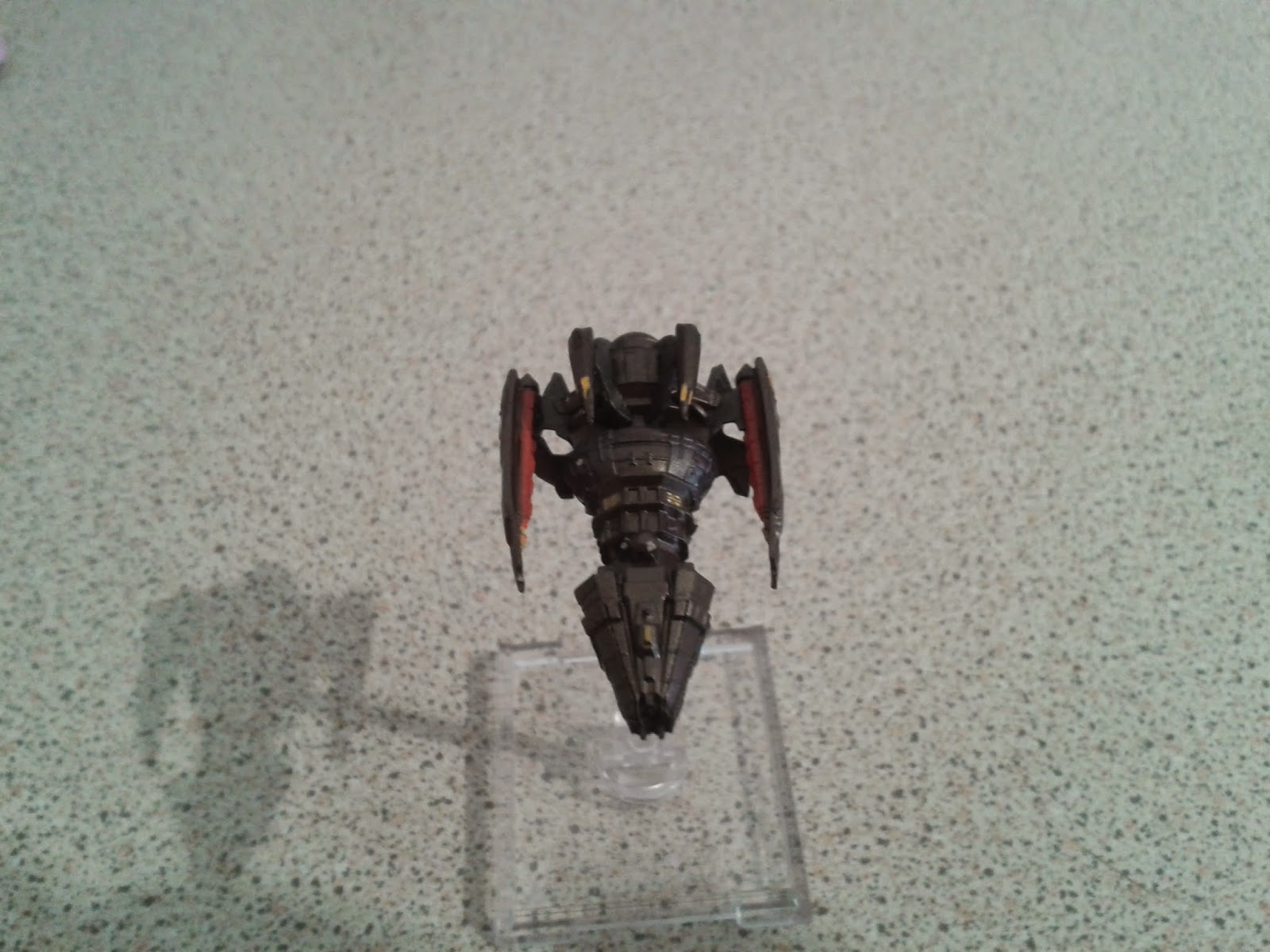 It looks great from all angles. 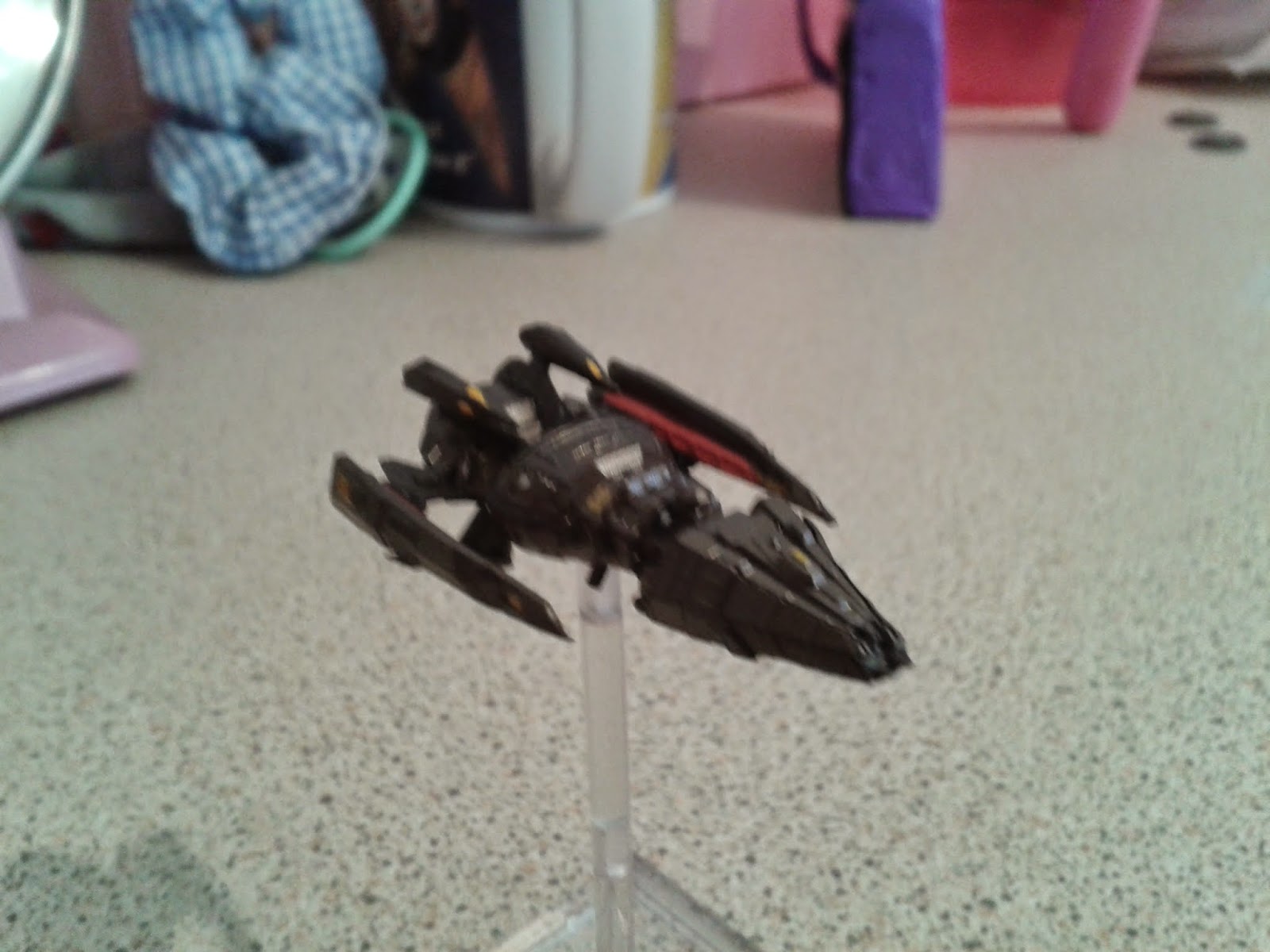 The detail and paint work have really improved from earlier models. 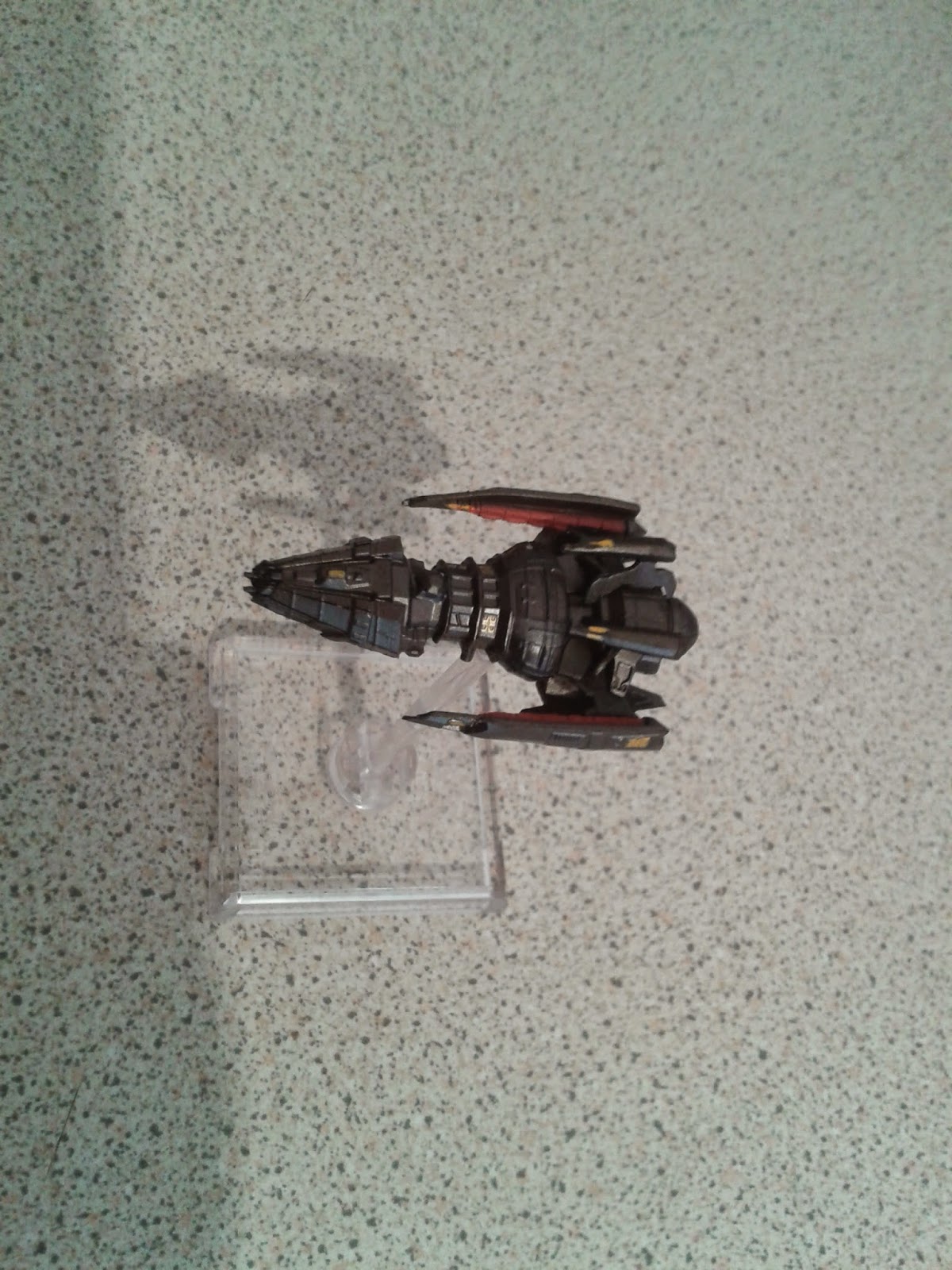 Its a menacing ship 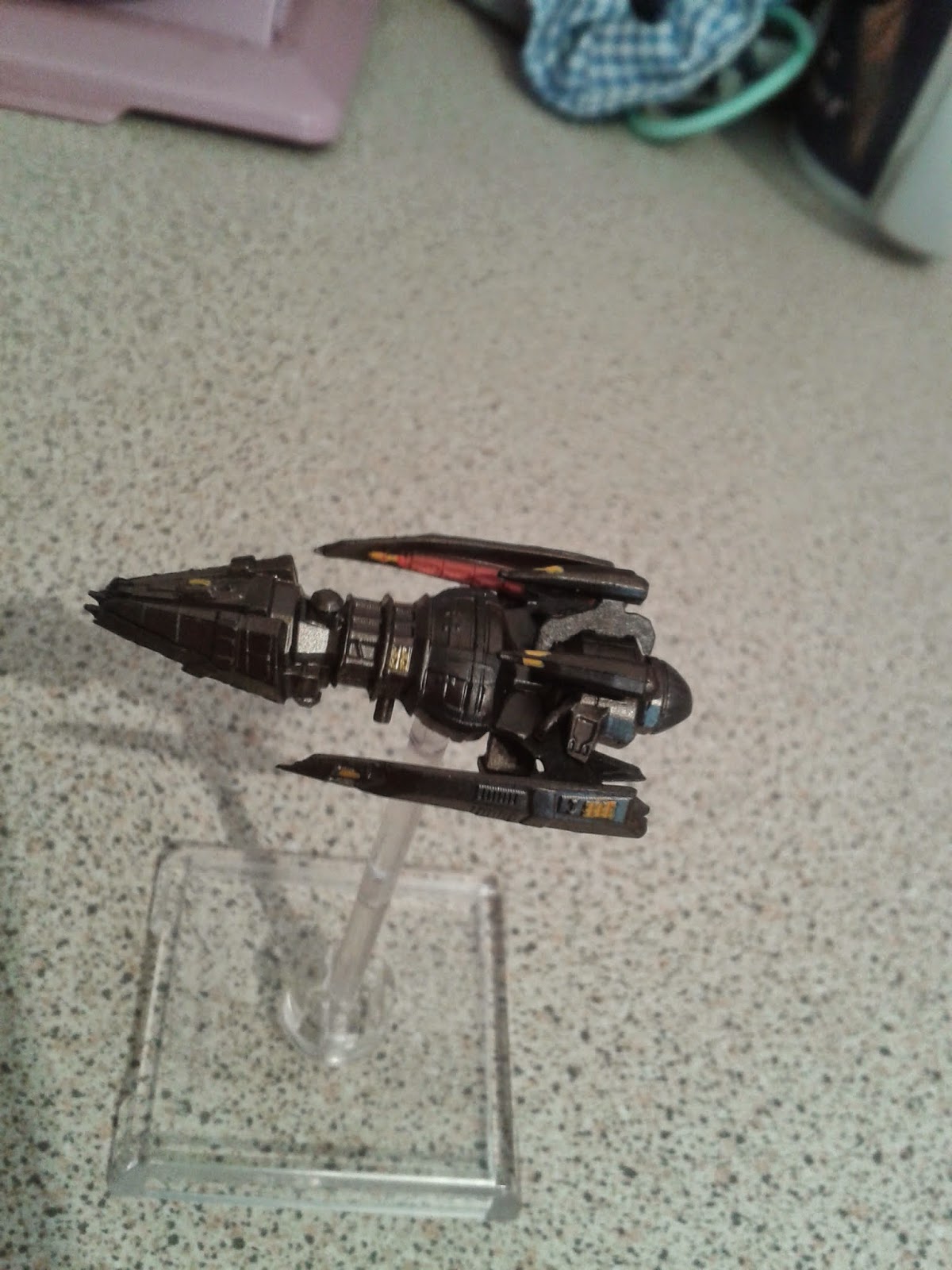 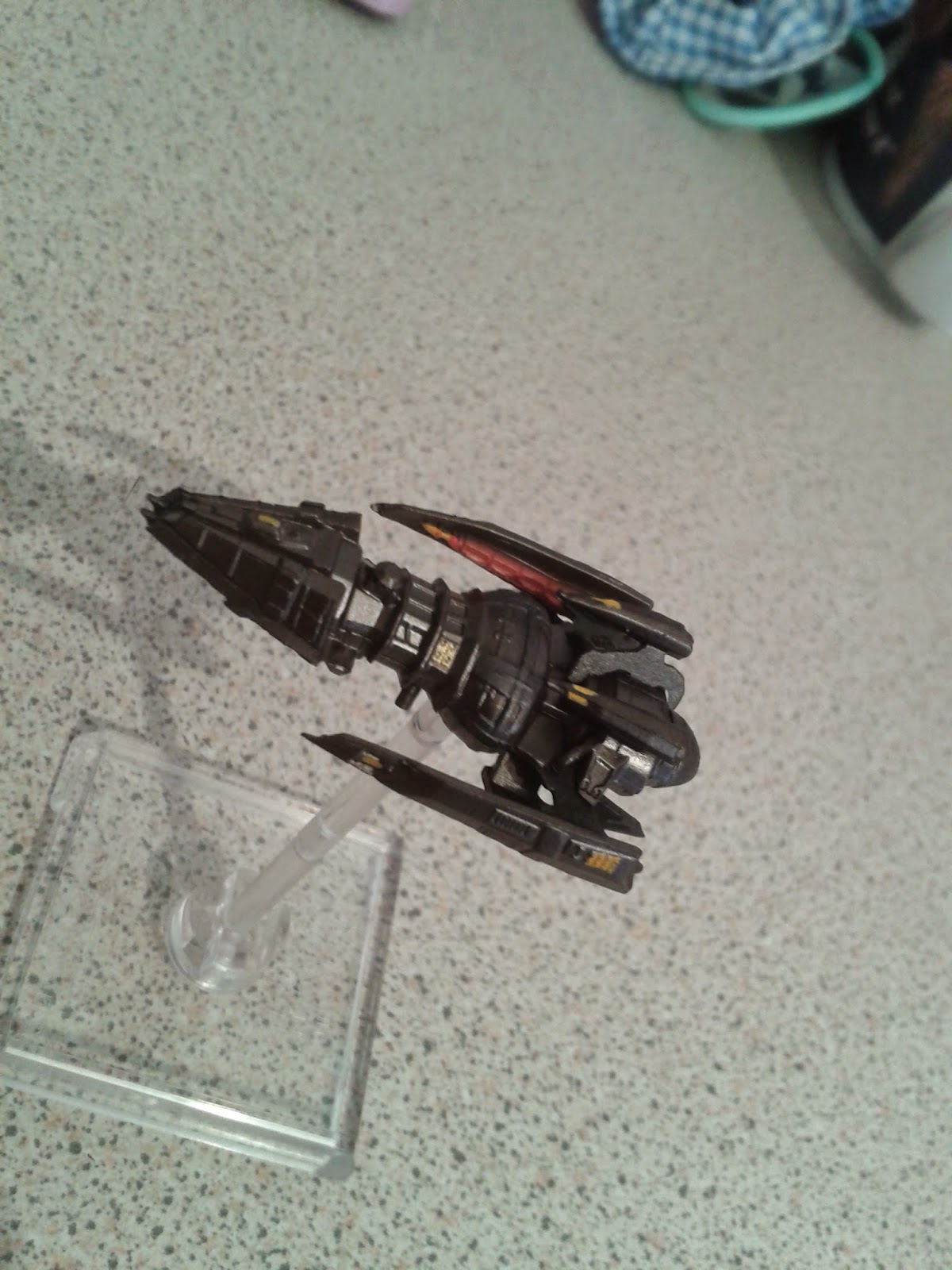 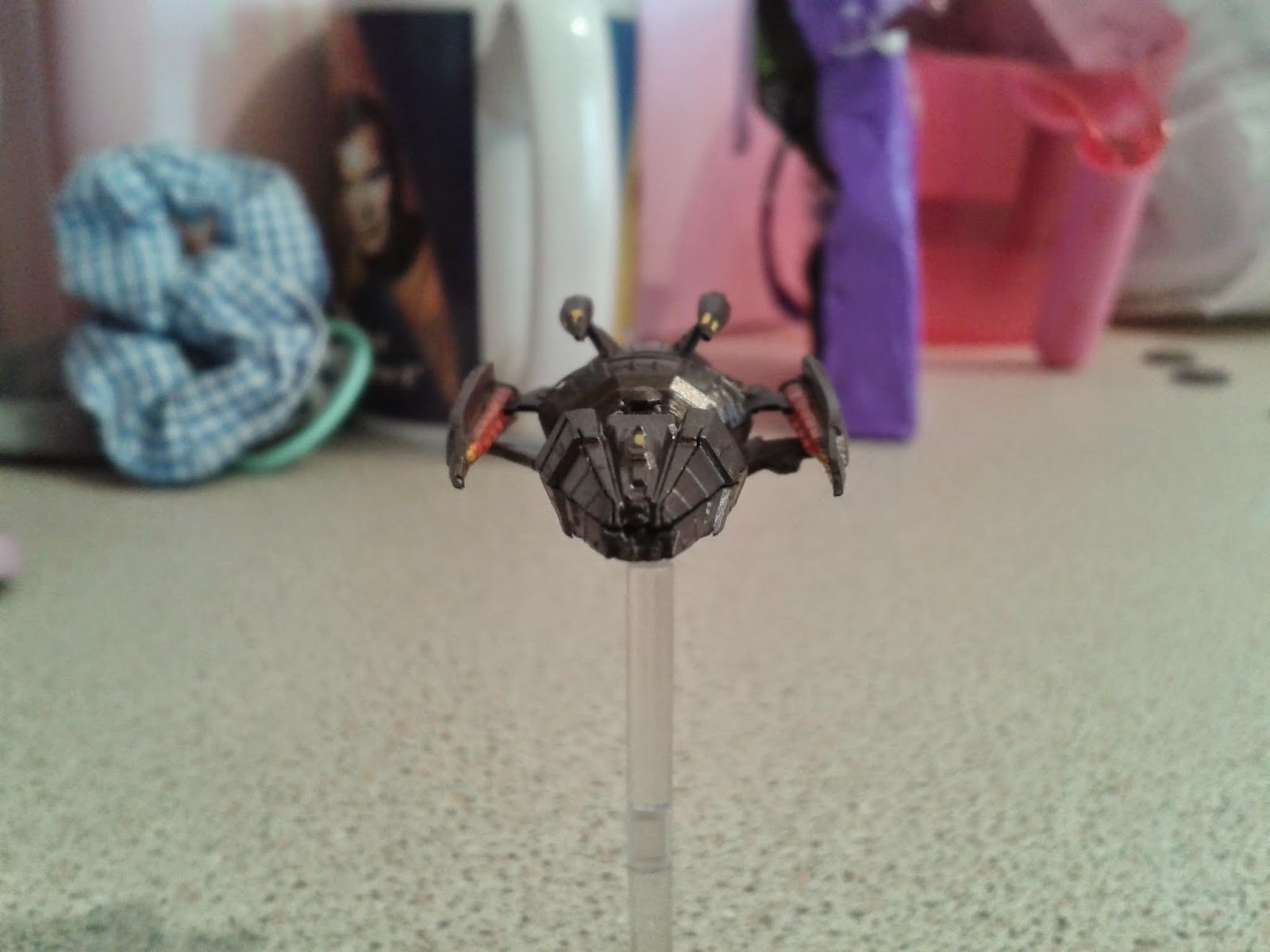 What a great ship!

A good pack with a great looking ship, some tough and fun cards, and one of the most fun mission I have played.

Stick with us for a special Saturday article coming up featuring these in action!
Labels: Attack Wing Star Trek wizkids