Well the masses have spoken, and we have delivered.  Some of our loyal readers stated they wanted to see battle reports so here is our first one.

Featuring me and my friend Pete playing a 100pt game of Attack Wing.  First lets take a look at the fleets that went up against each other.

Being a fan of the feds I took the Federation.  my first ship being a Generic old Constitution class with a free captain and Miles on board as I had a free 2 points, and thought he could come in handy. 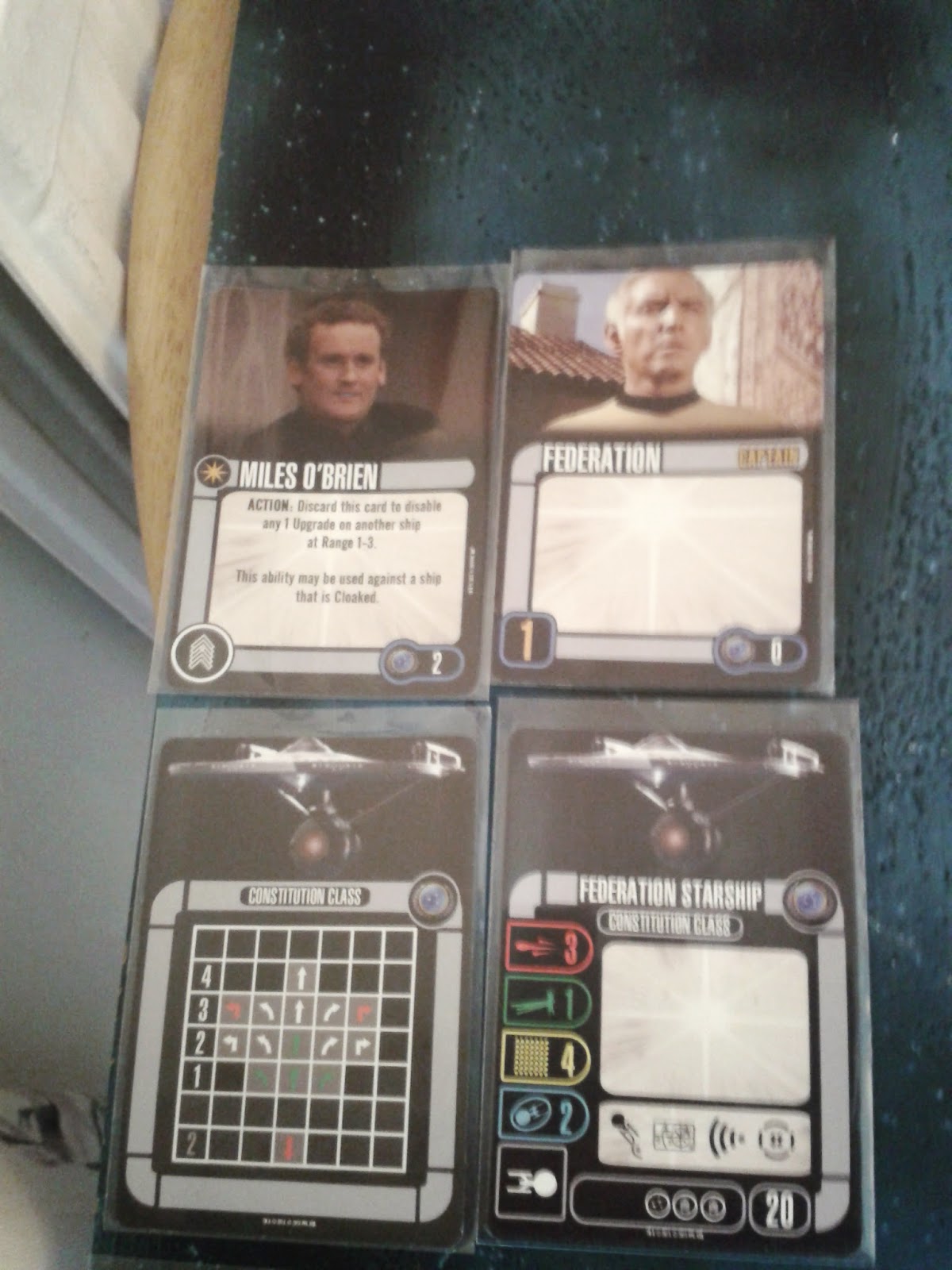 Next up came USS Voyager, with a free captain to save points, and Tom Paris to upgrade its manoeuvrability. 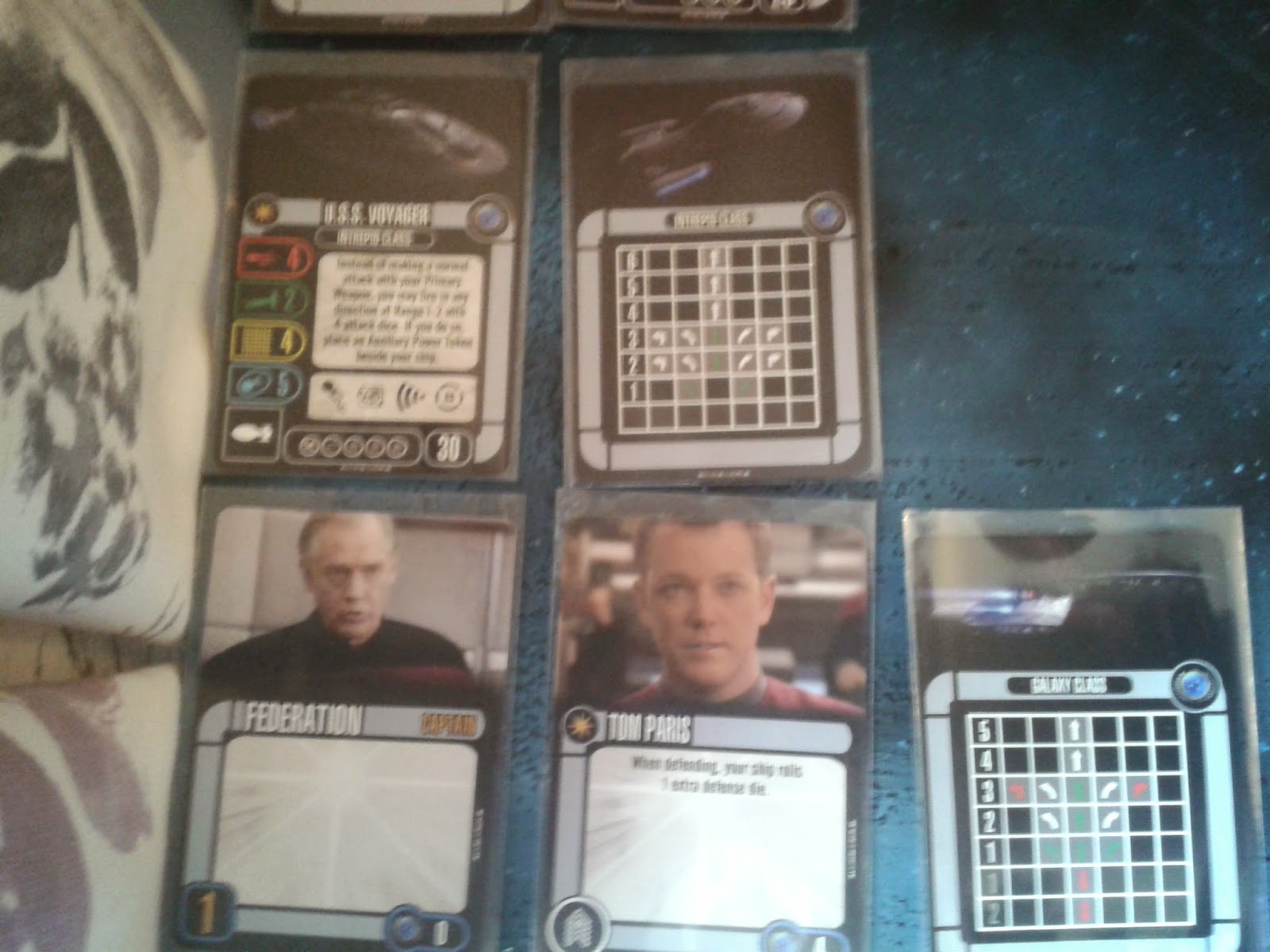 Rounding off the fleet was my "Flagship" the USS Enterprise D with captain Picard, Photon Torpedoes and antimatter mines (as I have not tried them yet) 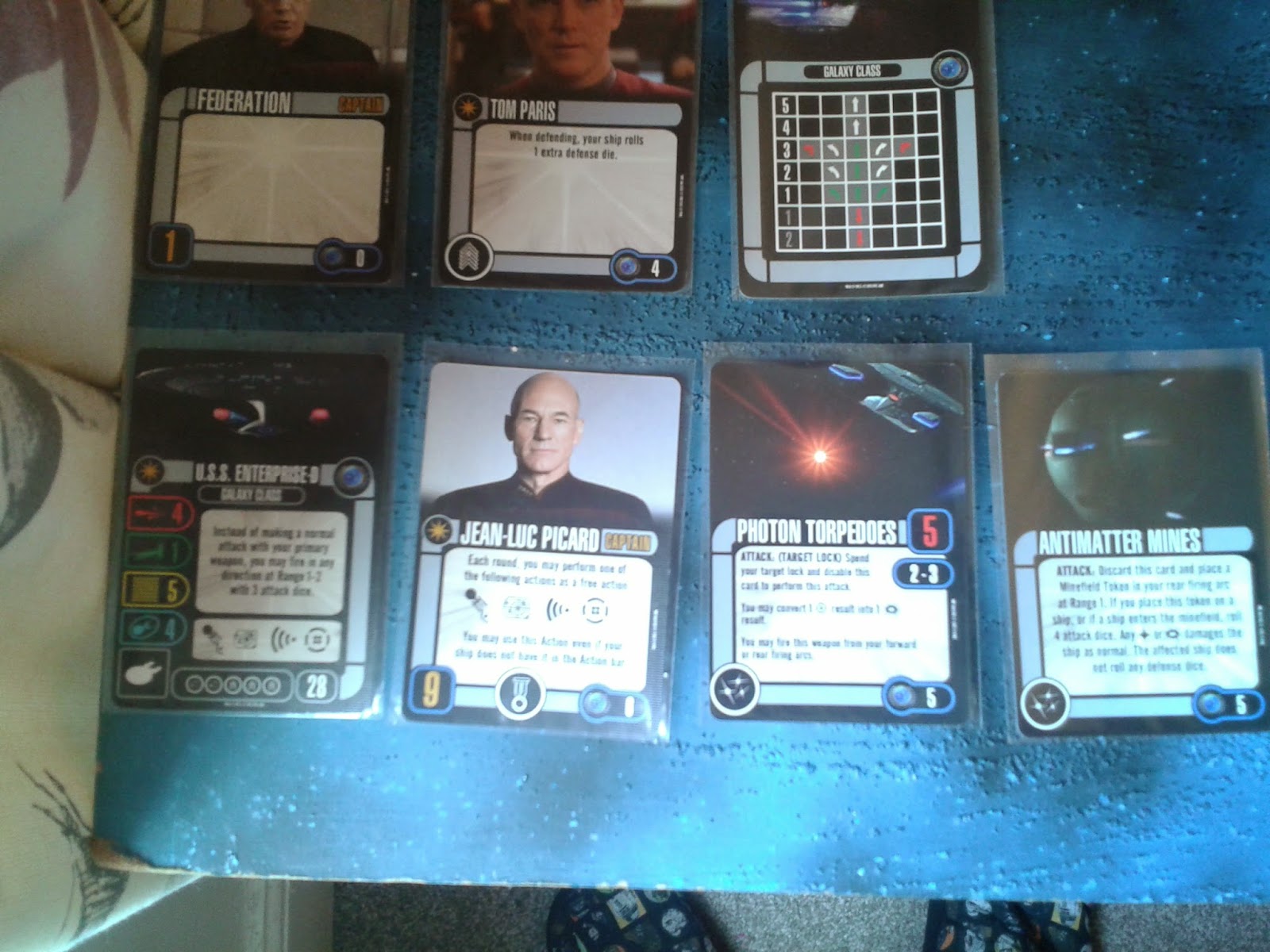 opposing the Federations finest (and some random guys) was Pete and a pair of tooled up Hirogen hunter ships. 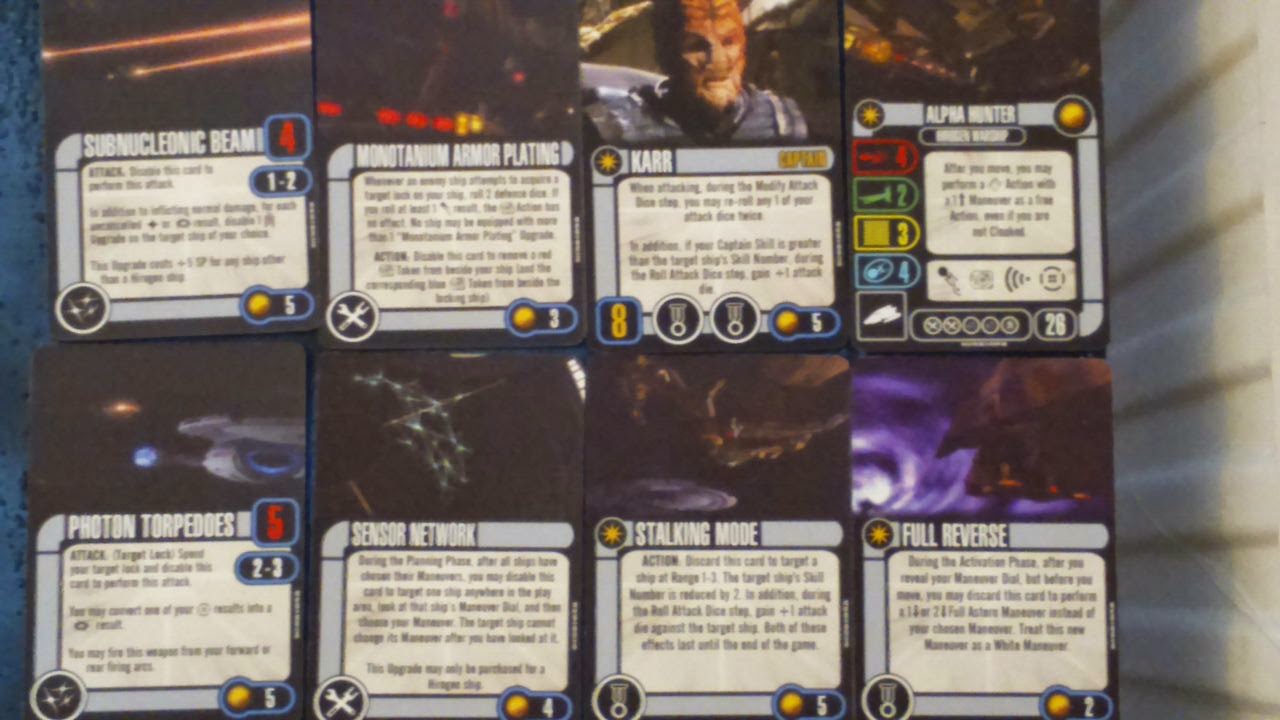 A terrifying build with Karr, the named ship and ALL the toys.
and another Alpha hunter ship 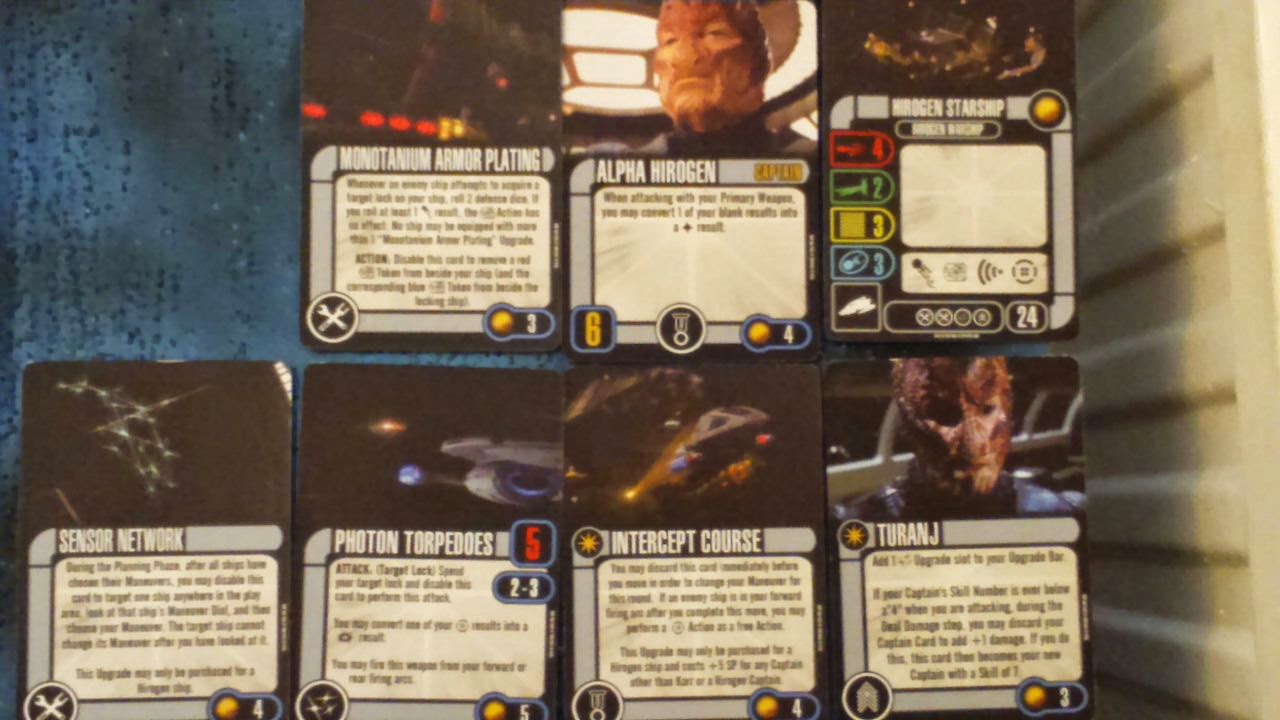 2 light equipped ships against 2 tooled up ships.  This would be interesting. 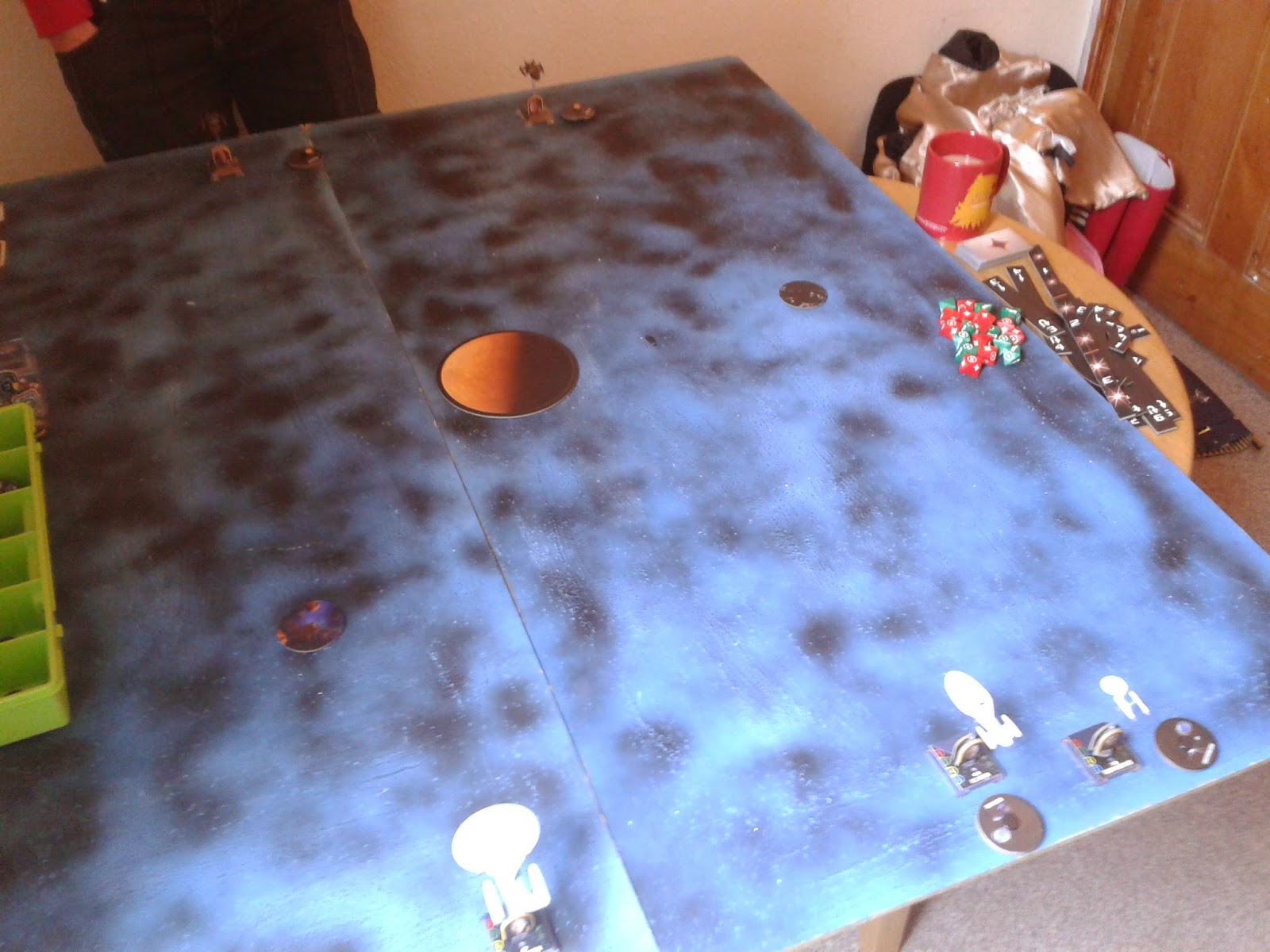 We set up the board with a planet in the middle, and 2 obstacle tokens literally chucked down at random.  We used them as you could shoot through them, but if you hit them or moved through them you rolled a dice for potential damage, and caused an obstruction for shooting giving he defending ship an extra green dice if shot through them.
The planet was a full obstruction, you could not shoot through it, or move over onto it, though if your move could clear the planet you could go over it.

The 3 ships set up to face the Hirogen threat, the Voyager and the constitution on the right flank, and the Enterprise on the left flank. 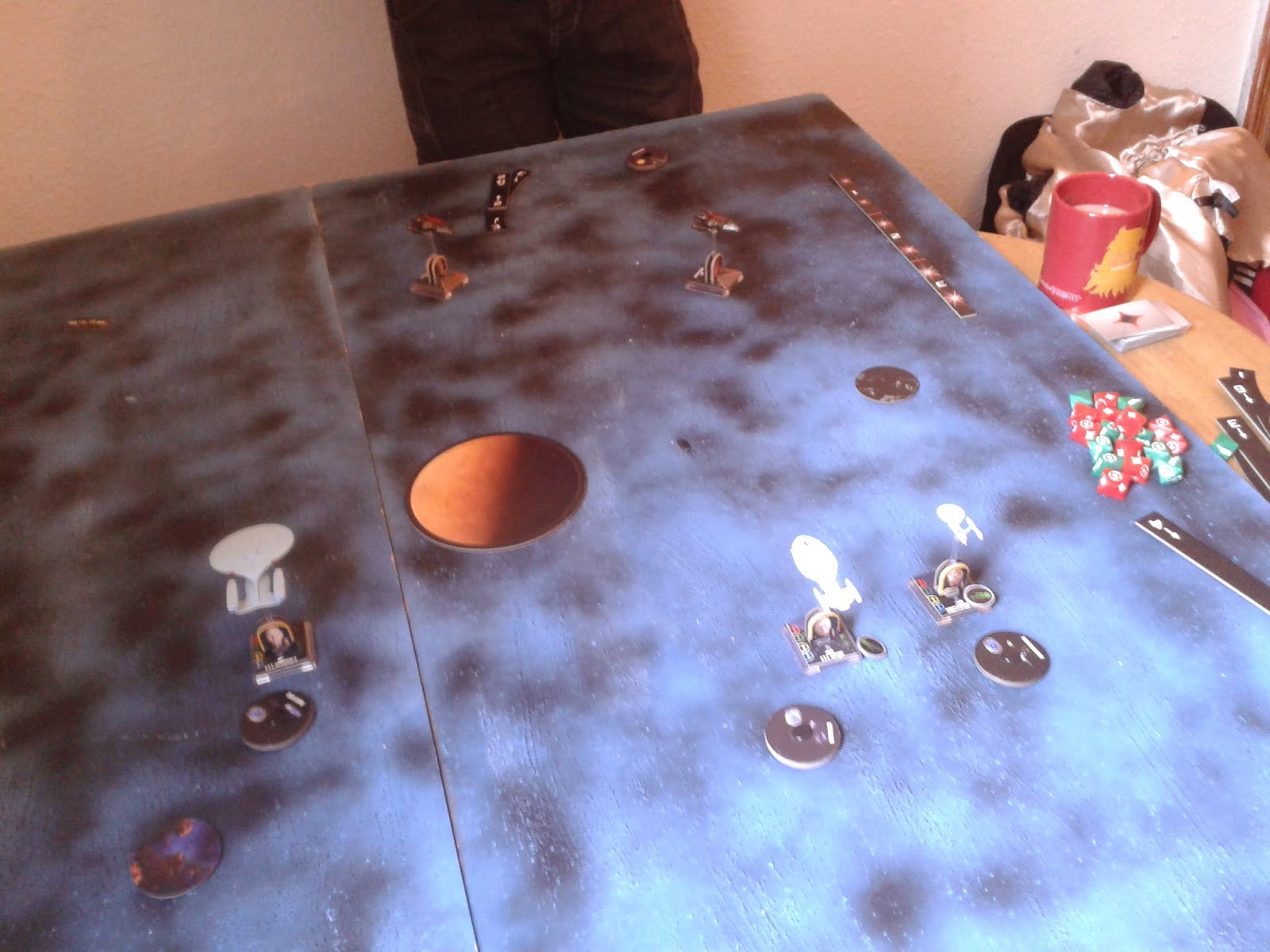 The Federation ships move forward to engage the enemy 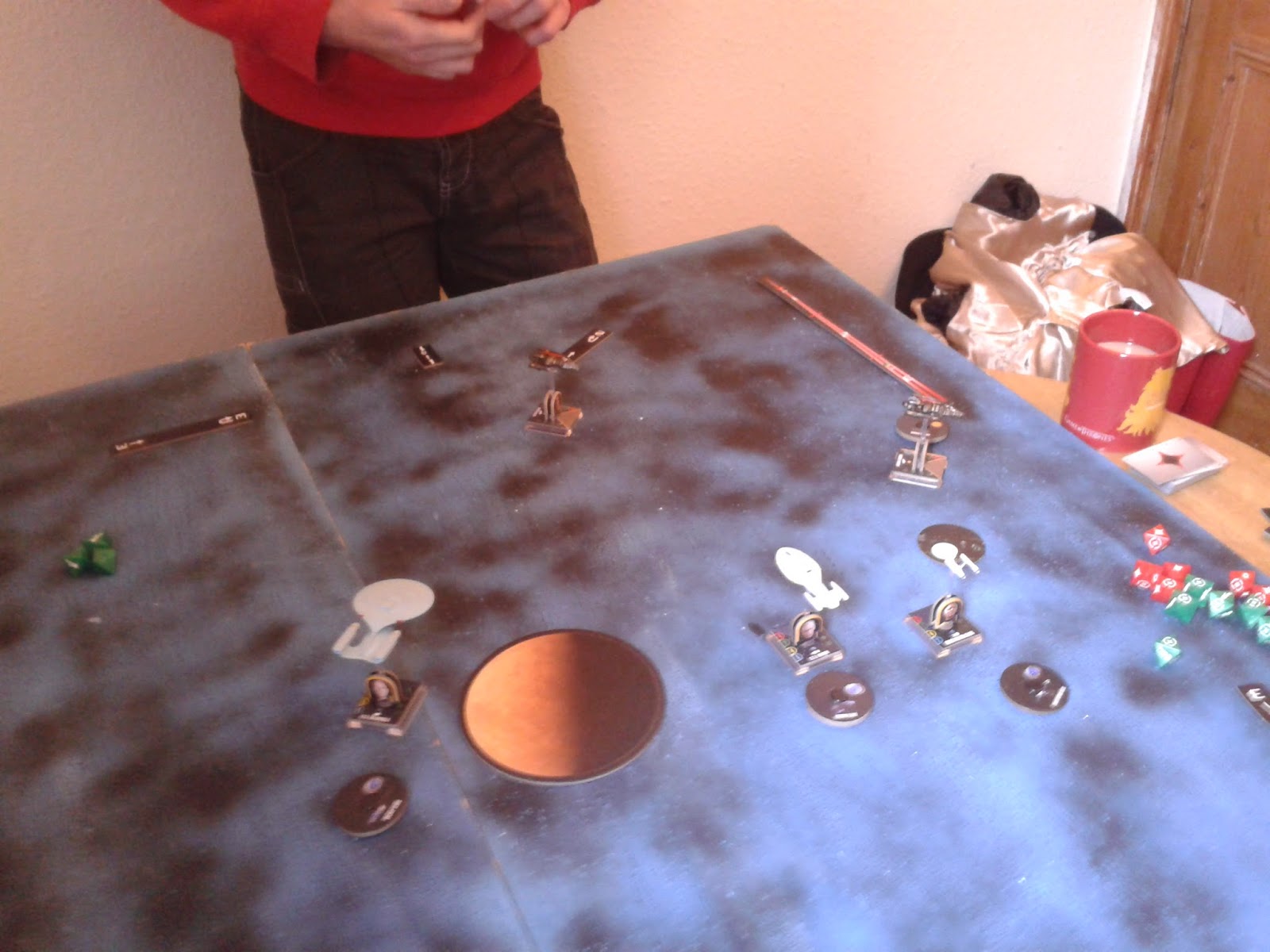 The Hirogen dart across to one flank splitting the Federation fleet. 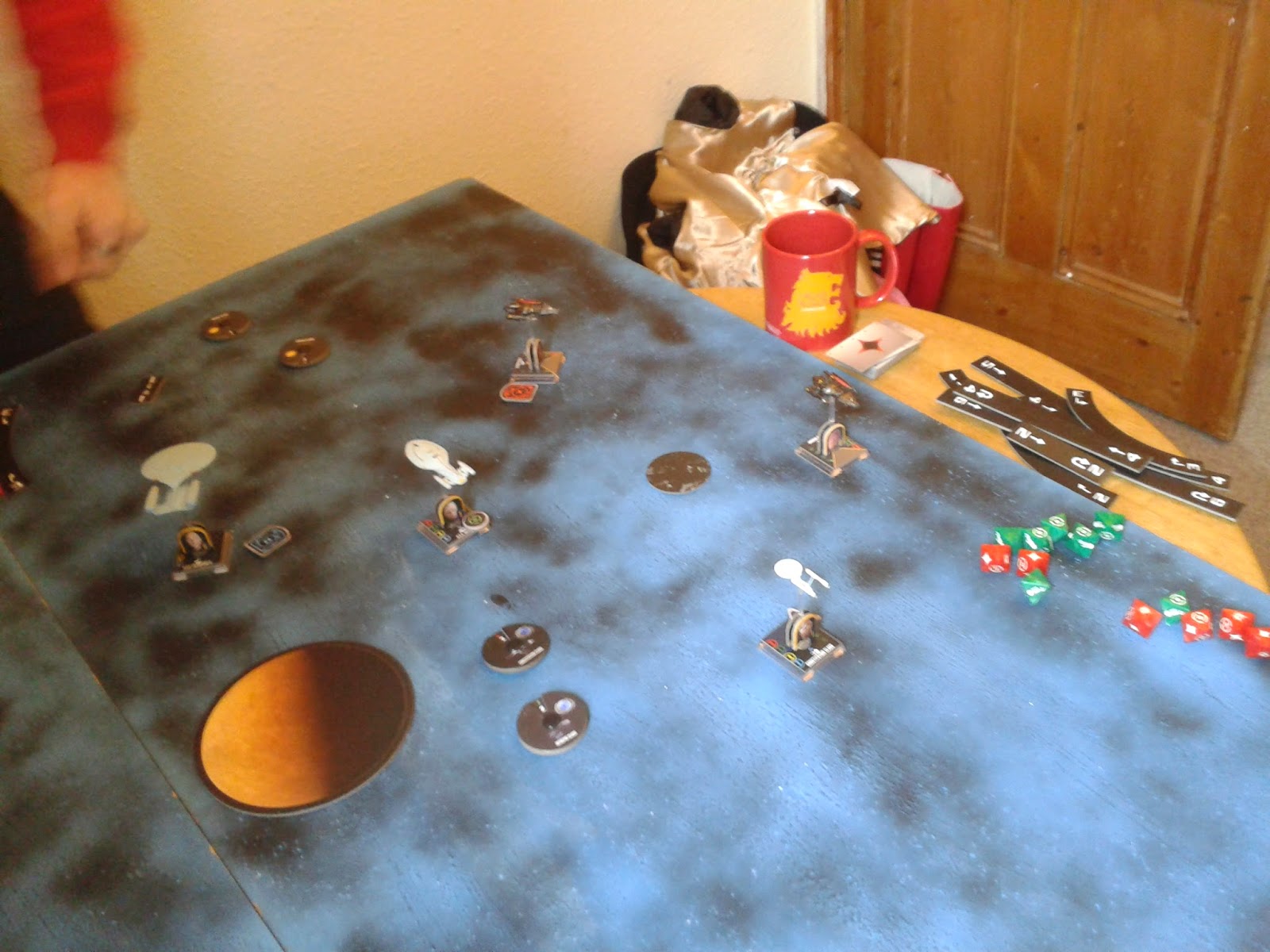 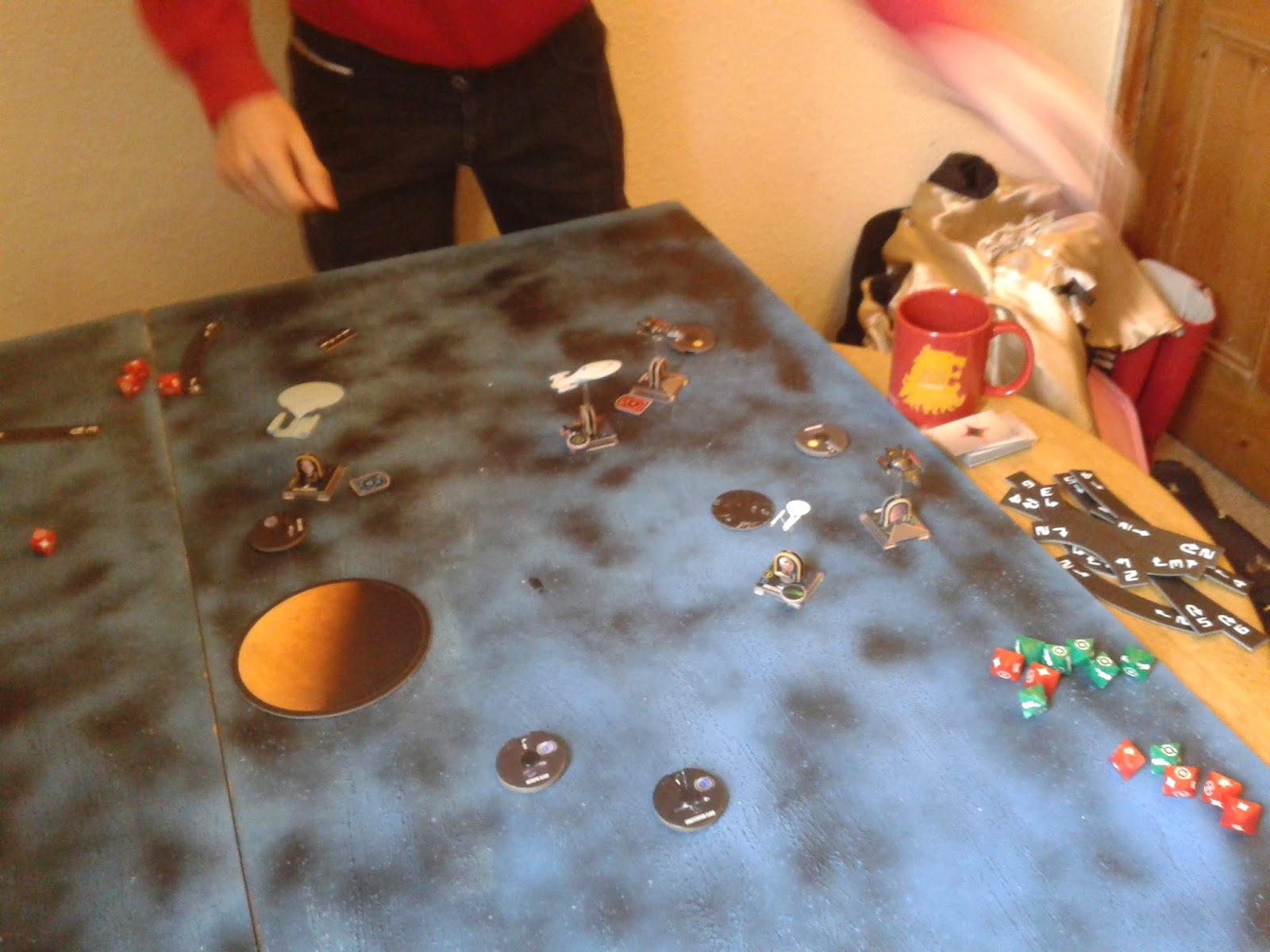 The Enterprise slowly turns towards the action, the voyager swings around to engage the Alpha Hunter whilst the constitution outgunned and outmatched turns bravely towards Karrs ship to bring her guns to bear.
voyager and the Alpha hunter exchange fire 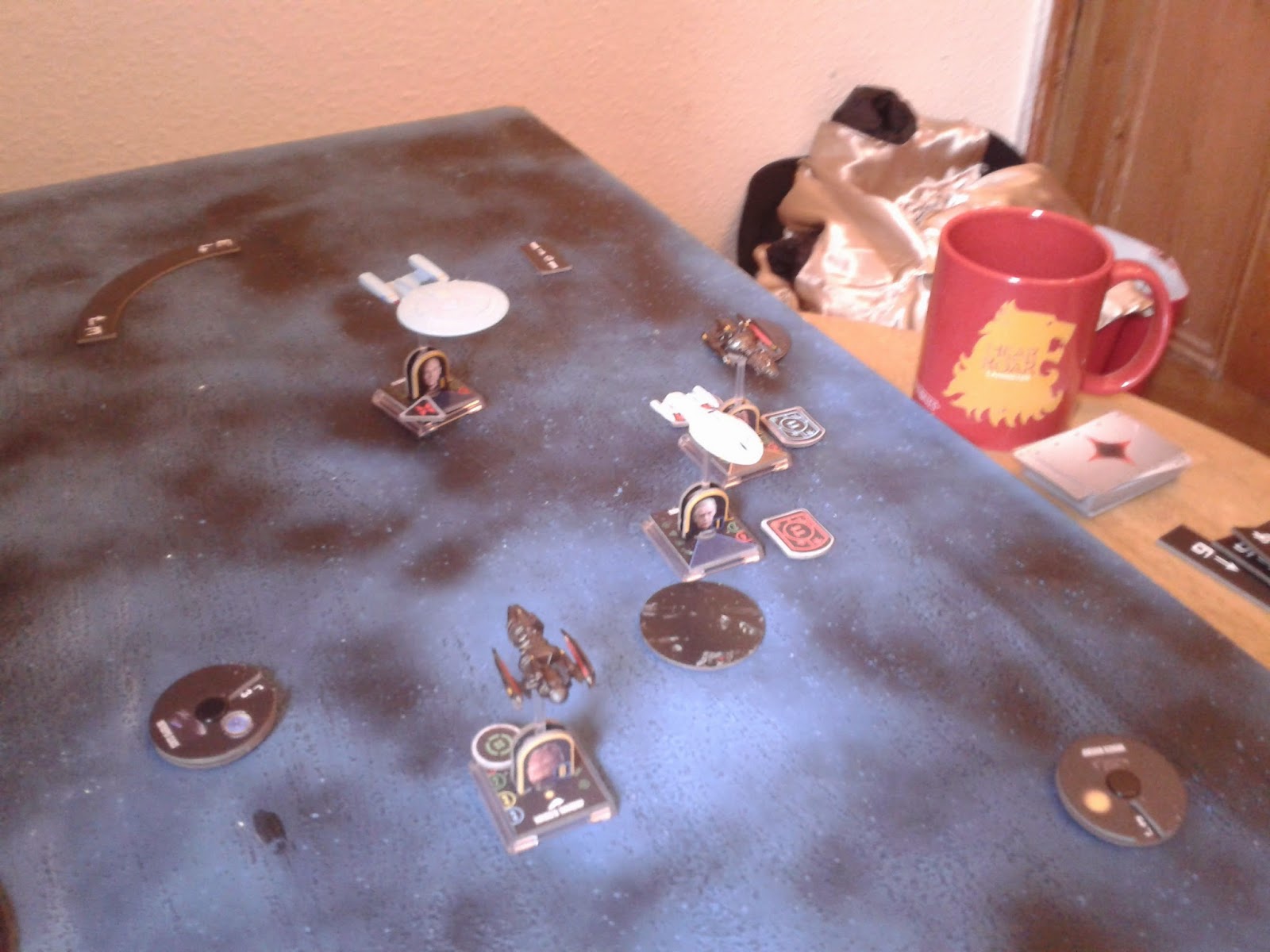 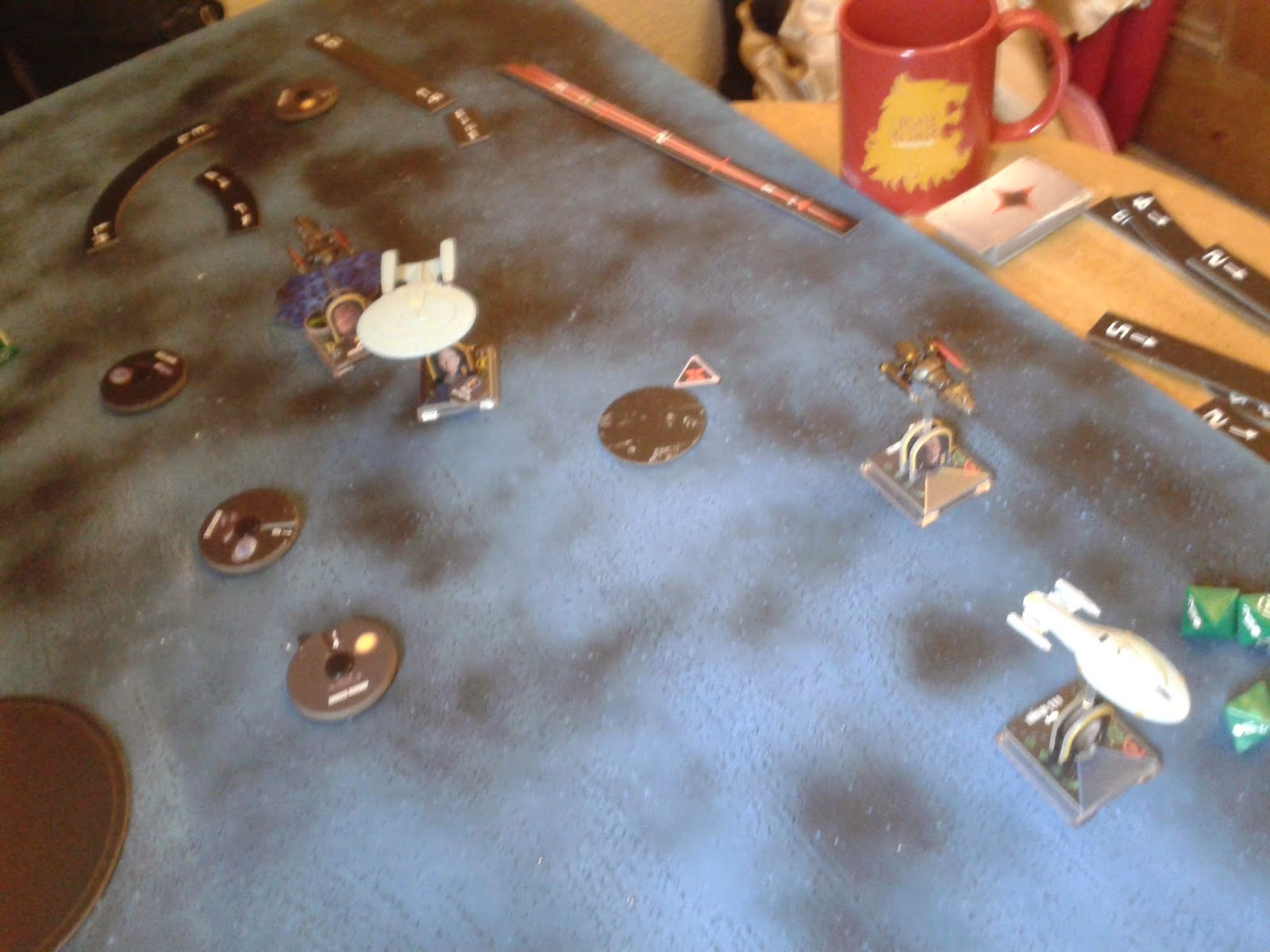 Karr chases down the voyager using stalking mode to maximise firepower against the ship.
Picard swings the enterprise around and drops a minefield out the back that the alpha Hunter has no choice but to fly through and take damage. 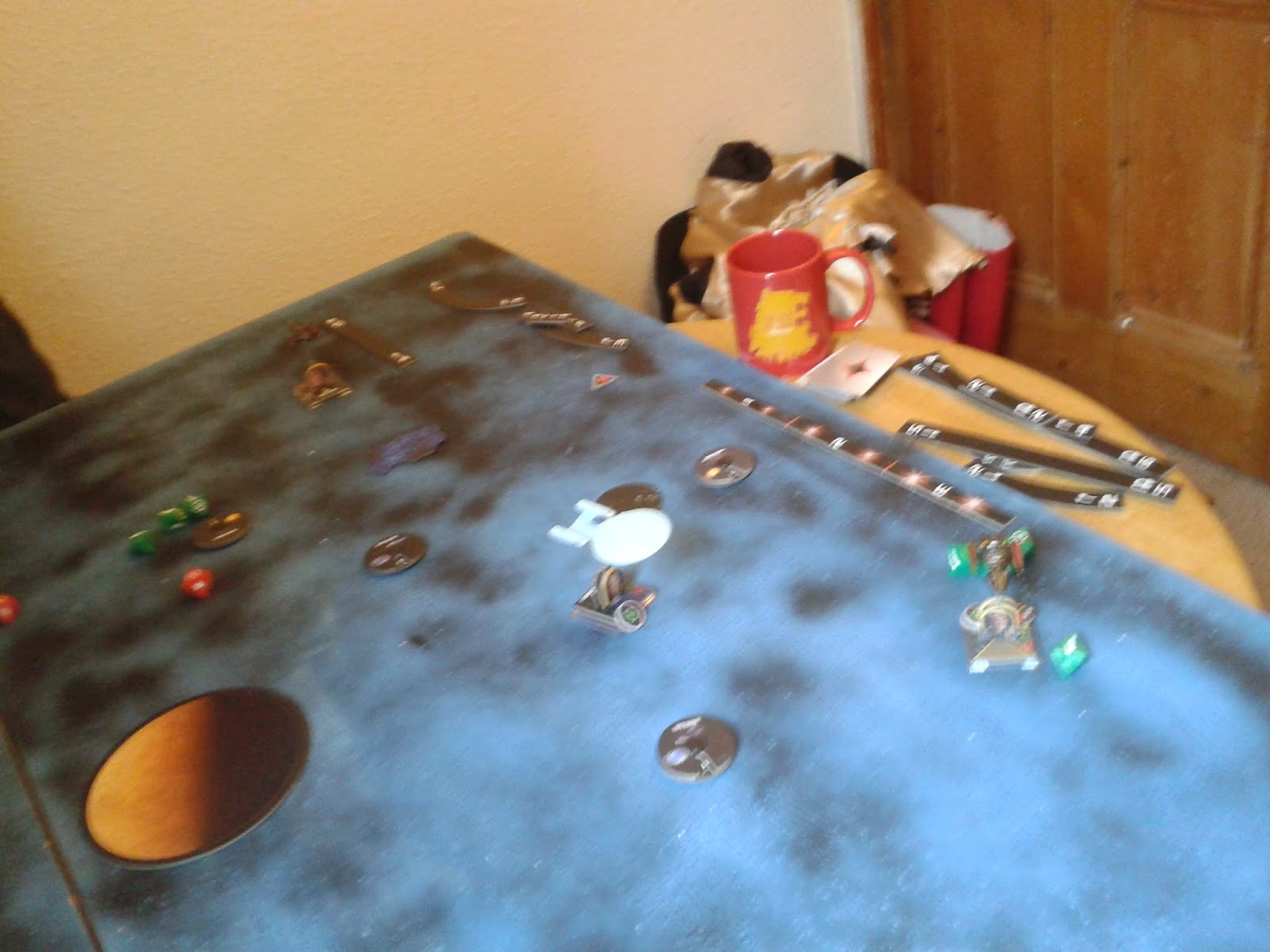 The Alpha Hunter takes sever damage from the minefield and begins to turn to join the action again.  Karr destroys voyager but has taken a few hits on the way.
Picard brings the Enterprise in and fires taking down Karr. 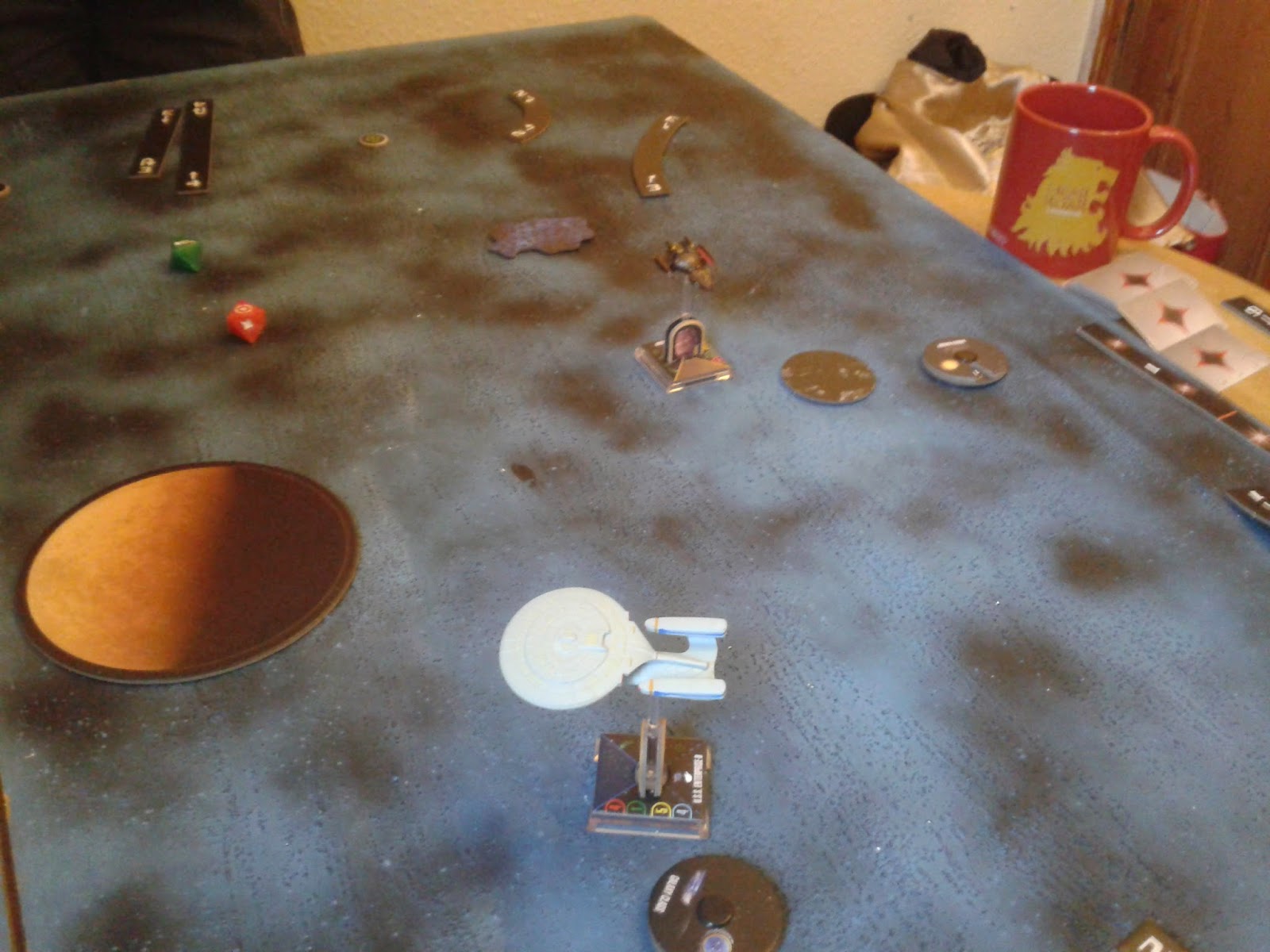 The alpha hunter swings down and the enterprise comes about using her 360 firing arc special ability to deliver the killing blow.

A slim Federation victory! hard fought and costly.  The Hirogen ships where brutal and manoeuvrable,  packing solid firepower they where easily able to stick on voyagers tail and pound it. The mines proved really useful in hurting the enemy and breaking up the pursuit.  For the Federation the Enterprise was the Hero of the day, but it was a tight battle.

Pete says....The Hirogen are strong and fast, but cant stand up to a slugfest.  Which is what the Enterprise did with them.

A great fun battle, close and tight as a good game should be.  The Hirogen where truly frightening foes and a worthy foe on the table