On the Hobby Desk

Happy Wednesday, all :) I have quite a few projects going on now that packages have arrived. Still one more in the post, but more on that when it arrives... 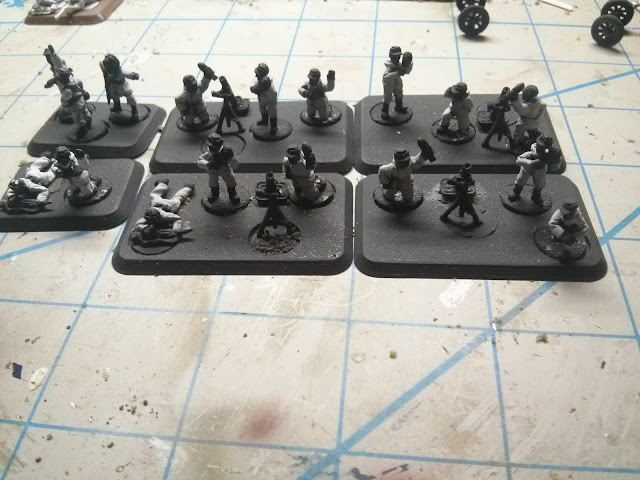 Some Finnish mortars. I was really impressed with how useful four mortars firing a smoke bombardment was in my last FoW game. Two artillery templates, and I effectively get 4 dice instead of 3 to Range In? Yes please. The plan is to paint these guys up and then base them with spackle and snow flock. We'll see how it goes. 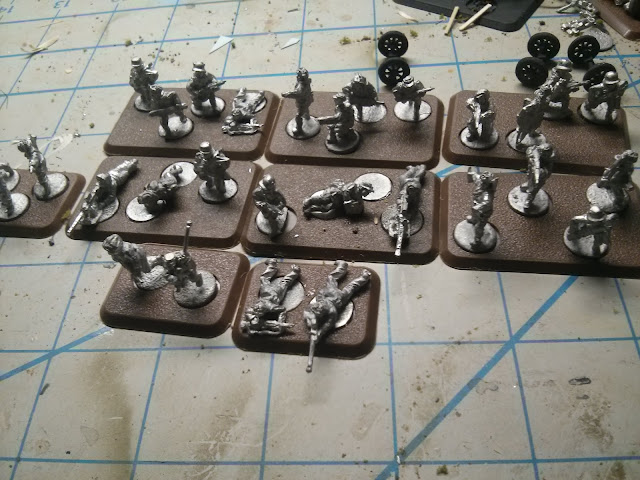 Finnish anti-tank teams! Very handy, if anything they can lay some hurt down on infantry with their ROF 3. Blam blam blam, stay back Rooskie! 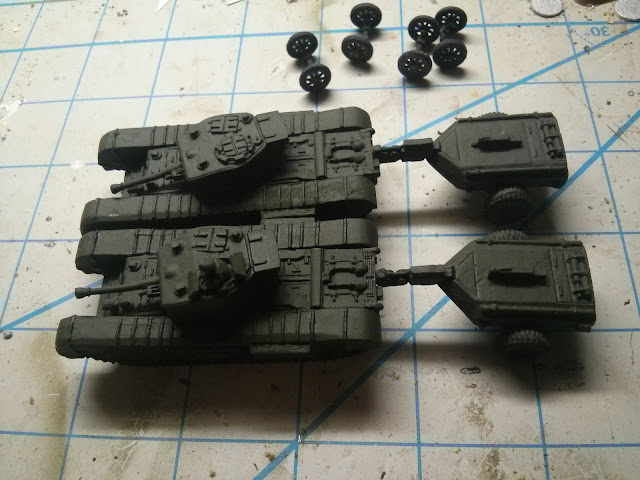 It turns out the Confident Trained (urk) 29th Infantry Division in Overlord has the option to ally in 2 or 3 Churchill Crocodile tanks. My FLGS had one (and I had store credit to get it), so I figured why the hell not, let's see how they do. That front armor of 13 is deeelightful! I did pin the trailer to the tank, using a dull bit in my pin vise and a nail for the pin. It's so sturdy I can pick them up by the tank and the (metal) fuel trailer stays on. Great success! 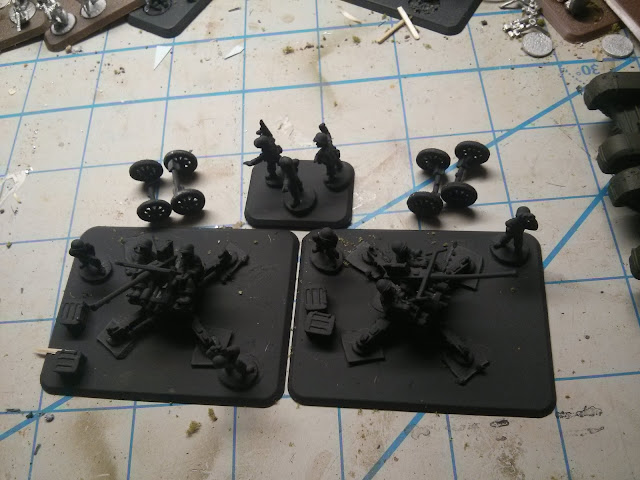 M1 Bofors for my Americans! They aren't the big bad 90mm gun capable of bombardments, but with trucks to move them around I get some flexibility. I see these less to shoot down aircraft and more to nuke my opponent's halftracks. Also, for 45 points they're a steal. 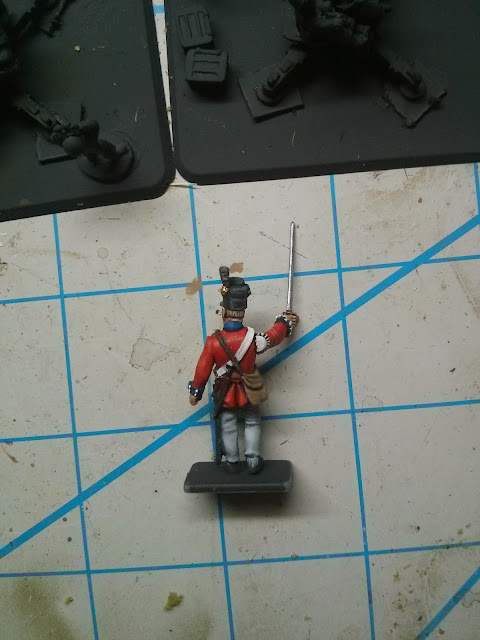 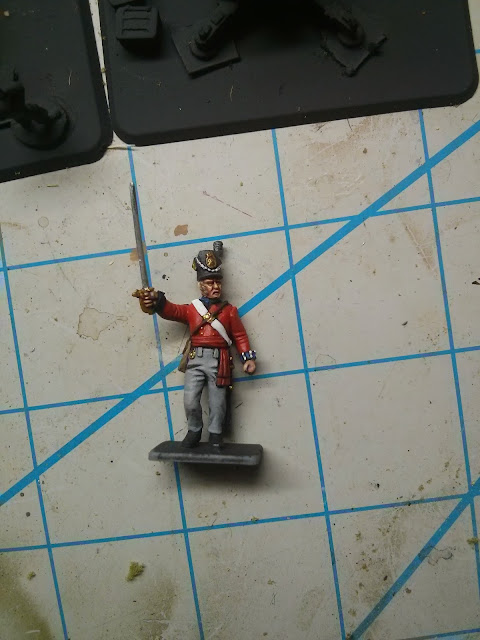 Yes, I'm now dipping into Napoleonics! I ordered a box of the Victrix Center Line Company and I am blown away by the quality of the kit. More on that once I get everyone built and painted. I couldn't resist building an officer and trying out the paint scheme. I haven't painted 28mm in quite a while, so this was a nice change. 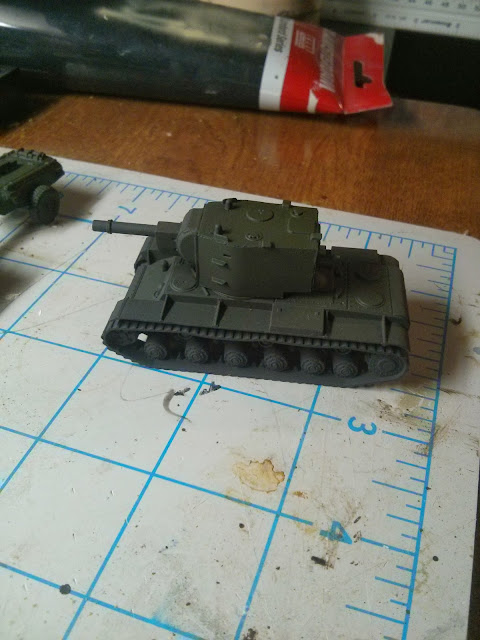 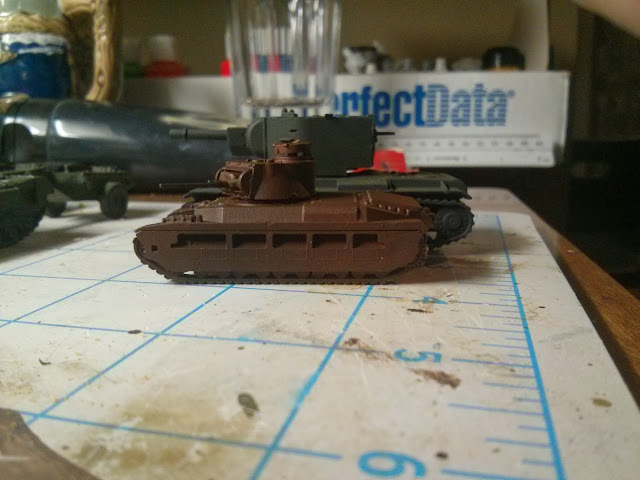 A KV-2 and a Matilda are the "for fun" bits of my Christmas shopping for myself. I have a list for FoW with tons of Matildas for the hell of it, and I wanted to see how the Zvezda kit for it was. Like the KV-1, I'm a big fan. The KV-2 was a bit trickier. The turret is a main piece, two side panels, a rear panel, and a top panel. They don't fit snugly together so there are some gaps, but what can you do (filler, sand, paint over it, clearly). I got it because it's a great big dumb tank and I love the KV-2 for that. It's just too fun to pass up. Even at 15mm this thing is massive, so I might try my hand at color modulation or weathering. There's just so much space to work with!

That's all I have for today. I'm almost sorta settling into a routine with my classes, so I hope to be more regular with the hobby. WIP pictures are one thing, but I know everyone loves seeing the end result.
Labels: Americans Battlefront Flames of War Napoleonics Soviet tanks the poor bloody infantry