Days of Glory came out in 2006, and is a French language film with subtitles, so if that puts you off, DO NOT LET IT! It's a great war film on a subject that is not really widely known outside of France and even then not really mentioned. 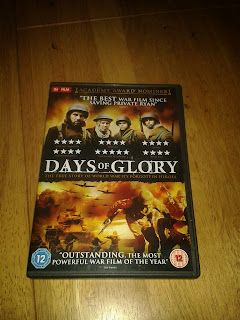 The film deals with the discriminatory treatment of North African soldiers serving in the Free French Forces during the Second World War. The film's release contributed to a partial recognition of the pension rights of soldiers from the former French colonies by the French government.
It focuses on a group of Goumiers.  Algerian and Moroccan soldiers fighting for France.


Goum Fact - In French military terminology, a goum was a unit of 200 auxiliaries. Three or four goums made up a Tabor. An engine or groupe was composed of three tabors. A goum in this case was the equivalent of a company in regular military units and a tabor would thereby be equivalent to a battalion. A tabor was the largest permanent Goumier unit. 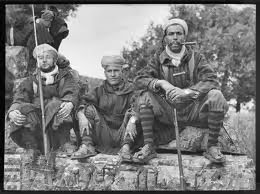 The movie is set in Algeria, 1943, through Italy to Alsace in France in early 1945. Arabs volunteer to fight Nazis to liberate France, their motherland. We follow Saïd, a volunteer and orderly for sergeant, Martinez, a pied noir (referring to people of French and other European ancestry who lived in French North Africa),  Messaoud, a marksmen, and Abdelkader, a corporal and a budding intellectual seeing the prejudices against his himself and his fellow native troops. The men fight with courage against a backdrop of small and large indignities: French soldiers get better food, time for leave, and promotions. Is the famous  promise of liberty, equality, and fraternity hollow? or only good when it suits. I do not want to give too much of the plot away, just pick it up, enjoy it. 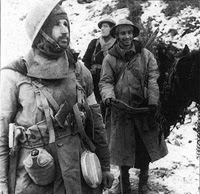 There are some good battle scenes in the movie, taking a hill in Italy, down to a great skirmish in a French village. The film is worth seeing if your a war fan, it takes a subject not well known and opens your eyes to it.  After watching it I wanted to do an army of these guys! Which is fortunate since those lovely people at Battlefront do models! 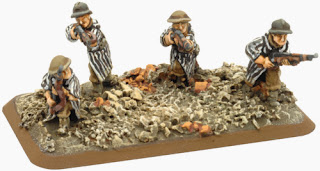 And they have lists as well! Those models in such striking tribal dress would look stunning on the table 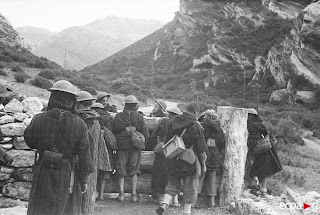 Goum Fact - the word originated in the Maghrebi-Arabic word Koum (قوم), which means "people". The non-specific designation "Goumi" (French version "Goumier") was used to circumvent tribal distinctions and enable volunteers from different regions to serve together in mixed units for a "common" cause. 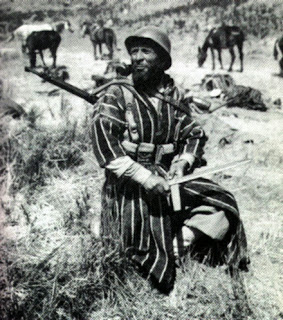 
Morgan Says - What a stupendous film! The subject of how the Goum were treated during and after the war is rather poignant. This isn't a film just to entertain, it's to inform. One of my favorite moments: when they loot the body of a German soldier and they pull out his wallet, which is a sublime touch. Day of Glory isn't an action-thriller, even though there is a fair amount of fighting with the Germans. Most of the film, however, is character development and exploration of how the French saw their colonial troops. Not bad for an independent film.
Labels: Film reference review