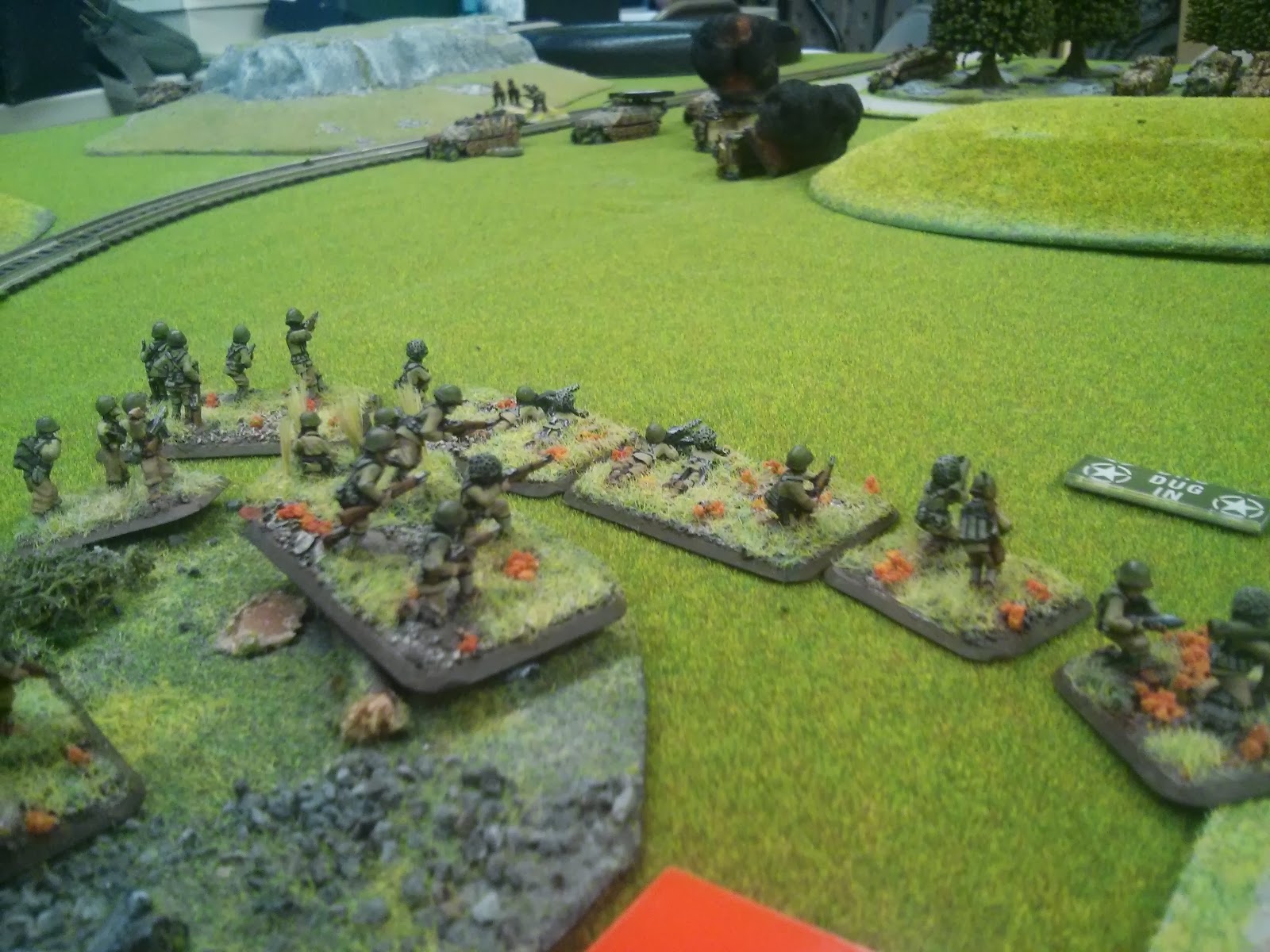 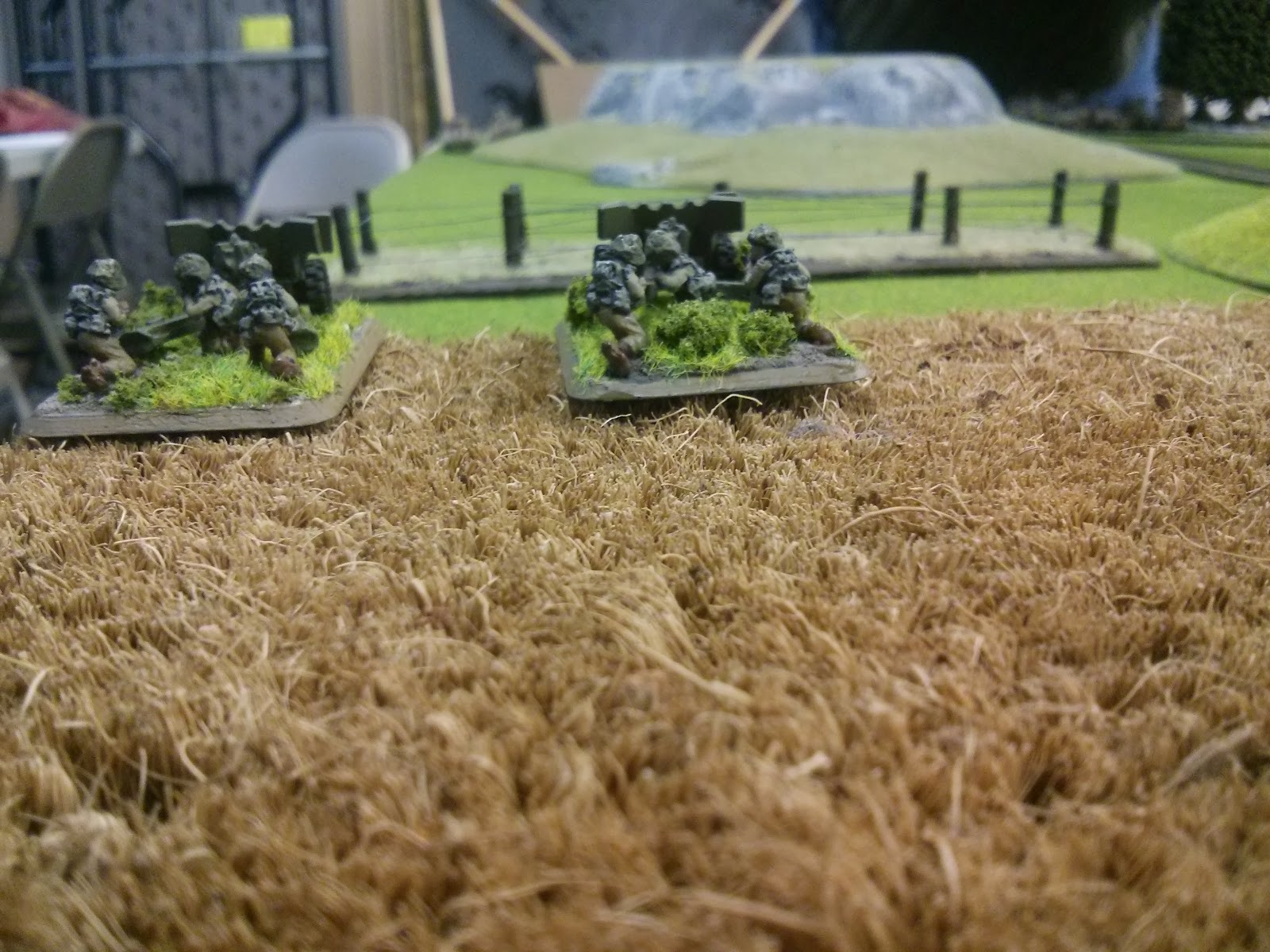 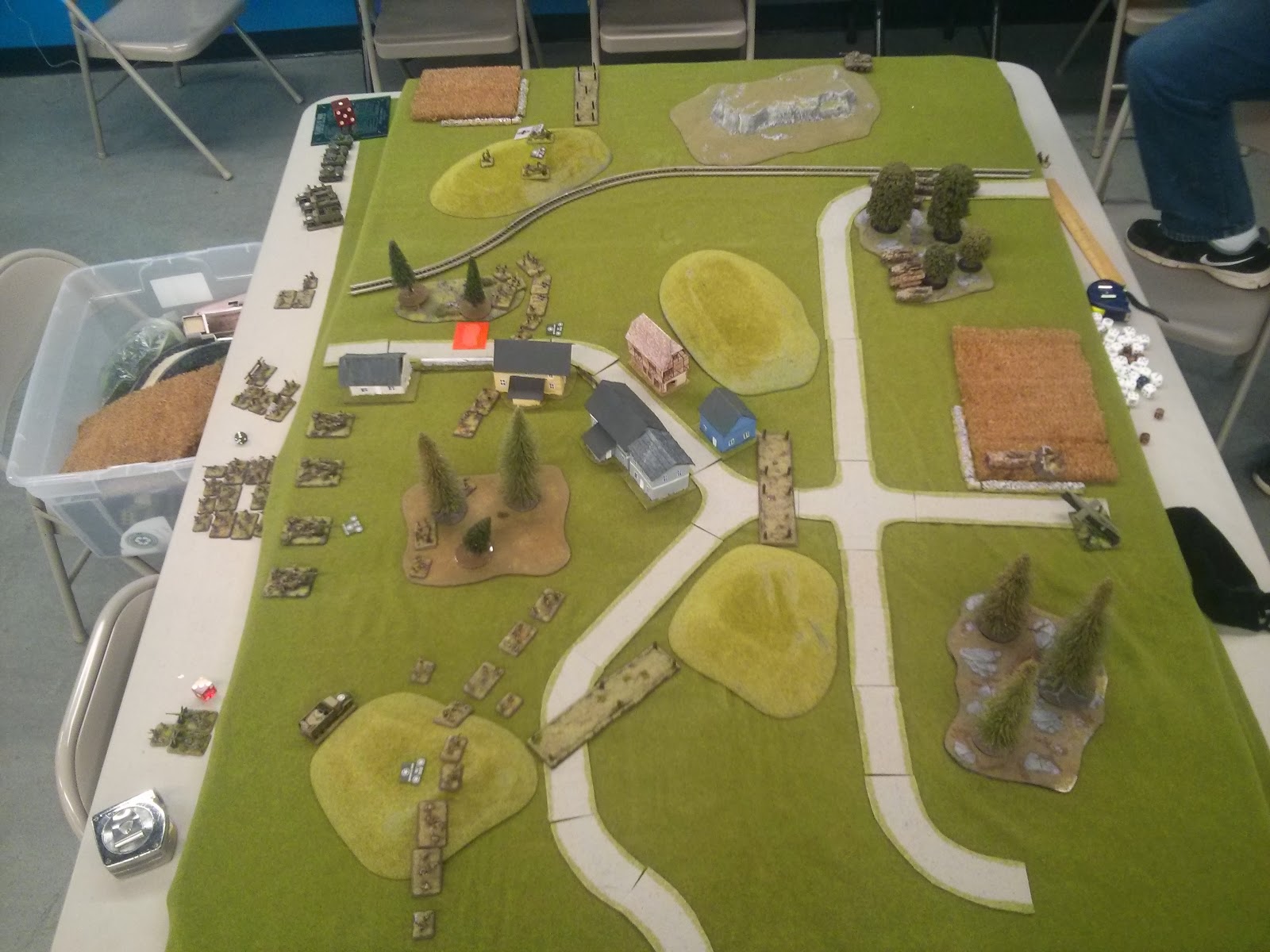 Alternate title: Morgan makes mistakes! My opponent got the Desperate Measures book and gave a Panzergrenadier list out of it a whirl. Confident Veteran. I took the Confident Veteran Big Red One from the Overlord book. The mission was... I forget! I do know he had two objectives on my side of the board and I had one on his. Hasty attack, maybe.

That bunch of halftracks in the woods are the ones that tote Pak40s. He hates my Dug In infantry, so the 3+ firepower on those guns appealed to him.

I place my immediate ambush: two 57mm AT guns in the what fields staring down the barrel of a Pak40 Puma and a 20mm cannon Puma. Grand? Rudel comes in, and at this point I didn't have any anti-aircraft. Fun... 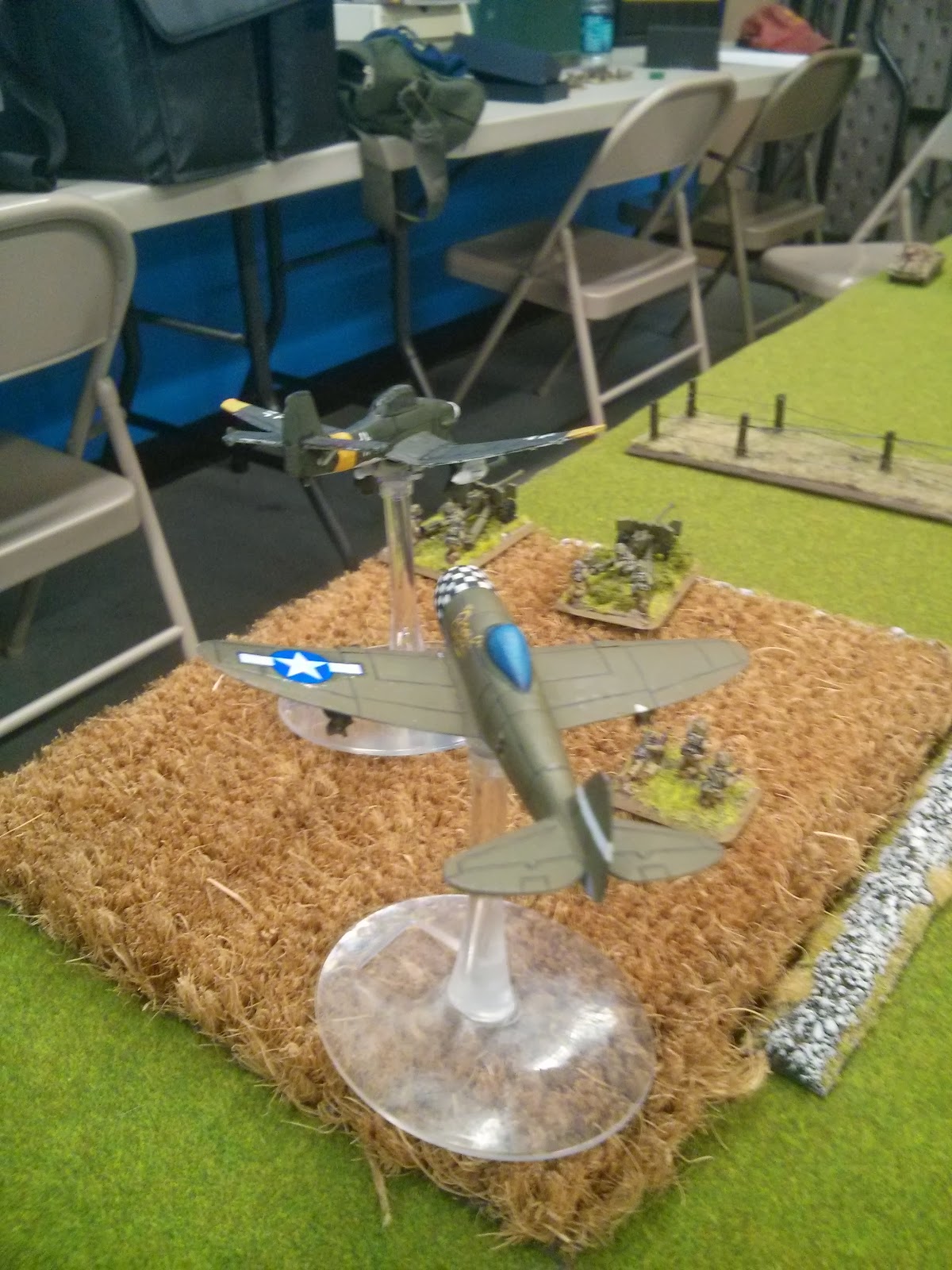 Return fire is less than spectacular.

Things temporarily swing in my favor. I got Time on Target off with my 105mm guns. He made his morale check for the halftracks and the ones that aren't destroyed still have dudes in there. Hrm... Aircraft weren't particularly effective, not killing his 2iC. I have pretty rotten luck getting more than 1 plane per flight.

In a bid to take my objective, I load my Engineers in their trucks and move 'em forward! Only to be nuked by another 2-Puma platoon with big nasty guns on them. Turns out if you destroy an Unarmored Transport vehicle, the rest of the platoon's transports are immediately sent to the rear and Destroyed. Seems a bit much, really. What's the point, then? They only need to fail a 5+ save and then boom, got 'em. I probably won't take unarmored transports again. Rudel comes in and scores an AT gun. Great! I lose my other platoon of 57mm guns to Pak40 fire, and Jim's Panzerwerfers arrive.

On my turn, one kill! The Pak40 is still up and healthy, but stays Bailed Out for another turn. Note the trend on the planes, eh? I failed to Range In.

Jim and I have begun to start using Smoke bombardments a lot more recently. I'm starting to see the value in 4-stand mortar platoons to get two templates worth of smoke. I had deployed like a proper idiot so my artillery observer and my CiC were both under the smoke. This helped Jim a ton, as I rely on my artillery a lot for long-ranged punishment.

Halftrack swarm! I hate the damn things. Although just last game we realized that we were treating them in assualts incorrectly, where you can only throw the halftracks into an assault if 1. you're German and 2. there are stands in them. My poor Engineers slough forward under fire, losing the occasional stand.

Just two stands protecting the objective from the German horde!

Let's see, with the Smoke I'm Concealed and Gone to Ground, so with Veteran you need 6's to hit...

And you got 'em. Incredible rolling!

As it presently stands. By this point I know I have lost, and my only hope is for my engineers to take their objective. I did have reserves (Stuarts, another Rifle Platoon), but Delayed Reserves... infuriates me. I don't start getting Reserves until Turn 6. If I could play missions without Delayed Reserves for the rest of my FoW games I would be a happy guy.

Reserves! Poor bastards. My Engineers and their bazookas manage to Bail Out a Puna. Startling effective!

Artillery and all his halftracks and MG Panzergrens...

Last ditch reserves! While this is happening my Engineers are lining up for an assault on the Pumas. Another flight of one plane tries to make a difference.

At this point I gave up any hope of winning, so these poor Stuarts are about the charge headlong into lots of Pak40 fire... here comes the other Rifle platoon to see if they can do anything against those Pak40 halftracks. 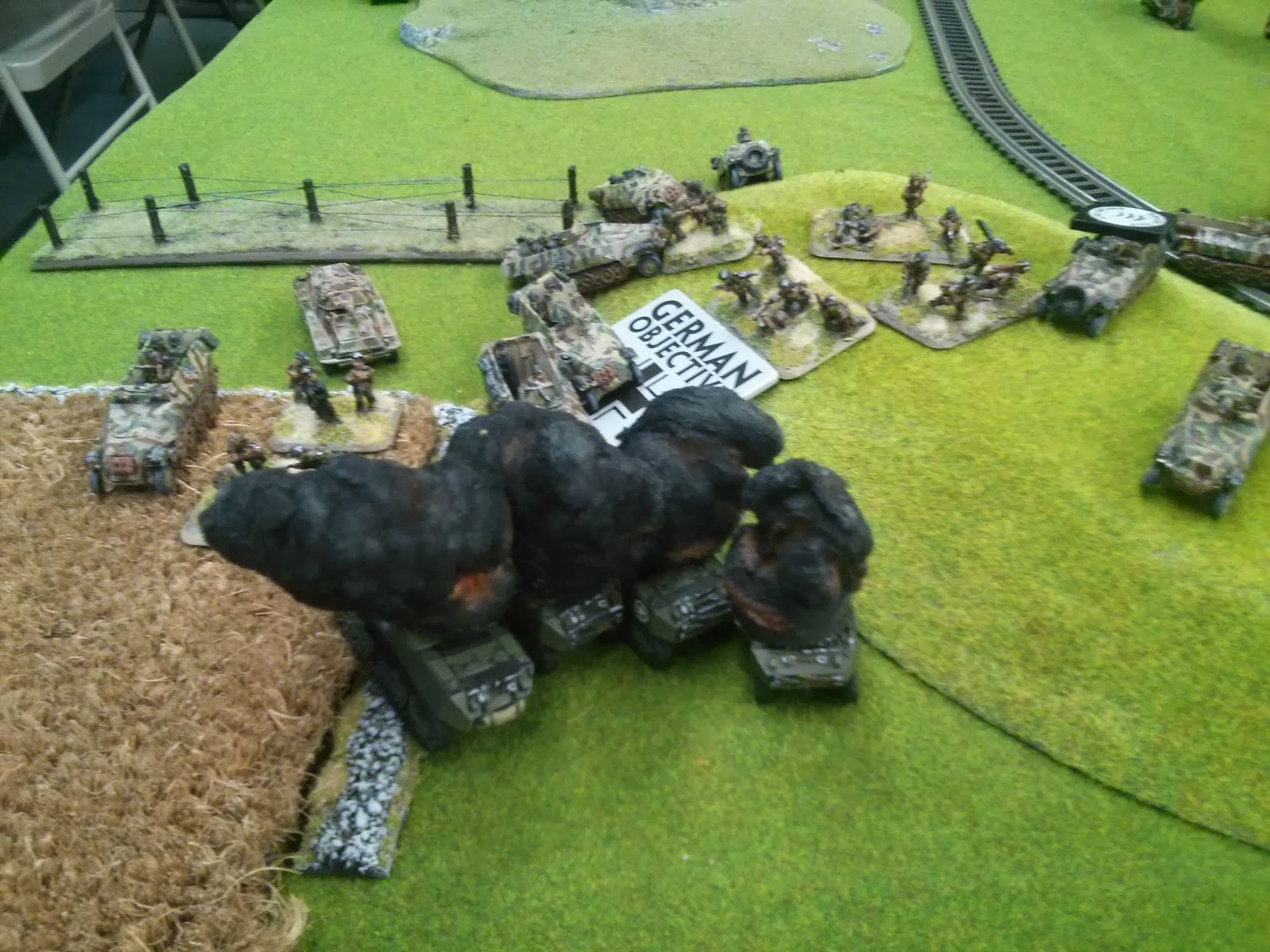 With my Stuarts destroyed, and my Rifle platoon too far off and blocked by halftracks (damn them!!!), the game went to Jim. I wish it had more challenging of a win!

Things I could have helped:
-Not using unarmored transports. What hunks of junk.
-Deploying my observers more spaced out so they don't all get smoked.
-Take a 3-gun platoon of 57mm's instead of two 2-gun platoons.
-Put more infantry on the table!
-Have more long ranged AT, or anti-halftrack!
-Place your barbed wire better, dummy! No gaps means no halftracks.

Things I can't have helped:
-Delayed Reserves, they always leave a sour taste in my mouth.
-Scattered Reserves, because the rules aren't clear. If I roll a 3-4, does that mean I can place them anywhere on my long edge, or do they measure from the center of the board?