The Scorpion attack fighters are in the ship yard on Romulus today as we look at how we can outfit them best for battle.  As always the same rules apply, no more then 50 points, and only using the cards that came in the pack as well so you never need to worry about where they may have come from. 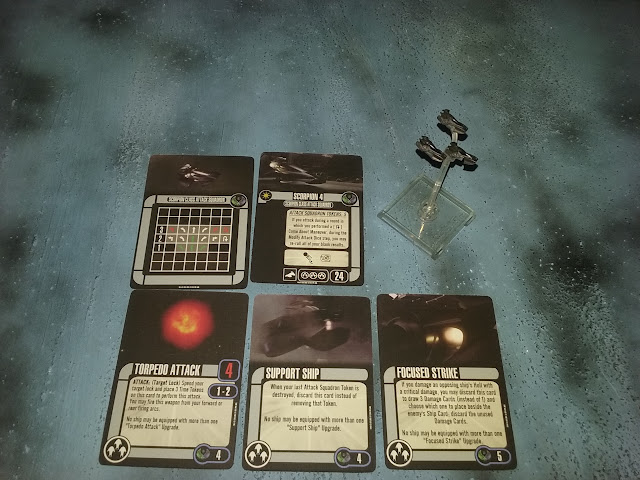 Here's the cards used, so lets look a bit more in depth about what I have picked, and what uses the fighters can perform. 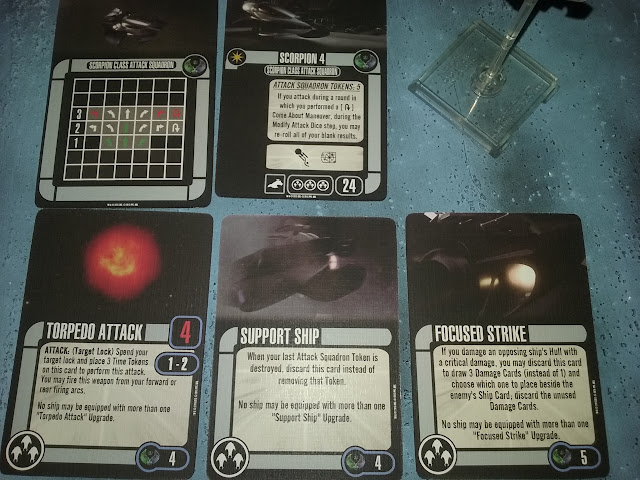 I started with the named fighters of course, as its ability to re-roll blanks after a come about is great, and will help pile on the hits.  Torpedo attack is there to add some firepower from the rear arc, that hits hard in case its needed.  Support Ship means the fighters can take an extra hit, keeping them in the fight longer, so was an auto include.  Focused Strike will let me pick the critical effect I want to happen out of three options so I can choose the best to reflect the battles circumstances, I may even be lucky and draw a warp core breach!

These ships are nimble, have good fire power and can take a beating due to the fact fighters only lose one card regardless of how hard you hit them in one attack, so they will last.  They are more then capable of going in with your big ships, or swinging in from the side, you just have to remember these are not as fast as most of your ships, so take that into account when moving, and the most important thing have fun with a different kind of model to the normal ships.

All in all though a solid addition to the Romulan Fleet.