As many of you readers know I love history, and what some of you may not know, but my long suffering wife does is i love military aviation.  Years spent building Airfix (and other manufacturers) model kits as a youngling, trips to the imperial War musuem, Duxford, Manston, Biggin Hill and Hawkinge airbase museums and airshows.  Hours of pouring over books on planes, and hanging them from my ceiling (not now, the Wife wouldn't have it), and my Grandfather having flown Hawker Typhoons has just let me with a deep love of aviation.  I did have models of all these planes hanging from my ceiling as a youngling, so the chance to actually play with them (instead of just making noises and running around with them, which is still acceptable) was too good a thing to resist.

wings of Glory has its own boxed set that contains the full rules, but no planes.  It has a lot of extra bits in there, different decks for running bombers, and 2 seater recon/fighters, different  damage decks to reflect how different planes where armed.  The duel packs though are a taster of the game, and an ideal introduction.


A pack for beginners with two miniatures at 1/144 scale, fully assembled and fully painted and all the rules needed to start and to go deeper into the system: both Basic and Standard rules are included, plus several scenarios and special rules to go with them (both for trench cards and for AA machineguns). 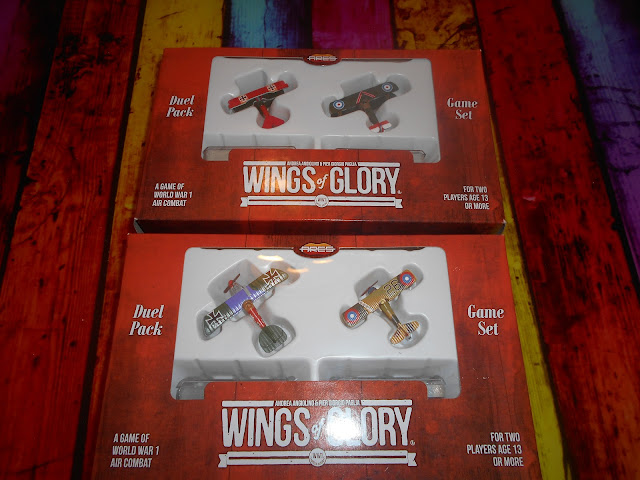 - one with Richthofen's Fokker Dr.I and Brown's Sopwith Camel;

- one with Paul Bäumer's D.Va and Frank Luke's SPAD XIII. 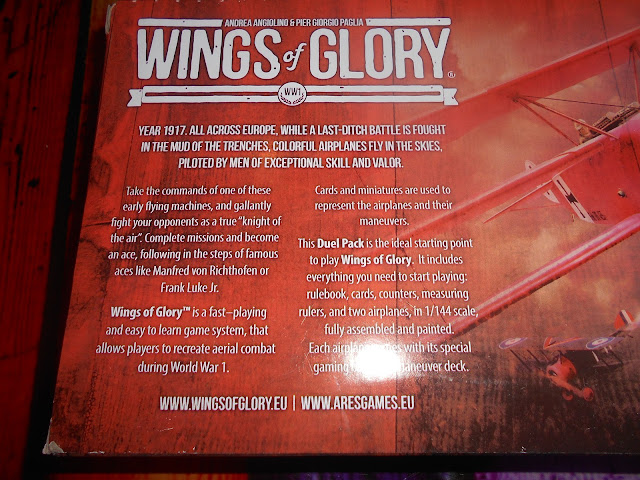 The game uses the original flightpath system, which so many other games Xwing, Attack wing etc have used, but instead of dials you have cards which allow for a larger diversity of moves. 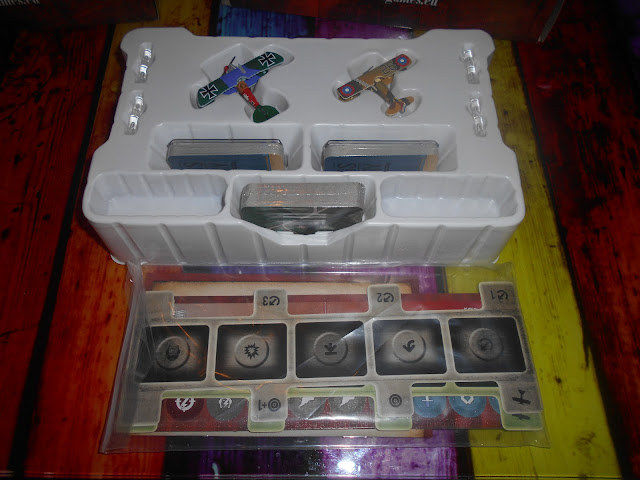 First thing you will see it the 2 planes, already prepainted, very nice, but we will get to them later. 3 decks of cards, which are one maneuver deck for each plane, and its plastic base, and the damage deck with some scenario cards.  Then a bag filled with card, so lets open that bag up. 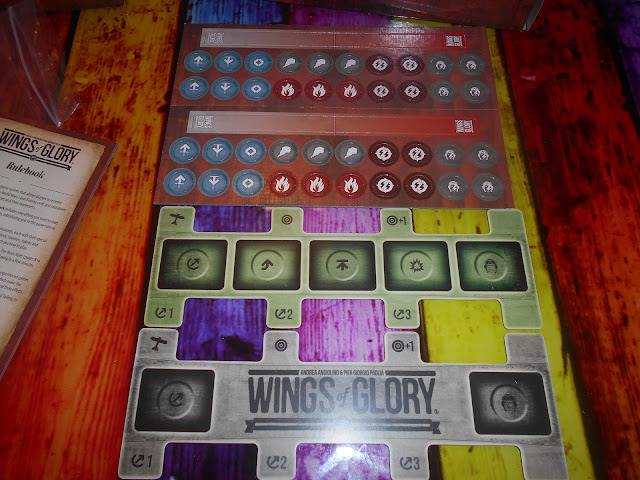 inside ther are two sheets of tokens, these mark effects that could happen to your plane, thingd from wounded pilot, fire, smoke, jammed guns, and movement reminder tokens. 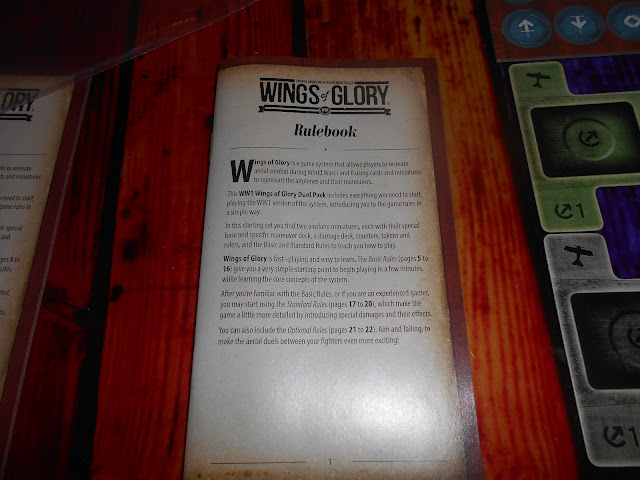 Then onto the rulebook, its not very big, but it is very easy to read, and well laid out, with plenty of diagrams where needed, and some nice optional rules should you wish to add them in. 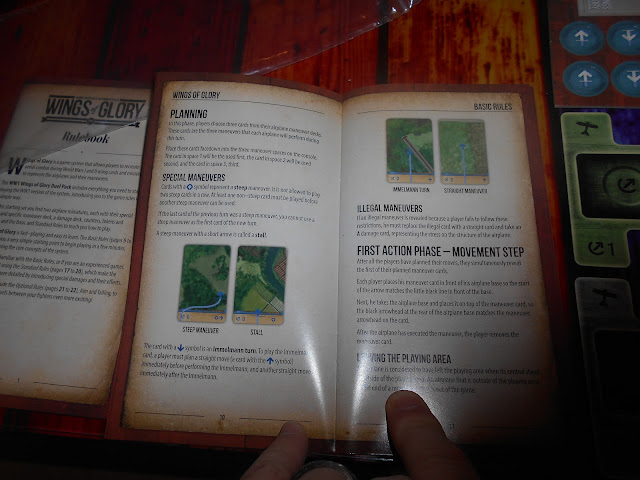 Sceanrios! i love it when games include them, and this has a nice selection that can be played purely out of this duel pack, involving, bombing/strafing runs, or photo recon of objective cards that are included. 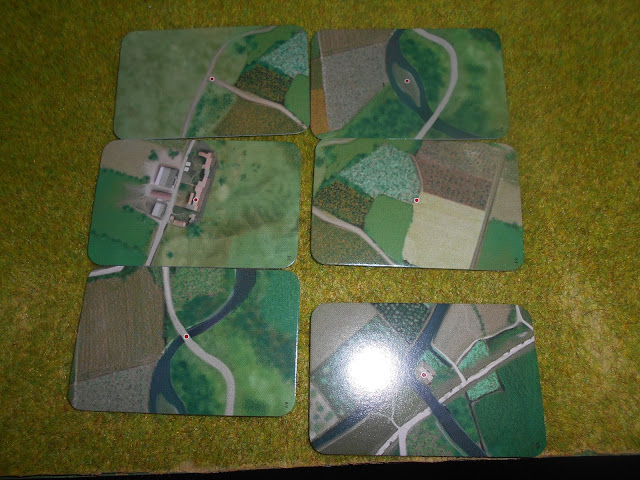 The objective cards are nice, good art work, and add a nice mix to the game making you focus on more then just dogfighting.
Now the planes....... 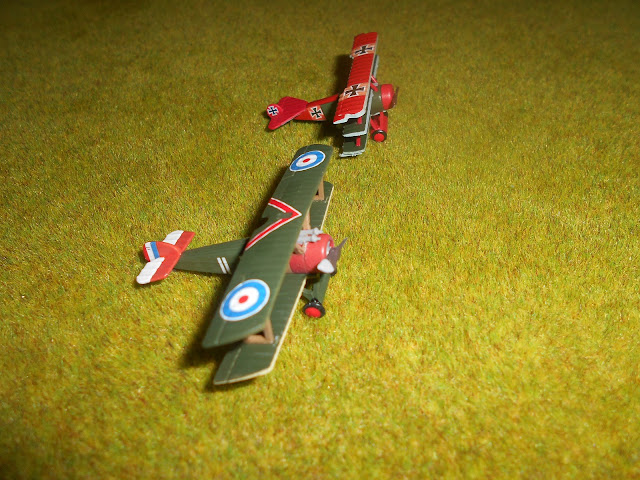 In the first pack we have the British Sopwith Camel, and the German Fokker DR1 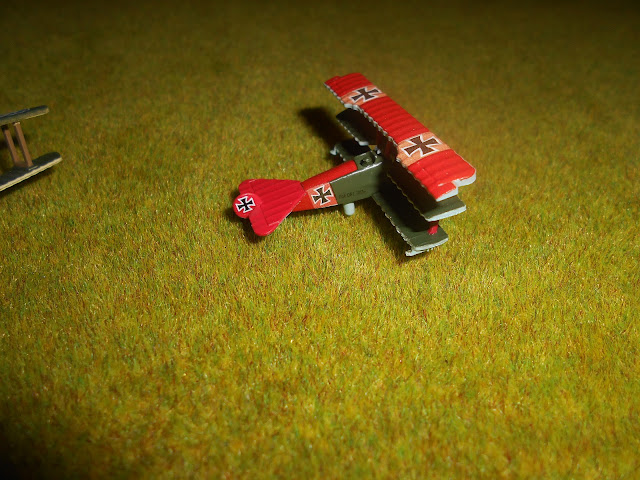 The models are really detailed, with a good paint job, and excellent detailed decal work 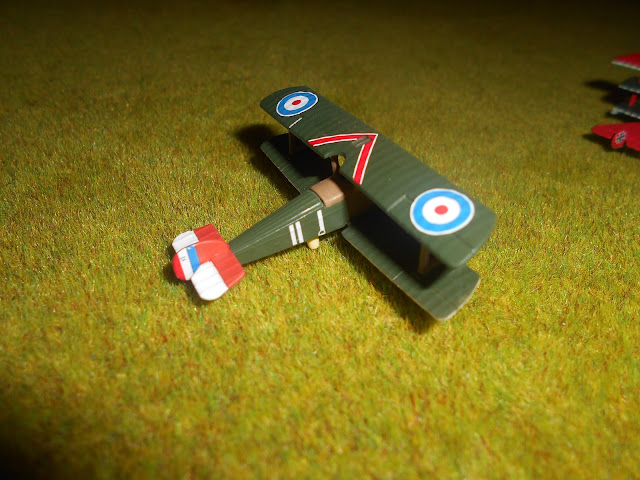 The Camel will be a great fun plane to fly, and is fairly nimble. 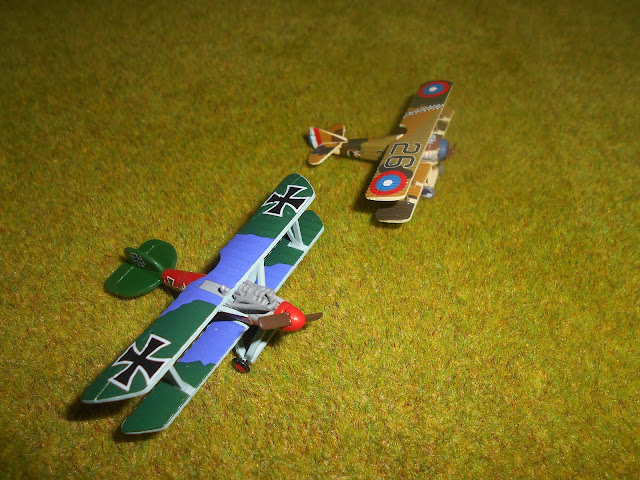 The big Albatross, and the Spad. 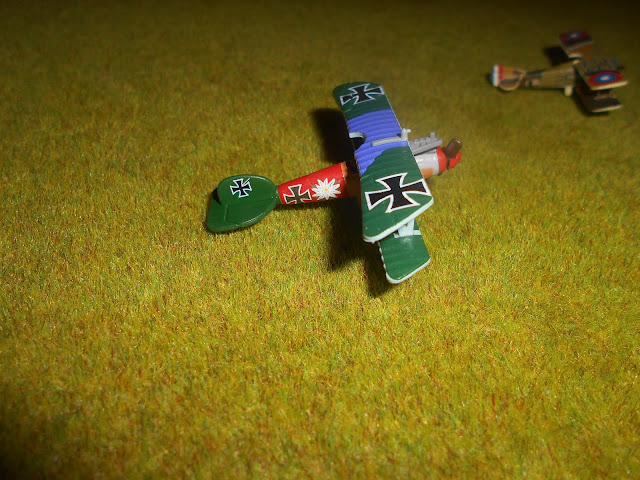 The albatross paint job is excellent, and yes it is in scale with the other planes, she was just a beast of a machine, not that nimble, so matches well with the SPAD. 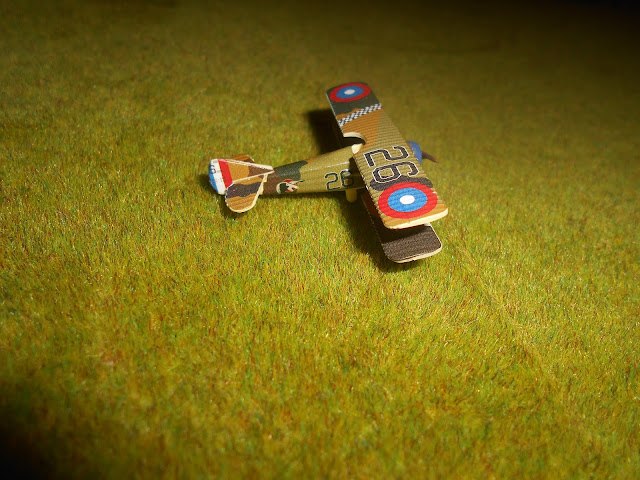 the SPAD is in American colours, and again, excellent work on the details and paint work. 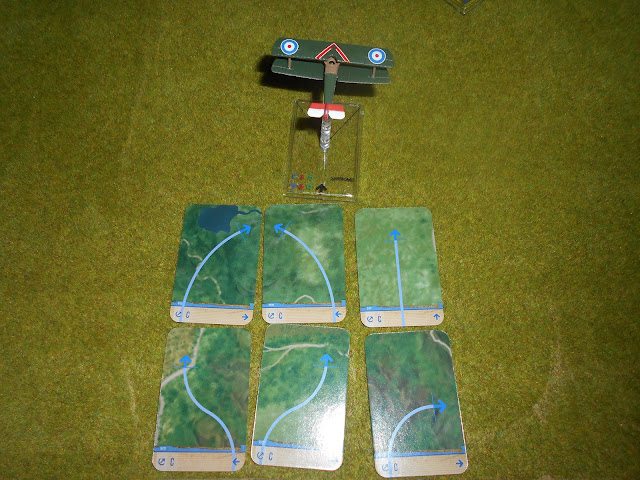 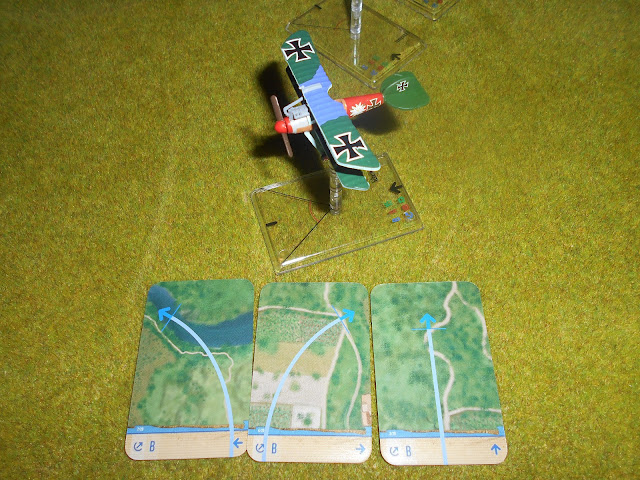 Each plane has their own deck for moving, which reflects how nimble and fast these planes where, these are just some examples of the moves available, but look at the camel, she doesn't turn well to the left, but can whip round super tight to the right, due to the effects of the rotary engine, so its excellent to see real history effect these, meaning if your opponent is an aviation fan, they can expect the camel to turn to her right as its quicker, but then knowing that your opponent expects it means you should.. ohh lets not go there!

The Albatross in comparison is fast, but no where near as nimble in a right turn. but then below we see the Fokker, which is super nimble, but not as fast as either of the other planes, so you will need to learn to fly to your planes strengths, and mitigate its weakness, as if you have a SPAD coming for you, yes you can out turn it easily, but she is faster and will catch up with you quickly. 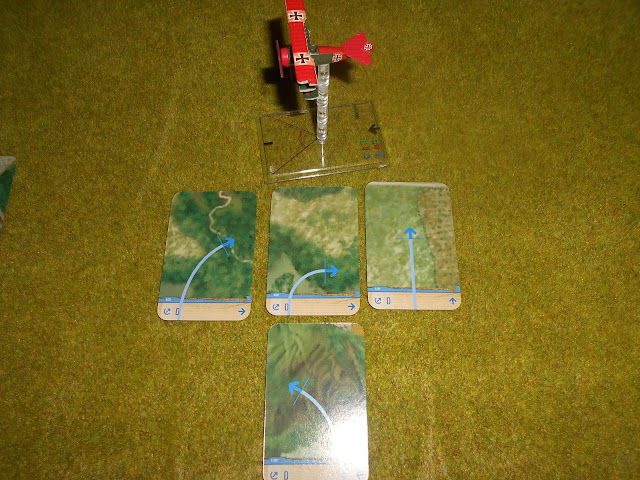 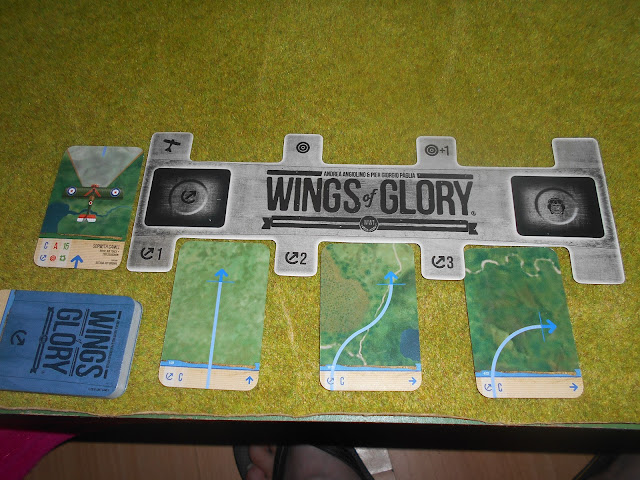 At the start of your turn, you pick out 3 moves, and lay them face down so your opponent cant see them, here of course they are face up so i can show how it works.  Then each phase you would perform your moves simultaneously, then check for firing arcs and range, if there was a firing solution as in in arc and range, shoot, otherwise, move to card 2, then repeat, then card 3, then start all over again loading up 3 cards.  At the top of your plane console are slots for special damage, and a move reminder, as some maneuvers such as the immleman  (come about, K-turn for Xwing/Attack wing players) can only be played after a straight move, and requires another straight move straight after. 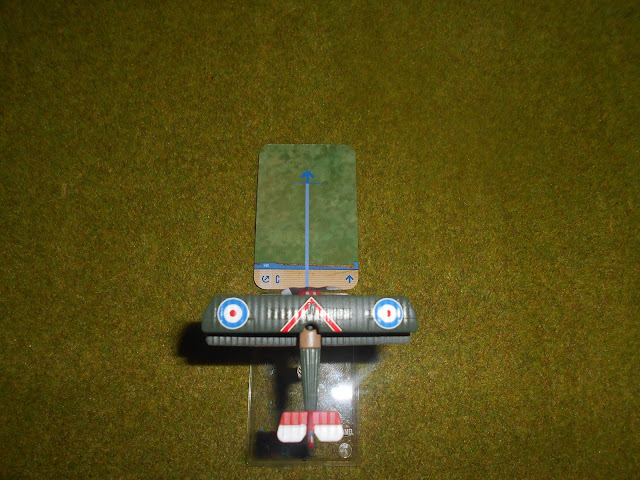 to perfrom your move, you lay down the card lining up the start of the arrow, with a mark on the base, then you pick your plane up and line up the arrows on the base and card. 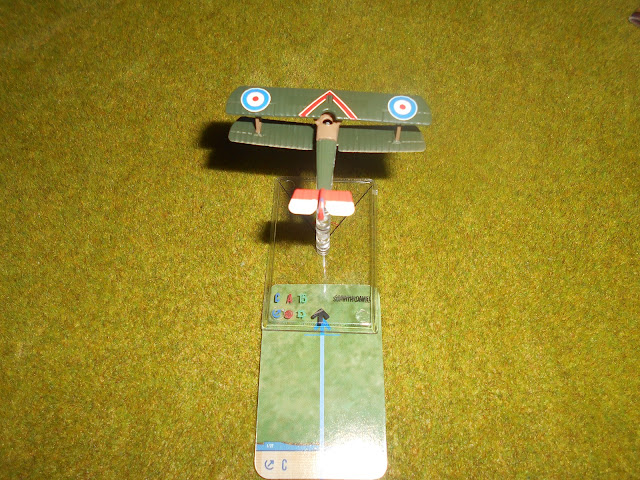 Then you take away your card and you have moved. its simple, and intuitive, and with cards compared to dials, you can start to plan your moves ahead easier, seeing how they link, and of course it allows much more variety then just dials.  The other information on the planes base shows the type of maneuver deck it uses, the damage deck it draws from, and how many damage points it can take before being shot down. 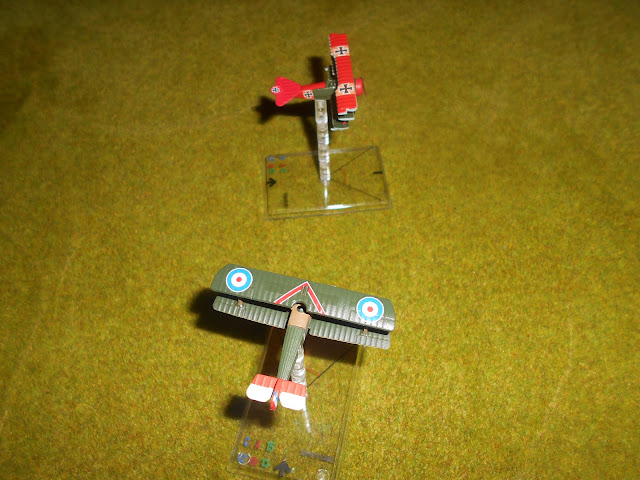 shooting happens after you move each phase, here we can see the Camel has go the Fokker clean in arc (the black lines on the base as you can see on fhte Fokker), and the Camel is out of arc for return fire too.  next we check range...... 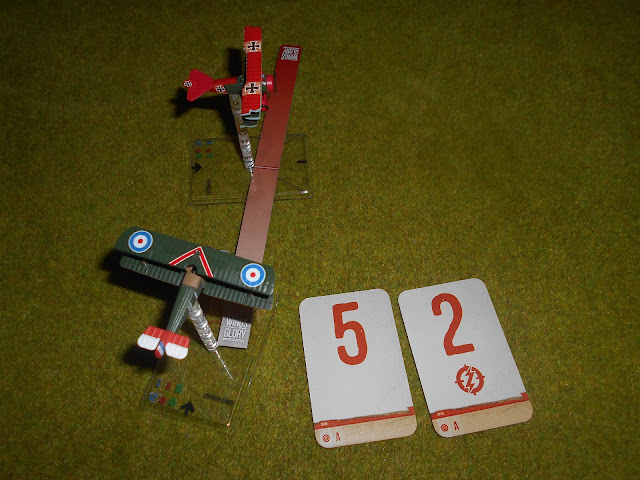 Using the Range rules in the duel sets, nicely there are 2 in each set so both players can have one, we see here the the Fokker is in close range, (there are only two ranges, normal, and close which is at the mid way marker or before) so at close range you draw two damage cards (normal range only one card)  These are given to your opponent face down so you can not see them, though of course here i had to show them.  The opponent then adds any effects on the cards such as damaged rudder, wounded pilot, fire etc, some of which they have to declare, some they dont! like damaged rudder.  Here the Camel hits the fokker hard for 5, and then 2, though does jam its guns in the process, so the opponent would inform me my guns are jammed, or hide the number and show me the effect.  When the total damage number equals your planes structure value you are shot down.  I love how you never know what condition your enemy is in, you could drawn really low, or even blanks, or you could be sat on one single damage point to bring down a plane that is already crippled.  A really nice idea to keep it exciting. 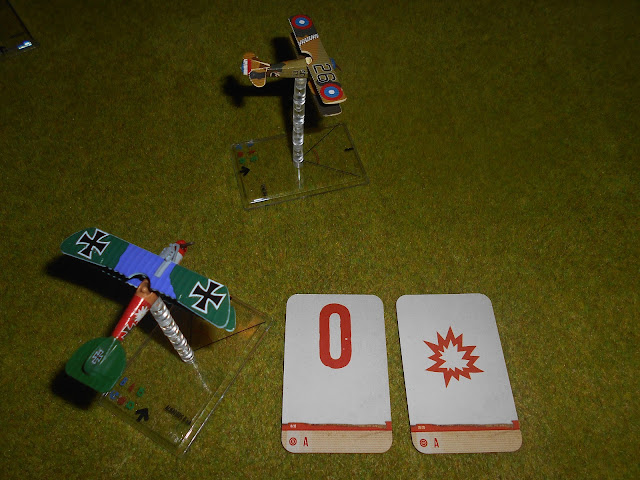 Here the SPAD gets a close range dose from the Albatross, and one card is 0 damage, the other is an explosion, which is instant destruction, so the albatross has put a lucky round into the fuel tank and blown the SPAD straight from the sky, these are very limited in the deck, so will not come up that oftern which is good! 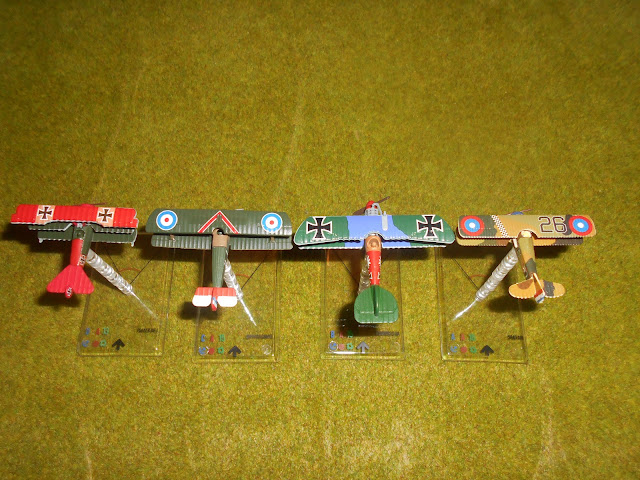 You do not need both duel packs, but combined it gives you all need to run 2 German fighters, and 2 allied fighters and get some 2-4 player games in with one controlling 2 planes, or 1 plane a person, keeping it moving fast, and fun. 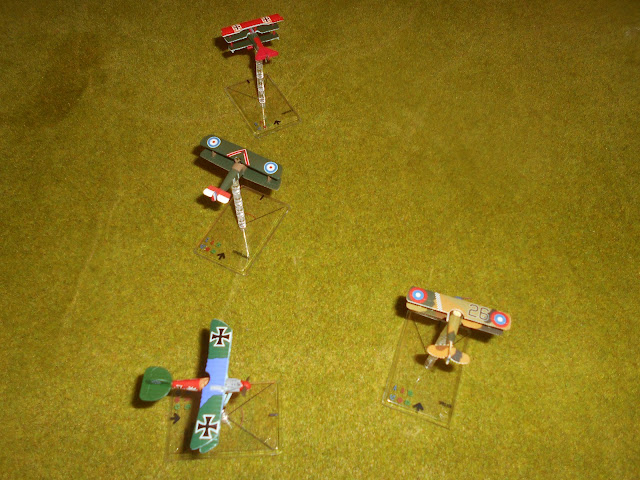 The game is fast, and fun, and has some different levels it can be played at straight from the box, allowing altitude to come into it, with diving and climbing moves, moves like tailing our opponent can be added from the advanced rules, that give you a maneuver advantage.

Its a great game, its fun, the models are nice, but there is a lot of tactical depth to it to out think your opponent, and have fun with the beautiful models.  Its excellent, and im looking forward to getting more planes, and some two seaters and some bombers and.. well you get the idea.  Though to add those things i will need the rules and accessories pack that has more rules for all sorts of things in it, and other damage decks i may need.

i like it, its like other games i play so its not too hard to learn at all, its just making sure i use the cards right.  I like the colourful planes, and i liked learning more about WW1 as we are learning about it in school.

Olivia made a good point about the history part, when we play Star Trek, or Xwing, these are just spaceships zipping around, but these delicate machines where really flown a hundred years ago, with brave men and no parachutes.  There where times the average life expectancy of a British pilot arriving at the front was around 48 hours, often less at times.  With all the memorials and honouring of the first world war service personnel over a 100 years ago now, lets not forget these brave men on both sides, flying a new technology with no hope of escape apart from a quick death if they caught fire, or where shot down or just had a mechanical failure, as flight was still in its infancy, and these machines pushed the boundaries of technology and men at the time.

With an RRP of £23.99 per pack head over to your Local store and pick up a pack, or both, and with a large range of expansion aircraft available you can get the airwar in miniature going on in your games room, or front room table, or floor, or anywhere.